In National Treasure, America’s founding fathers were the guardians of a secret treasure stash. In the Men In Black films, Elvis, Steven Spielberg and Sylvester Stallone (who is coincidentally planning his own Poe biopic) are aliens. The Brothers Grimm fought mythical monsters. Here, Edgar Allan Poe is roped in by Baltimore’s finest to solve a series of murders based on his stories. This may not seem as impressive, but taking into account the legendary author’s dark imagination and famously macabre stories, the crimes are pretty gruesome. This is the guy credited with the creation of the modern horror and detective stories, after all.

There is tremendous potential in the idea of Poe pitted against a killer who takes direct inspiration from his tales. Unfortunately, most of it is squandered in favour of unsophisticated slasher movie fare. “People love blood and murder”, Reynolds (Kevin R McNally) the newspaper editor tells Poe. And in that respect, the movie delivers – the most gruesome murder happens relatively early on in the movie, where the victim is cut in half by a lowering bladed pendulum, something out of a Saw film – though Poe did it first in The Pit and the Pendulum.
Problem is, more people are likely to have a Saw film than read Poe’s story.

John Cusack’s Poe is quite a disappointment. He’s portrayed as the typical eccentric artist, and there’s no mystique or danger, especially given the enigma the real Poe was. Cusack also doesn’t fit into the period surroundings at all; one would half expect him to lift a ghetto blaster over his head. At its worst, it brings to mind Nicolas Cage – not a good thing.

Inspector Fields, as played by Luke Evans, is earnest, hardworking, dedicated – and absolutely one-note and boring. The interesting dynamic that might have existed between the author and the policeman is all but absent. The inclusion of Alice Eve as Emily Hamilton, a love interest for Poe, is done rather lazily, considering that he had a wife but was famously asexual and apparently only loved her platonically. But that would have been too difficult to portray and would have gotten in the way of the pulpy thrills now, wouldn’t it? And so, she’s quickly put in jeopardy as a motivator for Poe, and to force Poe and her disapproving father (Brendan Gleeson) to work together.

When the identity of the killer is revealed, it is more likely to induce an indifferent “meh” as opposed to the desired “gasp!” And that’s the cardinal sin when it comes to whodunits. Director James McTeigue also delights in heavy-handed faux-symbolism – just because the title of the movie is “The Raven” doesn’t mean one or more of the birds have to flutter into frame in every other scene. However, the art direction and the re-creation of 19th Century Baltimore are generally pretty good.
So, this is pretty much average Poe.

PS: I take offense to the newspaper editor dismissing criticism (i.e. reviews) as “the easy stuff”.

SUMMARY: I’m no Poe, so the best I can come with is “you won’t be ravin’ about The Raven”. Hey, give me points for trying. After the 3-D re-release of Titanic comes more giant ships and another ‘berg (director Peter). I fondly remember playing the board game with my brother on boring Chinese New Year afternoons visiting my grandmother’s house. I also remember attempting to play the game on a plane and losing some pegs. I don’t it ever crossed my mind that the game would make a good movie, and as far as I remember, aliens weren't involved.

Alex Hopper (Kitsch), a 20-something ne'er do well, is forced to join the Navy by his older brother Stone (Skarsgard), after the former pulls a crazy stunt to win over the attractive Sam (Brooklyn Decker). Sam also happens to be the daughter of Admiral Shane (Neeson), Stone’s superior. Several years later, Alex has become a lieutenant aboard the USS John Paul Jones, and is about to seek permission from the Admiral for his daughter’s hand in marriage.

While Alex and Stone, serving on different ships, participate in the RIMPAC naval exercise alongside the navies of countries across the world, alien ships land in the waters near Hawaii, as one crashes into Hong Kong. Having lost their communication equipment onboard the crashed ship, the aliens plan to hijack a NASA satellite array to call their home planet for reinforcements. Alex and co, including weapons specialist Petty Officer Raikes (Rihanna) and Japanese Captain Nagata (Tadanobu Asano) attempt to repel the invaders.

To draw another connection to Titanic, James Cameron has famously lambasted the film while it was in production stages, saying “we have a story crisis. Now they want to make the Battleship game into a film. This is pure desperation...Battleship. This degrades the cinema.” Many cynical moviegoers echoed this sentiment when the project was announced, but in the end, Battleship really isn’t all that bad compared to the mass-produced action movie garbage we get fed every summer. It isn’t all that good either, though.

Sure, it’s loud, silly and pretty generic, but Battleship isn’t all flotsam. For one, the film displays a hint of winking self-awareness, as if the screenwriters knew they were recruited to craft an audience-pleasing blockbuster and nothing more. There are attempts to reference the gameplay of the original board game, and the aliens use projectiles shaped like the pegs used in game. Apparently, Admiral Shane was supposed to say “you sunk my battleship”, but it was (wisely) left out of the final cut.

The visual effects are of high quality and fairly photo-realistic, but the alien invaders and their arsenal immediately bring to mind another Hasbro-product-based movie, and it’s not G.I. JOE. Bits and pieces seem like leftover animation from those films, but thankfully Peter Berg is much less of a hack than Michael Bay. The aliens themselves are amphibian-esque humanoids in Iron Man-style exo-suits, and employ “shredders”, circular saws on steroids, to rip through ships, highways and military bases. The main flaw in the design of the aliens is that they are far too humanoid and visually not very interesting. It would have more interesting if the movie revolved around naval strategy and pitted two rival fleets against each other rather than resorting to the extraterrestrial threat plot device.

As for the movie’s human cast, Taylor Kitsch is able to muster more charisma here than he did in John Carter, and is far better as a modern military man than a Civil War-era one. Alexander Skarsgard, best-known for TV’s True Blood and for being the son of Swedish actor Stellan, is also not bad as the serious, responsible big brother.

Liam Neeson has no problem furrowing his brow and barking commands, and Brooklyn Decker as his daughter delivers the performance one might expect from a swimsuit model, though slightly better than that of her peer Rosie Huntington-Whitely in last year’s ghastly Transformers: Dark of the Moon. There’s a nice subplot involving Sam stuck on Oahu with army combat veteran and double-amputee Mick Canales (Gregory D Gadson) and Cal (Hamish Linklater), the stock nerdy comic relief scientist.

Rihanna’s appearance is the product of nothing less than stunt casting. What, was Michelle Rodriguez otherwise occupied? The Barbadian singer seems incapable of pulling of the tough chick shtick, and it doesn’t get more unbelievable than the “Umbrella” singer playing a gun-toting weapons specialist. At least she doesn’t single-handedly ruin the movie, as she well could have.

SUMMARY: This dreadnought is not completely dreadful, but its hull isn’t watertight either – but it does have big guns and fires them often.

Jedd Jong
Posted by Jedd the Jedi at 9:23 AM 0 comments Thanks to Royston Loh, editor of F*** Magazine, for publishing my review of The Hunger Games in the April issue. 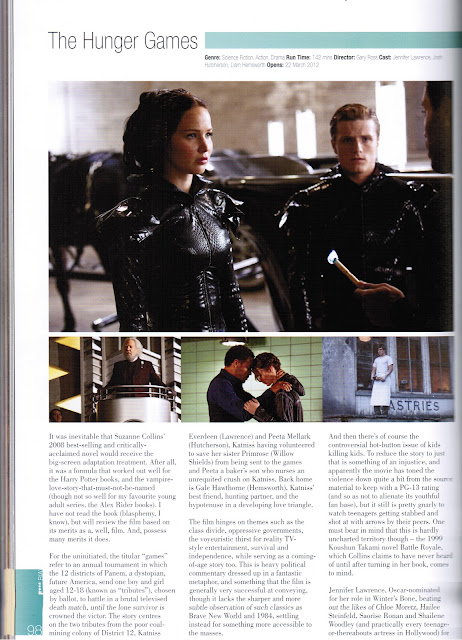 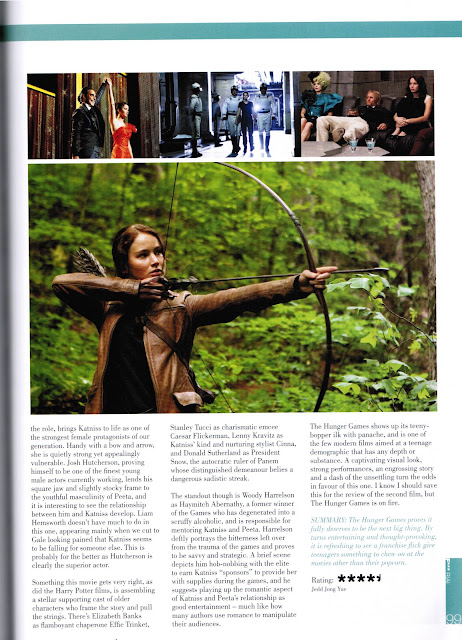