A good forty-ish years ago, few imagined that a sizeable portion of the world’s population would have a personal computer on their desk at home, let alone one in their purse or pocket. And yet here we are, with cell phones that also function as cameras, day planners, maps, compasses, media players and any number of other things. There’s even an “intelligent personal assistant” in the form of Apple Inc.’s Siri (who is aware of the existence of this film, and is not entirely fond of its portrayal of artificial intelligence, in case you were wondering). Writer-director Spike Jonze asks the question “Could you fall in love with Siri?” Okay, that doesn’t do this justice, so read on.

It is the not-too-distant future and Theodore Twombly (Phoenix) is a writer living and working in Los Angeles. He is employed at BeautifulHandwrittenLetters.com, where he helps clients express their feelings and emotions for someone in the form of computer-generated letters designed to look like the genuine article. Going through the final stages of divorce with his wife Catherine (Mara), Theodore is morose and lonely and gets himself the O.S. 1 – “It’s not just an operating system, it’s a consciousness”. The O.S. is configured into Samantha (Johansson): friendly, chirpy, helpful, efficient…one might almost forget she’s not a real person. Over time, this strange and wonderful relationship blossoms, and Theodore finds himself falling for his operating system and stops to consider the myriad implications of that possibility.

Like Jonze’s earlier works Being John Malkovich and Adaptation, Her is destined to be analysed, dissected and keenly examined by many a curious film student. Movies that fit this description tend to be impenetrable and inaccessible, functioning as examples of that maxim “true art is incomprehensible”. With Her, Jonze has crafted a film that doesn’t come across as lofty and high-falutin’. He has managed to marry a heartfelt tenderness with keen, astute social commentary, all wrapped up in a beautifully-photographed sci-fi package. 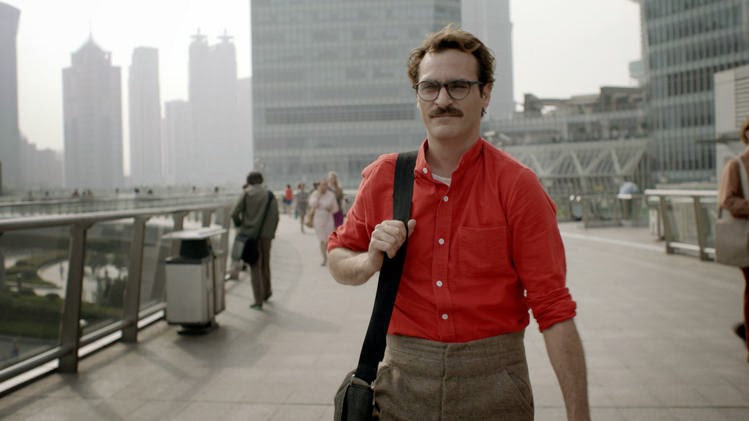 There are a flurry of thematic elements and ideas presented in Her. Has increased connectivity resulted in a lack of human connection? What constitutes a relationship? Can one enter into a romance with an intangible entity? Why do we need physical intimacy and does it matter from where it’s derived? Why do we try to emulate artifacts of a bygone era with the technology of today? Must we really conform to the roles society expects us to? Jonze doesn’t merely list them as this writer just has, he orders these thoughts elegantly, framing them within a well-realised near-future milieu created by production designer K. K. Barrett, costume designer Casey Storm, art director Austin Gorg and other crew members. It’s certainly more Shanghai than it is L.A., but there are delightful little design touches that ensure it’s “just futuristic enough”.

Praise has been lavished upon the performances in Her and it is well-deserved. Phoenix has gained a reputation as a capable, serious, extraordinarily intense and unpredictable performer, not your garden-variety movie star, as evidenced by incidences like his I’m Still Here social experiment/bizarre performance art piece. Here, Phoenix plays an everyman, Jonze refusing to turn Theodore into a stereotypical “loser” the way many other directors might. He is sweet, sympathetic, unsure of himself and still very wounded from the dissolution of his marriage. A lot of screen time is dedicated to close-ups of Phoenix’s face and seemingly inconsequential moments like a casual expression of being slightly disturbed during an off-kilter phone sex session are carefully realised by the actor. Theodore is not as unstable and discombobulated as the protagonists of Being John Malkovich and Adaptation, both artists like Theodore, but in Phoenix’s hands, he is by no means less interesting. 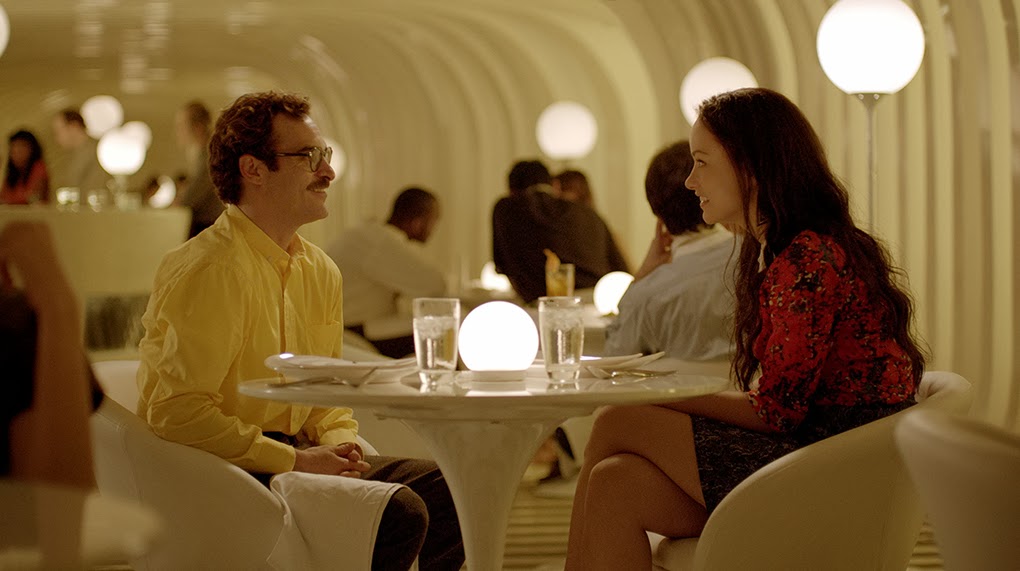 Johansson goes from being Black Widow to an amorous J.A.R.V.I.S., replacing the actress initially cast as Samantha, Samantha Morton. Johansson is known for her sexy voice, husky yet distinctly feminine, and with that voice and that voice alone, she gives one of the greatest performances of her career. Samantha comes across as cheerful, curious about the world, cheeky and playful, opening Theodore up to the simple joys of his existence, a ‘manic pixel dream girl’ if you will. However, Jonze in his writing and Johansson in her portrayal make Samantha far more than your average example of that trope, approaching “What is this thing you call love?” in the most compelling of ways and eventually subverting what might be an eye-roll-worthy character type. Show us a movie where Zooey Deschanel tangles with metaphysical transcendence.

The discussion of her eligibility come awards season can be seen as an extension of one of the themes in the film: does a voice-only performance qualify for an award as much any other type of performance?  Can an artificial construct ace the Turing test to the point where it’s indistinguishable from a person? There’s a crucial scene in the movie in which this idea is cleverly played with. The screen goes black, and for that brief period, it seems as if Samantha is physically interacting with Theodore as we can only hear both their voices and the chemistry they generate together is through the roof. 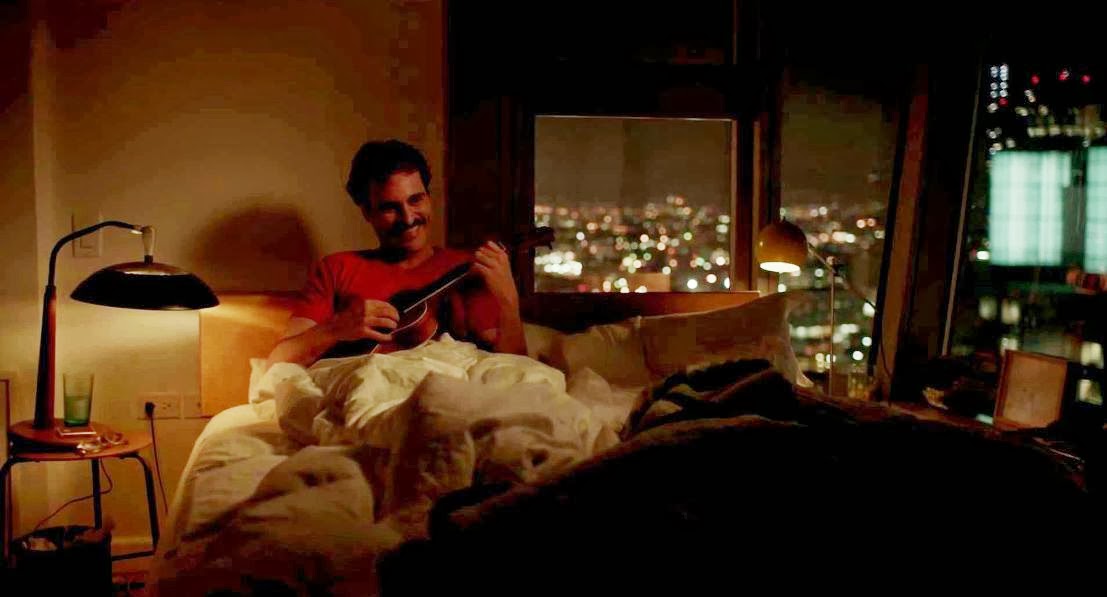 The rest of the cast is good too, Amy Adams playing the diametric opposite of her American Hustle role, largely make-up-free and recalling Cameron Diaz in Being John Malkovich. Chris Pratt is gently funny as Theodore’s colleague at BeautifulHandwrittenLetters.com and Mara is suitably frosty as his soon-to-be ex-wife, short flashbacks showing how rosy things were to start with. Olivia Wilde is only really in one scene but she is effective as Theodore’s blind date. Jonze himself gets a small role, entertainingly voicing a foul-mouthed alien child in a video game Theodore plays, quite possibly a spoof of many a Seth MacFarlane-style character. Listen out for vocal cameos from the likes of Kristin Wiig and Brian Cox, too.

Her has been compared to largely-forgotten 80s comedy Electric Dreams but perhaps it’s more like S1m0ne (also largely-forgotten), in which a desperate film director fabricates an A.I. actress that he tries to pass off as the real deal. Her handles the idea with far more wit and sophistication, delving far past the surface of its high-concept premise, and yet admirably avoids coming off as smug. Jonze’s screenplay is, on the surface, a less-complex affair than any of the scripts written by oft-collaborator Charlie Kaufman, but it is by no means poorly-written and Jonze’s command of character, emotion, tone and subtext is nothing short of masterful. Her is an “examination of” and a “meditation on” increasingly pertinent issues in the way we lead our lives in today’s “smart”, hyper-connected world, but it is far from clinical and sterile – as that description might suggest.

SUMMARY: Spike Jonze brings a deft intelligence and a disarmingly personal warmth and vulnerability to one of the best cinematic romances in recent memory, if not ever.

Jedd Jong
Posted by Jedd the Jedi at 4:40 AM