Arnold Schwarzenegger has played the protective father casting a watchful eye over his daughter in many an action flick. In this horror drama, he plays Wade Vogel, a Papa Wolf of a different stripe. Wade’s daughter Maggie (Breslin) is among the victims of an epidemic, infected by a virus that slowly turns its host into cannibalistic zombies. Maggie, her father and her stepmother Caroline (Richardson) live in fear of “the turn”, the point in the disease’s incubation period from which there is no coming back. As Maggie struggles with the illness and the impact her condition has on those she holds dear, Wade stands steadfast by his daughter’s side. 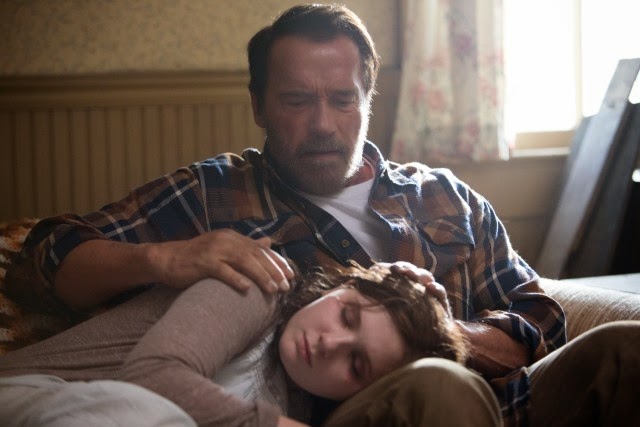 Coming off like an alternate universe collaboration between Jodi Picoult and George A. Romero, Maggie takes a zombie outbreak and spins this horror trope into a terminal illness drama. John Scott 3’s screenplay landed on the 2011 Black List of most-liked unproduced scripts in Hollywood and it’s easy to see the appeal in the premise. However, Maggie often gets caught up in said premise, unable to transcend the concept itself to be truly affecting. Director Henry Hobson takes great pains to establish the situation and portray the epidemic as a credible threat, but seeing how ingrained a particular interpretation of zombies are in popular culture, it will be difficult for audiences to break free of the perception of zombies as mindless, shambling monsters and even harder for them to reconcile that with tender family drama. 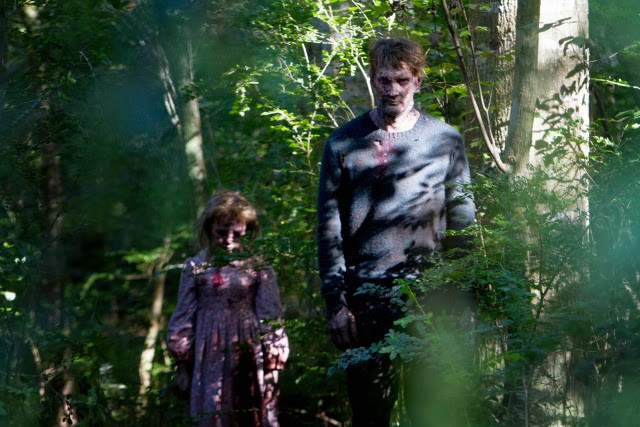 Those whose lives have been affected by terminal illness directly or otherwise will certainly be able to relate to many of the heart-rending scenarios presented in Maggie. We applaud the allegorical approach and this isn’t the first story to put a spin on the zombie formula – World War Z (the book far more so than the film) was a socio-political satire set against a global zombie outbreak. Maggie takes the premise very seriously, devoid of self-reflexive winks at the audience, and is earnest to a fault. There is always the danger that the inherent absurdity of a weepy zombie flick will negate the emotional beats, Maggie occasionally painting itself into this corner. The film is also very much a slow burn, drifting from scene to scene in an episodic fashion. Even though there are disturbing moments of tension and there’s a ticking clock element in place, Maggie often lacks a crucial urgency. 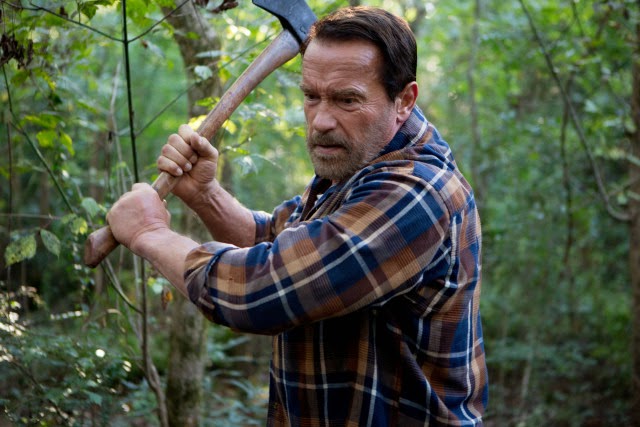 The cast does give it their all and this does have the vibe of an indie picture that’s managed to snag a couple of big names because they were drawn to the challenge. This has been touted as a revelatory performance from Schwarzenegger, and while he is more convincingly vulnerable than we’ve ever seen him, it is difficult to completely buy the Austrian Oak as an average Midwestern dad for obvious reasons. That trademark accent is an integral part of the Schwarzenegger brand and his larger-than-life persona works against him in this film, as opposed to dovetailing into the onscreen role. The most justification this is given is the surname “Vogel”. Rather than completely becoming the character, as is the goal for any actor, Schwarzenegger’s presence calls attention to itself in spite of his best efforts. That said, it is a smart move on his part to tackle a “serious acting” role that happens to be in a genre movie. 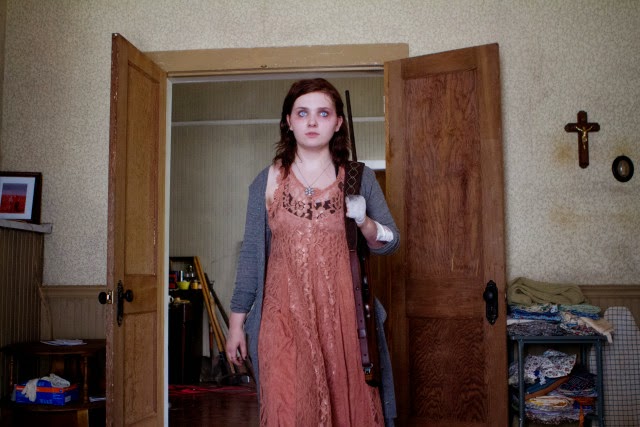 Abigail Breslin delivers a raw, moving performance, assisted by unsettling makeup effects devised by Michael Broom, Karri Farris and other talented artists. The Oscar nominee takes it as seriously as something like My Sister’s Keeper, and the turmoil within Maggie as the zombie virus tightens its grip on her is sufficiently moving. She persists in trying to live as regular a life as possible, one of the film’s best scenes set during a campfire as Maggie hangs out with her friends, clinging to whatever normalcy remains in her existence. Joely Richardson’s turn as Maggie’s stepmother Caroline is realistic, never overplaying the implication that her attitude towards Maggie’s condition differs from Wade’s because Maggie isn’t her biological daughter. That all three are believable as a family unit is testament to the level of acting skill everyone brings to the table. 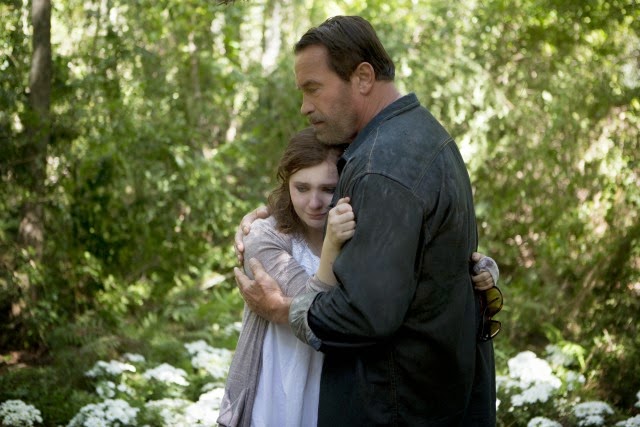 Maggie is a bold little experiment and its mashup of genres sometimes yields results, but it is ultimately less absorbing than it could’ve been. This reviewer spent much of the running time wondering “is this a horror movie that’s trying to be a drama or is this a drama with elements of horror stirred in?” This indicates that the seams are still visible. However, we’d still recommend this for horror aficionados looking for a change of pace from the usual frenzied jump scare festivals and perhaps as a gateway for audiences who aren’t big horror buffs and prefer more substantial fare. 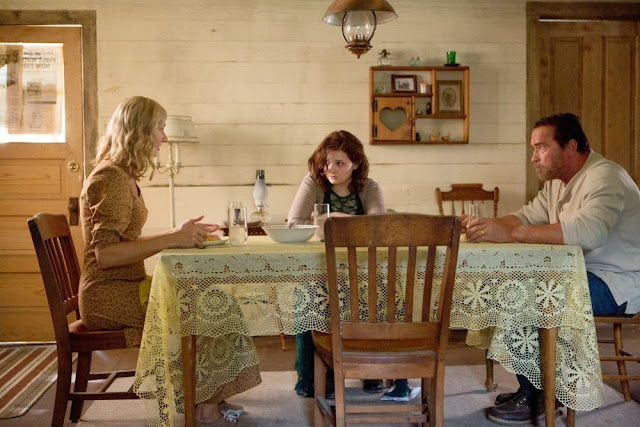 Summary: A zombie flick that cries “heart” rather than “BRAINS!”, Maggie has its shortcomings but is worth noticing for its uniqueness.

Jedd Jong
Posted by Jedd the Jedi at 3:24 AM