Have a Butt-kicking Christmas!

While most Christmas-themed movies seemed to be drowned in sticky, cloyingly sweet sentimentality, there is a genre of Christmas films that offer as much gunfire and explosions as they do tinsel and lights. Action movies and Christmas seem like odd bedfellows, but the combination is often very enjoyable.

The website "TV Tropes", a bottomless collection of every storytelling device known to man, calls this "An Ass-kicking Christmas". http://tvtropes.org/pmwiki/pmwiki.php/Main/AnAssKickingChristmas

As a Batman fan, I must mention Batman Returns, as far as Christmas-themed action films are concerned. I'll be honest, I didn't really enjoy Batman Returns. I thought it was less a Batman film and more an exercise in the language that is Burtonese. A language that I do not speak. Bizarre, grotesque, at times inappropriately hilarious and altogether not very Batman-ish, Batman Returns is not everyone's cup of tea. But when it comes to an action-packed Christmas movie, this delivers. And the scenes of a snowy Gotham City are gorgeous.

One of my favourite action-thriller films is Enemy of the State, which pretty much cemented Will Smith as a marketable action star, and paired him with Gene Hackman as surveillance expert Brill (in a nod to his earlier film The Conversation). Smith's character, lawyer Robert Clayton Dean, comes into possession of an incriminating videotape, and is mercilessly hunted down by corrupt congressman Thomas Reynolds, who uses cutting-edge NSA technology to track him down. Cue asking Brill for help - which includes putting a bug in a Christmas tree ornament.

Also starring Gene Hackman is Behind Enemy Lines, the film in which Owen Wilson attempts to play a straight-up, serious action hero - and succeeds. Though to a lesser extent than the films mentioned above, Behind Enemy Lines is set during Christmas. For naval crewman and other soldiers stationed away from home, Christmas is a bittersweet time: there will usually be some sort of celebration going on at their base/ship, but at the same time they are unable to be with their families. The beginning of Lt. Chris Burnett's (Wilson) troubles is when Admiral Reisgart (Hackman) sends him off on a reconnaisance mission as punishment for misconduct. instead of letting him join in the festivities.

Veering into the land of fantasy, we have Steven Spielberg's Hook, an interesting take on the Peter Pan mythos, which asks the question: what if Peter Pan did indeed grow up? The majority of the film doesn't have a very Christmassy vibe (as it is set in Neverland), but Christmas does frame the story. Peter Banning (Robin Williams) and family take a trip to London for Christmas, to visit his grandmother-in-law Wendy Darling (Maggie Smith). Peter Pan's old foe Captain Hook (Dustin Hoffman) kidnaps Banning's children, and Banning has to rediscover his lost past as the boy who said he would never grow up. A good deal of swashbuckling follows, fulfilling the "ass-kicking" criteria. 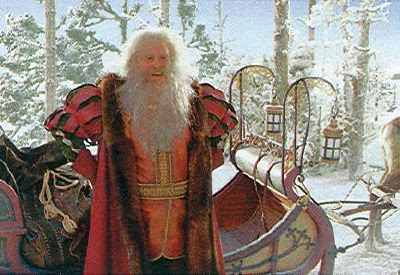 Finally, we have the first film in the Chronicles of Narnia series, The Lion, The Witch and the Wardrobe. Adapted from C.S. Lewis' classic book, the series has strong undertones rooted in Christianity. Blending in popular Christmas mythology, Father Christmas himself pops up, giving the Pevensie children gifts that will serve them in their future voyages to Narnia. The film is perfect Christmas-time family viewing, and has a glimmer of epic fantasy action too.

I'm aware that there are several other films suiting the theme that I didn't cover, including the first Lethal Weapon movie and indeed the first Rambo film. First Blood. I haven't seen them yet, so didn't write about it 'ere.

Happy Christmas to all, and to all a good night.