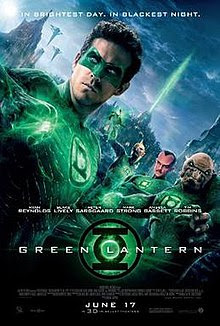 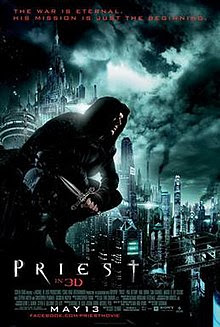 Paul Bettany seems to have a thing for tough, butt-kicking religious types: he played an assassin monk in The Da Vinci Code, an uzi-wielding archangel in Legion (also by director Scott Stewart), and in this Korean comic book-based film is the titular warrior priest, a specially-ordained vampire fighter. When his niece Lucy (Lily Collins) is kidnapped by vampires, the Priest (Bettany), rendered redundant after the human-vampire wars, goes back into action to rescue her, assisted by small town lawman Hicks (Gigandet), and his former colleague the Priestess (Q), facing off against the villainous human-vampire hybrid Black Hat (Urban).

The main problem with this movie is that it brings nothing new to the table. Warrior priests aren’t new, vampire wars aren’t new and totalitarian religious regimes aren’t new either. In fact, the whole movie can be turned into a game of “spot-where-this-came-from!” Elements are liberally borrowed from such movies as the Underworld films, the Mad Max films, Blade Runner, Equilibrium, V for Vendetta and so on. Black Hat’s getup is straight out of The Good, the Bad and the Ugly and even the monstrous hive guardian brings to mind the rancor beast from Star Wars Episode VI: Return of the Jedi.

The film is droll, joyless and takes itself far too seriously. Movies like this are meant to be escapism, and the 3D adds very little to the uninspired mix. The characters are mostly one-note and the cast doesn’t have to do very much. In addition to the cross tattooed on his forehead, all Bettany needs to carry him through the movie is a scowl. However, Karl Urban seems to be having fun, chewing the scenery as the big bad, but even he is underused. Also, what on earth is veteran actor and Oscar-nominee Christopher Plummer doing here?

Sorely lacking in imagination, energy and about as soulless as the vampires in it, Priest is far from a fun night out at the theatre. However, it does have decent visual effects and a stylish animated prologue going for it. But in the end, maybe paying your own priest at church a visit is more worthwhile– he’s probably more fun.

SUMMARY: Bringing nothing new to the table, Priest is a lifeless, paint-by-numbers post-apocalyptic thriller. Get your warrior priest/vampire war fix elsewhere.

Pirates of the Caribbean: On Stranger Tides

PIRATES OF THE CARIBBEAN: ON STRANGER TIDES
2011

In 1957, the Pirates of the Caribbean ride opened at Disneyland in Anaheim, California. In 2003, Pirates of the Caribbean: Curse of the Black Pearl, based on the ride and expected to be a flop, brought the big swashbuckling pirate movie back in a big way. And now, Captain Jack is back for a fourth voyage in this movie, based on the novel “On Stranger Tides” by Tim Powers.

In search of the fabled Fountain of Youth, Captain Jack has to battle the treacherous pirate Blackbeard and encounters his daughter, the beautiful Angelica, with whom he had a fling many years ago. Racing them to the Fountain are Jack’s old rival Barbossa, now in the employ of the King, and the Spaniards.

For a franchise that was almost swallowed up by its ambitious scope and convoluted plot, On Stranger Tides is a triumphant return to form. This is a sequel in the best sense of the word: carrying on yet starting anew. The story is well-told and the pacing is swift. Everything we loved about the first film is back stronger than ever: the wonderful period atmosphere, the swordfights, chases and naval battles, and, of course, Captain Jack.

Johnny Depp returns to his defining role like wearing a glove, every amusing mannerism, every witticism, delivered with strong craftsmanship and lithe energy. He’s also armed with some great lines by screenwriters Terry Rossio and Ted Elliot. Now that the “Will and Elizabeth” story arc from the first three movies has wrapped, attention has returned square to Sparrow, and Depp never once disappoints.

While Depp certainly gets the lion’s share of the limelight, he never hogs it. The new players fit in just right among familiar characters. Cruz and Depp share crackling chemistry, the beautiful and cunning Angelica the only one to ever come close to beating Sparrow at his own game. Ian McShane makes for a very scary Blackbeard, a worthy adversary to Sparrow. Sam Claflin as missionary Philip Swift and Àstrid Bergès-Frisbey as the mermaid he falls in love with work hard to keep up with the rest of the cast and fare well too.

The old-fashioned spirit of adventure missing from many modern films is alive and well in the fourth Pirates outing. This is a supremely enjoyable ride (almost as much as the source material), filled from start to finish with the same energy that flowed through the veins of the first film.