Has Pixar Lost its Magic? A letter to the Straits Times Life! Mailbox

Last week, the Straits Times Life! ran an article by Boon Chan looking at Pixar's track record and what the poor (or middling) reception of films like Cars, Cars 2 and most recently Monsters University means. The studio is regarded by many as a shining beacon of innovative storytelling. So, has Pixar lost their magic? Several readers wrote in and I was one of 'em. 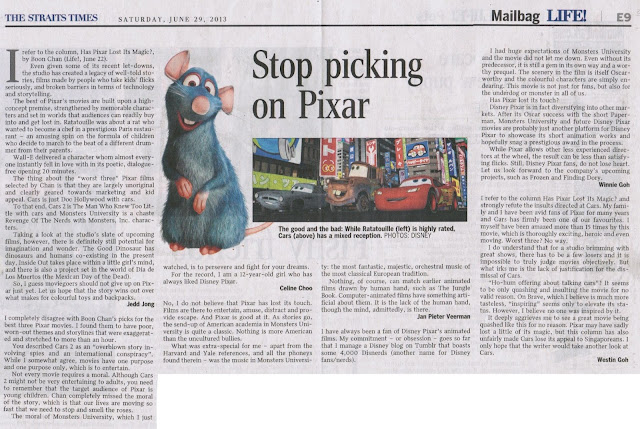 I refer to Has Pixar Lost Its Magic? by Boon Chan (Life!, June 22). Even given some of their recent let-downs, the studio has created a legacy of well-told stories, films made by people who take “kids’ flicks” seriously and broke barriers in terms of technology and storytelling in making these films.

The best of Pixar's movies are built upon a high-concept premise that is strengthened with memorable characters and set in world audiences can readily buy into and get lost in. Ratatouille was about a rat who wanted to become a chef in a prestigious Paris restaurant – an amusing spin on the formula of children who decide to march to the beat of a different drummer than their parents. WALL-E delivered a character whom most everyone could instantly fall in love with in those poetic, dialogue-free opening twenty minutes.
The thing about the “worst 3” Pixar films selected by Chan is that they are largely unoriginal and clearly geared towards marketing and kid appeal. Cars is just Doc Hollywood with cars; to that end Cars 2 is The Man Who Knew Too Little with cars and Monsters University is a chaste Revenge of the Nerds with Monsters, Inc. characters.

Taking a look at the studio’s slate of upcoming films however, there’s definitely still potential for imagination and wonder: The Good Dinosaur has dinosaurs and humans co-existing in the present day, Inside Out takes place within a little girl’s mind and there’s also a project set in the world of Dia de Los Muertos (the Mexican Day of the Dead.) So I guess moviegoers shouldn’t give up on Pixar just yet, and hope that story wins out over what makes for colourful toys and backpacks.

This is the article it was written in response to: 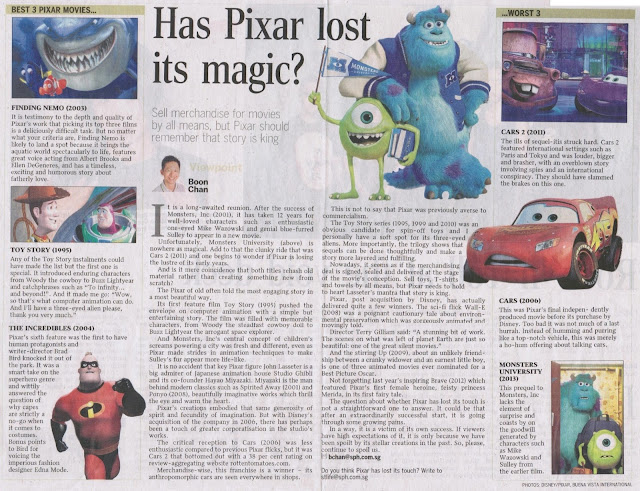