We Ship This: Top 10 Movie Spaceships

Shoutout to F***'s art director M.KWAN for the gorgeous layout. Disclaimer: The ships are arranged in order, but the layout changes the top four places. It should be the Close Encounters mothership, then the Serenity, then the Enterprise, then the Falcon in top place. Anyway, enjoy! 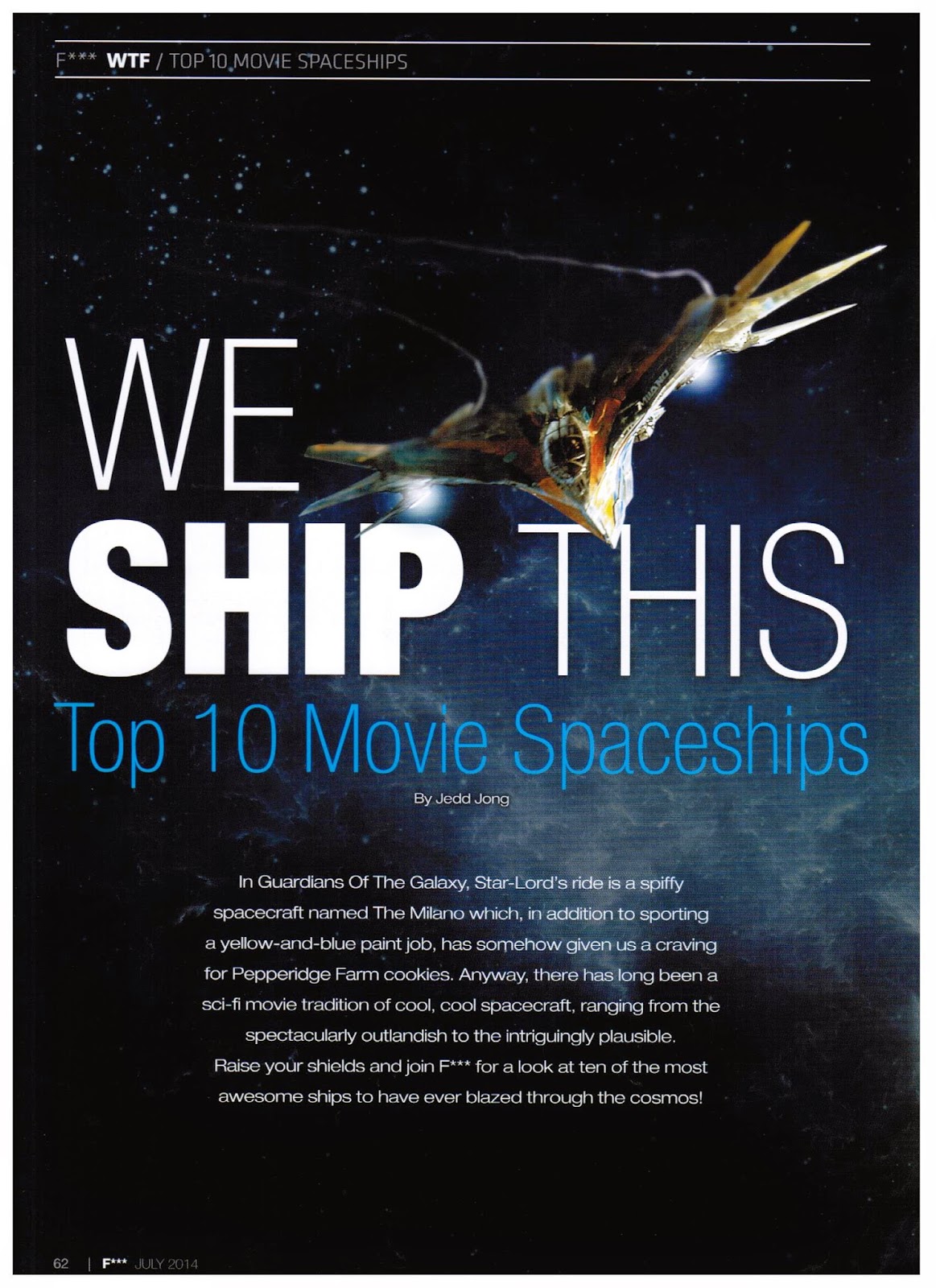 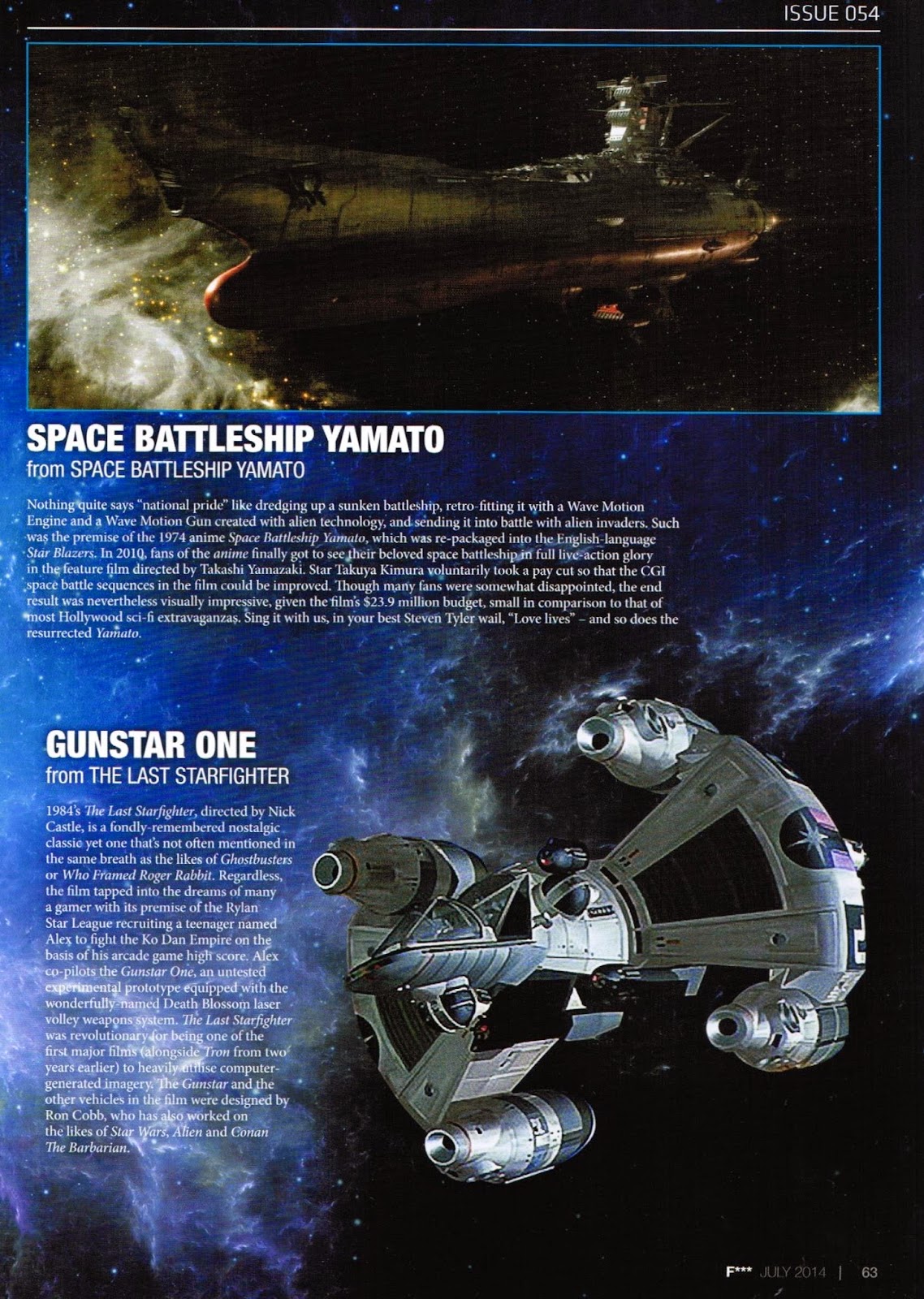 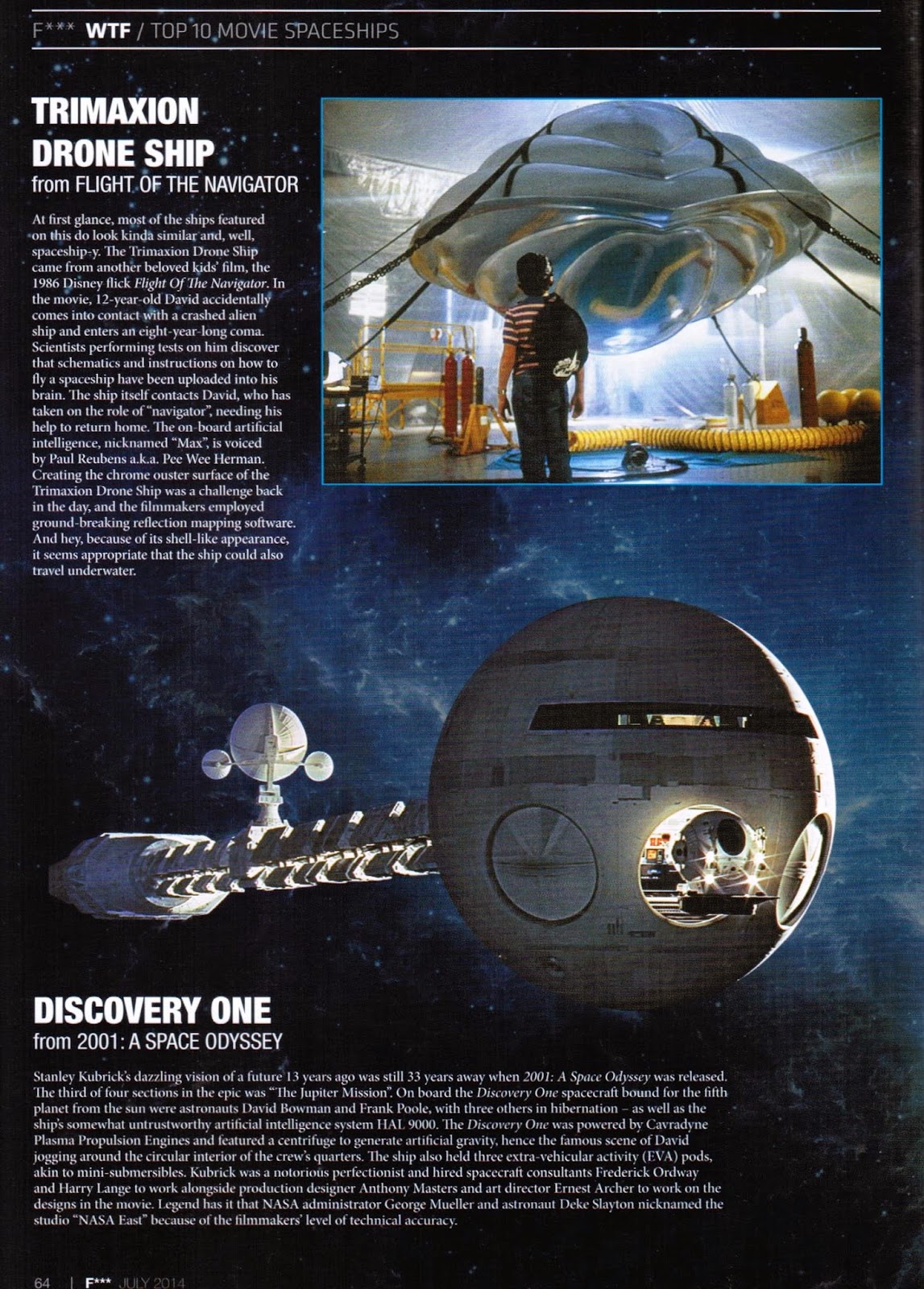 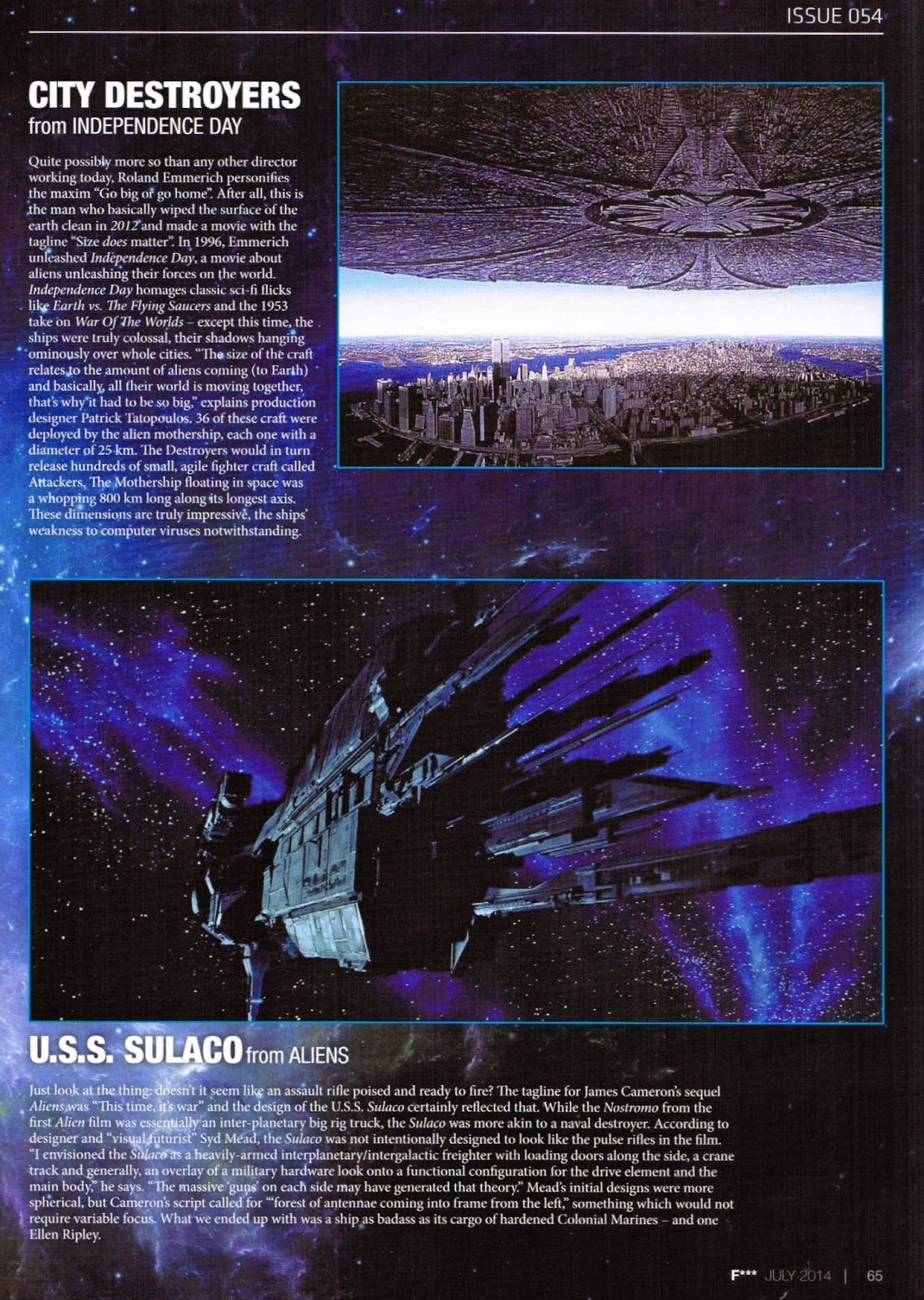 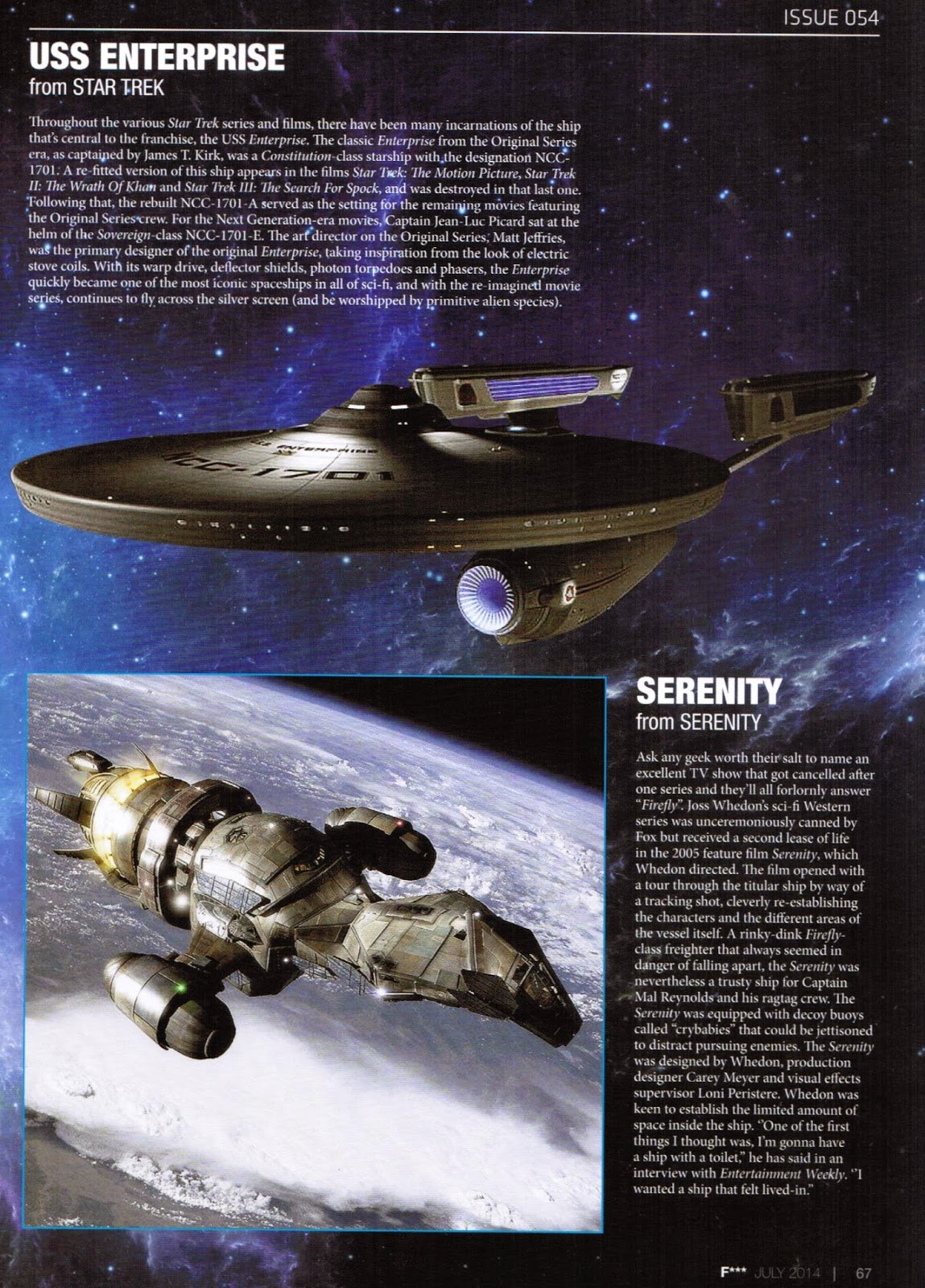 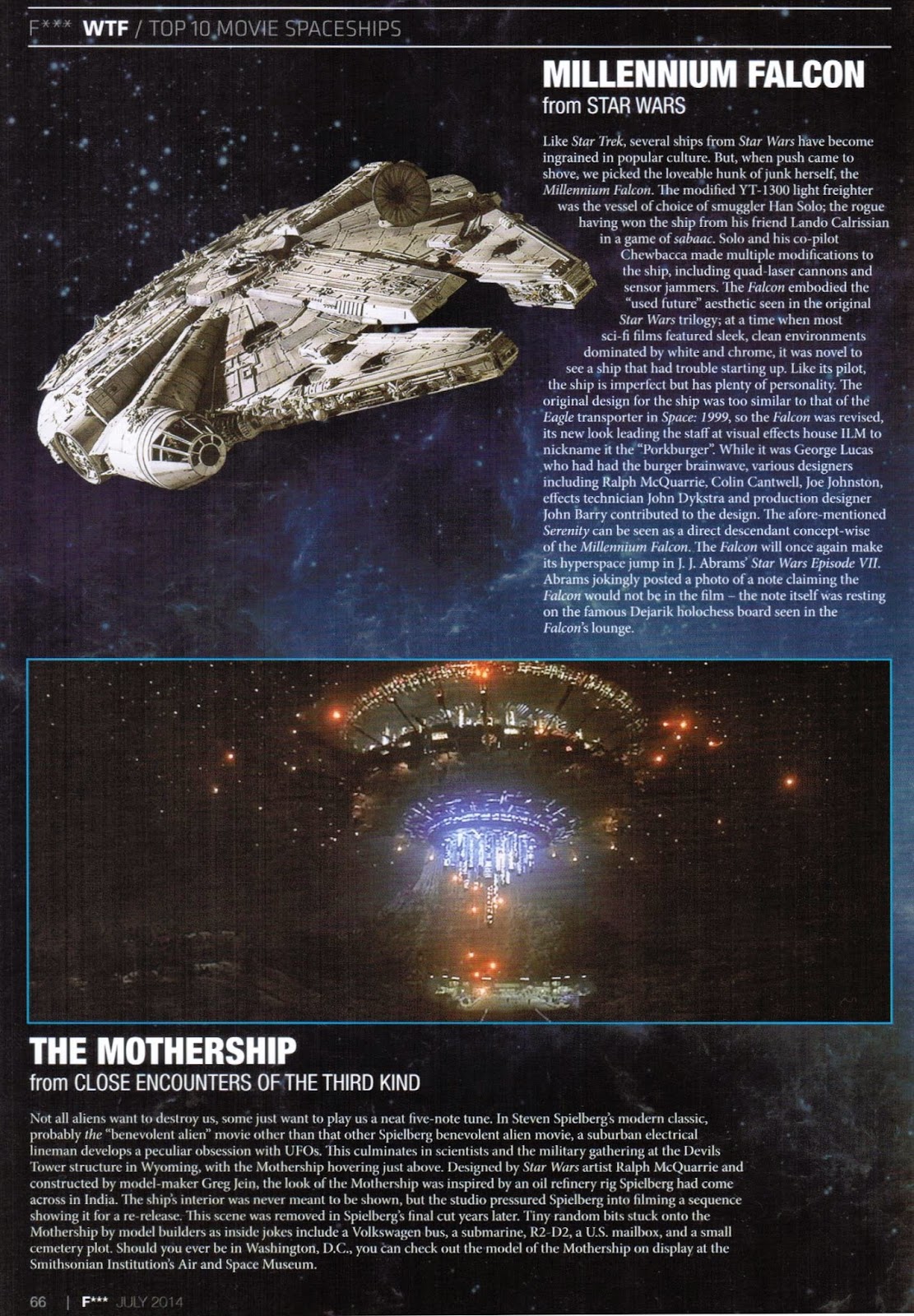 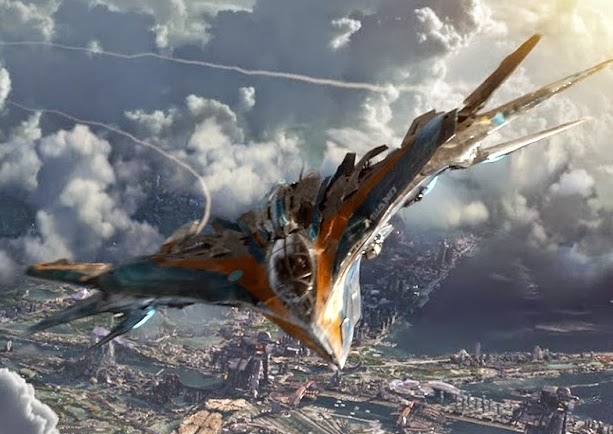 In Guardians of the Galaxy, Star-Lord’s ride is a spiffy spacecraft named The Milano, which in addition to sporting a yellow and blue paint job has somehow given us a craving for Pepperidge Farm cookies. Anyway, there has long been a sci-fi movie tradition of cool, cool spacecraft, ranging from the spectacularly outlandish to the intriguingly plausible. Raise your shields and join F*** for a look at 10 of the most awesome ships to blaze through the cosmos!

Nothing quite says “national pride” like dredging up a sunken battleship, retro-fitting it with a Wave Motion Engine and a Wave Motion Gun created with alien technology and sending it into battle with alien invaders. Such was the premise of the 1974 anime Space Battleship Yamato, which was re-packaged into the English-language Star Blazers. In 2010, fans of the anime finally got to see their beloved space battleship in full live-action glory, in the feature film directed by Takashi Yamazaki. Star Takuya Kimura voluntarily took a pay cut so that the CGI space battle sequences in the film could be improved. Though many fans were somewhat disappointed, the end result was visually impressive given the film’s $23.9 million budget, small in comparison to that of most Hollywood sci-fi extravaganzas. Sing it with us, in your best Steven Tyler wail, “loves lives” – and so does the resurrected Yamato.

GUNSTAR ONE from THE LAST STARFIGHTER 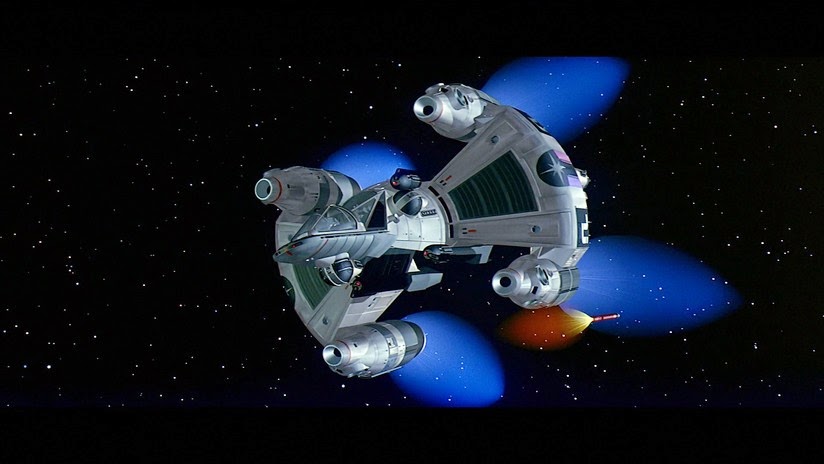 1984’s The Last Starfighter, directed by Nick Castle, is a fondly-remembered nostalgic classic yet one that’s not often mentioned in the same breath as the likes of Ghostbusters or Who Framed Roger Rabbit. Regardless, the film tapped into the dreams of many a gamer with its premise of the Rylan Star League recruiting a teenager named Alex to fight the Ko Dan Empire on the basis of his arcade game high score. Alex co-pilots the Gunstar One, an untested experimental prototype equipped with the wonderfully-named Death Blossom laser volley weapons system. The Last Starfighter was revolutionary for being one of the first major films (alongside Tron from two years earlier) to heavily utilise computer-generated imagery. The Gunstar and the other vehicles in the film were designed by Ron Cobb, who has also worked on the likes of Star Wars, Alien and Conan the Barbarian.

TRIMAXION DRONE SHIP from FLIGHT OF THE NAVIGATOR 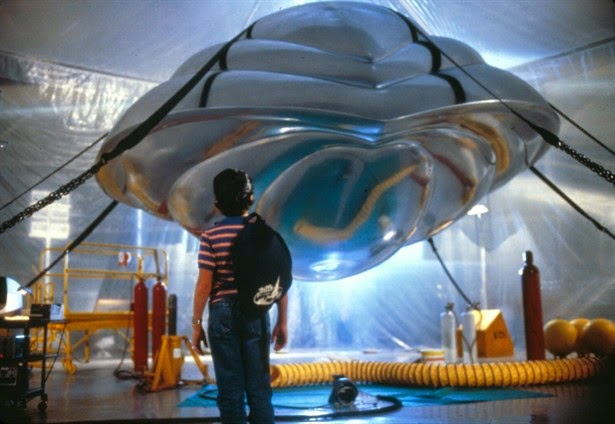 At first glance, most of the ships featured on this list do look kinda similar and, well, spaceship-y. The Trimaxion Drone Ship came from another beloved 80s kids’ film, The 1986 Disney flick Flight of the Navigator. In the movie, 12 year old David accidentally comes into contact with a crashed alien ship and enters into an eight-year-long coma. Scientists performing tests on him discover that schematics and instructions on how to fly a spaceship have been uploaded into his brain. The ship itself contacts David, who has taken on the role of “navigator”, needing his help to return home. The on-board artificial intelligence, nicknamed “Max”, was voiced by Paul Reubens a.k.a. Pee Wee Herman. Creating the chrome outer surface of the Trimaxion Drone Ship was a challenge back in the day and the filmmakers employed ground-breaking reflection mapping software. And hey, because of its shell-like appearance, it seems appropriate that the ship could also travel underwater.

DISCOVERY ONE from 2001: A SPACE ODYSSEY

Stanley Kubrick’s dazzling vision of a future 13 years ago was still 33 years away when 2001: A Space Odyssey was released. The third of four sections in the epic was “The Jupiter Mission”. On board the Discovery One spacecraft bound for the fifth planet from the sun were astronauts David Bowman and Frank Poole with three others in hibernation – as well as the ship’s somewhat untrustworthy artificial intelligence system HAL 9000. The Discovery One was powered by Cavradyne Plasma Propulsion Engines and featured a centrifuge to generate artificial gravity, hence the famous scene of David jogging around the circular interior of the crew’s quarters. The ship also held three extra-vehicular activity (EVA) pods, akin to mini-submersibles. Kubrick was a notorious perfectionist and hired spacecraft consultants Frederick Ordway and Harry Lange to work alongside production designer Anthony Masters and art director Ernest Archer to devise the designs in the movie. Legend has it that NASA administrator George Mueller and astronaut Deke Slayton nicknamed the studio “NASA East” because of the filmmakers’ level of technical accuracy. 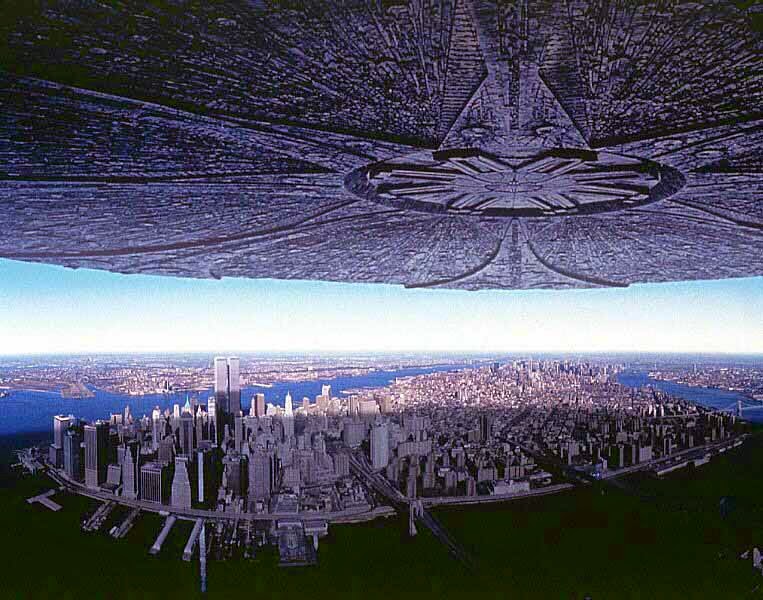 Quite possibly above any other director working today, Roland Emmerich personifies the maxim “go big or go home”. After all, this is the man who basically wiped the surface of the earth clean in 2012 and made a movie with the tagline “size does matter”. In 1996, Emmerich unleashed Independence Day, a movie about aliens unleashing their forces on the world, on the world. Independence Day homages classic sci-fi flicks like Earth vs. The Flying Saucers and the 1953 take on War of the Worlds – except this time, the ships were truly colossal, their shadows hanging ominously over whole cities. “The size of the craft relates to the amount of aliens coming (to Earth) and basically, all their world is moving together, that's why it had to be so big,” explained production designer Patrick Tatopoulos. 36 of these craft were deployed by the alien mother ship, each one with a diameter of 25 km. The Destroyers would in turn release hundreds of small, agile fighter craft called Attackers. The Mothership floating in space was a whopping 800 km long along its longest axis. These dimensions are truly impressive, the ships’ weakness to computer viruses notwithstanding. 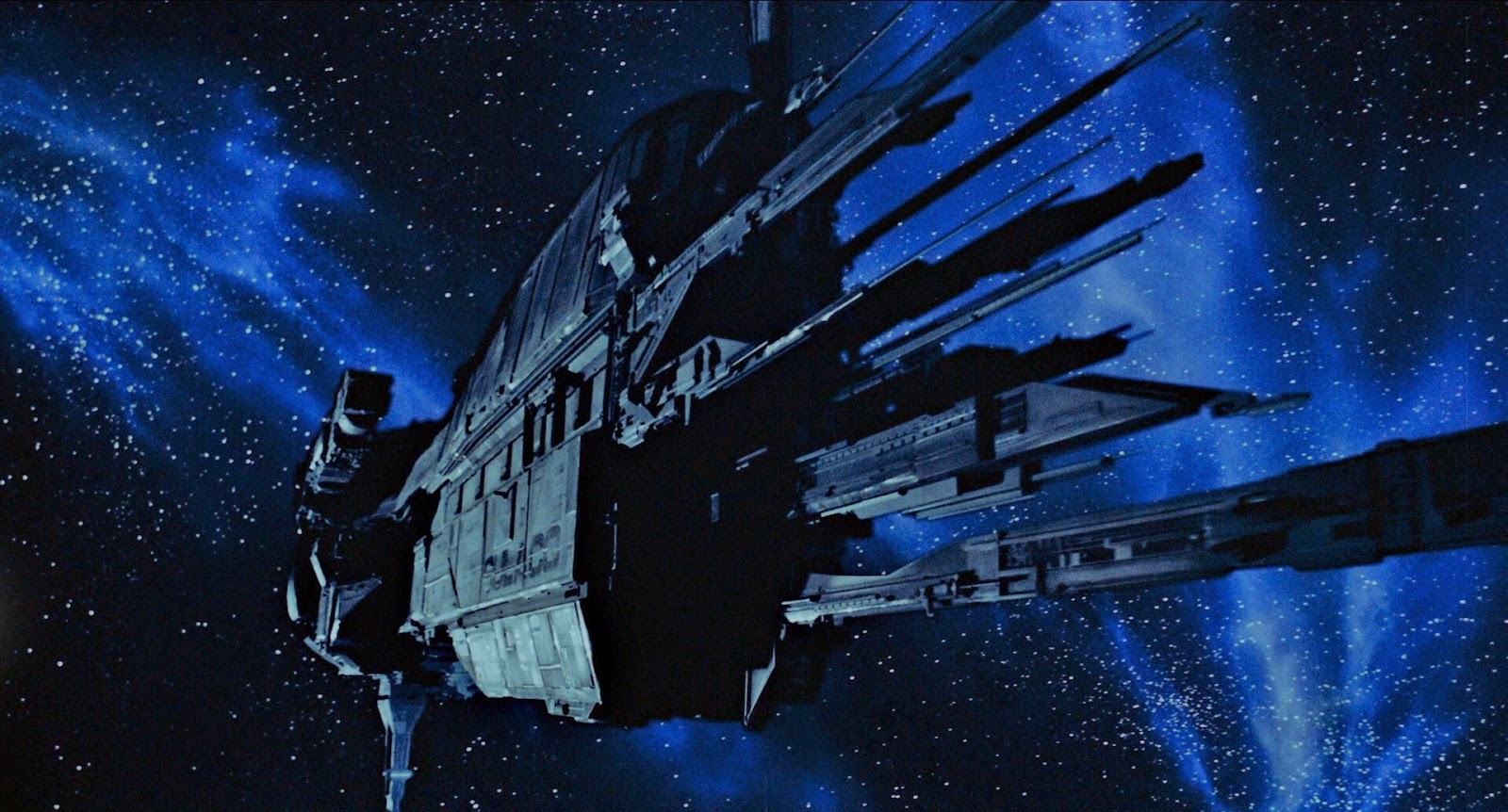 Just look at the thing: doesn’t it seem like an assault rifle poised and ready to fire? The tagline for James Cameron’s sequel Aliens was “this time, it’s war” and the design of the U.S.S. Sulaco certainly reflected that. While the Nostromo from the first Alien film was essentially an interplanetary big rig truck, the Sulaco was more akin to a naval destroyer. According to designer and “visual futurist” Syd Mead, the Sulaco was not intentionally designed to look like the pulse rifles in the film. “I envisioned the Sulaco as a heavily armed, interplanetary/intergalactic freighter with loading doors along the side, a crane track and generally, an overlay of military hardware look onto a functional configuration for the drive element and the main body,” he said. “The massive 'guns' on each side may have generated that theory.” Mead’s initial designs were more spherical, but Cameron’s script called for “'forest of antennae coming into frame from the left,” something which would not require variable focus. What we ended up with was a ship as badass as its cargo of hardened Colonial Marines – and one Ellen Ripley.

THE MOTHERSHIP from CLOSE ENCOUNTERS OF THE THIRD KIND

Not all aliens want to destroy us, some just want to play us a neat five-note tune. In Steven Spielberg’s modern classic, probably the “benevolent alien” movie other than that other Spielberg benevolent alien movie, a suburban electrical lineman develops a peculiar obsession with UFOs. This culminates in scientists and the military gathering at the Devils Tower structure in Wyoming; the Mothership hovering just above. Designed by Star Wars artist Ralph McQuarrie and constructed by model maker Greg Jein, the look of the Mothership was inspired by an oil refinery rig Spielberg had come across in India. The ship’s interior was never meant to be shown, but the studio pressured Spielberg into filming a sequence showing it for a re-release. This scene was removed in Spielberg’s final cut years later. Tiny random bits stuck onto Mothership by model builders as inside jokes include a Volkswagen bus, a submarine, R2-D2, a U.S. mailbox, and a small cemetery plot. Should you ever be in Washington, D.C., you can check out the model of the Mothership on display at the Smithsonian Institution's Air and Space Museum. 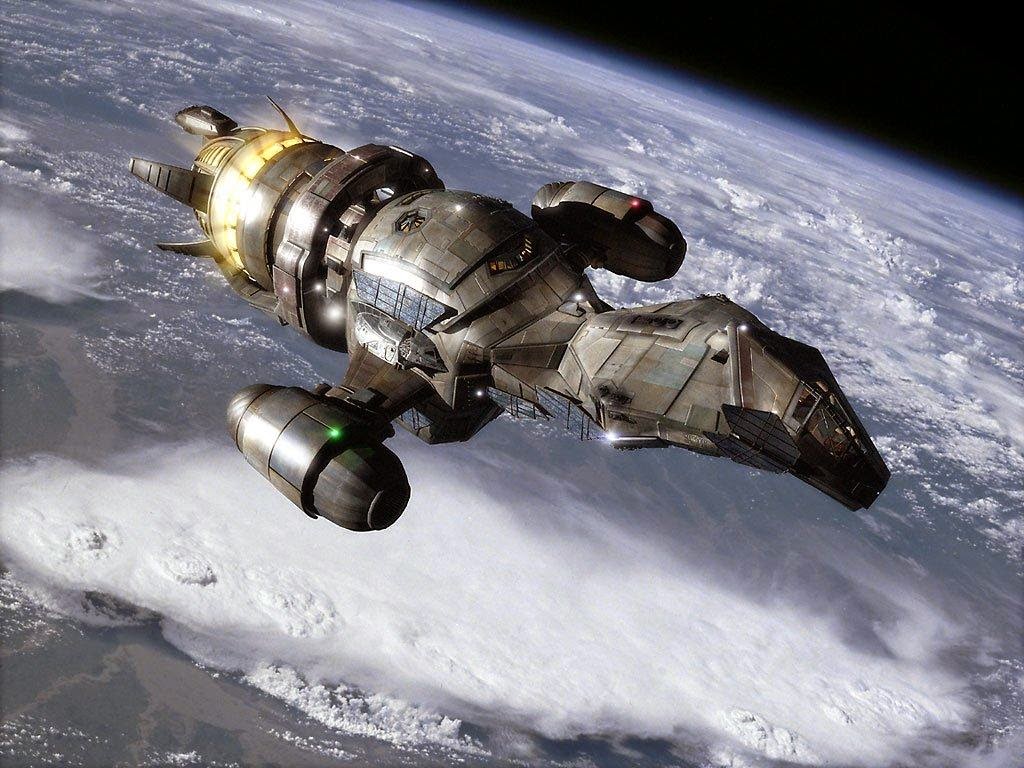 Ask any geek worth their salt to name an excellent TV show that got cancelled after one season and they’ll all forlornly answer “Firefly”. Joss Whedon’s sci-fi Western series that got unceremoniously canned by Fox received a second lease of life in the 2005 feature film Serenity, which Whedon directed. The film opened with a tour through the titular ship by way of a tracking shot, cleverly re-establishing the characters and the different areas of the vessel itself. A rinky-dink Firefly-class freighter that always seemed in danger of falling apart, the Serenity was nevertheless a trusty ship for Captain Mal Reynolds and his ragtag crew. The Serenity was equipped with decoy buoys called “crybabies” that could be jettisoned to distract pursuing enemies. The Serenity was designed by director Joss Whedon, production designer Carey Meyer and visual effects supervisor Loni Peristere. Whedon was keen to establish the limited amount of space inside the ship. ''One of the first things I thought was, I'm gonna have a ship with a toilet,'' he said in an interview with Entertainment Weekly. ''I wanted a ship that felt lived-in.'' 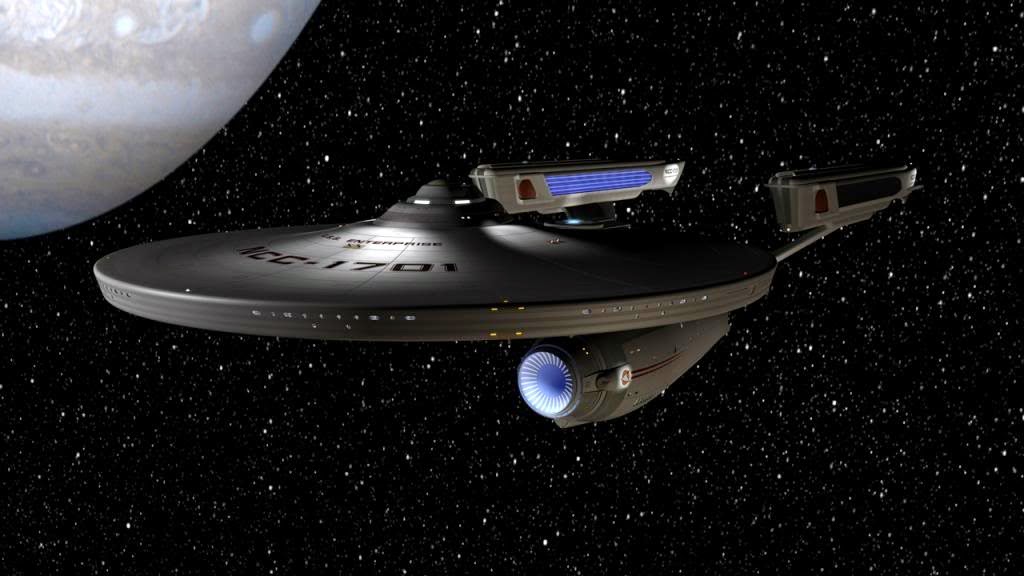 Throughout the various Star Trek series and films, there have been many incarnations of the ship that’s central to the franchise, the USS Enterprise. The classic Enterprise from the Original Series era captained by James T. Kirk was a Constitution-class starship with the designation NCC-1701. A re-fitted version of this ship appears in the films Star Trek: The Motion Picture, Star Trek II: The Wrath of Khan and Star Trek III: The Search for Spock, being destroyed in that last one. Following that, the rebuilt NCC-1701-A served as the setting for the remaining movies featuring the Original Series crew. For the Next Generation-era movies, Captain Jean-Luc Picard sat at the helm of the Sovereign-class NCC-1701-E. The art director on the Original Series, Matt Jeffries, was the primary designer of the original Enterprise, taking inspiration from the look of electric stove coils. With its warp drive, deflector shields, photon torpedoes and phasers, the Enterprise quickly became one of the most iconic spaceships in all of sci-fi, and with the re-imagined movie series, continues to fly across the silver screen (and be worshipped by primitive alien species). Like Star Trek, several ships from Star Wars have become ingrained in popular culture but when push came to shove, we picked the loveable hunk of junk herself, the Millennium Falcon. The modified YT-1300 light freighter was the vessel of choice of smuggler Han Solo; the rogue having won the ship in a game of sabaac from his friend Lando Calrissian. Solo and his co-pilot Chewbacca made multiple modifications to the ship, including quad laser cannons and sensor jammers. The Falcon embodied the “used future” aesthetic seen in the original Star Wars trilogy; at a time when most sci-fi films featured sleek, clean environments dominated by white and chrome, it was novel to see a ship that had trouble starting up. Like its pilot, the ship is imperfect but has plenty of personality. The original design for the ship was too similar to that of the Eagle transporter in Space: 1999, so the Falcon was revised, its new look leading the staff at visual effects house ILM to nickname it the “Porkburger”. While it was George Lucas who had the burger brainwave, various designers including Ralph McQuarrie, Colin Cantwell, Joe Johnston, effects technician John Dykstra and production designer John Barry contributed to the design. The afore-mentioned Serenity can be seen as a direct descendant concept-wise of the Millennium Falcon. The Falcon will once again make its hyperspace jump in J. J. Abrams’ Star Wars Episode VII. Abrams jokingly posted a photo of a note claiming the Falcon would not be in the film – the note itself was resting on the famous Dejarik holochess board seen in the Falcon’s lounge.
Posted by Jedd the Jedi at 6:30 AM