As published in Issue #69 of F*** Magazine, Singapore 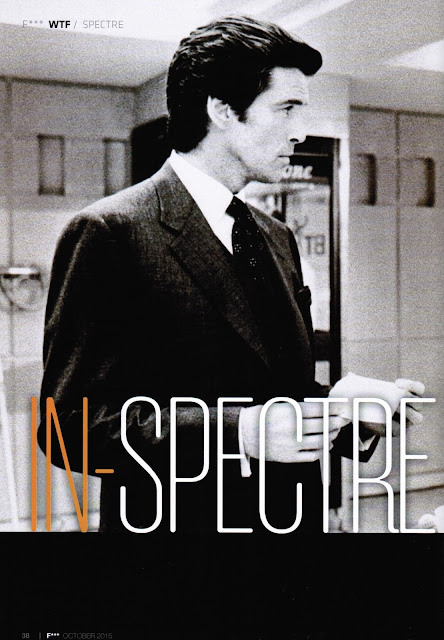 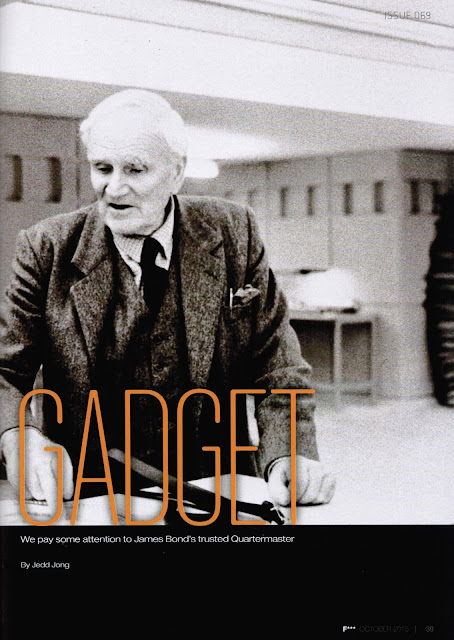 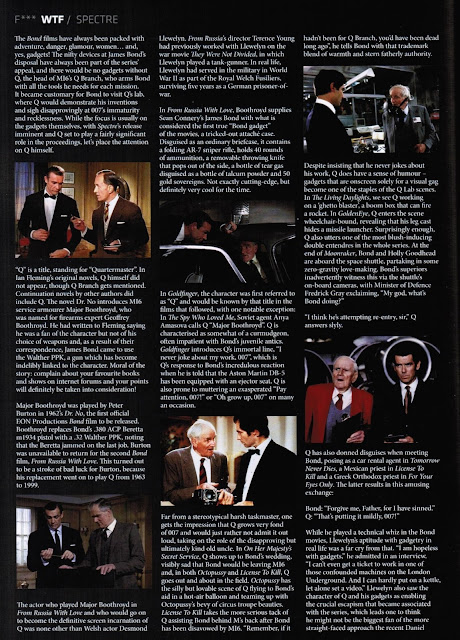 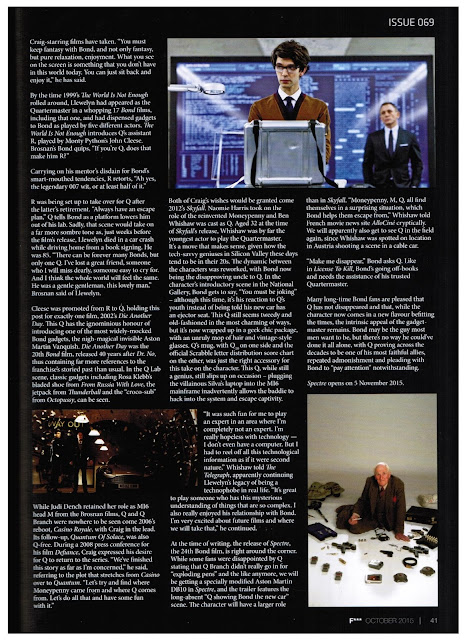 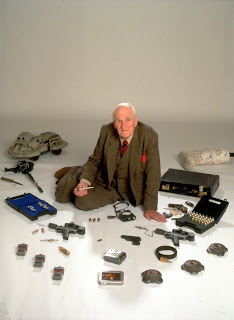 The Bond films have always been packed with adventure, danger, glamour, women…and yes, gadgets! The nifty devices at James Bond’s disposal have always been part of the series’ appeal, and there would be no gadgets without Q, the head of MI6’s Q Branch who arms Bond with all the tools he needs for each mission. It became customary for Bond to visit Q’s lab, where Q would demonstrate his inventions and sigh disapprovingly at 007’s immaturity and recklessness. While the focus is usually on the gadgets themselves, with Spectre’s release imminent and Q set to play a fairly significant role in the proceedings, let’s place the attention on Q himself.

“Q” is a title, standing for “Quartermaster”. In Ian Fleming’s original novels, Q himself did not appear, though Q Branch gets mentioned. Continuation novels by other authors did include Q. The novel Dr. No introduces the MI6 service armourer Major Boothroyd, who was named for firearms expert Geoffrey Boothroyd. He had written to Fleming saying he was a fan of the character but not of his choice of weapons, and as a result of their correspondence, James Bond came to use the Walther PPK, a gun which has become indelibly linked to the character. Moral of the story: complain about your favourite books and shows on internet forums and your points will definitely be taken into consideration! 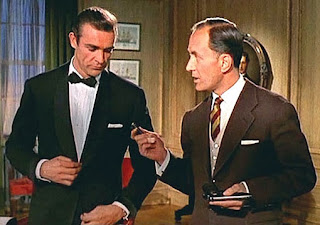 Major Boothroyd was played by Peter Burton in 1962’s Dr. No, the first official EON Productions Bond film to be released. Boothroyd replaces Bond’s .380 ACP Beretta m1934 pistol with a .32 Walther PPK, noting that the Beretta jammed on the last job. Burton was unavailable to return for the second Bond film, From Russia With Love. This turned out to be a stroke of bad luck for Burton, because his replacement went on to play Q from 1963 to 1999.

The actor who played Major Boothroyd in From Russia With Love and who would go on to become the definitive screen incarnation of Q was none other than Welsh actor Desmond Llewelyn. From Russia’s director Terence Young had previously worked with Llewelyn on the war movie They Were Not Divided, in which Llewelyn played a tank gunner. In real life, Llewelyn had served in the military in World War II as part of the Royal Welch Fusiliers, surviving five years as a German prisoner of war. 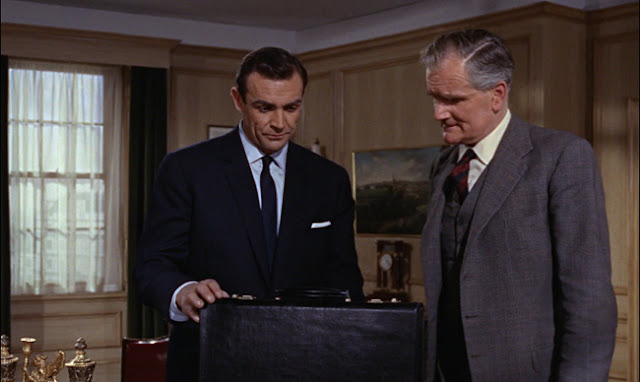 In From Russia With Love, Boothroyd supplied Sean Connery’s James Bond with what is considered the first true “Bond gadget” of the movies, a tricked-out attaché case. Disguised as an ordinary briefcase, it contained a folding AR-7 sniper rifle, held 40 rounds of ammunition, a removable throwing knife that popped out of the side, a bottle of tear gas disguised as a bottle of talcum powder and 50 gold sovereigns. Not exactly cutting-edge, but definitely very cool for the time. 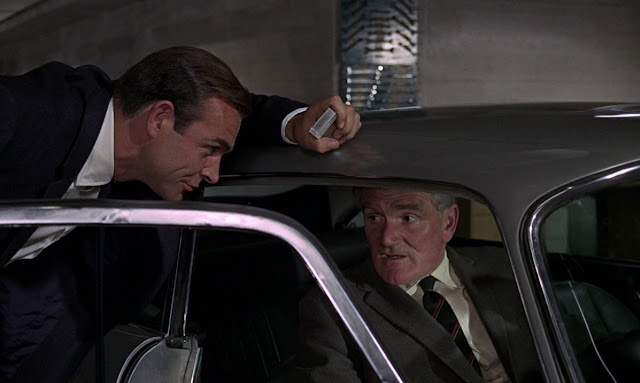 In Goldfinger, the character was first referred to as “Q” and would be known by that title in the films that followed, with one notable exception: In The Spy Who Loved Me, Soviet agent Anya Amasova calls Q “Major Boothroyd”. Q was characterised as somewhat of a curmudgeon, often impatient with Bond’s juvenile antics. Goldfinger introduced Q’s immortal line, “I never joke about my work, 007,” which was Q’s response to Bond’s incredulous reaction when he is told that the Aston Martin DB-5 has been equipped with an ejector seat. Q was also prone to muttering an exasperated “pay attention, 007!” or “oh grow up, 007” on many an occasion. 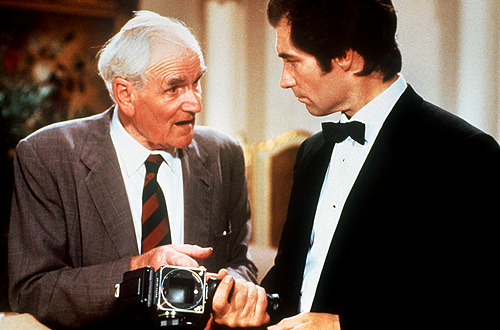 Q was far from a stereotypical harsh taskmaster, and one got the impression that he had grown very fond of 007 and would just rather not admit it out loud, taking on the role of the disapproving but ultimately kind old uncle. In On Her Majesty’s Secret Service, Q showed up to Bond’s wedding, visibly sad that Bond would be leaving MI6, and in both Octopussy and License to Kill, Q went out and about in the field. Octopussy has the silly but loveable scene of Q flying to Bond’s aid in a hot air balloon and teaming up with Octopussy’s bevy of circus troupe beauties. License to Kill took the more serious tack of Q assisting Bond behind M’s back after Bond has been disavowed by MI6. “Remember, if it hadn't been for Q Branch, you'd have been dead long ago,” he tells Bond with that trademark blend of warmth and stern fatherly authority.

Despite insisting that he never joked about his work, Q did have a sense of humour – gadgets that were onscreen solely for a visual gag became one of the staples of the Q Lab scenes. In The Living Daylights, we see Q working on a ‘ghetto blaster’, a boom box that can fire a rocket. In GoldenEye, Q enters the scene wheelchair-bound, revealing that his leg cast hides a missile launcher. Surprisingly enough, Q also utters one of the most blush-inducing double entendres in the whole series. At the end of Moonraker, Bond and Holly Goodhead are aboard the space shuttle, partaking in some zero-gravity lovemaking. Bond’s superiors inadvertently witness this via the shuttle’s on-board cameras, with Minister of Defence Fredrick Gray exclaiming “My God, what’s Bond doing?” 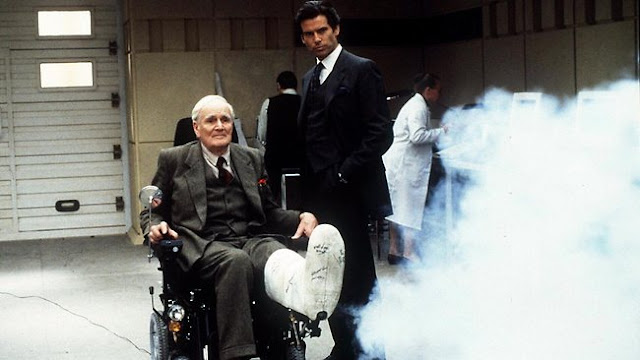 Q has also donned disguises when meeting Bond, posing as a car rental agent in Tomorrow Never Dies, a Mexican priest in License to Kill and a Greek Orthodox priest in For Your Eyes Only. The latter resulted in this amusing exchange:

While he played a technical whiz in the Bond movies, Llewelyn’s aptitude with gadgetry in real life was a far cry from that. “I am hopeless with gadgets,” he admitted in an interview. “I can't even get a ticket to work in one of those confounded machines on the London Underground. And I can hardly put on a kettle, let alone set a video.” Llewelyn also saw the character of Q and his gadgets as enabling the crucial escapism that became associated with the series, which leads one to think he might not be the biggest fan of the more straight-faced approach the recent Daniel Craig-starring films have taken. “You must keep fantasy with Bond, and not only fantasy, but pure relaxation, enjoyment. What you see on the screen is something that you don't have in this world today. You can just sit back and enjoy it,” he said. 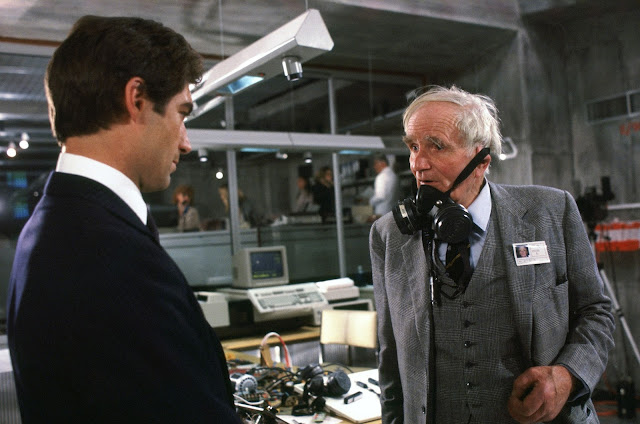 Carrying on his mentor’s disdain for Bond’s smart-mouthed tendencies, R retorts “Ah yes, the legendary 007 wit, or at least half of it.”

R was being set up to take over for Q after the latter’s retirement. “Always have an escape plan,” Q tells Bond as a platform lowers him out of his lab. Sadly, that scene would take on a far more sombre tone as just weeks before the film’s release, Llewelyn died in a car crash, driving home from a book signing. He was 85. “There can be forever many Bonds, but only one Q. I’ve lost a great friend, someone who I will miss dearly, someone easy to cry for. And I think the whole world will feel the same. He was a gentle gentleman, this lovely man,” Brosnan said of Llewelyn. 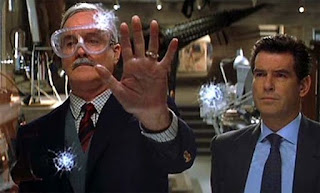 Cleese was promoted from R to Q, holding this post for exactly one film, 2002’s Die Another Day. This Q has the ignominious honour of introducing one of the most widely-mocked Bond gadgets, the nigh-magical invisible Aston Martin Vanquish. Die Another Day was the 20th Bond film, released 40 years after Dr. No, thus containing far more references to the franchise’s storied past than usual. In the Q Lab scene, classic gadgets including Rosa Klebb’s bladed shoe from From Russia With Love, the jetpack from Thunderball and the “croco-sub” from Octopussy can be seen.

While Judi Dench retained her role as MI6 head M from the Brosnan films, Q and Q Branch were nowhere to be seen come 2006’s reboot, Casino Royale, with Daniel Craig in the lead. Its follow up, Quantum of Solace, was also Q-free. During a 2008 press conference for his film Defiance, Craig expressed his desire for Q to return to the series. “We’ve finished this story as far as I’m concerned,” he said referring to the plot that stretched from Casino over to Quantum. “Let’s try and find where Moneypenny came from and where Q comes from. Let’s do all that and have some fun with it.” 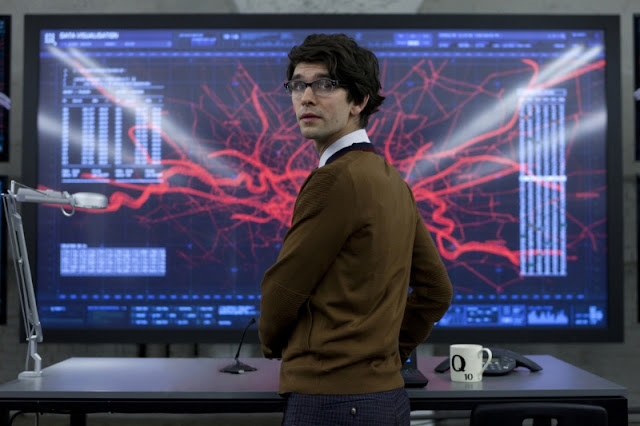 Both of Craig’s wishes would be granted come 2012’s Skyfall. Naomie Harris took on the role of the reinvented Moneypenny and Ben Whishaw was cast as Q. Aged 32 at the time of Skyfall’s release, Whishaw was by far the youngest actor to play the Quartermaster. It’s a move that makes sense, given how the tech-savvy geniuses in Silicon Valley these days tend to be in their 20s. The dynamic between the characters was reworked, with Bond now being the disapproving uncle to Q. In the character’s introductory scene in the National Gallery, Bond gets to say “you must be joking” – although this time, it’s his reaction to Q’s youth instead of being told his new car has an ejector seat. This Q still seemed tweedy and old-fashioned in the most charming of ways, but this was now wrapped up in a geek chic package, with an unruly mop of hair and vintage-style glasses. Q’s mug, with Q10 on one side and the official Scrabble letter distribution score chart on the other, was just the right accessory for this take on the character.

“It was such fun for me to play an expert in an area where I’m completely not an expert. I’m really hopeless with technology — I don’t even have a computer. But I had to reel off all this technological information as if it were second nature,” Whishaw told The Telegraph, apparently continuing Llewelyn’s legacy of being a technophobe in real life. “It’s great to play someone who has this mysterious understanding of things that are so complex. I also really enjoyed his relationship with Bond. I’m very excited about future films and where we will take that,” he continued. This Q, while still a genius, still slipped up on occasion – plugging the villainous Silva’s laptop into the MI6 mainframe inadvertently allowed the baddie to hack into the system and escape captivity. 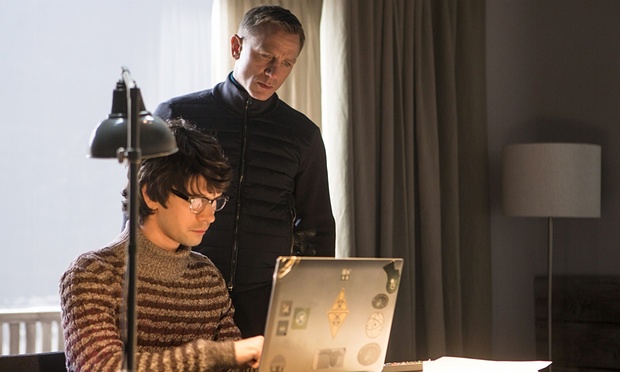 At the time of writing, the release of Spectre, the 24th Bond film, is just right around the corner. While some fans were disappointed by Q stating that Q Branch didn’t really go in for “exploding pens” and the like anymore, we will be getting a specially modified Aston Martin DB10 in Spectre, and the trailer features the long-absent “Q showing Bond the new car” scene. The character will have a larger role than in Skyfall. “Moneypenny, M, Q, all find themselves in a surprising situation, which Bond helps them escape from” Whishaw told French movie news site AlloCiné cryptically. We will apparently also get to see Q in the field again, since Whishaw was spotted on location in Austria shooting a scene in a cable car.

“Make me disappear,” Bond asks Q. Like in License to Kill, Bond’s going off-books and needs the assistance of his trusted Quartermaster.

Many long-time Bond fans are pleased that Q has not disappeared and that while the character now comes in a new flavour befitting the times, the intrinsic appeal of the gadget master remains. Bond may be the guy most men want to be, but there’s no way he could’ve done it all alone, with Q proving across the decades to be one of his most faithful allies, repeated admonishment and pleading with Bond to “pay attention” notwithstanding.