On something of a Batman high after reading the exciting news of the confirmed villains for "The Dark Knight Rises". Here are more thoughts on Batman's on-screen portrayals.

While I enjoyed the animated series adaptations to varying degrees, I won't go so far as to say that they were better than all the films-The Dark Knight still takes that number one spot for me. However, I thought Batman: The Animated Series was groundbreaking. You could so easily forget that you were watching a cartoon, it was wonderful. Despite keeping to the limits of Saturday morning animation, it was still brutal in parts. I loved the surrealism of "Perchance to Dream" and "Over the Edge", the latter showing Batgirl's death before the first commercials go on. The characterisation was profound and the voice acting just spectacular. Kevin Conroy totally puts Christian Bale's insipid growling to shame, and Mark Hamill is the best the Joker has sounded. He practically perfected the menacing laugh, and not once did it sound silly. There's also another big reason why the Batman universe is forever indebted to Batman TAS: Harley Quinn. The idea that the Joker's fawning gun moll was actually his psychiatrist mentally manipulated into a dependent and abusive relationship is pure genius. I also like how she and Poison Ivy team up, Harley a foil to Ivy's perpetual seriousness. Plus, the lesbian undertones are very sexy.

I loved Batman's portrayal in the Justice League animated TV series. I think he served the purpose Batman was always supposed to serve in the Justice League, the dark loner who is still an invaluable member. The dynamics between the famously anti-social Batman and the other League members were very well portrayed, particularly between him and Superman. I also liked that there was a palpable romantic connection between Wonder Woman and Batman. He could be the warrior knight to her princess, and perhaps he showed her the place men occupy in the world.
Batman has served as a stoic foil to Superman ever since the two teamed up, and I especially liked Jeph Loeb's treatment of this in the Hush storyline. However, something like that would've been difficult to translate onto film. A three-part crossover between the Batman and Superman animated series and among my favourite episodes is the "Batman/Superman story" aka "World's Finest", a marvellous tale in which the Joker gets his hands on a dragon carved entirely out of Kryptonite and tries to sell his Kryptonian-killing services to Lex Luthor, while Bruce Wayne travels to Gotham to embark on a partnership between Lexcorp and Wayne Industries to develop space exploration robotics, which Lex of course uses for weapons. One can actually watch it on YouTube in separate parts.

Speaking of YouTube, there is also a fair amount of very good Batman fanfilms out there on YouTube, which shows that even with no budget dedication and sheer fanboyness can produce some awesome results. My favourites are linked below:


Batman: Dead End Definitely one of the best-produced fanfilms around, Batman dukes it out with Predators and Aliens. Nice!
World's Finest Done by the same production team as Batman Dead End headed by Sandy Corolla, the plot of this fan trailer pretty much mirrors that of various Batman/Superman stories but is very well acted and filmed.

Grayson I'd suffer hell if I didn't mention this groundbreaking fan film. It looks like a vanity project, but one can see all the work (and money) put into this fan trailer for a film where Dick Grayson avenges the death for Batman, returning to his Robin persona.

And lastly, Batman Legends Poorer production quality than the previous films, but very good characterization of a myriad of villains, plus one of the few fanfilms out there to show the Bat family in action together.
The new Warner Premiere "DC Universe" animated films are very interesting territory, and so far a good deal of them have been good, if not downright brilliant. Some of the team from the DC Animated Universe have returned, and the studio has been turning out a steady stream of one-two animated films a year. Most of these movies have a different art style from that of the DCAU, and some boast interesting celebrity voice casts: take a gander at Keri Russell as Wonder Woman, Victor Garber as Sinestro and Neil Patrick Harris as Nightwing.

That last one is in Batman: Under The Red Hood, which was released in 2010 and is actually my favourite Batman film of all time. In terms of tone, it is dark and mature, harking back to Batman: Mask of the Phantasm and Batman Beyond: Return of the Joker. It has a strong comic-book style look and benefits from gorgeous, gorgeous animation. The movie is an adaptation of the "Under the Hood" story arc in the Batman comics, that introduced a mysterious villain calling himsef the "Red Hood", and with a disturbing knowledge of Batman and the man behind the mask. Under the Hood basically has everything going for it, from a smartly streamlined adaptational narrative, brilliant voice-acting to its gutsy, adult take on the Batman universe. The film also takes full advantage of the medium, and a good deal of the spectacular action sequences would have been all but impossible in a live-action film. The opening scene is of the Joker beating the second Robin, Jason Todd, to death. And it gets grimmer from there - however the film is always absorbing, immensely watchable and actually good fun as well. What it has that The Dark Knight lacked is a comic book aesthetic. It accepts that the story takes place in a heightened realm, and plays with that - something The Dark Knight didn't do, taking a much more grounded and realistic route with the mythos.
For the record, I think Christian Bale was brilliant. George Clooney knew it was a joke, so I'll forgive him slightly there. Sure, the lung cancer thing didn't go on too well, but Bale invested so much emotional energy into the role and took it very seriously. Most actors can only pull off either Batman (Michael Keaton) or Bruce Wayne (Val Kilmer). Christian Bale does both beautifully. He's also an impressive fighter and did some stunts and most of the martial arts work himself.


Personally, I don't quite like the Penguin as a villain enough. In the Nolan films, the villains have been spectacular and not entirely plausible but very, very grounded in reality. Oswald Cobblepot liking birds is perhaps not significant enough a quirk to justifiy him being in a Nolan Batman film. I do wish Harvey Dent was kept alive, before I saw the film I was under the impression that Two-Face would undoubtedly be the villain of a third film. 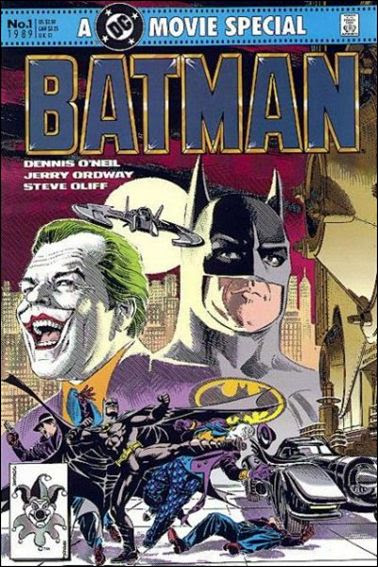 On a separate note, my best friend lent me the comic book adaptation of Batman (1989) by Dennis O'Neil and with art by Jerry Ordway and colours by Steve Oliff. It's the best comic book adaptation of a film I have read bar none. The art is amazing and the story is actually a teensy bit better than the film itself, with some very dramatic and well-drawn panels. Of course, by now this volume is very rare but it is worth searching for. Ordway also pulls off the likenesses of Michael Keaton, Jack Nicholson and Kim Basinger incredibly well.
I didn't enjoy the film itself that much (mostly because the Joker killed Batman's parents, Alfred let Vicki Vale into the Batcave and Batman goes around happily killing people) but I did enjoy the comic adaptation. I have mentioned my love-hate affair with the Burton movies in part 1.
I think Christian Bale is doing most solid work and I'm very content for him to stay in Batman's cape and cowl. However, I have contemplated Keanu Reeves as Batman, and a local movie magazine did choose him when the writing staff tried to cast Justice League. Speaking of which, Armie Hammer, who has now fame as the twins in The Social Network, was been cast as Batman in the stuck-in-development-hell Justice League live-action movie which has now been cancelled.
With regards to straight adaptations of existing comic book story arcs, I would stay as far away from filming an adaptation of The Dark Knight Returns as possible. To be completely honest, I am nowhere near a fan of most of Frank Miller's work. A grumpy retired Batman pummelling mutant rebels with a female, redheaded bespectacled Robin by his side would sound very far out to the average popcorn-munching audience, who make up the target audience as much or perhaps even more than your average fanboy. I don't think it's wise to adapt graphic novels wholesale, just take the choice parts as inspiration (which was exactly what Batman Begins and The Dark Knight did with great success). Graphic novels tend to carry a lot of baggage story-wise, which requires some background knowledge to get into. Also, being such a rich medium, things getting lost in translation are inevitable. However, my choice for big-screen treatment would be The Long Halloween and Hush, two sweeping, dramatic and exciting story arcs. Still, practicality and marketability rule out both, which consist of "everyone and their mother"-type kitchen sinks of lots and lots of characters.
Posted by Jedd the Jedi at 5:45 AM