I was going through some of my old posts on a forum, and I started a thread to discuss Batman's appearances on the big and small screen. These were forum posts and some are in response to other posts, which explains their randomness. I've compiled them into somewhat coherent musings on the many movie and TV incarnations of the Dark Knight. Warning: several spoilers follow. 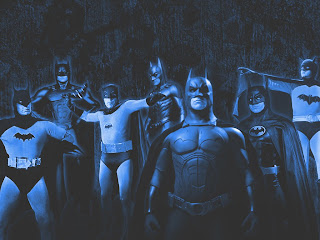 Batman is one of pop culture’s enduring icons. Over seven or so decades, the man with the ears and the cape has been relevant to every generation. I decided it would be interesting to hear discussion about the many iterations of Batman on the small and big screen, from the 40's serials and Adam West in the 60's to Batman: The Animated Series and The Dark Knight. Michael Keaton, Kevin Conroy, Christian Bale, Val Kilmer and even (ugh) George Clooney have inhabited the role of the Caped Crusader. All versions, no matter how cheesy or gaudy, have formed cornerstones of superhero media and popular culture at large.

Personally, I love the Tumbler. It has a functional military design and the concept of a Lamborghini/Hummer is fantastic, exactly what Nolan's Batman would drive. I think that the Batmobile of the Burton films was a little too showy, its turbo engine blazing even at 20 miles an hour. The sleek look was nice, but I would have loved some angular touches. The wings at the back were far too rounded. I do have to say, however, that the Bat-coccoon with the armour plating coming out from nowhere was a stylish if impractical touch. I quite like the Batmobile from the New Batman Adventures and Justice League. The newer Batmobile in The Batman is basically a souped-up, stretched-out Lamborghini with fins, and I love that design. Whenever I see a Lamborghini on the street I just imagine what it'd look like painted matte black and with two fins out the back and then get chills.


As for the appearance of Gotham City, I do have to agree that there is something oddly appealing about Anton Furst’s neo-gothic, New York-on-steroids look. However, this aesthetic was carried too far and marred beyond repair by the Schumacher era's exaggerated spires and oversized statues of naked men. I think The Batman, with its perpetually green or red night sky, perfected the neo-gothic look. I also loved the design of the slums and narrows in Batman Begins. The Gotham of The Dark Knight was possibly a little too clean and bright for me.

As for the hottest Catwoman, I think Julie Newmar and Michelle Pfeiffer kinda tie. Michelle Pfeiffer was slinky, sexy and so into character it was spellbinding. Lee Meriwether was no pushover either, but in the Adam West series nobody could beat Julie Newmar at the part. However, I really like Adrienne Barbeau's voice acting as Catwoman in Batman: TAS. She effortlessly dripped sex appeal just using her voice. I believe Gina Gershon, who voiced Catwoman in The Batman, tried to hard to follow in Barbeau's footsteps, but was still a decent version of Catwoman. And no, I'm not going to discuss Halle Berry as "Catwoman" (notice the quotation marks) at all.

Honestly, I'm not the biggest fan of the Burton movies. I liked the first one quite a bit and there were many things that they got right, but equally many things that I can't get over. For one, the Joker's death was awfully anti-climatic. The Joker's death in Batman Beyond: Return of the Joker was a far better moment and had me on the edge of my seat. By the way, I'd love if this discussion moved towards the animated series and films and away from the Burton era, but that's just me. I also couldn't stand how Vicki Vale was just let into the Batcave. Everyone loves Michael Keaton and I'll give him credit for the performance, but when he was out of the suit I just didn't buy it. Bruce Wayne has never been a skinny nerd or socially-inept geek, always a charming, handsome, debonair playboy, so that's one aspect I didn't like.

Batman Returns I thought was far too stylised and was more of a horror film and quite a pointless exercise in Burtonese. The villains, especially the Penguin and Max Shreck, were far too over-the-top and it sounded like the filmmakers were unsure whether to make it cartoonish or dark and gothic. The best thing of the film, however, was certainly Michelle Pfeiffer as Catwoman. I loved the slinky sexiness that dripped even from her words, and the crazy bits like the eyes fluttering and the bird-in-mouth sequence.
I have a love-hate sorta relationship with the Burton movies. Batman 89 was magnificent and dark, but it was nowhere as epic a treatment as I thought Batman deserved. There were many good moments, but on the whole the story wasn't solid enough for me. Over-the-top is good to an extent, but the design of Gotham and the look of the films slowly but surely degenerated into the garish, neon, naked-statue-filled cityscape of the Schumacher era. I liked how the Nolan films grounded Batman in reality. However, I prefer the look of Batman Begins to that of The Dark Knight, as the Dark Knight was just...Chicago. I enjoyed the griminess of the Docks and Narrows in Begins, and those were actually sets built in a massive soundstage. It was difficult for me not to believe that the Batcave was an actual environment, it was actually a soundstage that was partially flooded, which I found amazing. I like the look of Batman's tech in the Nolan movies as well. Lindy Hemming is a costume design goddess, having worked on James Bond and Tomb Raider. Both Batsuits were fairly realistic yet interesting to look at, and the belt, grappling gun and Batarangs were different, realistic yet stylish.
Stay tuned for Part II!
Posted by Jedd the Jedi at 8:01 PM