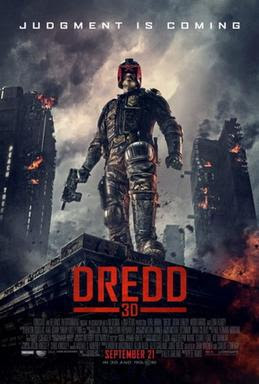 2012 has been quite the year for marquee-name superheroes: Batman, Spider-Man, the Avengers…they’ve all made quite the splash. Now, along comes the underdog: Judge Dredd, not from big guns DC or Marvel, but British sci-fi comics imprint 2000 AD. Judge Joseph Dredd has made it to the big screen once before in 1995’s Judge Dredd – though that left quite the bitter taste in the mouths of many a 2000 AD devotee. Now, everyone’s favourite helmeted future lawman hops back astride his lawmaster motorbike and into cinemas.

Our story takes place in Mega-City One, a sprawling, chaotic hellhole of a megapolis on the east coast of what was once North America. The only thing keeping the peace? The Judges of the Hall of Justice, specially trained and equipped men and women who form an ultra-police force of sorts. Joseph Dredd (Urban) is one such Judge, and today he’s tasked with assessing newbie Judge Cassandra Anderson (Thirlby) by taking her out for her first day in the field. She may not look like she has what it takes, but Anderson is a powerful psychic empath, her skills a valuable asset to the Judges. Dredd and Anderson go to investigate a triple homicide in the mega-apartment complex Peach Trees, arresting clansman Kay (Wood Harris) - only to find themselves trapped in the locked-down building by the ruthless drug lord Ma-Ma (Headey), Ma-Ma bent on ensuring the Judges have no chance to take Kay to interrogation. It’s 200 storeys of hell for Dredd and Anderson – and judgement day for the scores of Ma-Ma’s henchmen out for their blood.

A common complaint among us moviegoers these days is that Hollywood seems to be falling back increasingly on ‘reboots’, ‘remakes’ and ‘re-imaginings’, that it seems studio executives are content with coasting on an established franchise’s name as opposed to coming up with something original. However, if ever there was a character and a movie who needed a reboot, it would definitely have to be Judge Dredd. The 1995 film left a sour taste in the mouths of 2000 AD devotees – the tone was all wrong, it was way too clean and commercialized, and Sylvester Stallone seemed to have huge amounts of trouble trying to pronounce the word ‘law’. The folks at 2000 AD seemed to share this sentiment, and legend has it that Judge Dredd’s co-creator John Wagner walked up to Stallone on the set of the film and told him “you’re shooting the wrong script.” Ouch.

It’s safe to say that 2012’s Dredd is an exponential improvement. The first thing this one’s gotten right is the tone. The 1995 Judge Dredd was much too colourful and soft, but here we get the impression that Mega-City One is truly the nastiest, nastiest place anyone could ever have the misfortune of calling home. It’s been noted that many recent films set in futuristic dystopias compromise a tad, with elements that still make that world look attractive – well, Dredd isn’t one of them. Its milieu is unflinchingly depressing, as raw a portrait of a city gone to hell in a hand basket as you’ll ever see onscreen.  This realm of grim squalor is one where it would make sense to have a police force on steroids, as it would seem to be the only way to even attempt to keep things in check, and the filmmakers have successfully sold  this conceit. The illicit substance ‘slo-mo’, a drug that makes time seem like it’s passing at 1% its normal speed, is a great excuse for some flashy slow-motion shots that may seem gimmicky, but are honestly a nice break from the intensity of it all.

And how about Dredd himself? Once again, this film has topped its predecessor by leaps and bounds, Karl Urban is a far, far better fit for the character than Stallone ever was. Urban marshals a tough, uncompromising figure of justice, expertly balancing the sides of underappreciated do-gooder and tough, no-nonsense supercop. In the hands of a less-skilled actor, Dredd could have easily become a laughable, overly-posturing caricature of macho bravado. However, Urban plays the part with remarkable restraint, and it is also admirable that he turns in such a riveting performance with his eyes obscured by his visor for the whole film (as it should be) – the eyes being one of the greatest tools any actor has in his/her arsenal.

Olivia Thirlby is a revelation as Judge Anderson, and this could well her breakout role. She is fresh-faced and beautiful, a rookie out of her depth but one who musters up every ounce of courage to hide her fear and face the harshness of the outside world head-on. Anderson’s conflict regarding excessive uses of force and the brutal nature of the job is handled laudably by Thirlby; instead of slouching in a corner bawling “I DON’T WANT TO SHOOT THAT MAN!” she’s able to convey the muted turmoil in quite an understated fashion. There’s a fantastic scene where she enters Kay’s mind, and as he tries to shock her with ghastly mental images, she gamely one-ups the lowlife with mind games of her own. The other female presence Lena Headey makes for an intimidating villainess, a large scar marring the actress’s normally-gorgeous visage. Thing is, Ma-Ma isn’t a particularly memorable or remarkable villain, and truth be told she doesn’t do much, spending much of the film dictating her mooks as they do her dirty work for her.

This leads us to the weaknesses of the film. The story is laid out in pretty familiar fashion – it’s our heroes trapped in the wrong place at the wrong time, the odds stacked 200 storeys against them, having to fight their way to the big boss at the top floor. It’s quite Die Hard, and really, really reminded this reviewer of the Indonesian sleeper hit martial arts movie The Raid: Redemption. It’s just not a particularly interesting premise, and means the action is largely confined within the Peach Trees complex. This is a way of working around the limited $45 million budget, we suppose, but ends up becoming quite formulaic. There are also issues with the pacing, and the film drags itself out considerably, leading up to what can be considered a lackluster climax. Most of the film consists of Dredd taking on or running away from scores of thugs, which can get a little bland after a while. There is a fantastic action sequence set in a drug lab which pits Dredd against three corrupt fellow Judges, and this reviewer would have loved to see more scenes of this nature that allow Dredd to truly show off how much of a badass he is. The 3D is halfway-decent, but results in an already dimly-lit film looking even darker because of the polarization.

Dredd lays the groundwork for what has the potential to be a truly incredible, refreshingly visceral comic book movie franchise. It pulls no punches with its hard violence that’s sure to get some squirming in their seats, and seems to have nary a sense of Hollywood mega-studio artificiality to it. It’s just that the story of this film probably isn’t the best that could have taken place in the environment, and hopefully a sequel comes along that will progress the grim world of Mega-City One even further.

SUMMARY: Dredd serves up Urban justice on a plate, and in terms of style and tone is exactly what 2000 AD fans will wholeheartedly enjoy. However, this is clearly just to lay the Mega-City’s foundations, and hopefully will be followed up with more compelling and exciting entries to come.

Jedd Jong
Posted by Jedd the Jedi at 5:39 PM