A Good Day to Die Hard


A GOOD DAY TO DIE HARD

Some of you out there may remember the 1951 film An American in Paris, or even the George Gershwin composition that inspired it. Well, here we have An American in Moscow; the American in question being none other than John McClane, possibly the most iconic character Bruce Willis has played.
In this, the fifth instalment in the Die Hard franchise, McClane hears of his son John “Jack” McClane Jr. (Courtney) getting into trouble in Moscow and being thrown into jail, so he flies over to look into the situation and bring his son home. What he doesn’t know is that Jack is an undercover CIA agent caught in the middle of a potential crisis, and the older McClane’s presence throws a spanner in the works, much to the chagrin of his estranged son. They are soon drawn into a terrorist plot involving Russian defence minister Chagarin (Sergei Kolesnikov) and his former partner Komarov (Koch), whom he has taken as a political prisoner. Then there’s the small matter of a stockpile of weapons-grade uranium hidden away at Chernobyl. 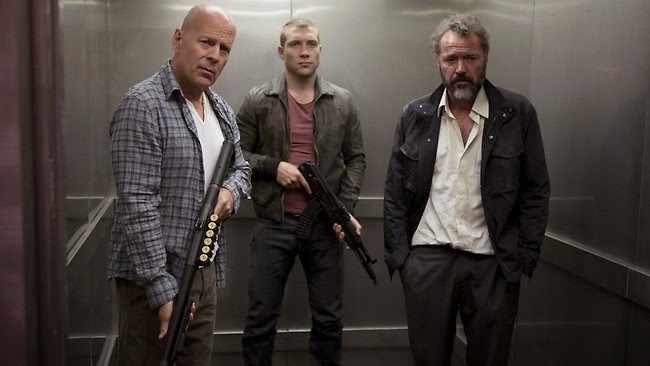 The original Die Hard, from way back in 1988, has become something of a landmark among action films and is generally revered by genre aficionados. It became the basis of a successful franchise that has brought us to this place – this, unfortunately enough, very disappointing place. Some felt the fourth film didn’t live up to the legacy, but this reviewer found it quite entertaining.
Alas, that’s not the case with A Good Day to Die Hard. It seems that all of the creativity and innovation of the series has been sucked dry, and what we’re left with is a generic action flick with Bruce Willis dropped into the middle of it. At the hands of director John Moore of Max Payne infamy, the film becomes a messy collision of shaky-cam shots, quick, choppy editing and action scenes that are difficult to follow. There isn’t any of that old-school action movie feel that a Die Hard film should possess, that’s been replaced with a stale, production-line flavour. 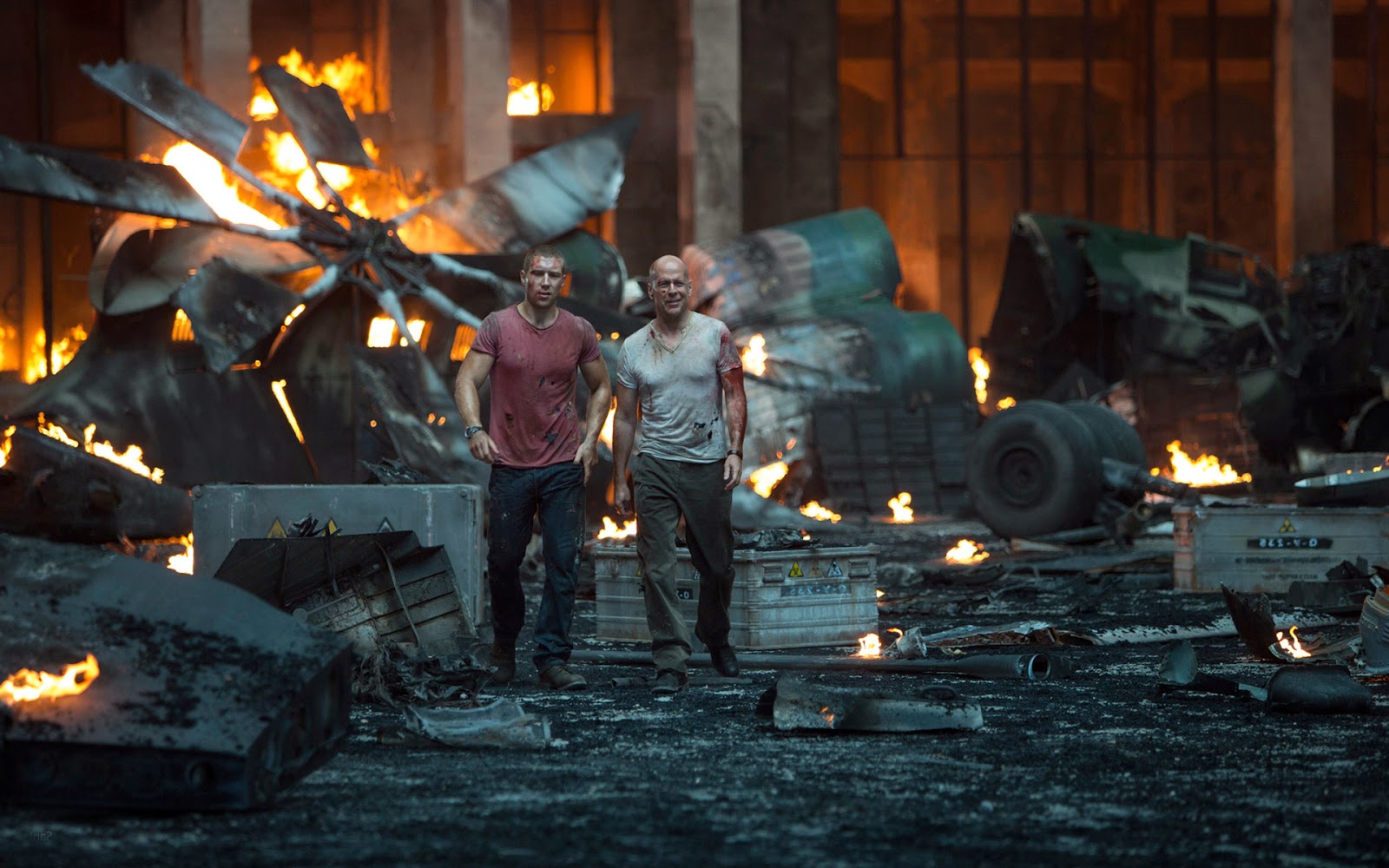 This reviewer was actually really looking forward to this film and hoping to enjoy it. There’s potential here: setting the film in Moscow means that New York City cop John McClane gets to be a fish out of water, and having his son be a CIA agent better-equipped than he is, making him the one out of his depth, could have turned out intriguingly as well. However, the film doesn’t quite take advantage of its Russian setting, and having the climax take place at the abandoned Chernobyl power plant is rather on the nose, and even then the locale doesn’t feel sufficiently distinct.
Giving an ageing action hero a son as his sidekick is not a new idea – Indiana Jones and the Kingdom of the Crystal Skull did it to not much success. However, Jack McClane turns out to be a typical contemporary action hero, Australian actor Jai Courtney giving off Sam Worthington vibes. There’s just nothing that defines him as John McClane’s son, and while there are some fun father-son moments and there’s a decent dynamic between the two, their relationship is paper-thin and far from central to the story, which should be the case. At least Courtney doesn’t come off as annoying. 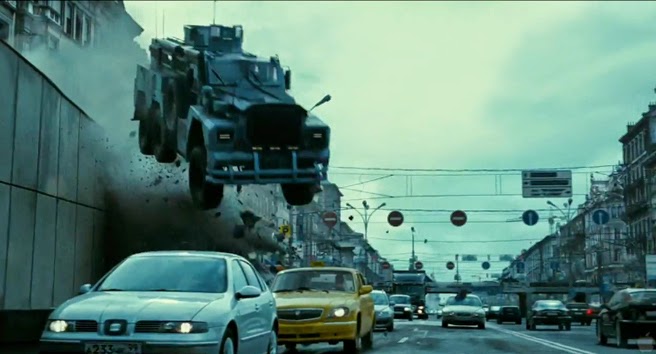 Well, since it’s an action movie first and foremost, how are the action scenes? As mentioned earlier, the constantly shuddering camera makes the action sequences border on the incomprehensible, and a lot of them are rather messily staged. It’s not all bad though: there’s an elaborate car chase early in the film which features lots of high-impact collisions and various automobiles being bashed off the street and some fun stuff with a heavy-duty Mil Mi-26 helicopter, but in the end it doesn’t add up to enough visually. And also remember the complaints that the fourth movie made McClane seem like a superhero? Well, the father-and-so duo take insane amounts of punishment here, it’s nothing short of a miracle that they didn’t emerge utterly pulverised. 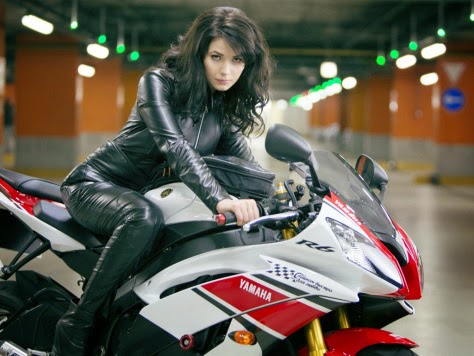 The villains aren’t memorable at all, and falling back on the “Russians-with-nukes” story device without putting a new spin on it or wrapping it in anything more interesting, the way Mission Impossible: Ghost Protocol did, is tired and lazy. Screenwriter Skip Woods manages to make what should be a straightforward action flick confusing to sit through. Bruce Willis could sleepwalk through one of these movies, and at times it seems like he almost does. But it’s still nice to hear John McClane crack wise and see him throw a good punch or two – too bad he doesn’t have a beat-down with any of the main villains.
And to top it all off, it seems that here in Singapore, the F-bombs are muted out in order for the film to get a PG-13 rating, which is abrupt and distracting. It also means the hero’s memorable catchphrase is completely mangled, and that's even worse than it getting cut off by a gunshot as in the theatrical cut of the fourth movie.
SUMMARY: John McClane and his son have a very disappointing day out.
RATING: 2 out of 5 Stars
Jedd Jong
Posted by Jedd the Jedi at 7:59 PM