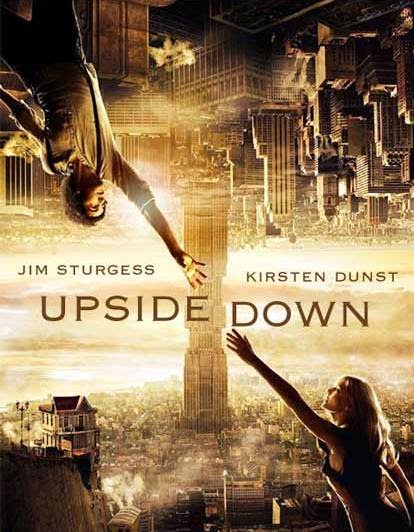 “Did you think that your feet had been bound/ by what gravity brings to the ground?” So go the lyrics to Peter Gabriel’s “Down to Earth”, from WALL-E. Just as that film was a high-concept science fiction romance, so is Upside Down.
Well, sort of.
This French-Canadian film stars Jim Sturgess as Adam, who lives on a planet much like Earth, except that it has “dual gravity” – two worlds are separated from each other, the prosperous realm of “Up Above” casting its shadow, quite literally, on the lower-class citizens of “Down Below”. Adam is from Down, and a forbidden love between him and Eden (Dunst) from Up blossoms, as they meet for secret rendezvouses between the mountains of both worlds. Following an accident, Adam believes Eden to be dead, but catches a glimpse of her on TV, and so he gets himself employed by Trans World, the mega corporation that provides the only link between the two worlds, so he can chase the girl of his dreams.

Stories about star-crossed lovers are nothing new. From the Chinese myth of the Weaver and the Cowherd to Romeo and Juliet, from Jack and Rose to Anakin and Padme, we’ve long been fascinated by the idea of two people who must cross incredible boundaries to be together. Upside Down’s premise seems ingenious and very creative at first – how about have the force of gravity separate our male and female leads? However, it turns out that there is nothing more to it than that.
There is very little character development, and we learn next to nothing about Adam and Eden throughout the film. If their love transcends the force of gravity, then why is it so thoroughly uninteresting? The symbolism is heavy-handed (the leads are called “Adam” and “Eden”), and this is yet another poor-boy-falls-love-with-rich-girl tale, a formula which the filmmakers add precious little to. Though cosmic forces are keeping the two apart, it doesn’t seem like there’s much at stake. The film struggles to stay in line with its internal logic regarding the way the “dual gravity” works, and inconsistencies mar what seems like a clever idea, eventually exposing its inherent flaws that writer-director Solanas was probably unaware of as he was crafting the story.

Jim Sturgess and Kirsten Dunst and both talented actors, but saddled with an exposition-heavy opening narration that outlines the rules that govern this strange planet, Sturgess’s voice strains with mock wonderment. Kirsten Dunst seems rather detached from her role, though she does get to reprise some of the upside-down kissing she made famous in Spider-Man. Both have somewhat stilted line delivery that is certainly not helped by the clumsy dialogue. The only other character of note is Timothy Spall’s Bob, Adam’s colleague at Trans World who helps him find Eden – but it’s a comic role Spall can do in his sleep.
It would be a sin to completely write off Upside Down though, because credit is due to Solanas and his team for at least daring to try something different, and something so technically difficult to film. This is a very visual-effects heavy movie, what with the two opposing worlds and their respective gravities, and despite the Hollywood leads, it’s essentially a foreign film and not a big studio production, and it looks all the more impressive with that taken into consideration. It’s a stylish picture for sure, and many shots look straight out of a Chris Van Allsburg-esque picture book.

Unfortunately, this is one of those movies that is fascinating visually, but only on that level. There’s probably a compelling love story to be found somewhere in Upside Down, but it is left completely unmined, and audiences will have to make do with a simplistic and aimless plot, and a romance that never captivates. One can suspend disbelief – but what goes up must come down, and this movie does so with a clatter.
SUMMARY: Beautiful visual effects and art direction can’t stop this half-baked sci-fi fantasy romance from falling apart (and up, and down).
RATING: 2 out 5 STARS
Jedd Jong
Posted by Jedd the Jedi at 2:11 AM