A Song Sung Blue (and Green): The Plight of the Visual Effects Artist

As published in F*** Magazine issue 39 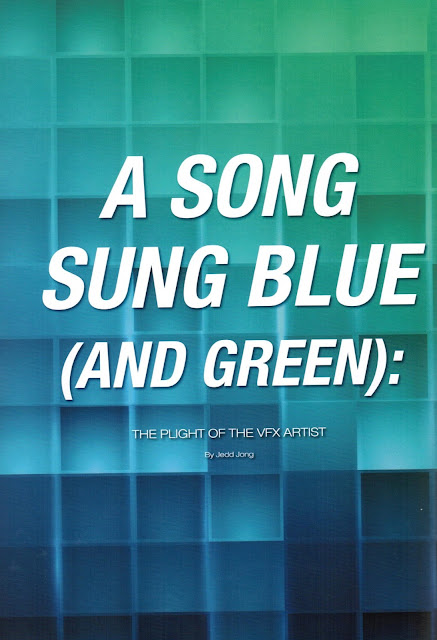 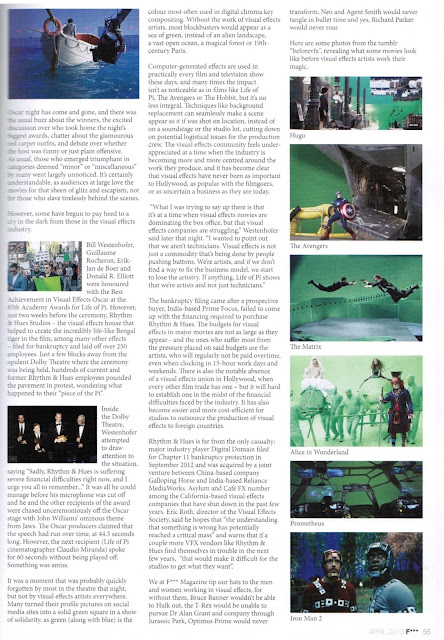 
A SONG SUNG BLUE (AND GREEN):
THE PLIGHT OF THE VFX ARTIST

Oscar night has come and gone, and there was the usual buzz about the winners, the excited discussion over who took home the night’s biggest awards, chatter about the glamourous red carpet outfits, and debate over whether the host was funny or just plain offensive. As usual, those who emerged triumphant in categories deemed “minor” or “miscellaneous” by many went largely unnoticed. It’s certainly understandable, as audiences at large love the movies for that sheen of glitz and escapism, not for those who slave tirelessly behind the scenes.

However, some have begun to pay heed to a cry in the dark from those in the visual effects industry.

Bill Westenhofer, Guillaume Rocheron, Erik-Jan de Boer and Donald R. Elliott were honoured with the Best Achievement in Visual Effects Oscar at the 85th Academy Awards, for Life of Pi. However, just two weeks before the ceremony, Rhythm & Hues Studios – the visual effects house that helped to create the lifelike Bengal tiger in the film, among many other effects – filed for bankruptcy and laid off over 250 employees. Just a few blocks away from the opulent Dolby Theatre where the ceremony was being held, hundreds of current and former Rhythm & Hues employees pounded the pavement in protest, wondering what happened to their “piece of the Pi”.

Inside the Dolby Theatre, Westenhofer attempted to draw attention to the situation, saying “Sadly, Rhythm & Hues is suffering severe financial difficulties right now, and I urge you all to remember...” It was all he could manage before his microphone was cut off and he and the other recipients of the award were chased unceremoniously off the Oscar stage with John Williams’ ominous theme from Jaws. The Oscar producers claimed that the speech had run over time, at 44.5 seconds long. However, the next recipient (Life of Pi cinematographer Claudio Miranda) spoke for 60 seconds without being played off. Something was amiss.

It was a moment that was probably quickly forgotten by most in the theatre that night, but not by visual effects artists everywhere. Many turned their profile pictures on social media sites into a solid green square in a show of solidarity, as green (along with blue) is the colour most often used in digital chroma key compositing. Without the work of visual effects artists, most blockbusters would appear as a sea of green, instead of an alien landscape, a vast open ocean, a magical forest or 19th Century Paris.

Computer-generated effects are used in almost every film and television show these days, and many times the impact isn’t as noticeable as in films like Life of Pi, The Avengers or The Hobbit, but no less integral. Techniques like background replacement can seamlessly make a scene appear as it if was shot on location, instead of on a soundstage or the studio lot, cutting down on potential logistical issues for the production crew. The visual effects community feels under-appreciated at a time when the industry is becoming more and more centred around the work they produce, and it has become clear that visual effects have never been as important to Hollywood, as popular with the filmgoers, or as uncertain a business as they are today.

“What I was trying to say up there is that it’s at a time when visual effects movies are dominating the box office, but that visual effects companies are struggling,” Westenhofer said later that night. "I wanted to point out that we aren't technicians. Visual effects is not just a commodity that’s being done by people pushing buttons. We're artists, and if we don't find a way to fix the business model, we start to lose the artistry. If anything, Life of Pi shows that we're artists and not just technicians."

The bankruptcy filing came after a prospective buyer, India-based Prime Focus, failed to come up with the financing required to purchase Rhythm & Hues. The budgets for visual effects in major movies are not as large as they appear - and the main place to put pressure on said budgets are the artists, who will regularly not be paid overtime, even when working 15 hour work days and weekends. There is also the notable absence of a visual effects union in Hollywood, when every other film trade has one – but it will be hard to establish one in the midst of the financial difficulties faced by the industry. It has also become easier and more cost-efficient for studios to outsource the production of visual effects to foreign countries.

Rhythm & Hues is far from the only casualty: major industry player Digital Domain filed for Chapter 11 bankruptcy protection in September 2012 and was acquired by a joint venture between China-based company Galloping Horse and India-based Reliance MediaWorks. Also, Asylum and Café FX number among the California-based visual effects companies that have shut down in the past few years. Eric Roth, director of the Visual Effects Society, said he hopes that “the understanding that something is wrong has potentially reached a critical mass” and warns that if a couple more VFX vendors like Rhythm & Hues find themselves in trouble in the next few years,  “that would make it difficult for the studios to get what they want.”

We at F*** Magazine tip our hats to the men and women working in visual effects, for without them Bruce Banner wouldn’t be able to Hulk out, the T-rex would be unable to pursue Dr Alan Grant and company through Jurassic Park, Optimus Prime would never transform, Neo and Agent Smith would never tangle in bullet time and yes, Richard Parker would never roar.

Please visit the tumblr Before VFX to have a look at what some of today's biggest films would look like without the work of armies of visual effects artists.