Star Trek Into Darkness: All Hands on Holodeck 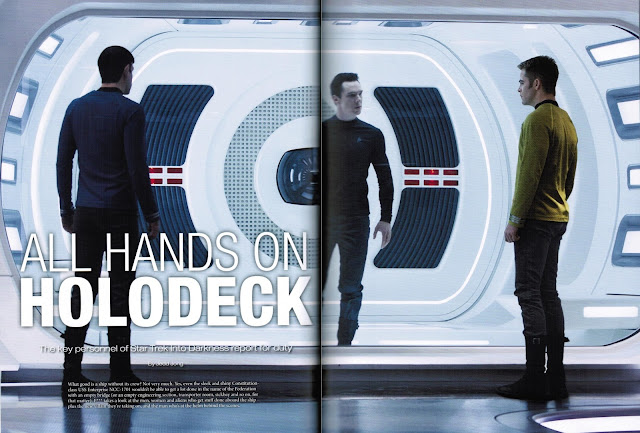 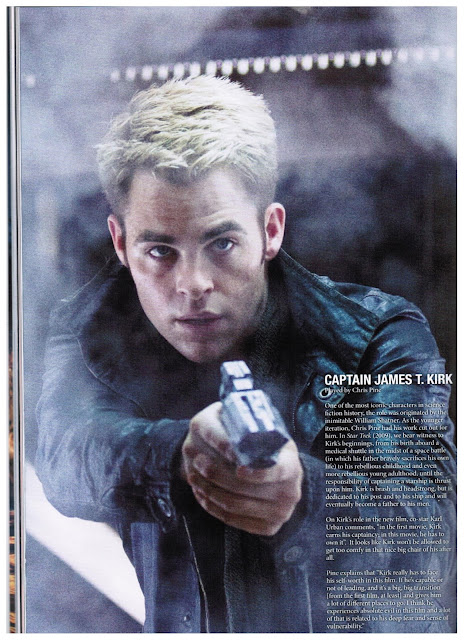 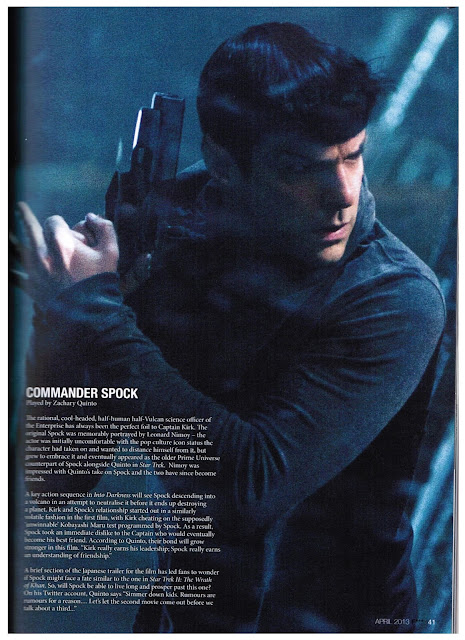 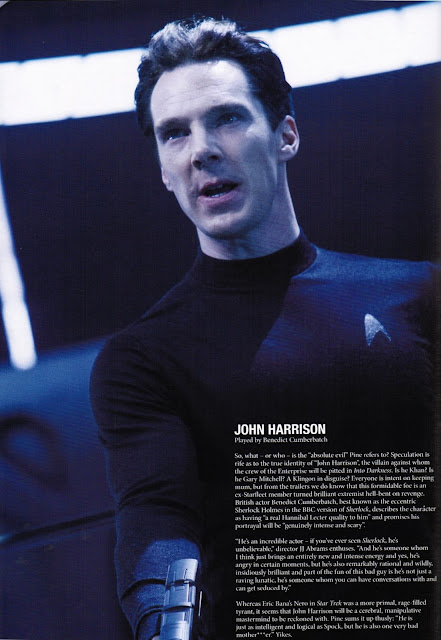 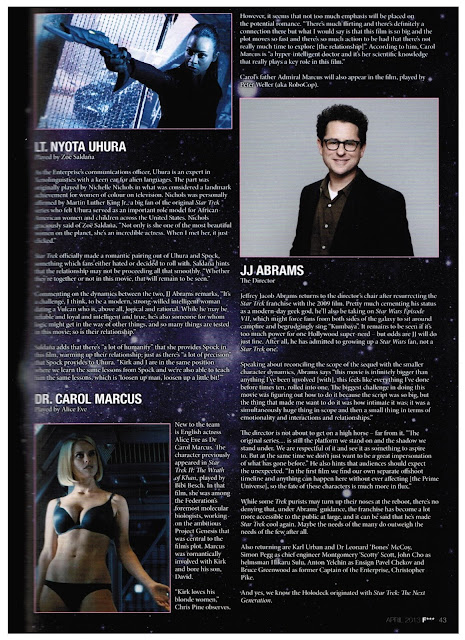 
ALL HANDS ON HOLODECK

What good is a ship without its crew? Not very much. Yes, even the sleek and shiny Constitution-class USS Enterprise NCC-1701 wouldn’t be able to get a lot done in the name of the Federation with an empty bridge (or an empty engineering section, transporter room, sickbay and so on, for that matter). F*** takes a glance at the men, women and aliens who get stuff done aboard the ship – plus the new villain they’re taking on, and the man at the helm behind the scenes.

One of the most iconic characters in science fiction history, the role was originated by the inimitable William Shatner, and as the younger iteration, Chris Pine had his work cut out for him. In Star Trek (2009), we witnessed Kirk’s beginnings, from his birth aboard a medical shuttle in the midst of a space battle (in which his own father bravely sacrifices his life) to his rebellious childhood and even more rebellious young adulthood, until the responsibility of captaining a starship was thrust upon him. Kirk is brash and headstrong, but is dedicated to his post and to his ship and will eventually become a father to his men.

On Kirk’s role in the new film, co-star Karl Urban comments, “in the first movie Kirk earns his captaincy, in this movie he has to own it”.  It looks like Kirk won’t be allowed to get too comfy in that nice big chair of his after all.

Pine explains that “Kirk really has to face his self-worth in this film. If he’s capable or not of leading, and from the first one at least, is a big, big transition and gives him a lot of different places to go, I think he experiences and sees absolute evil in this film and a lot of that is related to his deep fear and sense of vulnerability.”

So, what is the “absolute evil” Pine refers to? Speculation is rife as to the true identity of “John Harrison”, the villain whom the crew of the Enterprise will be pitted against in Into Darkness. Is he Khan? Is he Gary Mitchell? A Klingon is disguise? Everyone is intent on keeping mum, but from the trailers we do know that this formidable foe is an ex-Starfleet member turned brilliant extremist hell-bent on revenge.  English actor Benedict Cumberbatch describes the character as having “a real Hannibal Lecter quality to him” and promises his portrayal will be “genuinely intense and scary”. The fact that he recorded his audition tape on a friend’s iPhone in his kitchen will probably do nothing to diminish that.

“In terms of Benedict, he’s an incredible actor if you’ve ever seen Sherlock, he’s unbelievable,” director JJ Abrams enthuses. “And he’s someone whom I think just brings an entirely new and intense energy and yes, he’s angry in certain moments, but he’s also remarkably rational and wildly, insidiously brilliant and part of the fun of this bad guy is he’s not just a raving lunatic, he’s someone who actually, you have conversations and can get seduced by.”

Sequels usually place the focus on their villains, and Eric Bana’s Nero in Star Trek (2009) was a more primal, rage-filled tyrant, it seems that John Harrison will be a cerebral, manipulative mastermind to be reckoned with. Pine sums it up like this: “he is just as intelligent and logical as Spock, but he is also one very bad mother***er.” Yikes.

The rational, cool-headed half-human half-Vulcan science officer of the Enterprise has always been the perfect foil to Captain Kirk. Spock was memorably portrayed by Leonard Nimoy – the actor was initially uncomfortable with the pop culture icon status the character had taken on and wanted to distance himself from it, but grew to embrace the character and appeared as the older Prime Universe counterpart of Spock alongside Quinto in Star Trek (2009).  Nimoy was impressed with Quinto’s take on Spock and the two have since become friends.

A key action sequence in Into Darkness will see Spock descending into a volcano to attempt to neutralize it before it ends up destroying a planet. Kirk and Spock’s relationship has been similarly volatile, with Spock taking an immediate dislike to the Captain who would eventually become his best friend, after Kirk cheated on the “unwinnable” Kobayashi Maru test Spock had programmed. According to Quinto, their bond will grow stronger in this film. “Kirk really earns his leadership; Spock really earns an understanding of friendship.”

A brief section of the Japanese trailer for the film has led fans to wonder if Spock might face a fate similar to the one in Star Trek II: The Wrath of Khan. So, will Spock be able to live long and prosper past this one? On his Twitter account, Quinto says “simmer down kids. Rumours are rumours for a reason…Let’s let the second movie come out before we talk about a third...”

As the Enterprise’s communications officer, Uhura is an expert in Xenolinguistics with a keen ear for alien languages. The part was originally played by Nichelle Nichols in what was considered a landmark for women of colour on television. Nichols was personally affirmed by Martin Luther King Jr., a big fan of the original Star Trek series who felt Uhura served as an important role model for African-American women and children across the United States. Nichols graciously said of Zoë Saldaña, “not only is she one of the most beautiful women on the planet, she’s an incredible actress. When I met her, it just clicked like that.”

Star Trek (2009) officially made a romantic pairing out of Uhura and Spock, something which fans either hated or decided to roll with. Saldaña hints that the relationship may not go all that smoothly, saying “whether they’re together or not in this movie, that will remain to be seen.”

Commenting on the dynamics between the two, JJ Abrams remarks, “it’s a challenge I think to be a modern, strong-willed intelligent woman dating a Vulcan who is, above all, logical and rational and so while he may be reliable and loyal and intelligent and true, he’s also someone for whom logic might get in the way of other things, and so many things are tested in this movie; so is their relationship.”

New to the team is English actress Alice Eve as Dr Carol Marcus. The character previously appeared in Star Trek II: The Wrath of Khan, played by Bibi Besch. In that film, she was among the Federation’s foremost molecular biologists, working on the ambitious Project Genesis that was central to the film’s plot. Marcus was romantically involved with Kirk and bore his son, David.

“Kirk loves his blonde women,” Chris Pine observes.  However, it seems that not too much emphasis will be placed on the potential romance. “There’s much flirting and there’s definitely a connection there but what I would say is that this film is so big and the plot moves so fast and there’s such action to be had that there’s not really much time to explore (the relationship)”. According to him, Carol Marcus is “a hyper-intelligent doctor and it’s her scientific knowledge that really plays a key role in this film.”

Carol’s father Admiral Marcus will also appear in the film, played by Peter Weller (aka RoboCop).

Jeffrey Jacob Abrams returns to the director’s chair after resurrecting the Star Trek franchise with the 2009 film. Pretty much cementing his status as modern day geek god, he’ll also be taking on Star Wars Episode VII, which might force fans from both sides of the galaxy to sit around campfire and begrudgingly sing “Kumbaya”. It remains to be seen if it’s too much power for one Hollywood super-nerd – but odds are JJ will do just fine. After all, he has admitted to growing up a Star Wars fan, not a Star Trek one.

Speaking about reconciling the scope of the sequel with the smaller character dynamics, Abrams says “this movie is infinitely bigger than anything I’ve been involved (with), this feels like everything I’ve done before times ten, rolled into one. The biggest challenge in doing this movie was figuring out how to do it because the script was so big, but the thing that made me want to do it was how intimate it was, it was a simultaneously huge thing in scope and then a small thing in terms of emotionality and interactions and relationships.”

The director is not about to get on a high horse – far from it. “The original series…is still the platform we stand on and the shadow we stand under. We are respectful of it and see it as something to aspire to. But at the same time we don’t just want to be a great impersonation of what has gone before.” He also hints that audiences should expect the unexpected. “In the first film we find our own separate offshoot timeline and anything can happen here without ever affecting that (the Prime Universe), so the fate of these characters is much more in flux.”
While some Trek purists may turn up their noses at the reboot, there is no denying that under Abrams’ guidance, the franchise has become a lot more accessible to the public at large, and it can be said that he’s made Star Trek cool again. Maybe the needs of the many do outweigh the needs of the few after all.

And yes, we know the Holodeck originated with Star Trek: The Next Generation.