Holding Out For An Anti-Hero 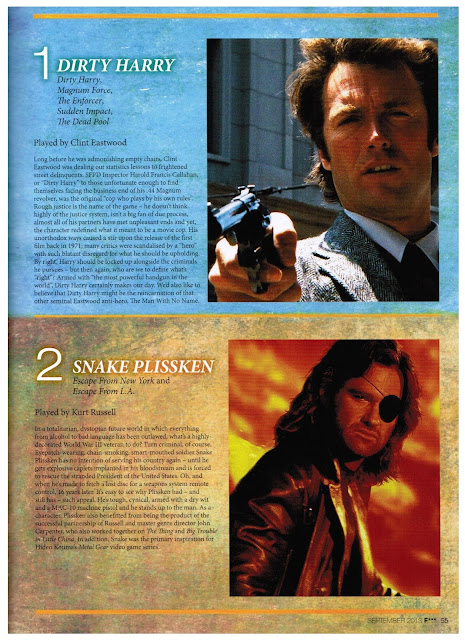 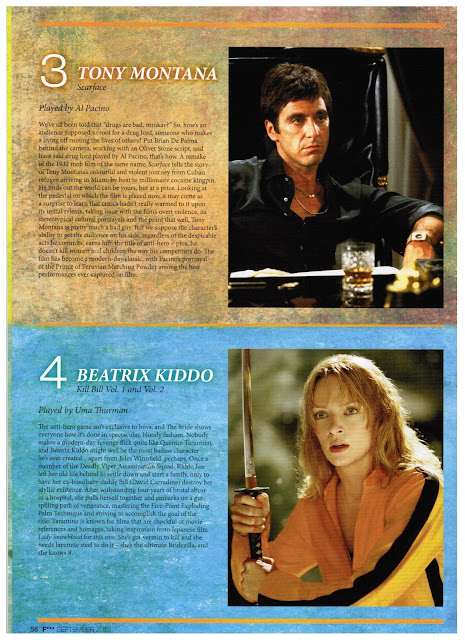 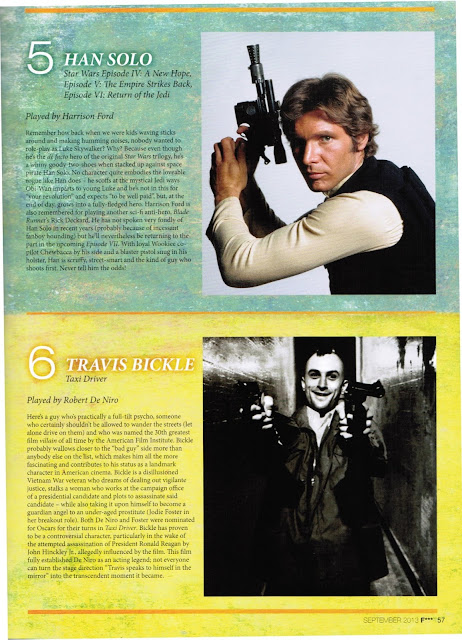 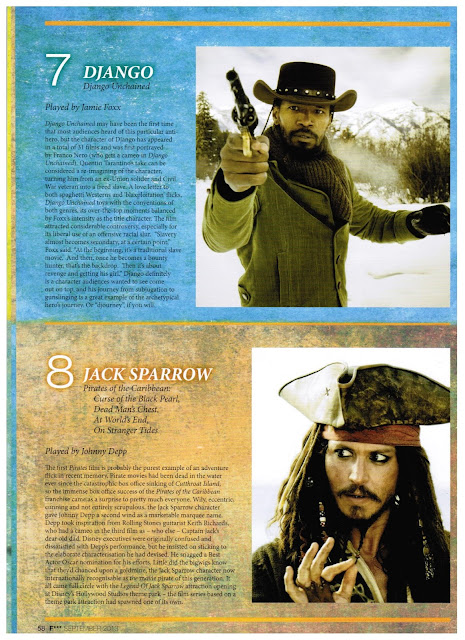 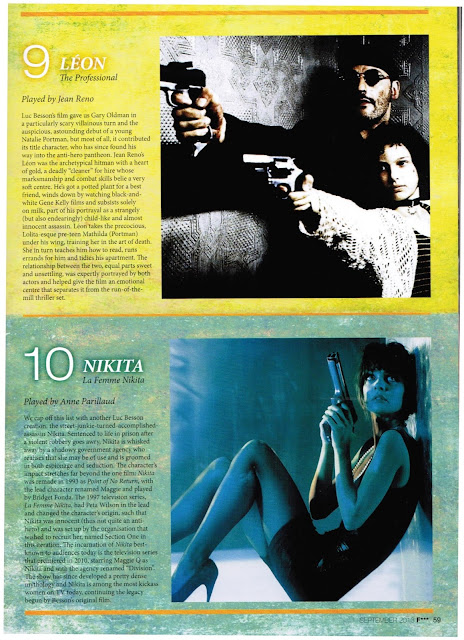 Consider this question and answer honestly, dear reader: who’s more compelling – the knight in shining armour or the enigmatic archer who sneaks through the shadows, stealing from the rich to give to the poor? We love our heroes and our villains too, but perhaps the characters who draw the strongest response are those who fall into the grey area. Be it the hitman with a heart of gold or the pirate who’s in it for the money but is eventually swayed towards a noble cause, everyone loves a protagonist with a dangerous streak. As one of the coolest of such characters, Richard B. Riddick, returns to cinemas, we celebrate the top ten anti-heroes in cinema history (in no particular order of course, we’d rather not anger any of the badasses on this list).

Long before he was admonishing vacant chairs, Clint Eastwood was dealing out statistics lessons to frightened street delinquents. SFPD Inspector Harold Francis Callahan, or “Dirty Harry” to those unfortunate enough to find themselves facing the business end of his .44 Magnum revolver, was the original “cop who plays by his own rules”. Rough justice is the name of the game – he doesn’t think highly of the justice system, isn’t a big fan of due process, almost all of his partners have met unpleasant ends and yet, the character redefined what it meant to be a movie cop. His unorthodox ways caused a stir upon the release of the first film back in 1971; many critics scandalised by a “hero” with such blatant disregard for what he should be upholding. By right, Harry should be locked up alongside the criminals he pursues – but then again, who are we to define “right”? Armed with “the most powerful handgun in the world”, Dirty Harry certainly makes our day. We’d also like to believe that Dirty Harry might be the reincarnation of the other seminal Eastwood antihero, The Man with No Name.

In a totalitarian, dystopian future world in which everything from alcohol to bad language has been outlawed, what’s a highly-decorated World War III veteran to do? Turn criminal, of course. The eye patch-wearing, chain-smoking, smart-mouthed soldier had no intention on serving his country again – until he gets explosive caplets implanted in his blood stream and is forced to rescue the stranded President of the United States. And when he’s made to fetch a lost disk for a weapons system remote control, 16 years later. It’s easy to see why Plissken had – and still has – such appeal. He’s tough, cynical, armed with a dry wit and a MAC-10 machine pistol and he stands up to the man. As a character, Plissken also benefitted from being the product of the successful partnership of Russell and master genre director John Carpenter, who also worked together on The Thing and Big Trouble in Little China. In addition, Snake was the primary inspiration for Hideo Kojima’s Metal Gear video game series.

We’ve all been told that “drugs are bad, mmkay?” So, how’s an audience supposed to root for a drug lord, someone who makes a living off ruining the lives of others? Put Brian De Palma behind the camera working with an Oliver Stone script and have said drug lord played by Al Pacino, that’s how. A remake of the 1932 mob film of the same name, Scarface tells the story of Tony Montana’s colourful and violent journey from Cuban refugee arriving in Miami by boat to millionaire cocaine kingpin. He finds out the world can be yours, but at a price. Looking at the pedestal on which the film is placed now, it may come as a surprise to learn critics weren’t all that warm upon its initial release, taking issue with the film’s overt violence, its stereotypical cultural portrayals and the point that well, Tony Montana is pretty much a bad guy. But we suppose the character’s ability to get the audience on his side, regardless of the despicable acts he commits, earns him the title of antihero – plus, he doesn’t kill women and children the way his competitors do. The film has become a modern-day classic, with Pacino’s portrayal of the Prince of Peruvian Marching Powder among the best performances ever captured on film.

The antihero game isn’t exclusive to boys, and The Bride shows everyone how it’s done in spectacular, bloody fashion. Nobody quite makes a modern-day revenge flick like Quentin Tarantino, and Beatrix Kiddo might well be the most badass character he’s created…perhaps apart from Jules Winnfield. Once a member of the Deadly Viper Assassination Squad, Kiddo has left her old life behind to settle down and start a family, only to have her ex-boss/baby daddy Bill (David Carradine) destroy her idyllic existence. After withstanding four years of brutal abuse in a hospital, she pulls herself together and embarks on a gut-spilling path of vengeance, mastering the Five-Point Exploding Palm Technique and striving to accomplish the goal of the title. Tarantino is known for films that are chock-full of movie references and homages, taking inspiration from the Japanese film Lady Snowblood for this one. She’s got vermin to kill and she needs Japanese steel to do it – she’s the ultimate Bridezilla, and she knows it.

Remember how back when we were kids waving around sticks and making humming noises, nobody wanted to role play as Luke Skywalker? Why? Because even though he’s the de-facto hero of the original Star Wars trilogy, he’s a whiny goody two shoes when stacked up against space pirate Han Solo. No character quite embodies the loveable rogue like Han does – he scoffs at the mystical Jedi ways Obi-Wan imparts to young Luke and he’s not in this for “your revolution” and expects “to be well paid”, but at the end of day, grows in a fully-fledged hero. Harrison Ford is also remembered for playing another sci-fi antihero, Blade Runner’s Rick Deckard. He has not spoken very fondly of Han Solo in recent years (probably because of incessant fanboy hounding) but odds are, he will return to the part in the upcoming Episode VII. With loyal Wookiee co-pilot Chewbacca by his side and a blaster pistol snug in his holster, He’s scruffy, street smart and the kind of guy who shoots first. Never tell him the odds!

Here’s a guy who’s practically a full-tilt psycho, someone who certainly shouldn’t be allowed to wander the streets (let alone drive on them) and who was named the 30th greatest film villain of all time by the American Film Institute. Bickle probably wallows closer to the “bad guy” side more than anybody else on the list, which makes him all the more fascinating and contributes to his status as a landmark character in American cinema. The character is a disillusioned Vietnam War veteran who dreams of dealing out vigilante justice, stalks a woman who works at the campaign office of a Presidential candidate and plots to assassinate said candidate but also takes it upon himself to become a guardian angel to an under-aged prostitute (Jodie Foster in her breakout role). Both De Niro and Foster were nominated for Oscars for their turns in Taxi Driver. Bickle has proven to be a controversial character, particularly in the wake of the attempted assassination of President Ronald Reagan by John Hinckley Jr., allegedly influenced by the film. This film fully established De Niro as an acting legend; not everyone can turn the stage direction “Travis speaks to himself in the mirror” into the transcendent moment it became.

Django Unchained may have been the first that most audiences heard of this particular antihero, but the Django character has appeared in a total of 31 films and was first portrayed by Franco Nero (who gets a cameo in Django Unchained). Quentin Tarantino’s take can be considered a reimagining of the character, turning him from an ex-Union solider and Civil War veteran into a freed slave. A love letter to both spaghetti westerns and ‘blaxploitation’ flicks, Django Unchained toys with the conventions of both genres, its over-the-top moments balanced by Foxx’s intensity as the title character. The film attracted considerable controversy, especially for its liberal use of an offensive racial slur.  “Slavery almost becomes secondary, at a certain point,” Foxx said. “At the beginning, it’s a traditional slave movie.  And then, once he becomes a bounty hunter, that’s the backdrop.  Then it’s about revenge and getting his girl.” Django definitely is a character audiences wanted to see come out on top, and his journey from subjugation to gunslinging is a great example of the archetypical hero’s journey. Or “djourney”, if you will.

The first Pirates film is probably the purest example of an adventure flick in recent memory. Pirate movies had been dead in the water ever since the catastrophic box office sinking of Cutthroat Island, so the immense success the Pirates of the Caribbean franchise has had probably came as a surprise. Wily, eccentric, cunning and not entirely scrupulous, the Jack Sparrow character gave Johnny Depp a second wind as a marketable marquee name. Depp took inspiration from Rolling Stones guitarist Keith Richards, who had a cameo in the third and fourth films as – who else – Captain Jack’s dear old dad. Disney executives were originally confused and dissatisfied with Depp’s performance, but he insisted on sticking to the elaborate characterisation he had devised. He snagged a Best Actor Oscar nomination for his effort. Little did the bigwigs know that they’d chanced upon a goldmine, the Jack Sparrow character now internationally recognisable, and the movie pirate of this generation. It all came full circle with the Legend of Jack Sparrow attraction opening at Disney’s Hollywood Studios theme park – the film series based on a theme park attraction had spawned one of its own.

Luc Besson’s film gave us Gary Oldman in a particularly scary villainous turn and the auspicious, astounding debut of a young Natalie Portman, but most of all, it contributed its title character who has since found his way into the antihero pantheon. Jean Reno’s Léon was the archetypical hitman with a heart of gold, a deadly “cleaner” for hire whose marksmanship and combat skills belie a very soft centre. He’s got a potted plant for a best friend, winds down by watching black-and-white Gene Kelly films and subsists solely on milk, part of his portrayal as a strangely (but also endearingly) childlike and almost innocent assassin. Léon takes the precocious, Lolita-esque pre-teen Mathilda (Portman) under his wing, training her in the art of death. She in turn teaches him how to read, runs errands for him and tidies his apartment. The relationship between the two, equal parts sweet and unsettling, was expertly portrayed by both actors and helped give the film an emotional centre that separates it from the run-of-the-mill thriller set.

We cap off this list with another Luc Besson creation, the street junkie-turned accomplished assassin Nikita. Sentenced to life in prison after a violent robbery goes awry, Nikita is whisked away by a shadowy government agency who identifies that she may be of use and is groomed in both espionage and seduction. The character’s impact stretches far beyond the one film: Nikita was remade in 1993 as Point of No Return, with the lead character renamed Maggie and played by Bridget Fonda. The 1997 television series, La Femme Nikita, had Peta Wilson in the lead and changed the character’s origin, such that Nikita was innocent (thus not quite an antihero) and was set up by the organization that wished to recruit her, named Section One in this iteration. The incarnation of Nikita best-known to audiences today is the television series that premiered in 2010, starring Maggie Q as Nikita and with the agency renamed “Division”. The show has since developed a pretty dense mythology and Nikita is among the most kickass woman on TV today, continuing the legacy started with Besson’s original film.