Cloudy With a Chance of Meatballs 2

CLOUDY WITH A CHANCE OF MEATBALLS 2 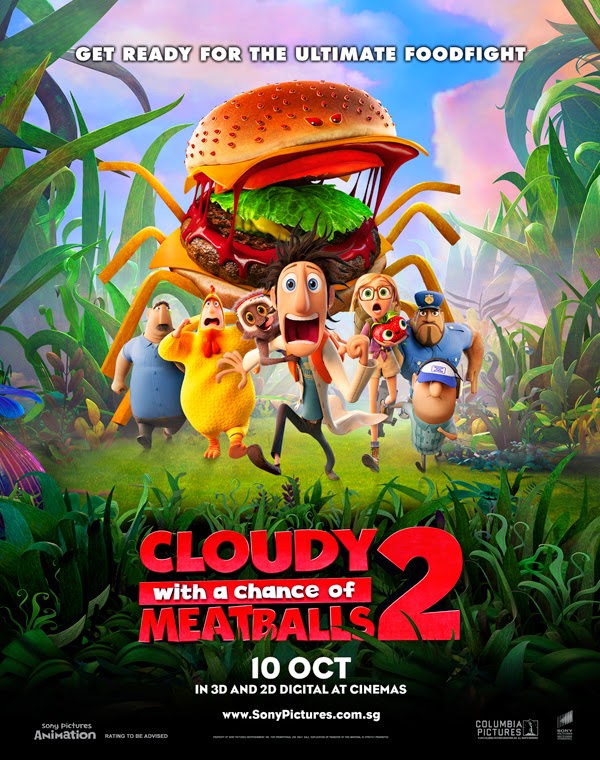 So sang the aptly-named Jimmy Buffett, who may have well been crooning about Cloudy with a Chance of Meatballs 2. The first film, released in 2009, was inspired by Ron and Judi Barrett’s classic children’s book, changing the premise from food whimsically raining from the sky to the delicious weather phenomenon being a side effect of a maverick scientist’s revolutionary invention.

In the sequel, we return to Swallow Falls, which has become a cheeseburger (among other food items) paradise, populated by a menagerie of “food animals”, all of which have punny names (think flamango, shrimpanzee, hippotatomus and tacodile – supreme!). The human residents of Swallow Falls have been relocated; iconic innovator and television presenter Chester V (Forte) of Live Corp stepping in to clean up. Flint Lockwood (Hader), responsible for the gastronomic precipitation in the first place, is thrilled as he has idolized Chester for years. Together with his pals – meteorologist Sam (Faris), his father Tim (Caan), man-child former bully Brent (Samberg), monkey sidekick Steve (Harris), neighbourhood cop Earl (Crews) and Sam’s cameraman Manny (Bratt), Flint ventures back to his now-transformed hometown. However, Chester V’s hidden intentions might pose some danger to the idealistic inventor, his friends and the food animals.

The best way to describe Cloudy with a Chance of Meatballs 2 is “cynicism-proof”. It’s one of those films that, even to the jaded movie critic likes of us, is irresistibly charming and smile-inducing. The first film was lovably goofy, an earnest, highly visual comedy that didn’t seem like the result of a series of audience surveys, pie (heh) charts and test screening statistics the way some animated films turn out. Sure, it was heavy on the gags and certainly geared towards a younger audience, but there was plenty of stuff for grown-ups and older kids to enjoy, including a heartwarming father-son story and the spoofing of disaster movie conventions.

This entry takes on the form of an adventure flick, taking place mostly on an edible Mysterious Island, if you will. There are a few neat little homages to Jurassic Park, including a spoof of the patented Spielbergian “looking in awe shot”, the ripples in the glass of water, and Sam’s Ellie Sattler-esque attire on the island. The designs for the food animals and food people (these apparently are more sentient and sapient) are imaginative and amusing, not to mention mostly very adorable. You’ll most likely have problems eating strawberries for a while yet thanks to anthropomorphic strawberry Barry (voiced by co-director Cody Cameron). And you’ll definitely not be roasting marshmallows any time soon, either. Most food-related films make one hungry; this makes one feel warm and fuzzy instead.

The voice cast, including Saturday Night Live alums Bill Hader, Andy Samberg and Will Forte, are audibly having a (meat)ball, delivering high-energy performances to match the lively, colourful animation. Veteran actor James Caan reprises the role of Flint’s old-fashioned, well-intentioned dad with a laconic warmth and gets a cute moment in which he sings the line “teaching pickles to fish, that’s my crazy world”. Of the returning characters, the only absent cast member is Mr. T, who is replaced by Terry Crews. Crews tries his best, but never quite matches his predecessor’s iconic voice.

The film does fall into formula on several occasions. For example, this certainly isn’t the first time we’ve seen the childhood hero of our protagonist become something of a fallen idol. In spite of this, Chester V, something of a cross between Steve Jobs and Deepak Chopra, does have an interesting look to him. The character also has incredibly expressive arms that bring to mind Terry Jones’ character in the “Find the Fish” segment of Monty Python’s The Meaning of Life (“I wonder where the fish did go?”). This being a kids’ film, plot points are often spelled out in block letters are there are chunks of exposition here and there, but things do keep moving enough to prevent this from becoming an issue.

Cloudy with a Chance of Meatballs 2 is a sequel that doesn’t dutifully dole out more of the same in a rote fashion, but takes the characters on an engaging adventure in a vibrant world populated with endearing critters. Furthermore, the watermelophants, wildabeets and the “just a tomato” are a whole bunch more likeable than the Smurfs and the Naughties from Sony Pictures Animation’s earlier effort this year.

Jedd Jong
Posted by Jedd the Jedi at 9:39 PM