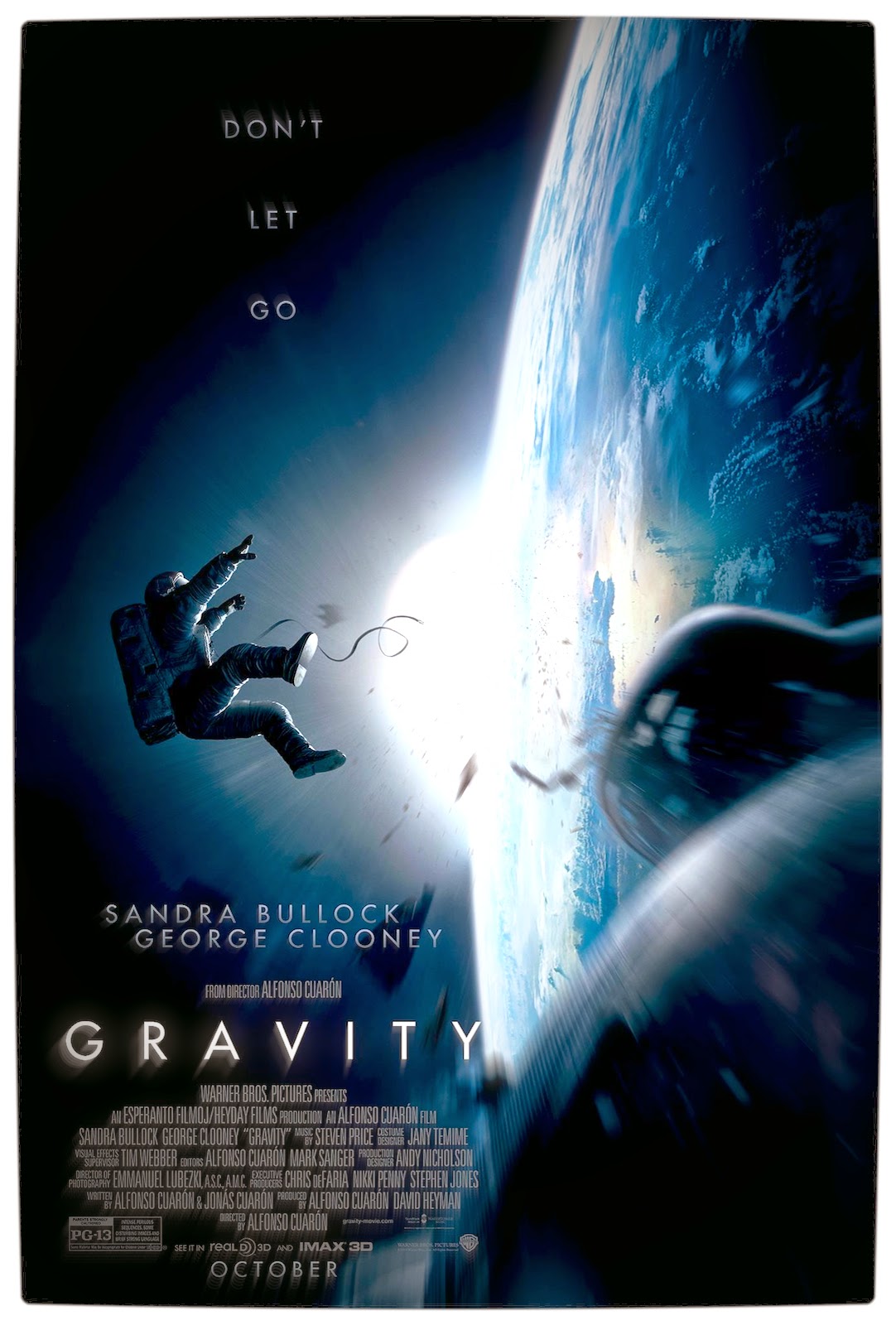 Have you ever been to a museum and watched an IMAX 3D documentary such as Space Station 3D or Hubble 3D and wondered “gee, what would happen if something went horribly wrong on one of these missions?” There’s no reason to feel guilty, since an environment as treacherous and as unfamiliar as outer space does lend itself to some rather macabre fascinations. This film is, very thankfully, probably the closest most of us will get to being first-hand witnesses to a catastrophe in orbit.

Medical engineer Dr. Ryan Stone (Bullock) is on her first space shuttle mission, STS-157, supervising the installation of technology that she has developed into the Hubble Space Telescope. The mission is commanded by seasoned astronaut Matt Kowalski (Clooney), who is on his last shuttle expedition. While on a spacewalk and working on the telescope, a wave of debris from a destroyed satellite hits the shuttle, leaving Stone and Kowalski stranded. With no way to contact mission control and with oxygen quickly running out of their spacesuits, the scientist and the astronaut must figure out a method of survival, floating in the vast, silent vacuum of space.

Gravity is very much a technical marvel. The film was four years in the making and is Alfonso Cuarón’s first directorial credit since 2006’s Children of Men. The film opens with a dazzling, 17 minute-long unbroken shot, cementing its place as a Best Visual Effects Oscar frontrunner within those few beginning minutes. Gravity seduces the audience with gorgeous, jaw-dropping vistas, before setting them on a thrill ride; this method making it comparable to Jurassic Park. It plays on simultaneous feelings of claustrophobia and agoraphobia; the characters almost trapped within their spacesuits while drifting through the expanse of outer space. We’ve often pointed out certain films that aren’t worth seeing in 3D; this definitely isn’t one of them. The stereoscopy contributes tremendously to that feeling of all-encompassing immersion. We’d also recommend seeing this on as big a screen as possible.

The term “visionary” is used a lot in movie marketing to describe directors – Cuarón once again proves that he is wholly worthy of the adjective. This was a labour of love for the Mexican helmer and the grandiloquent technical aptitude put on display is staggering. Credit must also go to multiple Oscar-nominated cinematographer and Cuarón’s oft-collaborator Emmanuel Lubezki, who makes use of the revolutionary Bot & Dolly IRIS motion-control camera rig to accomplish some breathtaking shots. Cuarón, who co-edited the film with Mark Sanger, has crafted a motion picture packed with suspense and peril without relying on frenetic hyper-editing or shaky cam.

While Gravity may be considered a film that “stars visual effects”, we do need to care for the human beings caught in the predicament, and that’s where Sandra Bullock and George Clooney come in. He’s the veteran and she’s the rookie; Clooney playing Kowalski as a charming, cool-headed consummate professional. He coaches and coaxes Stone along, gently guiding her through a very alarming, sudden situation. He regales mission control with funny stories and describes himself as just “the bus driver”. He has to put Stone at ease and, by extension, the audience too.

This is very much Sandra Bullock’s movie to carry though, and talk is already swirling of a Best Actress Oscar nomination for her turn as the mission specialist. The character is a fantastic female protagonist; we don’t get a whole lot of those in science fiction and shades of the Alien franchise’s Ellen Ripley are indeed evident. Bullock gives the part her all, though this reviewer couldn’t help but wonder if any of the actresses considered before she got the part (Angelina Jolie, Natalie Portman, Scarlett Johansson and Marion Cotillard among them) might have been a better fit. In addition to traipsing across space station exteriors, Dr. Ryan Stone has vulnerable moments where it seems she’s given up all hope, and while Bullock appears to struggle with portraying that raw, desperate emotion, her performance is still very commendable. Sci-fi is often seen as clinical, but Dr. Ryan Stone’s quest to simply find her way home is told with a deft, personal touch, even as it unfolds against the majestic, high production value backdrop.

“Atmospheric” is a pretty apt way to describe Gravity, even though it takes place outside of our atmosphere. The film is a masterful exercise in contrasts, with calm, peaceful moments juxtaposed against white-knuckle ones and silence immediately following frantic sections of Steven Price’s score. Even though it’s high-gloss, the film doesn’t feel artificial or inauthentic and is without that pesky “phony green screen” feel these pictures sometimes have. There aren’t any mind-bending plot complexities, but Alfonso Cuarón and his son Jonás’ screenplay forms the ideal blueprint for a lean (at just 90 minutes), well-paced and visually sumptuous journey.

SUMMARY: Alfonso Cuarón delivers a science fiction thriller that is at once sweeping and intimate and showcases the catalogue of filmmaking skills the director possesses, in addition to good performances from its cast of two.

Jedd Jong
Posted by Jedd the Jedi at 9:44 PM