AN OLD STORY MADE NEW: 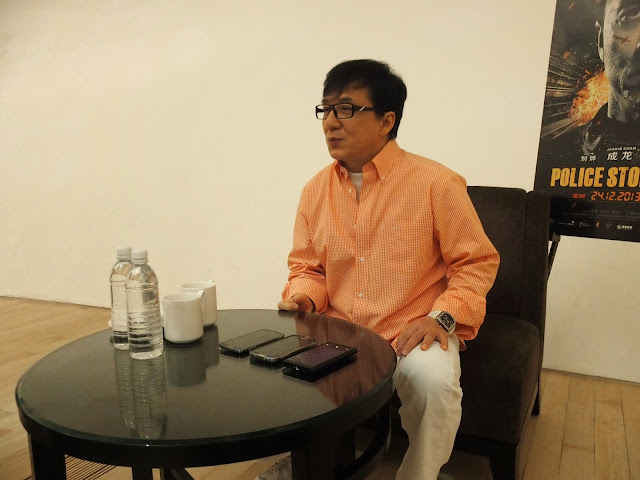 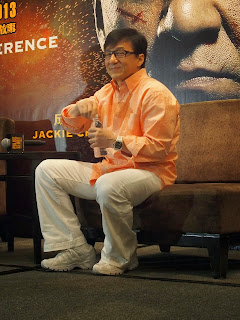 On Tuesday, F*** was at the ArtScience Museum in Marina Bay Sands Singapore where renowned action star Jackie Chan spoke to the press about his latest film, Police Story 2013. Maybe we shouldn’t be calling him an “action star” though – “I really want to prove to audiences that I’m an actor, not an ‘action star’. I’m an actor who can fight, not a fighter who can act, because if you fall into the latter category it’s hard to have a long career,” he said empathically. Jackie has had a long and illustrious career indeed, and he assured us that there’s more to come yet.

“If I didn’t make movies, I’d have no idea what to do with my life! I live for movies,” he declared. “When I was making CZ12, I had a feeling it would be popular with audiences because it’s an action-comedy for all ages, but I don’t feel I can be making only action comedies forever,” Jackie shared. “So this year, you’ll get to see another side of Jackie Chan, and next year there’ll be a different film and I’ll continue to metamorphosise.” Police Story 2013 has been touted as a dark, gritty thriller and is definitely a departure from the lighthearted fare audiences are used to seeing from the actor.

Jackie made it clear that he’s not content to rest on his laurels. “I don’t think I can keep making films of the same variety over and over again, I’d get bored with it as an actor,” he said. “Honestly, I’m not making films for the money now, it’s because I’m interested in making them. I like a good challenge and I like showing the audience that I really am an actor…to me, in my career as an actor, it’s something new for audiences to experience.” He did note that Police Story 2013 isn’t quite as dark as 2009’s Shinjuku Incident. When asked what made him take a different route with this film, Jackie said “I think that my personality has started to change. I feel that I’ve matured a lot physically and mentally.”

In keeping with his desire for audiences to take him seriously as an actor, Jackie said he wants to inch away from films that are wall-to-wall action extravaganzas. “This film focuses on relationships, family, what motivates us in our lives, I think it’s something refreshing,” he said. “The old films were fight after fight after fight, jump after jump, I like this film because I feel that I’ve gravitated towards drama as I’ve grown older.” There are still fisticuffs and explosions to be had in Police Story 2013, and Jackie assured us that he still performed all of the fight sequences himself. 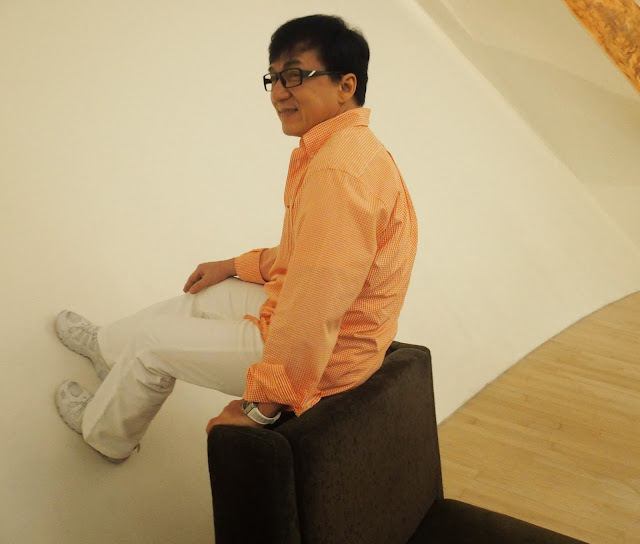 He did also express a genuine concern that he’d become wheelchair-bound and be unable to continue acting. “Every time I make a new movie I have a fear of getting seriously injured,” he said. An accident he experienced on the set of CZ12 was a sobering incident, and Jackie said “I hope that luck is with me each time; if there’s one moment of bad luck, I’d be finished. So as a responsibility to my family, to my fans and to myself, I told myself that I really have to be more careful. So with this in mind, I’ve approached everything with a lot more care. In the past, I had no regard for it – I’d climb up everything! Now, I need it to get checked out to see if it’s safe. So now there’s a lot more preparation and I’ve gotten a lot more careful because it’s so easy to get seriously injured and then it’s so difficult to get better.” 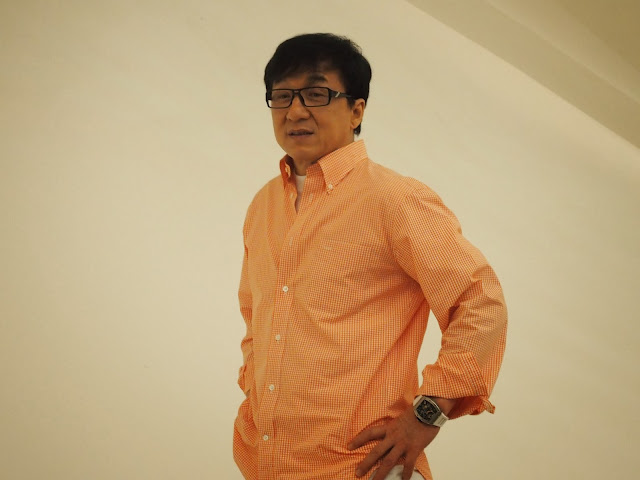 In addition to concerns about his physical well-being, Jackie revealed the emotional connection he had to the film. “the character of Zhong Wen has a family, he has a daughter. Because of his commitment to police work, he’s neglected his family and on top of that, his wife has died. Perhaps it’s because I’m getting on in years that I prefer working on projects that are more emotional.” Jackie is able to relate to the character: “I think it’s very much like my real life. I admit that I have neglected my wife and son in my commitment to my job. It’s really hard to get the best of both worlds, to be working on movies and to spend all day with my wife, to be there to take my son to and from school at the same time. When I had that monologue in the film I started to cry because it did hit very close to home.” 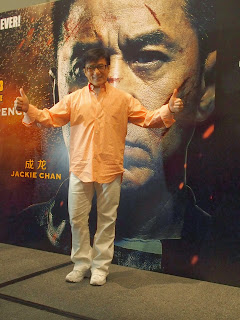 He also opened up a little about his relationship with his son Jaycee. “The path that I take and the path that he takes are totally different, they really are. I can’t influence him because he’s very adamant about not making action movies. He much preferred playing basketball to practising martial arts as a kid. When he got older, he told me ‘Dad, don’t force me into it; I’ll never be the same as you are.’ He wanted to get into music and had set his mind on it.” Understandably, Jaycee wanted to step out of Jackie’s shadow. “He didn’t want to be like Brandon Lee, who was constantly being compared to his father (Bruce Lee). He told me that he’d never be better than I am at making action movies but that I’d never be better than him at making music. So, he’s always had a resistance to making action films. I thought the romantic film he did was pretty good. And, it’s very clever of him, because you don’t get tired making those kinds of movies, but trust me on this: you get really, really worn out making action films!” Jackie realises that his speciality is making tactile action films with stunts done for real and not assisted by visual effects. “I trust that audiences like seeing ‘real Jackie Chan action’, real action movies. I feel that these days, the international market has become jaded and bored of wire-fu and action that relies a lot on visual effects.” When it comes to competing with Hollywood, Jackie said “honestly speaking, Asian films that are visual effects-driven and rely on the filmmaking technology cannot compete with Hollywood’s output. So, if we make tactile, traditional action films, we can have the upper hand in that area.”

Jackie was invited onto the set of Avatar by director James Cameron, and he described it as a bewildering experience. “He’d say a whole chunk of English and I’d nod and go ‘mm, yes, yes.’ He’d say ‘of course you’re the expert and you know how all of this works’. When I left the set, I had no idea how any of it worked and I couldn’t understand what they were doing! It’s the truth! The whole set was empty and there were lots of technicians in their 20s and 30s around the set with handheld computers. When I went in, everyone started bowing and greeting me, like I was some kind of master of the movies. James Cameron handed me this tablet, and it showed the set completely populated with people, when the set itself was bare!” He decided to continue making movies the way he does them best – relying on the basics. “The way I do things, it’s really easy to understand: there’s a board and you jump off it. If it’s not right, you adjust the board.” 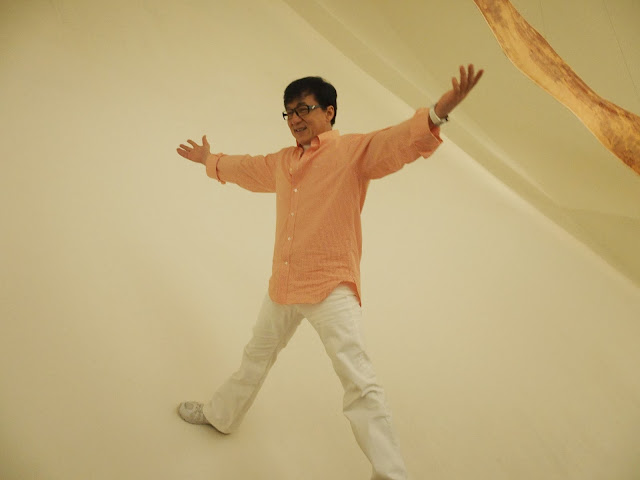 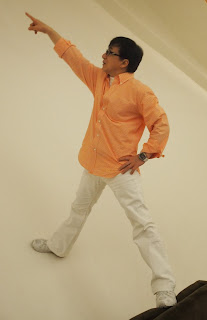 Jackie has a lot in the works for the future: in addition to continuing to make movies, he’s got his training academy, a movie theatre coffee shop business, the Jackie Chan gallery opening in April 2014 in Shanghai, a wine venture, fashion and accessory lines, the Jackie Chan World theme park and an awards ceremony to recognise action films. Feeling that action movies get sidelined at most award ceremonies, he said “the other day, I was in Macau at the Huading awards and who took the award for ‘best global action movie actor’? The guy from Avatar (Sam Worthington). He walked down and when he saw me he said ‘I’m so ashamed!’ I even applauded for him, I think it’s no big deal. I don’t need an award to prove I’m the best. When he took the prize, he felt really embarrassed – it’s not his fault! The judging panels at a lot of these awards ceremonies can’t discern between effects-driven action films and realistic action films. They don’t give action movies the time of day…do you know how much action movies have done for Chinese movies as a whole? I’ve seen a lot of these people get forgotten.” 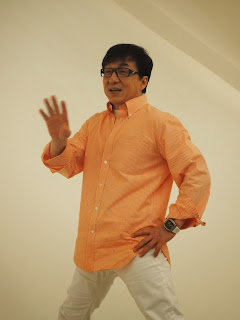 Jackie then gave us a status update on the films he’s working on in Hollywood. Apparently, Skiptrace – his buddy cop film that won’t be part of the Rush Hour series – has been delayed. “I know that if we begin shooting now in Siberia, it’ll be so cold…when I get on the set, everyone’s mind will only be on finishing up and getting it over and done with. So I’m putting Skiptrace on hold. I will start concentrating on some scripts I have in development. The historical film in April, and then Skiptrace will start back up in August or September.” Jackie also confirmed he will not be involved in The Expendables 3 and gave his reasons for turning down the offer. “First off, it’s a big cast. Stallone told me ‘you can do whatever you like’ but that’s not possible; everyone in the cast is a big name and there won’t be any room for me to be in it.” He recounted a “ terrible experience” he shared with Stallone, appearing in what is regarded as one of the worst films of all time. “I shot a cameo for An Alan Smithee Film: Burn Hollywood Burn with Stallone, I shot one scene. The promotional materials declared that it was ‘starring Jackie Chan and Stallone!’ and that became a lie because I was in it for two minutes. So the same thing would happen when The Expendables 3 gets promoted in Asia, it’ll be ‘starring Jackie Chan and Stallone!’” Don’t rule out seeing the Italian Stallion and the Asian Hawk togther, though. “I asked him if I could make a movie just starring the two of us and he agreed with what I said, so that’s why I’m not a part of The Expendables 3,” Jackie concluded. He is also considering shooting a sequel to The Karate Kid.

Next year marks Jackie Chan’s 60th birthday, and he is planning a grand “charity peace” concert uniting artistes from across Asia. "I’m going to get singers from Japan, Korea, the Philippines, Malaysia, Cambodia, Singapore…all across the region together for that night, it’s something that I’ve been planning for a long time and it’s just so that it coincides with my 60th birthday.”

Jackie Chan finished with glowing praise for Singapore as a country.” I really like the cleanliness in Singapore, the fresh air, the discipline and the greenery. I’m always cursing and swearing when I describe how beautiful Singapore is! You guys are really so lucky and you have to maintain it…also, the urban layout is done very well, the positioning of skyscrapers and other buildings. I don’t have plans to make movies in Singapore now, but if I do, you’ll be the first to know!” He ended off the round table session in true Jackie Chan style, posing for pictures balancing between the museum wall and a couch.