When we were taught about the evils of drugs in school and all the horrible things narcotics can do to a person’s body, what didn’t receive as much attention in the classroom were the scary, scary people who manufacture and deal said narcotics. The recently-concluded television series Breaking Bad chronicled Walter White’s journey from regular high-school chemistry teacher to treacherous “cook”. In Homefront, Jason Statham comes face to face with some “cooks” of a slightly different variety.

Statham plays Phil Broker, an undercover DEA agent who gets embedded in a biker gang and orchestrates a violent drug bust, resulting in him becoming none too popular and having to lay low. Broker and his daughter Maddy (Vidovic) relocate to the sleepy town of Rayville, Louisiana. Maddy fights back when she’s bullied on the playground, riling the bully’s mother Cassie Bodine (Bosworth). This draws attention to mysterious new neighbour Broker, which isn’t good news as Cassie’s brother Gator (Franco) is a notorious meth kingpin who operates a meth lab with his girlfriend Sheryl (Ryder). Broker must act when the life he tried to escape returns to threaten him – and his daughter.

Homefront is directed by Gary Fleder, from a screenplay by Sylvester Stallone, based on Vietnam vet author Chuck Logan’s novel. The script, which Stallone had written with the intent of playing the lead in mind, sat on a shelf for a while until he selected Statham to replace him in front of the camera. It’s easy to forget that Stallone was nominated for an Oscar for writing Rocky, so he does have typewriter cred. The script is serviceable, not remarkable by any means, and the more tender moments between Broker and his daughter do come off feeling a little forced.

Cinematographer Theo van de Sande offers up some pretty images of Broker and Maddy on horseback and helps juxtapose the beauty of the idyllic bayou with the nastiness of the backwoods denizens who call it home. Throughout most of the film, Statham shows off his hand-to-hand combat skills and, while quick-cutting and shaky cam is employed during the fights, it isn’t overused to the point of nausea. The film’s conclusion is that of a generic action movie, replete with a car chase, shootouts and pyrotechnics, but it is decently-staged.

Statham has become known as an actor who pretty much plays the same guy in all of his films. While Homefront won’t be the movie he will be remembered for, it gives him a chance to do something a wee bit different – just not too different. Here, he’s more Papa Wolf than vengeful badass and it brings to mind Snitch from earlier this year, in which Dwayne Johnson tried something similar. Mostly though, Phil Broker is the standard-issue Statham tough guy. You might be thinking “What’s a Brit doing in the Bayou?” Fleder said of the decision to have Statham speak as he normally does, “I love the idea of (keeping) Jason's natural British accent because it made him more of an outsider. It made him more threatening as an exotic presence in this town." The tactic is pretty effective. Vidovic doesn’t quite stand out from the many other child actors who have played similar roles in action flicks, but she’s okay. 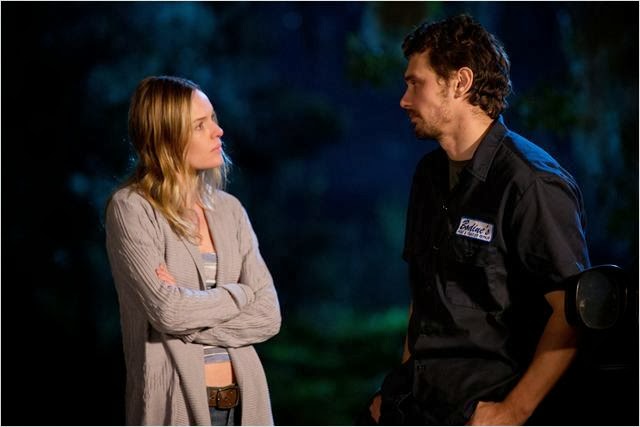 Franco has proven himself as an interesting actor, having dabbled in everything from writing to directing to creating art to giving guest lectures in addition to acting. He’s also proven he can play an entertaining psychopath and does make for an adequate villain here. He doesn’t go all out with the scenery-chewing and isn’t as terrifying as he could’ve been, but he’s good. Ryder plays against type, more white-trash chick than elegant goth girl, and Kate Bosworth looks threadbare as a redneck mama constantly on edge. Thing is, everyone’s teeth look way too good, given that the characters are meth users.

Homefront isn’t anything we haven’t seen before but it is sufficiently different from Statham’s regular “action flick of the week” output and we get to see him as both protective dad and kicker of ass. Is screenwriter Stallone’s Expendables co-star better in the role than the Italian Stallion himself would have been? It’s hard to say but it’s a casting choice that isn’t a horrible misfire.

SUMMARY: Homefront is conventional but sturdy and Jason Statham is a Papa Wolf any daughter would want beating up the drug dealers to protect her.

Jedd Jong
Posted by Jedd the Jedi at 5:07 AM