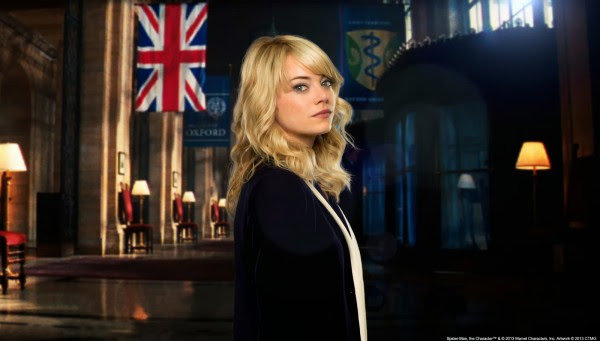 The effervescent, energetic Emma Stone, both feisty and sweet, is certainly a hit with moviegoers, her breakout roles in Zombieland, Superbad and Easy A ensuring she would become an A-lister in no time. Her on and off-screen romance with Andrew Garfield has also captured the imagination of many fans, and that the pair have never been trashy tabloid targets probably adds to their appeal as a couple.

Sipping on an iced coffee, Stone spoke to F*** about Gwen Stacy’s pivotal role in this instalment and the trials in her relationship with Peter, what it was like working with Shailene Woodley (who was ultimately cut from the film) and how she’s not chomping at the bit to jump into an action-driven role.

Do we get to see Gwen think her way out of situations like that scene where she’s stalked by the Lizard in the first film?

Yes, very much. She definitely makes her opinion known and gets herself very involved in what is happening.

Are there similarities between Gwen and the real Emma Stone?

I would say so, yeah, I think there have to be in some ways, to find a window into the character you have to find parts of yourself that are like them. I would say there are quite a few similarities, but I don’t have her mind for science. (Referring to a reporter who surprised her with a biochemistry question at the press conference the previous night) Rude! That’s what Google is for, amen. We have some similarities but I would say she’s a little more logical than I am, I’m a very emotional person and she doesn’t let emotion rule her as much. But that’s why she’s a scientist and I’m an actor!

Does being an emotional person help you in your acting?

I think being too emotional in life can sometimes be a hindrance for me but I would not trade it, ever, I would never trade the stuff I feel from being a sensitive person, but it can be hard when you’re sensitive sometimes. But it’s alright, I’m happy that I’ve gotten to find a job that works that is a productive outlet. It’s great, it’s a gift.

It seems like Gwen is more emotional in this film than in the last, we see her leaving Peter.

Yeah, I think it is hard for her, to be making a decision to leave that relationship behind, obviously it’s not working and the timing is all wrong. I relate to those emotional aspects of Gwen but again, she’s got a mind for science. She’s a bit more Type-A.

When you were first picked to play Gwen, did you feel any pressure from the character not being as well-known as Mary Jane?

Well that actually alleviated the pressure because I wasn’t playing Mary Jane, so it didn’t feel like people had a pre-conceived version of the story. I think for Andrew, Tobey (Maguire) had just played the character and for me, Kirsten (Dunst) played a different character. Bryce Dallas Howard played Gwen Stacy in the third movie, but it wasn’t really Gwen’s arc as it is in the comic book and we knew we were telling a different story, so I was lucky, it took the pressure off.

This is your first sequel. What was it like making a sequel to a big blockbuster?

I like it more than the first part, actually. We all were really on the same page, we all knew what story we were going to tell and I think there was less “how are we going to do this from scratch? How are we going to re-tell the story?” We had told it, and now we were going to explore all the different avenues of these characters and these new villains and Gwen’s story, which is a hugely important story to Spider-Man history, so there was a different feeling on set. We were all kind of really happy and looking forward to being that every day. We knew what we were telling.

There’s a lot that happens to Gwen?

Some stuff happens. Yeah, some things occur, she’s going through a lot and it’s a big, important part of the story.

Shailene Woodley was cut from the film, but can you talk about what it was like working with her on the set? Was a strong MJ-Gwen rivalry being set up?

No, there wasn’t a rivalry being set up. We actually had a really beautiful scene that I’m so sad is not going to be in the movie. There was a scene where MJ and Gwen had a really beautiful moment where they were talking on the porch. I love Shailene so much! She is one of my favourite people. She’s…I’m just…she’s so herself, and I’m so grateful I got to meet her and I cannot wait to do something with her. I really wanna do a Thelma and Louise with Shailene! 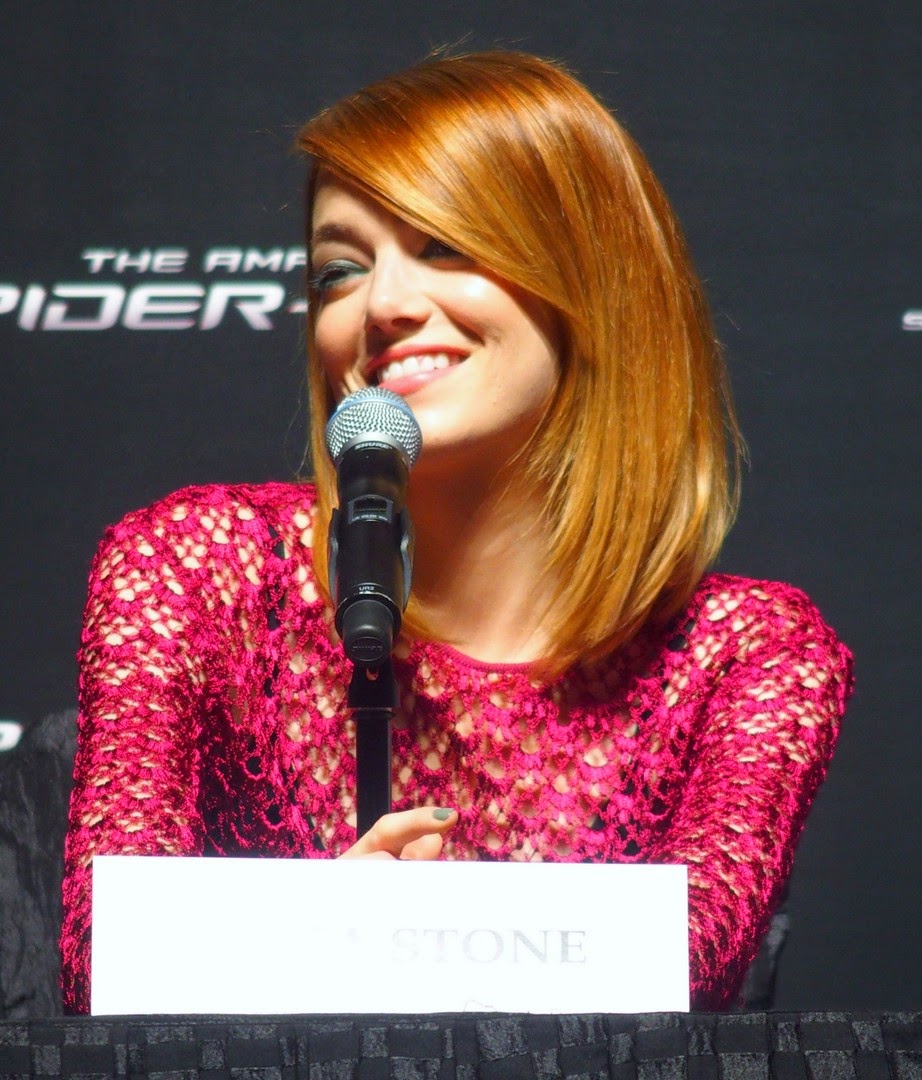 Are you looking forward to taking on more action-oriented roles?

No, I mean if there’s like a yoga character…I don’t think you necessarily have to be physically strong to be a strong female. I think being mentally strong and emotionally strong is really important too. A lot of people ask me if I want to play a female superhero, if I was jealous of the guys doing all the stunts and no, I wasn’t! I wasn’t ever into…

That was awesome, I had a pump shotgun, that was cool! And I had a great time, but I ran in that movie and on day two I fell and sprained the whole thing and a stunt double had to (take over)…I’m just not physically capable. But I like to dance, I like things like that. I have a different way of exhibiting strength. But I definitely feel like a strong person, maybe not physically the strongest.

You’ve starred in romantic comedies like Easy A and Crazy, Stupid, Love. and have taken on roles in action films like Gangster Squad and the Spider-Man films. What was the transition like?

I don’t know, it doesn’t really matter what the genre is. I think I’m excited for more challenges, there’s lots of things I’m interested in doing that I haven’t really gotten to explore yet even though I’ve been able to play characters in lots of different genres from the outside, there’s lots of things internally in characters that I like to play that I don’t think I’ve really gotten to explore yet so I’m kind of…I feel that’s sort of a turning point in my life, and I think lots of things will happen that will inform my future and I’m excited to try lots of different things no matter what the genre is, I think characters are what I’m really interested in right now and I’d like to play something truly bizarre (laughs).

Do we get to see more of Gwen and her siblings and the impact that Captain Stacy’s death in the first film has on Gwen’s brothers?

Felicity Jones’ role has not been revealed yet, but could her character complicate things between Gwen and Peter?

No. I don’t think so, I think Gwen and Peter’s destiny is pretty clean-cut.

Did the cast bring anything surprising to the process on the set, and did it energise you?

Absolutely, well Jamie, working with Jamie and Dane DeHaan he’s so…fantastic actor. It’s very energising to have new people in the experience and Jamie obviously while was there, because you’ve seen all of these people for such a long time and then to have this new energy is really invigorating. To work with the same people again…I’ve gotten to work with Ryan Gosling twice, I’ve gotten to work with Ruben Fleischer the director of Zombieland again on Gangster Squad, I’ve been able now for the first time to start working with people again and it’s always different, it’s interesting, not better or worse just different, being in a different story, telling a different…it’s cool, it’s interesting.

When it comes to playing different characters, would you like to try playing a character who’s ugly, because you look so good all the time?

Ugly? I don’t that would be that difficult (laughs). I played Skeeter in The Help.

Would you mind undergoing a physical transformation of gaining or losing a lot weight to play a character?

Not really, I mean I wouldn’t really like to lose a ton of weight, I don’t really…I don’t think I need to lose any more weight…

But Skeeter was cute!

Skeeter…ugh (laughs) I don’t think I need to lose any more weight. So no, I would of course be open to doing things for a character but I wouldn’t really want to endanger my health. Some people are willing to really go the distance to endanger their health long-term but it’s not worth it to me to play a part and then mess with the rest of your life so if it were safe, yes, I would do that but starvation does not sound all that safe.

Three adjectives have been used to describe Gwen: smart, loyal and ambitious. If you could just one to describe yourself, which would it be?

Smart, loyal and ambitious…oh god, I have to choose one of those? I wouldn’t want to trade any of them for another one…I would hope loyal. But not to a fault, not to people who don’t deserve it.

You’ve worked and will be working on many different types of movies. What do you think of critics in general not having a very high opinion of blockbusters? Blockbusters aren’t really nominated for Oscars.

Well, Heath Ledger won an Oscar for Dark Knight. I mean I think that there are nominations…I would go with you on comedy too, I always wonder why people aren’t nominated for comedies in the same way. But they sometimes are, and there are certain movies that are nominated for awards…I don’t know, I’ve never really been all that concerned with all this awards stuff, I just did it because it’s what I love so it had never really entered the equation for me. Certain movies tend to appeal more to an awards audience and are marketed towards an awards audience and I don’t know if these movies necessarily are campaigning to be “awards movies” or summer-oriented, so maybe that’s why.

Hire Petra Flannery as your stylist, and you can too! (Laughs)