“Survival at sea” movies seem to be making a comeback: over the last two years, we’ve seen Life of Pi and All is Lost, with Unbroken due later this year. Darren Aronofsky delivers his take on what might be the original survival at sea story with Noah. It has been ten generations since the creation of Adam and Eve, and Noah (Crowe) receives visions from God foretelling a great flood that will annihilate humankind, who has become wicked and violent. Noah is tasked with building an ark to shelter one male and one female of every animal during the flood. His wife Naameh (Connelly), sons Shem (Booth), Ham (Lerman) and Japheth (Carroll) and Shem’s wife Ila (Watson) help Noah with his divine mission, but they also witness the torment brewing within Noah. The vicious self-proclaimed king Tubal-Cain (Winstone) refuses to acknowledge the prophecy of the flood and leads his men against Noah. The fallen angels encased in rock known as the Watchers, led by Samyaza (Nolte), protect Noah and his family against the hordes as the waters erupt from the ground and fall from the heavens.

Most book-to-film adaptations are of full-length novels, and the first step in such adaptations is often trimming the material down to size and condensing it. The story of Noah is found in Chapters 6-9 of the book of Genesis in the Bible: it’s a short story that’s told matter-of-factly and this adaptation involves a good deal of expansion. Aronofsky set about making a film that would defy expectations associated with a Biblical movie, while staying true to the letter of the text – something definitely easier said than done. This is a filmmaker whose works include the provocative, disturbing likes of Requiem for a Dream and Black Swan and whose most technically ambitious film was the trippy The Fountain, so there’s no way he was going to play by established rules. Paramount got cold feet when test screenings last year generated controversy, but Aronofsky fought hard for the preservation of his cut of the film. The Noah audiences are getting stays true to Aronofsky’s vision, but it is easy to see why the studio panicked, and the multiple fades to black seem to indicate there’s still some re-editing that happened.

We don’t go to the movies to be preached to and Noah definitely isn’t a woefully laughable production the way Kirk Cameron’s Left Behind movies were. Aronofsky and co-writers Ari Handel and John Logan train the story’s focus on the humanity of the characters. The internal conflict that arises within Noah’s family and the external conflict provided by Tubal-Cain’s onslaught drive the narrative. All the players have their flaws, and oftentimes said flaws get magnified. The Bible is not a pretty book; many of the stories within are raw and hard to stomach. Aronofsky wanted to flesh out the darkness supposedly inherent in the story of Noah and the great flood, so the handling of the Watchers is particularly curious. In this film, they are fallen angels cursed to be imprisoned in stone, so they end up as rock creatures particularly reminiscent of Ray Harryhausen-style stop-motion movie monsters. In the Bible however, the Watchers lusted after human women, co-habiting with them and spawning the monstrous Nephilim; God bringing about the flood to wipe these giants from the earth. That Noah does not pursue this inherently juicy and fantastical story thread is puzzling.

There’s a lot of angst in this film, an understandable storytelling choice as angst breeds drama. Russell Crowe’s Noah is stoic but burdened with his divinely-appointed task, and as interpreted here, is intent that human beings not get a second chance. Russell Crowe certainly does “tough” and “angry” well; while this is a good performance, it’s not anything very new for him. Jennifer Connelly, who was also Crowe’s on-screen wife in A Beautiful Mind, is a dependable voice of reason as Naameh, who tries to reassure Noah that he loves his children and therefore cannot hate all of mankind.

Ila’s deal is that she is she is barren from a childhood injury and feels inadequate that she will not be able to provide Shem with children. Emma Watson attempts to give Ila a personality of her own, but it does seem like she’s defined by her role within the family. Logan Lerman’s Ham is the rebellious middle child, in danger of being swayed by the aggression and power Ray Winstone’s Tubal-Cain embodies. Winstone is as imposing and grizzled as he usually is and does make for a believable opponent to Noah, though he often falls into the position of “designated antagonist”. The slightest hint of levity in the film is provided by Anthony Hopkins’ Methuselah, Noah’s grandfather and a Yoda-type sage and mentor who misses the taste of berries.

Ideally, a film of this genre melds spectacle and intimate story-telling. It would seem that Noah accomplishes both, what with location filming in Iceland and on a purpose-built ark set at New York’s Planting Fields Arboretum, in addition to boasting the most complicated rendering in visual effects house ILM’s history. However, it sometimes feels like Aronofsky was reluctant to present a visual epic; that he was so intent on depicting a tense family drama that scenes like the masses of birds flocking into the ark were only included out of obligation. There is a time-lapse-heavy montage telling the creation story and illustrating man’s propensity towards conflict with several inventive touches. Perhaps it’s to do with the tonal approach: there’s a difference between “solemn” and “dreary” and most of the time, Noah leans towards the latter, resulting in a lack of sweeping majesty. 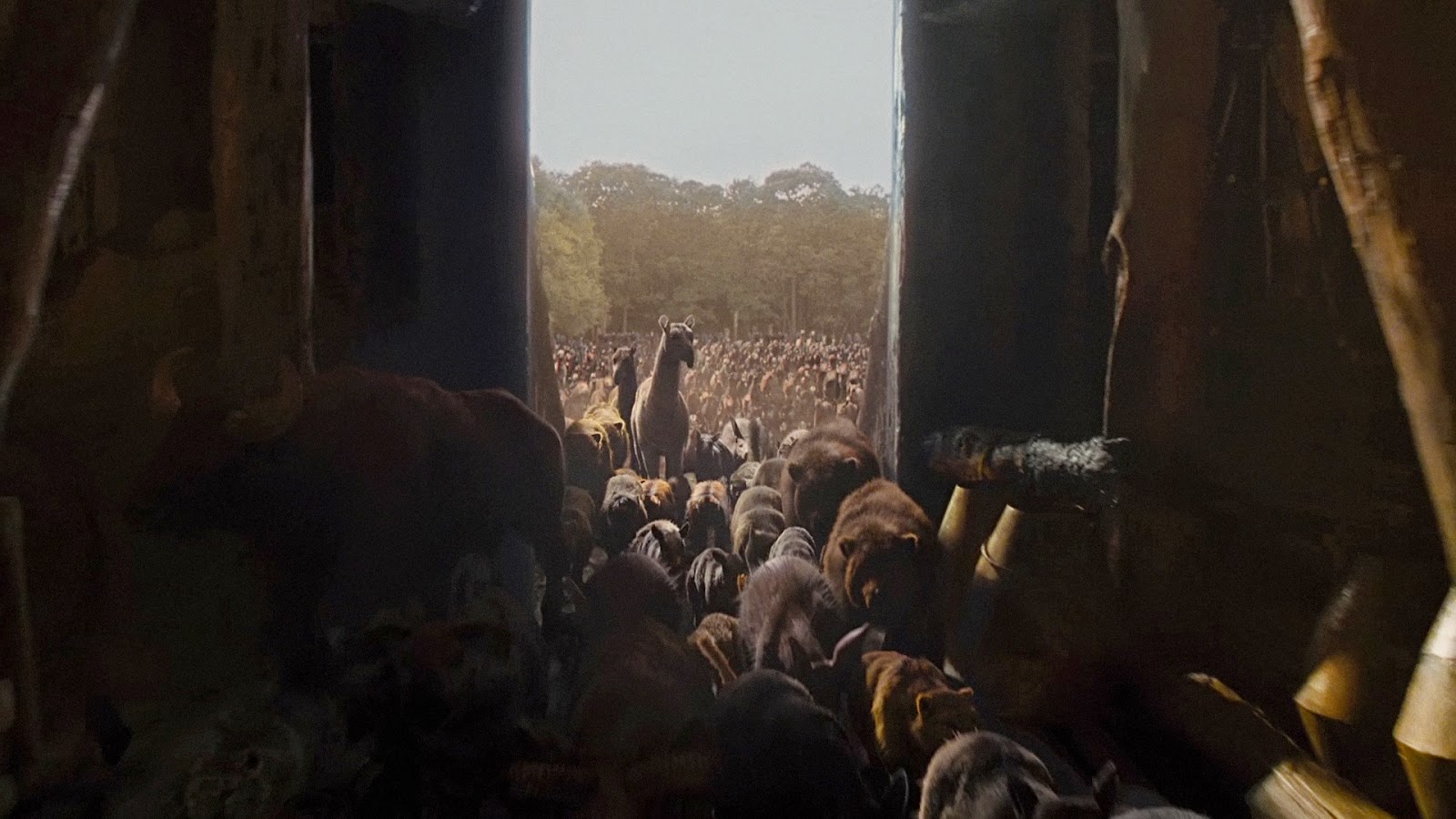 Darren Aronofsky wanted Noah to be “different”, and that it is. Filmgoers should appreciate the fact that a director as talented and as unique as Aronofsky was given around $130 million to tackle a story like Noah, rendering a well-worn story new again. It’s not necessarily going to sit well with the personal beliefs of every viewer out there but then again, that’s part of what sets this apart from the crop of Bible flicks – though it is at the expense of staying true to the source material. While the end result is far from watertight, it is interesting, it is sufficiently thought-provoking and taking a good deal of artistic license, the film explores the text as much as it challenges it.

SUMMARY: Far from the cuddly pleasure cruise drawn in so many children’s picture Bibles, Noah is complex, uneven, patchy but uniquely engrossing nonetheless.