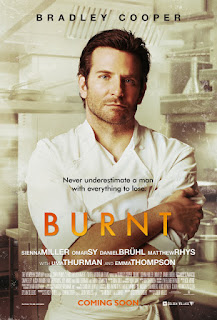 Can you smell what the Rock(et Raccoon) is cooking? Raccoons are known for foraging for food in the trash, but this drama takes place in the rarefied realm of haute cuisine. Bradley Cooper plays Adam Jones, a former rising star in the Paris culinary scene who crashed and burned due to his self-destructive tendencies. Now clean and sober, Adam is hoping to make a fresh start and earn his third Michelin star with a new restaurant in London. He coerces maître d’ and hotel heir Tony (Brühl) to help him manage the front of house, with his old colleague Michel (Sy) as his sous chef. Adam takes a shine to single mother Helene (Miller), whose talents he feels are not put to proper use. The opening of the Adam Jones at the Langham earns the ire of Adam’s fierce rival Montgomery Reece (Rhys), and Adam has to keep his demons at bay as he strives for that coveted third star. Matters are further complicated by drug dealers to whom Adam still owes a great debt, as well as the presence of his former flame Anne Marie (Vikander), the daughter of Adam’s late mentor Jean-Luc. 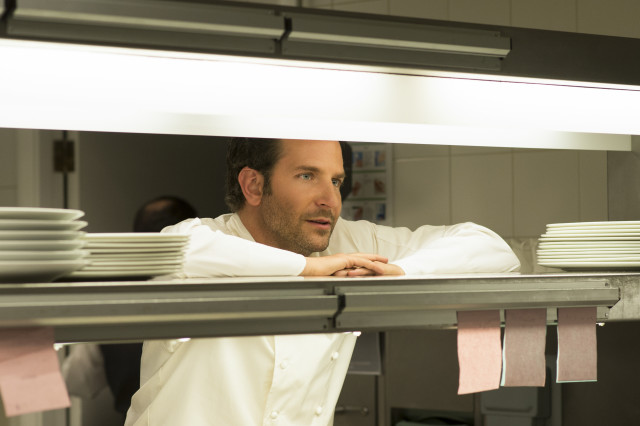 The title ‘Burnt’ conjured up images in this reviewer’s head of an alternate-universe Disney animated film starring a pyrokinetic princess named Elsa. Burnt was earlier named ‘Adam Jones’ and before that ‘Chef’, but that title was taken by Jon Favreau’s 2014 film. Since Chef was the last major narrative feature centred on making it in the kitchens of restaurants, Burnt does invite comparisons with it. Sure, Chef was more than a little self-indulgent, but it did have warmth, soul and earnestness and was clearly a passion project of Favreau’s. Directed by John Wells, Burnt is cynical and formulaic, a rock star redemption tale set in the high-stakes world of choleric chefs smashing plates on the floor and yelling at their underlings. Adam Jones is established as being obnoxious and obsessed, and the underlying message seems to be that if you’re good at something, it doesn’t matter how awfully you treat everyone around you. 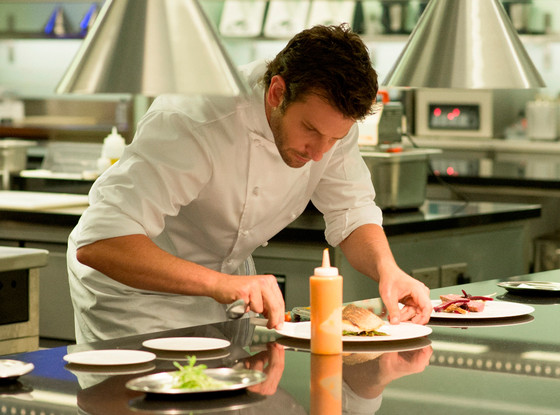 Steven Knight’s screenplay packs in the contrivances and somewhat clumsily attempts to explain kitchen lingo to the layman. There is a joke in which a plastic sous vide pouch is derisively called a “fish condom”, and this joke is apparently funny enough to repeat. This is a slick, well-paced film which paints a tantalising picture of a glamorous world while also emphasising how challenging it is to become a star in said world. Cinematographer Adriano Goldman’s camera glides from one cook’s station to the next, capturing both the frenzied activity and the aesthetically-plated dishes that leave the kitchen. Michelin Guide reviewers are presented as secret agents and everyone is struck by awed panic when they think these critics have arrived. The food, plated by food stylist Nicole Herft, looks very tempting indeed, with celebrity chefs Marcus Wareing and Mario Batali serving as consultants. 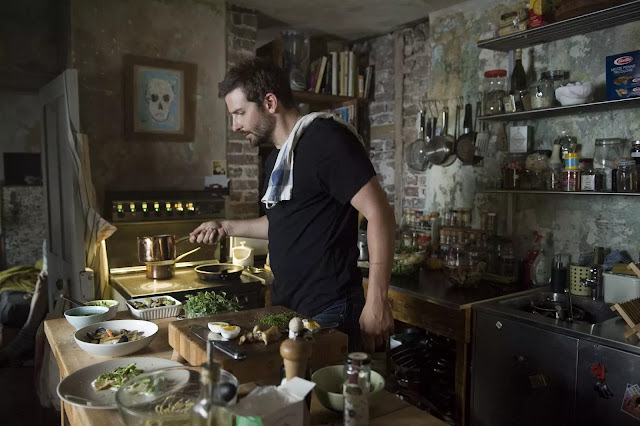 Cooper dons his chef whites again after starring in the short-lived TV show No Reservations, based on Anthony Bourdain’s autobiography, ten years ago. Both Bourdain and the fictional Adam Jones struggled with substance abuse in the past, with Burnt chronicling Adam’s quest to rise from the ashes. Cooper is charismatic as usual and gets to break out the French (both Français and swearing), but the character is aggressively unlikeable. The film doesn’t try to make his driven nature endearing, explaining it away with a tragic back-story and everyone around Adam makes concessions for him because he’s that talented a chef. The film’s attempts to humanise the character come across as treacly and manipulative. It’s a character who’s difficult to root for, and this is supposed to be charming in and of itself, when it isn’t at all. 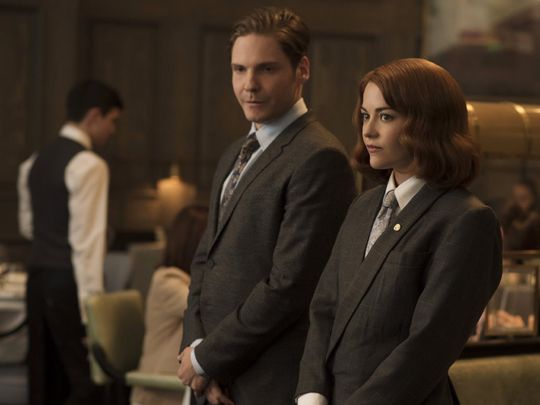 Cooper is backed up by a good supporting cast, though the characters aren’t drawn with too much depth. Brühl is an endearingly if cartoonishly prickly fussbudget as Tony. There’s an obvious homoerotic subtext between him and Adam that is acknowledged but of course, played very safe. Instead, Adam’s love interest is Miller’s Helene, marking a reunion for the American Sniper co-stars. The film goes the eye roll-inducing route of having Adam treat Helene condescendingly, even humiliating her in front of the other kitchen staff, but Helene eventually warms to him because he’s just that sexy. It seems that the main purpose Sy serves is as a volley partner for Cooper to bounce his French dialogue off of. Rhys’ portrayal of the chef whom Adam is at loggerheads with is stops a safe distance short of being the stereotypical bully, though it does lack nuance. Vikander may be one of this year’s breakout stars from her roles in Ex Machina and The Man From U.N.C.L.E., but she gets really little to do here as the one that got away. Emma Thompson is called upon to dispense gnomic advice as Adam’s therapist and Uma Thurman shows up in what is essentially a cameo as a food critic. 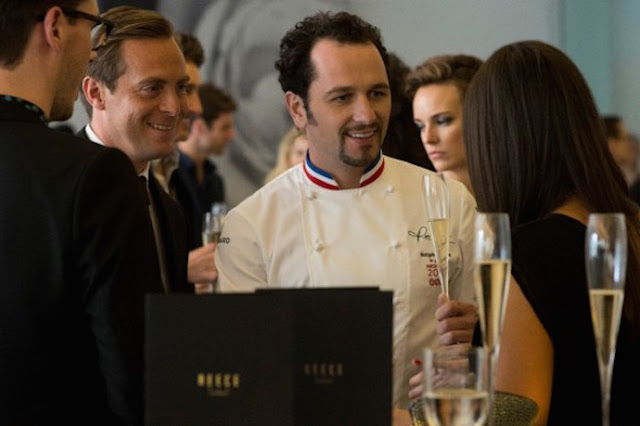 After Gordon Ramsay’s fiery temperament has been ingrained into popular culture, at this point, it seems like a movie about a chef who’s quiet and calm and treats his co-workers politely would, ironically enough, be more interesting than a film about an unstable hair-trigger culinary wunderkind. Cooper is watchable, but no matter how strongly the movie wills it, it’s tough to get in his corner. It’s a “rise-fall-rise” narrative with few twists and additions to the formula, but if good-looking people and even better-looking food is what you’re after, Burnt has got you covered. 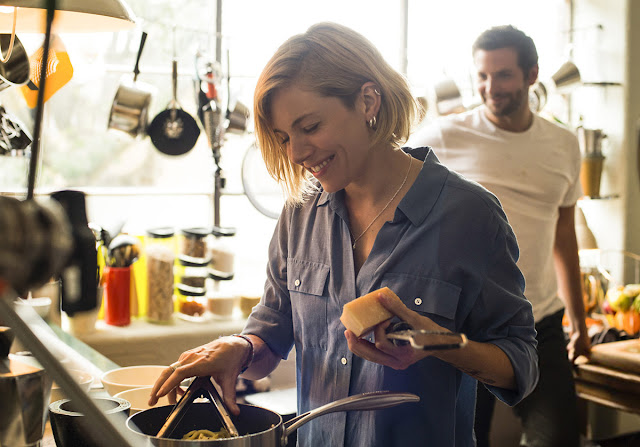 Summary: We’ve gotten through the bulk of this review without any corny food metaphors, so allow us this indulgence: Burnt is lukewarm at best.