The Mockingjay sings her last in the conclusion of the Hunger Games saga. The nation of Panem is in the throes of a revolutionary war, with Katniss Everdeen (Lawrence) continuing to bear the burden of being the symbolic figurehead of the uprising, the Mockingjay. Katniss teams up with a group of her closest allies – including Gale (Hemsworth), Finnick (Claflin), Cressida (Dormer) and Peeta (Hutcherson) – to infiltrate the palace of President Snow (Sutherland) and assassinate him. After an extended period of captivity in the Capitol, Peeta is deeply shaken by the psychological torture he was subjected to and becomes hostile towards Katniss. District 13’s President Alma Coin (Moore) and her right-hand man Plutarch (Hoffman) are counting on this final assault to be the tipping point that allows them to overthrow Snow. As Snow becomes increasingly obsessed with destroying Katniss and putting a stop to the revolution, Katniss realises that as high as the stakes were before, they are ever higher now, with the future of Panem in her hands. 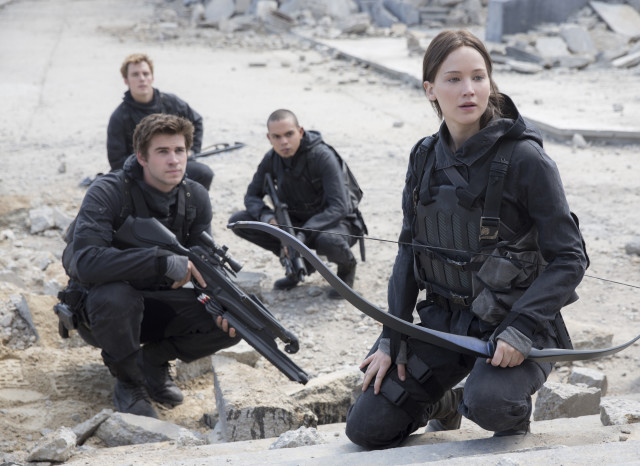 The expectations are high for the final instalment in the Hunger Games film series, not just because of the massive following the Suzanne Collins novels and the films themselves have gained, but because the filmmakers went the route of splitting the last book into two films, increasing the build-up for Part 2. Typically, movies that close out a blockbuster series promise colossal, epic battles and a surfeit of spectacle. For both better and worse, Mockingjay Part 2 takes a different route. The emphasis is on the politics, an element which has set the Hunger Games series apart from most teen-aimed properties. From the word “go”, this is an appropriately bleak affair, an unrelenting downer. True, The Hunger Games was never meant to be particularly happy or uplifting, but Mockingjay – Part 2 will alienate or even confuse viewers who aren’t 100% invested in what has come before. Audiences are expected to be familiar with the preceding films and, preferably, the books as well. 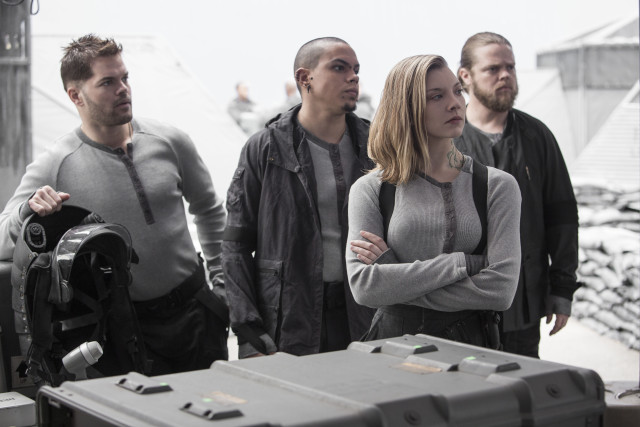 The Hunger Games series has taken a considerable amount of risks that have been rewarded critically and at the box office. After all, the basic premise of the first movie/book is a tournament in which kids kill each other for the entertainment of the masses. Finally overthrowing the tyrannical rule of President Snow should be a rousing triumph, but for a society as far gone as Panem, a quick fix simply won’t cut it. That the film not only acknowledges this but delves into the myriad ramifications of the revolution is admirably mature, if not viscerally exciting. Particularly during the first act, things can be a bit of a slog, and Mockingjay Part 2 struggles to gain momentum. The action sequences, in which Katniss and the District 13 Unit have to navigate booby-trapped stretches of the Capitol and fend off all and sundry threats that are flung at them, feel more perfunctory than truly thrilling. 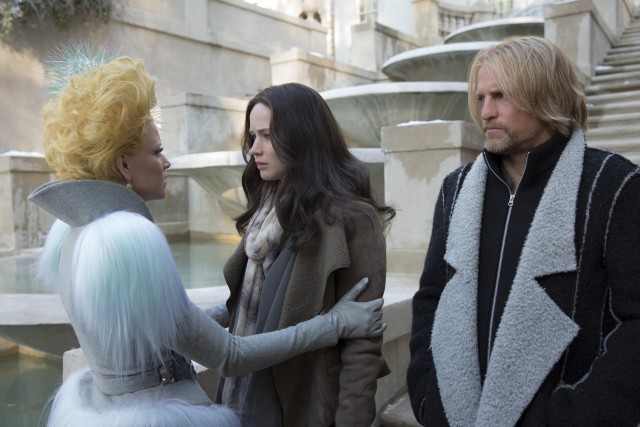 Jennifer Lawrence’s ever-rising star has paralleled Katniss’ journey from starving District 12 girl to bearer of the Mockingjay mantle, though we imagine being J-Law in real life is generally more fun than being Katniss. In a way, it’s a good thing that Jennifer Lawrence won’t be playing Katniss indefinitely and that she’s given an opportunity to see the character’s arc through to completion. Even more than in the earlier instalments, Mockingjay Part 2 asks the question “is this too much for one girl to handle?” point blank, answers “yes” and shows us all the ways in which it is too much. In the film’s opening scene, Katniss is trying to speak as she is being tended to by a nurse, after Peeta nearly crushed her windpipe in the previous film. There are many films about “finding one’s voice”, but instead of manufactured optimism, the Hunger Games series serves up unflinching brutality and Jennifer Lawrence’s final bow as one of this generation’s defining heroes is expectedly affecting and stirring. 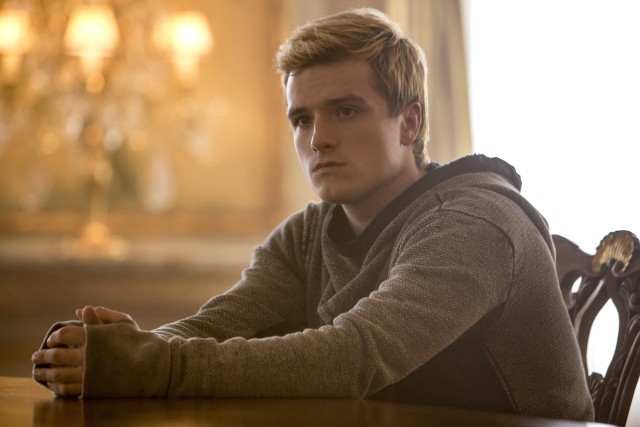 We also get a resolution to the love triangle, which director Francis Lawrence tries his darndest to couch as something secondary to the turning cogs of revolution. The wounded, feral quality that Peeta takes on is heart-rending and does give Hutcherson more shades to play, as well as switching up the dynamic between Peeta and Katniss. Gale’s bond with Katniss as a childhood hunting buddy is played up a little more in this one; Hemsworth has repeatedly demonstrated that he’s not an actor with immense range but not too much is demanded from him here. 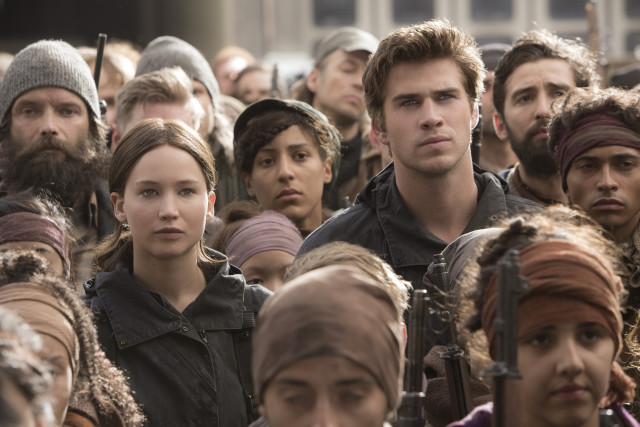 There is quite literally an army of supporting players, so it is natural that some will get shorter shrift than others. This reviewer did enjoy that the film is packed with badass female characters in addition to Katniss, including Dormer’s Cressida, Patina Miller’s Commander Paylor, Gwendoline Christie’s Commander Lyme, Michelle Forbes’ Lieutenant Jackson, Jena Malone’s Johanna Mason and Moore’s President Coin. Moore is especially fun to watch as we see President Coin making increasingly questionable but decently justified decisions. Elizabeth Banks, clad in increasingly fanciful ensembles, seems to be crying out from all the greyness that surrounds her. Sutherland proves he was the ideal choice for President Snow from the beginning, exuding a deep malice that is several layers past idle moustache-twirling villainy and making us all the more eager to see Snow get his comeuppance. 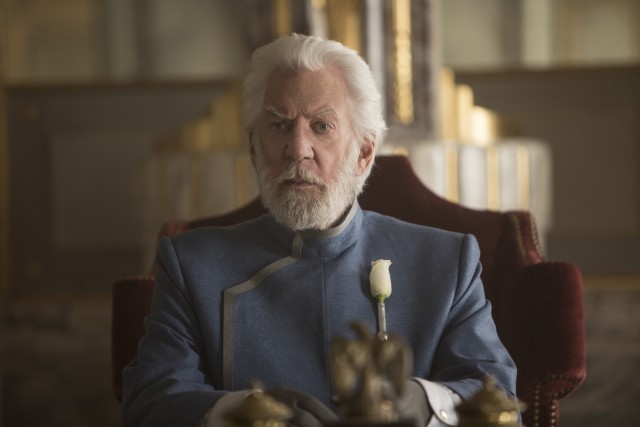 In an age where series finale blockbusters seem almost mandated to include no-holds-barred clashes of epic proportions, the Hunger Games series’ more cerebral conclusion is welcome. However, if one has a particularly short attention span and isn’t fully immersed in the world of Panem as established by the earlier films, it is possible to become bored and frustrated by the ponderous proceedings. This is sure to be a smash hit (at least until Star Wars invades cinemas), so we hope Lionsgate doesn’t try to futilely stretch things out with spinoffs and a reboot, though, like the fall of Panem, that does seem depressingly inevitable. 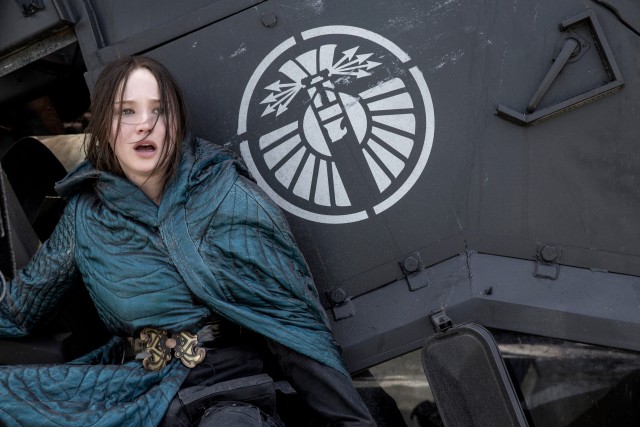 Summary: The Mockingjay’s last song is resonant if not especially rousing, the final chapter of the Hunger Games series largely satisfying but at times overwhelmingly downbeat.