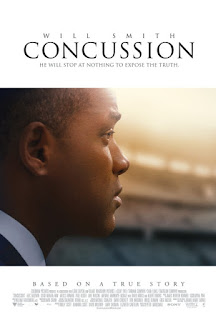 In this medical drama based on true events, something is driving America’s football players to madness, resulting in dangerous mental instability and suicides. Dr. Bennet Omalu (Smith) is a forensic neuro-pathologist from Nigeria, working under pathology consultant Cyril Wecht (Brooks) at the Allegheny County Coroner’s Office in Pittsburgh. Pittsburgh Steelers centre “Iron” Mike Webster (Morse) dies at age 50, homeless and deranged after suffering from dementia. Upon conducting the autopsy, Omalu finds it peculiar that Webster’s brain appears normal. The Steelers’ former team doctor Julian Bailes (Baldwin), having witnessed Webster’s decline first-hand, volunteers to help Omalu. Several other players display similar symptoms and die in quick succession. Omalu’s exhaustive research leads him to the conclusion that Chronic Traumatic Encephalopathy (CTE), a degenerative disease brought about by repeated brain trauma, is to blame. Omalu and his wife Prema Mutiso (Mbatha-Raw) must brave the uphill battle as the National Football League (NFL) aggressively attempts to discredit Omalu and bury his research.

Concussion is based on the GQ article Brain Game: Football Players and Concussions by Jeanne Marie Laskas. While a film about brain trauma research does not sound particularly exciting, the controversial hot-button issue of the NFL’s denial that collisions as part of playing football can lead to potentially fatal brain damage is fuel for a searing prestige picture. Writer-director Peter Landesman pitches Concussion as a rousing David vs. Goliath tale of the heroic little guy taking down the evil wealthy corporation, but the film always feels too slick and glossy and, as a result, inauthentic. While the death of noted football players from CTE is a tragedy that is worth discussing, the film tries to sell it as the worst thing to ever befall humanity in all of its history. There are multiple artificial attempts to pump the story up, all of it accompanied by an overblown score that sees composer James Newton Howard at his highest “sombre drama” setting.

Because of the immense power and prominence of the NFL, the “standing up to the man” quotient that Concussion possesses is worthy of admiration, but it’s insufficient basis on which to recommend the film. The romance between Omalu and Prema is treacly and feels entirely tacked on, while the film bends over backwards to simplify the medical jargon, boiling Omalu’s research down to its most easily understandable: football players get hit in the head; this is bad. There are things that Landesman gets right: Justin Strzelczyk’s (Matthew Willig) violent outburst against his wife and children is a frightening, haunting moment. When an angry football fan calls Omalu’s home to harass him, accusing him of “pussifying this country”, it’s a great example of how sports fans can sometimes be thuggish and bullying in their zealousness. 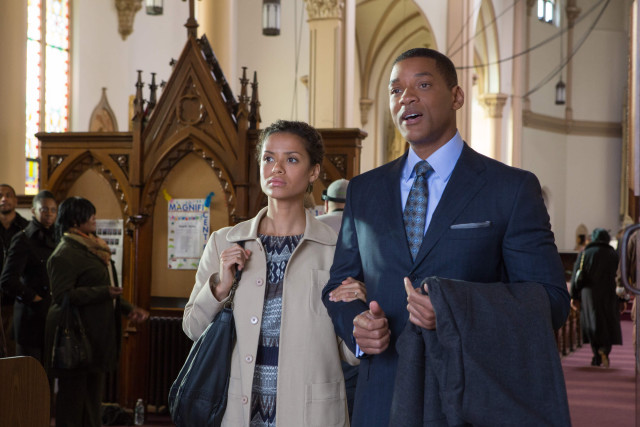 Smith is clearly gunning for Oscar glory with his performance in the film, and it is blatant stunt casting. While Smith has proven himself capable of strong, absorbing performances, he stops a good distance short of being convincing as Dr. Bennet Omalu. In a truly great performance, particularly a portrayal of a real-life person, the actor should completely vanish into the role. It’s evident that Smith has put effort into the performance, but when all is said and done, he’s still A-list movie star Will Smith. Even putting aside the fact that Smith bears almost no resemblance to the actual Omalu, his presence is distracting. Mbatha-Raw gets little to do as the designated love interest, and a scene in which Prema teaches Omalu how to dance at a club is almost cringe-worthy. Brooks and Baldwin contribute solid performances and Morse’s brief appearance as Webster, Pittsburgh’s favourite son-turned mad vagrant, is effectively disturbing and tragic. 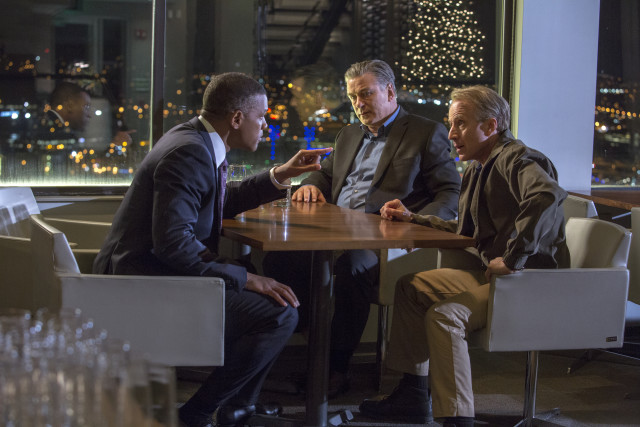 The nobility that drives Concussion often crosses over into smothering self-importance. Omalu has many speeches about the American dream, and he is depicted as an American hero who just happens to come from Nigeria. The shattering of Omalu’s idealism is handled via awkward chunks of dialogue. This is a film with something to say and it says so loudly and with conviction, but the feeling that Omalu’s story has been squeezed into the standard “inspirational underdog” tale mould is very hard to shake. Concussion is more Oscar bait than it is incisive exposé, and as much as it takes the NFL to task, it’s still relatively early days for CTE research and the full impact has yet to play out.

Summary: Concussion’s righteous indignation can only carry it so far, with a clumsy screenplay and a lead actor who’s not the best fit for the part letting it down.

Jedd Jong
Posted by Jedd the Jedi at 1:27 AM