Venture into the tumultuous waters of Cape Cod to witness of one of the most harrowing rescues in maritime history in this historical disaster drama. It is February 1952 and the S.S Pendleton, a T2 oil tanker, is caught in a severe storm off the Chatham coast, breaking clean in twain. Bernie Webber (Pine), a newly-engaged Coast Guard crewman, is dispatched by Chief Warrant Officer Daniel Cluff (Bana) to take his tiny lifeboat out to sea to rescue the Pendleton’s crew. Bernie takes Richard Livesey (Foster), Andrew Fitzgerald (Gallner) and Ervin Maske (John Magaro) with him. Aboard the severed stern section of the Pendleton, first assistant engineer Ray Sybert (Affleck) is forced to take charge, devising a method to keep what’s left of the ship afloat as long as possible. Bernie’s fiancé Miriam Pentinen (Grainger), along with the townsfolk of Chatham, await the safe return of Bernie, his crew and the men of the Pendleton, as their odds of survival grow slimmer by the minute.

The Finest Hours is based on the book of the same name, subtitled “The True Story of the U.S. Coast Guard's Most Daring Sea Rescue”, by Michael J. Tougias and Casey Sherman. Director Craig Gillespie has delivered a resolutely old-fashioned adventure drama, harking back to the days “when men were men”, so to speak. While there’s definitely a certain dignity to The Finest Hours in its celebration of heroes who aren’t widely known to non-maritime history buffs, it’s also something of a drag in parts. There are individual sequences that are genuine nail-biters featuring convincing visual and special effects work, but in between those, there’s a curious dearth of momentum or urgency, particularly since this revolves around a time-sensitive rescue attempt. In fact, it’s only around 45 minutes into the film that Bernie and his crew actually get into their lifeboat and set sail. 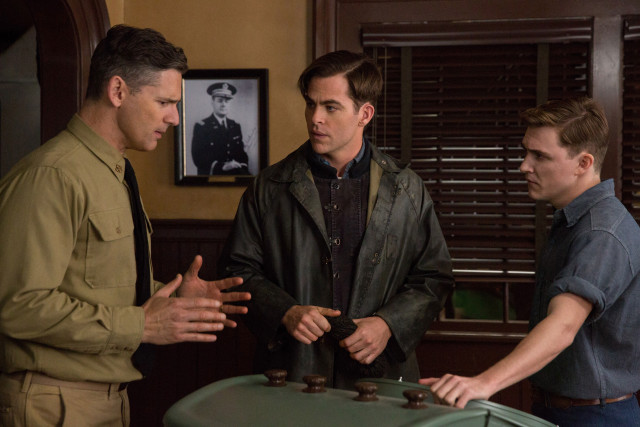 While Pine is more Abercrombie pretty boy than Old Hollywood rugged, there’s a matinee idol quality to him that makes him an ideal candidate to portray the determined, courageous hero in a period adventure piece. That “Bawston” accent he’s attempting is iffy, though. The film doesn’t begin on the high seas, but rather by establishing the romance between Bernie and Miriam, hoping that this will be the emotional anchor. Unfortunately, it’s not a particularly compelling romance and this element of the film has been dramatized the most from how things really unfolded. Miriam is portrayed by Grainger as a headstrong, proactive woman, but when she charges into Cluff’s office to demand that he makes Bernie turn the lifeboat around, it comes off more as an annoyance than a loving act of concern. The trope of the worried significant other back home pining for our hero’s safe return is often unavoidable in films of this type, and the attempts to add to this are generally unsuccessful. 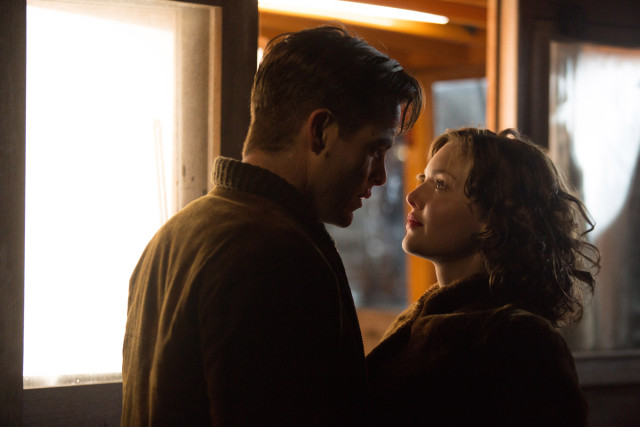 Casey Affleck’s demeanour is not as traditionally masculine and heroic as that of his older brother Ben, but he does sell the role of someone who has to think fast and work hard under pressure. As the boss from out of town who is not generally well-liked, Bana has sufficient gravitas but noticeably wrestles with the character’s southern accent. The performances are generally serviceable but ultimately, there isn’t enough to distinguish most of the crew members of the Pendleton, or the men with Bernie in the lifeboat, for that matter. 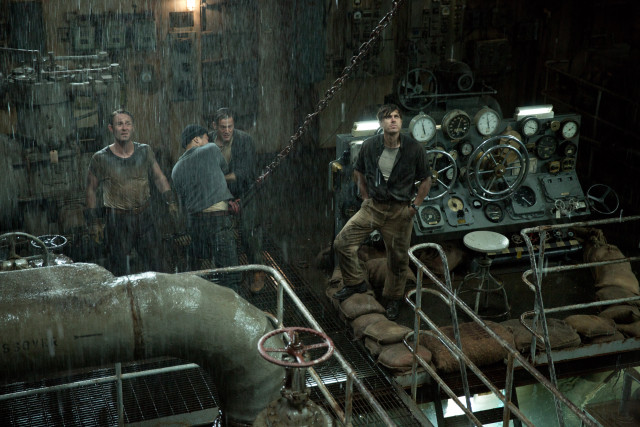 Michael Corenblith’s production design and Louise Frogley’s costume design bring a level of authenticity to The Finest Hours and in the grand scheme of movies billed as “based on a true story”, The Finest Hours makes relatively minor deviations from established history. This is director Gillespie’s second film for Walt Disney Studios, following sports drama Million Dollar Arm, also based on a true story. While The Finest Hours is Gillespie’s most ambitious film on the technical front, it pushes no boundaries in its narrative. The startlingly intense and immersive scenes of the tiny lifeboat getting ravaged by immense waves are thrilling, but the film never quite reaches the rousing, inspirational heights it’s aiming for.

Summary: Harking back to the disaster dramas of yesteryear, The Finest Hours has its riveting moments but the story, as remarkable as it is, ends up insufficiently impactful.