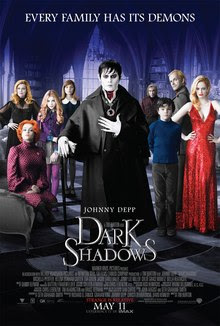 Tim Burton seems to have found his magic formula for success: slap pale makeup onto Johnny Depp, dress him in Colleen Atwood-designed costumes and have Danny Elfman playing in the background. Here, Burton and his muse take on Dark Shadows, the ‘60s supernatural soap opera created by Dan Curtis. There have been several attempts to revive the series, all falling flat. Do Burton and Depp fare any better?

Depp plays Barnabas Collins, the wealthy heir to a fishery empire, whose family had relocated from Liverpool to Maine in the 18th Century. Servant girl Angelique (Green) has fallen for him, but Barnabas spurns her love for Josette (Bella Heathcote). Angelique, secretly a witch, kills Barnabas’ parents, his true love and curses Barnabas to become a vampire. The angry townspeople lock him in a steel coffin and bury him alive.

When the trailer for the film was released, many criticised the apparently comedic tone of the film, especially when compared to the deadly serious source material. In the hands of Johnny Depp, Barnabas has become his usual quirky, fish-out-of-water (fitting given the fishery town setting) eccentric. Much of the film plays on his unfamiliarity with 70’s-era America, and while some moments are amusing, other gags are about as old as Barnabas himself.

The main thing going for Dark Shadows is its 70s setting, as reinterpreted by Tim Burton. His gothic sensibilities and the age of hippies and bad haircuts may seem odd bedfellows, but the collision of these two worlds is visually arresting and undoubtedly stylish, and there’s plenty of nostalgia to be had between the lava lamps, the Carpenters and Alice Cooper as himself (whom Barnabas dubs “the ugliest woman I’ve ever seen”).

The cast is also fairly impressive and generally well-chosen.  Femme fatale Eva Green clearly enjoys vamping (heh) it up and Chloe Moretz gives her a run for her money, which wouldn’t be so unsettling if the actress wasn’t 15 years old. Michelle Pfeiffer makes for a good lady-of-the-house, and Helena Bonham Carter is typically, entertainingly nuts. Bella Heathcote lends a wide-eyed, other-worldly appeal to Josette/Victoria, but is otherwise weaker than her cast mates. There’s also a cameo from another famous cinematic vampire, who has previously played Depp’s father in another Burton film.

Beyond that however, the cracks start to show, just as they do on Angelique’s face. The film struggles to find a cohesive tone, and the horror and comedy elements don’t blend as well as they should. Burton’s fascination with the grotesque overwhelms other components of the film, and there consequently isn’t much room for meaningful character development. Sometimes the campy approach works for the movie, but just as many times it works against it, diminishing any semblance of weight.

Another point of contention is that Burton seems to be cribbing from another famous gothic TV family, as evidenced by the film’s tagline “strange is relative” being uncannily similar to “weird is relative”. Truth be told, Morticia, Wednesday, Lurch and Uncle Fester are generally more interesting to watch than the Collins-Stoddards.

Long-time fans of Burton, Depp and especially the two together are likely to enjoy this, but it’s really more of the same from both, and is nowhere near as inventive or clever as it imagines itself to be. Still, if it’s a vampire having a chat with hippies you’re after, you won’t be too disappointed.

SUMMARY: Aimed squarely at those who speak Burton-ese, but unlikely to make converts of those who don’t, leaving them in the shadows.