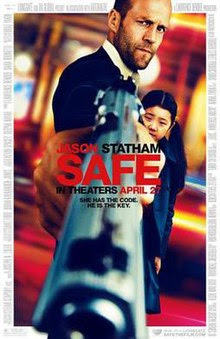 Jason Statham is at it again, earning his keep the only way he knows how: punching and kicking his way through the Chinese and Russian mobs and the New York Police Department. As ex-cop Luke Wright, he is reduced to cage fighting and sleeping in shelters after he snitches on his corrupt colleagues. It’s just his luck that he comes across Mei (Chan), a 12-year-old Chinese girl with superhuman memory who carries in her head a complex series of numbers. It’s also just his luck that Mei is a pawn of Chinese mob boss Han Jiao (Hong), and police captain Wolf (Robert Burke) is playing both the Chinese and the Russians as all three parties hunt down Luke and his new charge.

A YouTube comment on the trailer for the film said it best – “I liked it better when it was called “Mercury Rising”. Indeed, the earlier Bruce Willis film was more entertaining, and Miko Hughes, who played the kid with special abilities in it, was a far better child actor than Catherine Chan is. Safe is not so much outright bad as it is painfully derivative and almost profoundly generic. As usual, Jason Statham is playing the only character he ever plays, the gruff and street smart guy who also happens to be a skilled martial artist and sharpshooter.

The brutal action sequences in the movie are so-so – like most of the movie, they’re not awful, it’s just that we’ve seen the like many times before. There are some shootouts in gambling dens and hotels, a subway train brawl and a car chase with Statham driving against NYC traffic – normal action movie fare. As far as the plot is concerned, it’s just all too straightforward. There are no real surprises or curveballs – it’s just as well that everything unfolds quickly enough.

The crooked cops that make up one third of the movie’s villains and the mayor whom they answer to are as flat and one-note as they come. So are the Russian bad guys – poor Igor Jijikine, most famous as Col. Dovchenko in Indiana Jones and the Kingdom of the Crystal Skull, is probably stuck playing Russian mob henchmen for the rest of his career. Also, James Hong’s Mandarin Chinese is pretty bad, probably due to all the years he’s spent in the States. And let’s not forget the stereotypical portrayal of Chinese people as maths geniuses, mobsters or convenience store owners. It was rather bold of the filmmakers to demonize the entire NYPD, though.

“I’ve seen him fight. Bad business for you,” deadpans Mei. Altogether, this was pretty bad business for Statham and company – at its worst; it seems almost like a throwaway direct-to-video action thriller. Here’s hoping Statham redeems himself come The Expendables 2 a little later this year.

SUMMARY: A paint-by-numbers action thriller that doesn’t stand out in any way, this would be right at home as a movie you might watch on HBO in a hotel room to pass the time.