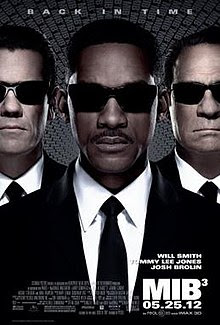 Everyone knows it’s sexy to wear black. This summer, Nick Fury is decked out in a flowing black trenchcoat. Black Widow and Catwoman squeeze into black catsuits. Batman dons his black armour as usual. And of course, the titular government operatives of this film have returned to suit up. Ten years is a long time to be gone, but truth be told, Will Smith as Agent J hasn’t seemed to age a day.

That’s less that can be said for his curmudgeon of a partner, Agent K (Jones). He’s more dour than ever, and Agent J seems frustrated that he can’t connect with the older gentleman as a friend. A dangerous alien criminal from K’s past, Boris the Animal (Jemaine Clement) has escaped from a maximum security jail, his prison break forming the opening sequence.

Boris causes a rift in the space-time continuum, and when J goes to work at MIB headquarters the next day, his new boss Agent O (Emma Thompson) informs him that Agent K died 60 years ago. A gobsmacked J travels back in time, where he meets the younger K (Brolin) and the two go about trying the prevent the former’s death and returning things to the way they should be, as two versions of Boris stand in the duo’s way.

Will Smith suggested the story to director Barry Sonnenfeld while they were filming the second Men In Black film, as a way to explore K’s backstory. So it’s a little puzzling that while the idea started incubating so long ago, the movie infamously began shooting without a completed script. This definitely hurt the end product, especially since the plot is somewhat complex. While time travel is a convenient plot device, the mechanics of time travel are equally inconvenient to convey onscreen, and the portrayal is iffy to say the least – cue some clunky bits of exposition.

But audiences don’t go to a Men In Black movie for a discourse in quantum physics – they go to see neuralysers, gross-out aliens, laser gunfights and madcap chases. Men In Black 3 contains all of these, but there’s a spark missing. While a marked improvement on the second instalment, this can’t help but feel a little tired and a little old, a sequel ten years too late to care very much about. There are also recognizable bits of other shows floating around – the 60’s setting seems to cash in on the Mad Men craze, the gyro-cycles that J and K ride are very reminiscent of the wheelbike General Greivous used in Star Wars Episode III: Revenge of the Sith, and the “jetpacks” look quite a bit like Doctor Who’s Daleks.

The biggest success of the first Men In Black movie was the buddy cop pairing of Will Smith and Tommy Lee Jones, who couldn’t be more different. Their chemistry and dynamic brings to mind such successful teams as Mel Gibson and Danny Glover in the Lethal Weapon movies and even Roy Scheider and Gene Hackman in The French Connection. Thankfully, Smith seems to work well with Josh Brolin too, and the latter’s two-hour-long Tommy Lee Jones impression is uncanny and entertaining.

Jemaine Clement’s one-armed Boris is essentially a pirate, prone to baring his teeth, growling and shooting up his victims with bony spikes courtesy of an insectoid organism living in his hand – something like a demonic shoulder-parrot. The character is sort of the alien equivalent of Ian McShane as Blackbeard in last year’s Pirates of the Caribbean sequel. While he’s certainly menacing, there isn’t much that makes him a standout villain.

Once again, Academy Award-winning makeup artist Rick Baker uses his talents to create a menagerie of extraterrestrial critters, but the copious amounts of CGI don’t quite match up to that standard and appear a little plasticky, particularly during the climax set during the Apollo 11 rocket launch at Cape Canaveral. The 3D conversion is half-decent and adds somewhat to scenes that take place at dizzying heights. The action sequences on the whole aren’t anything very special, and the unique possibilities presented by the 60s setting seem to go unnoticed to the filmmakers.

On the humour front, there are several amusing gags, the best of which is how Agent J travels back in time – as he leaps off the Empire State Building, he flies back in time, through the great depression (a suicidal stock broker is seen falling behind him) and the victory parade marking the end of World War II. As is MIB tradition, more celebrities are “outed” as aliens, including Lady Gaga and Mick Jagger, and Andy Warhol (Bill Hader) is revealed to be an MIB agent sick of his disguise as the pretentious artist. However, there are also moments where Will Smith, quintessential cool nice guy though he may be, borders on grating.

Is Men In Black 3 an entertaining diversion? Yes. Does it offer up a crowd-pleasing blend of sci-fi, comedy and action? Mostly yes. Is it anything groundbreaking? Not really. Will it stand up against this summer’s heavy-hitting blockbusters? Most likely not.

SUMMARY: Men In Black 3 is less a spiffy suit and more a nice, worn pair of Bermudas: it won’t impress anyone, the colour’s faded a little, they don’t fit as well as they used to, but you like wearing them anyway.