Roger Ebert: A Life at the Movies 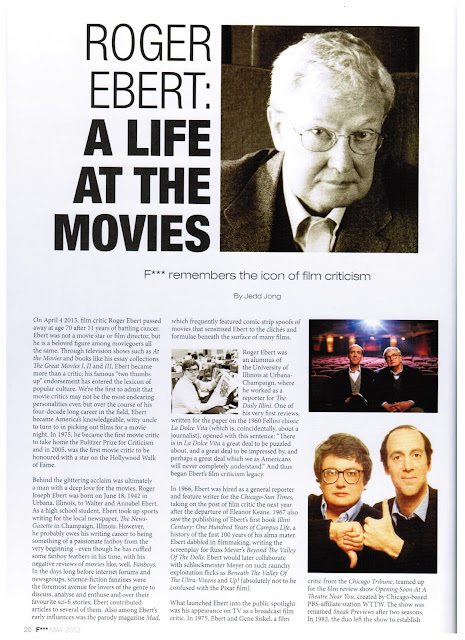 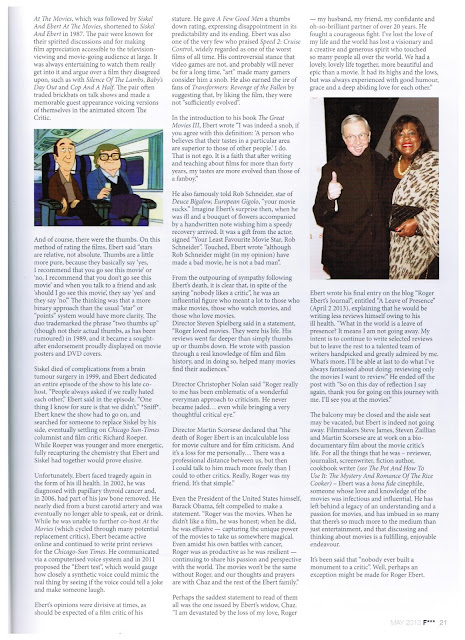 ROGER EBERT: A LIFE AT THE MOVIES

On April 4 2013, film critic Roger Ebert passed away at age 70 after 11 years of battling cancer. Ebert was not a movie star or film director, but he is a beloved figure among moviegoers all the same. Through television shows such as At the Movies and books like his essay collections The Great Movies I, II and III, Ebert became more than a critic; his famous “two thumbs up” endorsement entering the popular culture lexicon. We’re the first to admit that movie critics may not be the most endearing personalities ever, but over the course of his four-decade long career in the field, Ebert became America’s knowledgeable, witty uncle to turn to in picking out films for a movie night. In 1975, Roger Ebert became the first movie critic to take home the Pulitzer Prize for Criticism and in 2005, was the first movie critic to be honoured with a star on the Hollywood Walk of Fame.

Behind the glittering acclaim was ultimately a man with a deep love for the movies. Roger Joseph Ebert was born on June 18, 1942 in Urbana Illinois, to Walter and Annabel Ebert. As a high school student, Ebert took up sports writing for the local newspaper, The News-Gazette in Champaign, Illinois. However, he probably owes his writing career to being something of a passionate fanboy from the very beginning - even though he has ruffled some fanboy feathers in his time, with his negative reviews of movies like, well, Fanboys. In the days long before internet forums and newsgroups, science-fiction fanzines were the foremost avenue for lovers of the genre to discuss, analyse and enthuse and over their favourite sci-fi stories; Ebert contributing articles to several of them. Also among Ebert’s early influences was the parody magazine Mad, which frequently featured comic strip spoofs of movies that sensitized Ebert to the clichés and formulae beneath the surface of many films.

Roger Ebert was an alumni of the University of Illinois at Urbana-Champaign, where he worked as a reporter for The Daily Illini. One of his very first reviews, written for the paper and on the 1960 Fellini classic La Dolce Vita (which is, coincidentally, about a journalist), opened with this sentence: “There is in La Dolce Vita a great deal to be puzzled about, and a great deal to be impressed by, and perhaps a great deal which we as Americans will never completely understand.” And thus began Ebert’s film criticism legacy.

In 1966, Ebert was hired as a general reporter and feature writer for the Chicago-Sun Times, taking on the post of film critic the next year after the departure of Eleanor Keane. 1967 also saw the publishing of Ebert’s first book Illini Century: One Hundred Years of Campus Life, a history of the first 100 years of his alma mater. Ebert dabbled in filmmaking, writing the screenplay for Russ Meyer’s Beyond the Valley of the Dolls. Ebert would further collaborate with schlockmeister Meyer on such raunchy exploitation flicks as Beneath the Valley of the Ultra-Vixens and Up! (absolutely not to be confused with the Pixar film).

What launched Roger Ebert into the public spotlight was his appearance on TV as a broadcast film critic. In 1975, Ebert and Gene Siskel, a film critic from the Chicago Tribune, teamed up for the film review show Opening Soon at a Theatre near You, created by Chicago-based PBS-affiliate station WTTW. The show was renamed Sneak Previews after two seasons. In 1982, the duo left the show to establish At the Movies, which was followed by Siskel and Ebert and the Movies, shortened to Siskel and Ebert in 1987. The pair were known for their spirited discussions and for making film appreciation accessible to the television-viewing and movie-going audience at large. It was always entertaining to watch them really get into it and argue over a film they disagreed upon, such as with Silence of the Lambs, Baby’s Day Out and Cop and A Half. The pair often traded brickbats on talk shows and made a memorable guest appearance voicing versions of themselves in the animated sitcom The Critic.

And of course, there were the thumbs. On this method of rating the films, Ebert said “stars are relative, not absolute. Thumbs are a little more pure, because they basically say ‘yes, I recommend that you go see this movie’ or ‘no, I recommend that you don’t go see this movie’ and when you talk to a friend and ask ‘should I go see this movie’, they say ‘yes’ and they say ‘no’.” The thinking was that a more binary approach that the usual “star” or “points” system would have more clarity. The duo trademarked the phrase “two thumbs up” (though not their actual thumbs, as has been rumoured) in 1989, and it became a sought-after endorsement proudly displayed on movie posters and DVD covers.

Gene Siskel died from complications of a brain tumour surgery in 1999, and Ebert dedicated an entire episode of the show to his late co-host. “People always asked if we really hated each other,” Ebert said in the episode. “One thing I know for sure is that we didn’t.” *Sniff*. Ebert knew the show had to go on, and searched for someone to replace Siskel by his side, eventually settling on Chicago Sun-Times columnist and film critic Richard Roeper. While Roeper was younger and more energetic, fully recapturing the chemistry that Ebert and Siskel had together would prove elusive.

Unfortunately, Ebert would face tragedy again in the form of his ill health. In 2002, he was diagnosed with papillary thyroid cancer and in 2006 had part of his jaw bone removed. He nearly died from a burst carotid artery and was eventually no longer able to speak, eat or drink. While he was unable to further co-host At the Movies (which cycled through many potential replacement critics), Ebert became active online and continued to write print reviews for the Chicago-Sun Times. He communicated via a computerised voice system and in 2011 proposed the “Ebert test”, which would gauge how closely a synthetic voice could mimic the real thing by seeing if the voice could tell a joke and make someone laugh.

Roger Ebert’s opinions were divisive at times, as should be expected of a film critic of his stature. He gave A Few Good Men a thumbs down rating, expressing disappointment in its predictability and its ending. Ebert was also one of the very few who praised Speed 2: Cruise Control, widely regarded as one of the worst films of all time. His controversial stance that video games are not, and probably will never be for a long time, “art” made many gamers consider him a snob. He also earned the ire of fans of Transformers: Revenge of the Fallen by suggesting that by liking the film, they were not “sufficiently evolved”.

In the introduction to his book The Great Movies III, Ebert wrote “I was indeed a snob, if you agree with this definition: ‘A person who believes that their tastes in a particular area are superior to those of other people.’ I do. That is not ego. It is a faith that after writing and teaching about films for more than forty years, my tastes are more evolved than those of a fanboy.”

He also famously told Rob Schneider, star of Deuce Bigalow, European Gigolo, “your movie sucks.” Imagine Ebert’s surprise then, when he was ill and a bouquet of flowers accompanied by a handwritten note wishing him a speedy recovery arrived. It was a gift from the actor, signed “Your Least Favourite Movie Star, Rob Schneider”. Touched, Ebert wrote “although Rob Schneider might (in my opinion) have made a bad movie, he is not a bad man”.

From the outpouring of sympathy following Ebert’s death, it is clear that in spite of the saying “nobody likes a critic”, he was an influential figure who meant a lot to those who make movies, those who watch movies, and those who love movies.

Director Steven Spielberg said in a statement, "Roger loved movies. They were his life. His reviews went far deeper than simply thumbs up or thumbs down. He wrote with passion through a real knowledge of film and film history, and in doing so, helped many movies find their audiences.”

Director Christopher Nolan said “Roger really to me has been emblematic of a wonderful everyman approach to criticism. He never became jaded… even while bringing a very thoughtful critical eye.”
Director Martin Scorsese declared that “the death of Roger Ebert is an incalculable loss for movie culture and for film criticism. And it’s a loss for me personally…There was a professional distance between us, but then I could talk to him much more freely than I could to other critics. Really, Roger was my friend. It’s that simple.”

Even the President of the United States himself, Barack Obama, felt compelled to make a statement. "Roger was the movies. When he didn't like a film, he was honest; when he did, he was effusive — capturing the unique power of the movies to take us somewhere magical. Even amidst his own battles with cancer, Roger was as productive as he was resilient — continuing to share his passion and perspective with the world. The movies won't be the same without Roger, and our thoughts and prayers are with Chaz and the rest of the Ebert family."

Perhaps the saddest statement to read of them all was the one issued by Ebert’s widow, Chaz. "I am devastated by the loss of my love, Roger — my husband, my friend, my confidante and oh-so-brilliant partner of over 20 years. He fought a courageous fight. I've lost the love of my life and the world has lost a visionary and a creative and generous spirit who touched so many people all over the world. We had a lovely, lovely life together, more beautiful and epic than a movie. It had its highs and the lows, but was always experienced with good humour, grace and a deep abiding love for each other."

Roger Ebert wrote his final entry on the blog “Roger Ebert’s Journal”, entitled “A Leave of Presence” (April 2 2013), explaining that he would be writing less reviews himself owing to his ill health. “What in the world is a leave of presence? It means I am not going away. My intent is to continue to write selected reviews but to leave the rest to a talented team of writers handpicked and greatly admired by me. What's more, I'll be able at last to do what I've always fantasized about doing: reviewing only the movies I want to review.” He ended off the post with “So on this day of reflection I say again, thank you for going on this journey with me. I'll see you at the movies.”

The balcony may be closed and the aisle seat may be vacated, but Ebert is indeed not going away. Filmmakers Steve James, Steven Zaillian and Martin Scorsese are at work on a bio-documentary film about the movie critic’s life. For all the things that he was – reviewer, journalist, screenwriter, fiction author, cookbook writer (see The Pot and How to Use It: The Mystery and Romance of the Rice Cooker) – Ebert was a bona fide cinephile, someone whose love and knowledge of the movies was infectious and influential. He has left behind a legacy of an understanding and a passion for movies, and has imbued in so many that there’s so much more to the medium than just entertainment, and that discussing and thinking about movies is a fulfilling, enjoyable endeavour.

It’s been said that “nobody ever built a monument to a critic”. Well, perhaps an exception might be made for Roger Ebert.