These days, nothing quite gets a movie studio excited like the F word – “franchise”. Hollywood honchos hanker for the next Marvel cinematic universe, the next Star Wars, Fast and Furious or Twilight. Summit Entertainment, the studio behind the sparkly vampire chronicles, has found a property with the potential for aggressive expansion: the Ender Saga or the “Enderverse”, a series of science fiction books by Orson Scott Card which were, well, a game-changer.

Following an attack on earth by insectoid alien invaders known as “Formics”, a battle school is established to train the next generation of International Fleet cadets for when the Formics strike again. Ender Wiggin (Butterfield) is a particularly promising student who is earmarked by Col. Hyrum Graff (Ford) and Major Gwen Anderson (Davis) as a potential leader of earth’s military forces. Ender’s siblings, Valentine (Breslin) and Peter (Jimmy Pinchak) failed to make it through the program, so as if the pressure of the fate of the world being in his hands wasn’t enough, Ender has to cope with that. An integral part of the training is the game of the title; a kind of zero-gravity strategy-based amalgam of football and laser tag. Ender has to contend with being bullied, but finds friendship in the form of Petra Arkanian (Steinfeld), one of the few female students in battle school. Ender soon finds himself among the cream of the crop and studying under war hero Mazer Rackham (Kingsley) as the clock ticks away to the next invasion.

The novel Ender’s Game, expanded from a short story of the same name, was published in 1985. The book and its sequel Speaker for the Dead clinched the Hugo and Nebula awards, two of the most prestigious honours in science fiction. A film adaptation has been in the works for many years, with The Phantom Menace’s Jake Lloyd considered for the title role at one point. The book is regarded as something of a modern classic and perhaps film franchises centred on young characters, like the Harry Potter movies, paved the way for this adaptation to finally get off the ground. 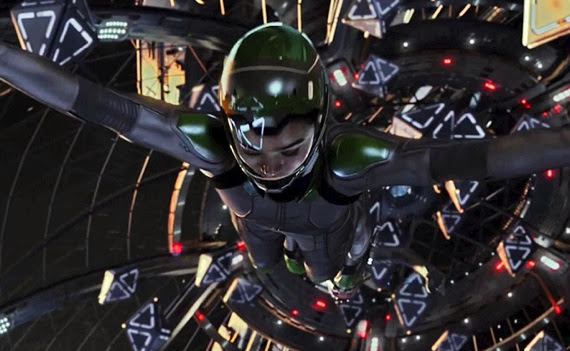 The premise of using games and simulations in preparation for war proved prescient, seeing as how video game technology has been co-opted into military training over the last decade or so. The film focuses on the process of the practise and trials leading up to combat instead of the battle itself, so writer-director Gavin Hood has the responsibility of making sure certain stakes and a sense of danger are still established and that viewers will be interested in seeing the games played out instead of yelling “get to the real fighting already!” at the screen. He is somewhat successful in this regard, but the film’s pacing is uneven and jittery and there is a fair bit of exposition and backstory to get out of the way in its first half. Also, pretty much every “boot camp” or “military school” trope from the movies finds its way into Ender’s Game. 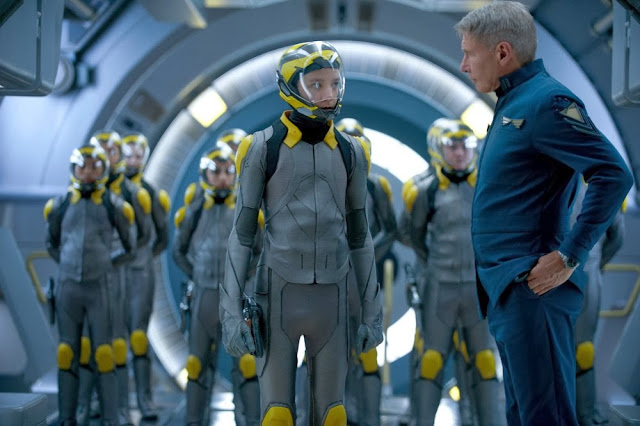 Big-budget spectacle and sci-fi action razzle dazzle is a lot more accessible to today’s audiences than before. That’s another way of saying moviegoers have become harder to impress. Ender’s Game is not a badly-designed movie by any standard, it’s just that its world of space stations, futuristic dorm rooms, grey uniforms and termite mound-style enemy terrain carries a sense of familiarity with it and doesn’t pack quite enough punch to pull one into the world. The film’s major action sequences take place within the battle room, the balletic zero-gravity sequences well-choreographed and stunt coordinator Garrett Warren’s wire-work innovations making the scenes suitably dynamic. It’s a shame this film comes right on the heels of Gravity, which will be hard to top. 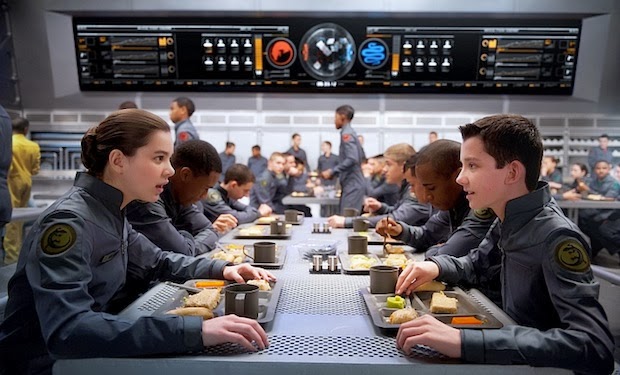 Asa Butterfield is a competent lead, playing Ender not as a know-it-all whiz or an insufferable adult-kid but as a “chosen one” who just has to deal. Hailee Steinfeld is very likeable as Petra and the moments in which she and Ender train together are welcome respite from the harshness of the battle school environment. A role like Hyrum Graff is best handled by an actor of stature and who has a sci-fi pedigree and Harrison Ford certainly fits the bill. Sure, there’s a lot of the scowling and looking grumpy typical of Ford’s recent career, but he’s able to bring out some layers, the character not just an authority figure but a manipulative and canny one at that. Ben Kingsley, sporting facial Tā moko Māori tattoos, is only in this for the last section of the film and doesn’t get too much to do, but he’s good. 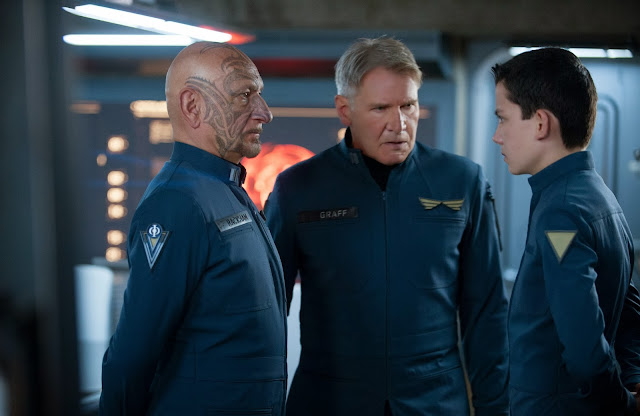 Ender’s Game will give teen audiences something to chew on and it is good to see a film aimed at this demographic that isn’t pointless and inane. Sure, the tackling of issues such as ethics in war and theme of empathy vs. violence may come off as clumsy or heavy handed, but at least they were given some attention. The film’s most intriguing moments come in the form of a mind game in which Ender is represented by a mouse, faced with a giant and other allegorical obstacles – and there’s the attention-grabbing ending, too. On the whole, Gavin Hood’s take on the material is more effective than the over-the-top satire Paul Verhoeven wrought with his Starship Troopers adaptation, even if the Ender’s Game team doesn’t quite hit a home run. 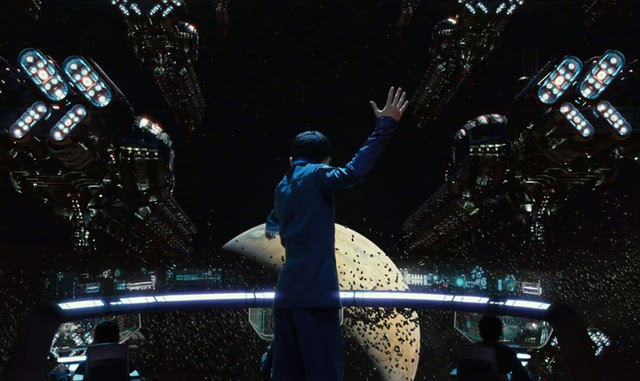 SUMMARY: Certainly not the easiest story to bring to the screen, Ender’s Game presents a blend of mature themes and sci-fi action – a balancing act that mostly pays off.

Jedd Jong
Posted by Jedd the Jedi at 9:19 PM