Give Credit to Contemporary Movies

This was a letter sent in to the Straits Times Life! Saturday mail bag last week:

Here's the letter I wrote in reply to it: 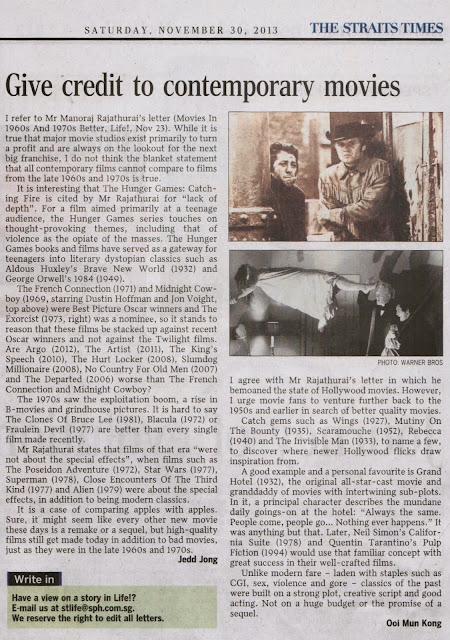 This was Mr. Rajathurai's follow-up letter: 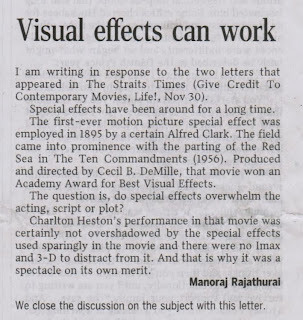 Text:
I refer to the letter “Movies in 1960s and 1970s better” by Manoraj Rajathurai (Life, Nov 23). While it is true that major movie studios exist primarily to turn a profit and are always on the lookout for the next big franchise, I do not think the blanket statement that all contemporary films cannot compare to films from the late 60s and 70s is true.


It is interesting that The Hunger Games: Catching Fire is cited by Mr. Rajathurai as having a “lack of depth”. For a film aimed primarily at a teenaged audience, the Hunger Games series touches on thought-provoking, compelling themes, including that of violence as the opiate of the masses. The Hunger Games books and films have served as a gateway for teenagers into literary dystopian classics like Huxley’s Brave New World and Orwell’s 1984.

The French Connection and Midnight Cowboy were Best Picture Oscar winners and The Exorcist was a nominee, so it stands to reason that these films be stacked up against recent Oscar winners, as opposed to the Twilight films. Are Argo, The Artist, The King’s Speech, The Hurt Locker, Slumdog Millionaire, No Country for Old Men and The Departed really worse than The French Connection and Midnight Cowboy?

The 1970s saw the exploitation boom, a rise in B-movies and grindhouse pictures. Objectively speaking, it is hard to say that The Clones of Bruce Lee, Blacula or Fräulein Devil are better than every single film made recently. Mr. Rajathurai also states that films of that era “were not about the special effects”, when films like The Poseidon Adventure, Star Wars, Superman, Close Encounters of the Third Kind, and Alien certainly are about the special effects, in addition to being modern classics.

Ultimately, I think it’s a case of comparing apples to apples. Sure, it might seem like every other new movie is a remake or a sequel, but high-quality films still get made today in addition to bad movies, just as in the late 60s and 70s.