Resurrecting the Dinosaurs: the special effects of Jurassic Park 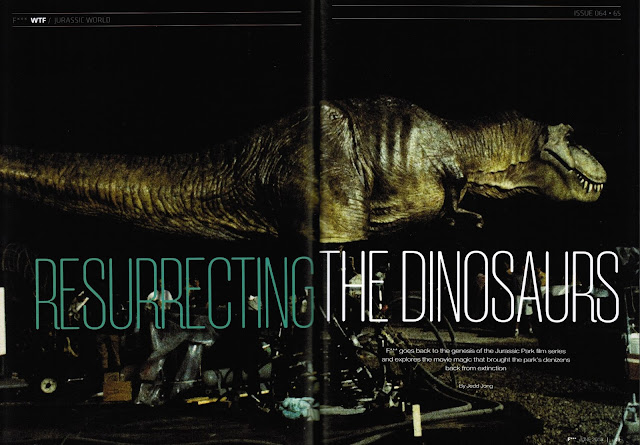 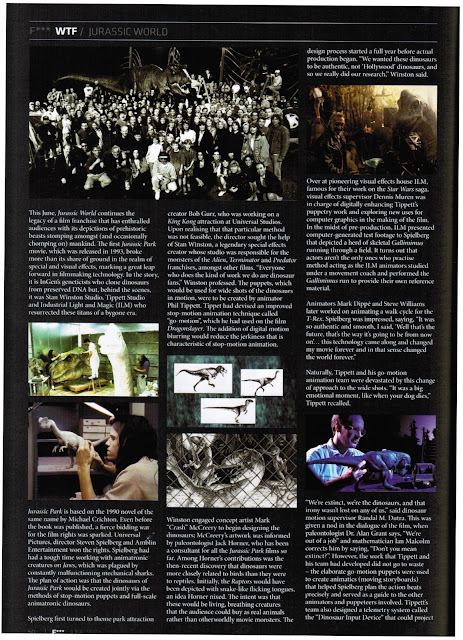 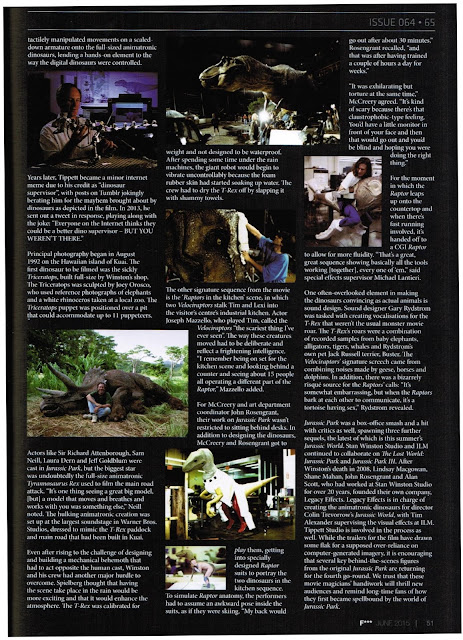 RESURRECTING THE DINOSAURS
F*** goes back to the genesis of the Jurassic Park film series and explores the movie magic that brought the park’s denizens back from extinction. 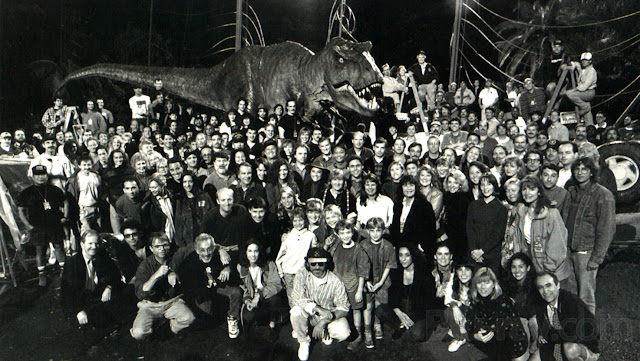 This June, Jurassic World continues the legacy of a film franchise that has enthralled audiences with its depictions of prehistoric beasts stomping among (and occasionally chomping on) mankind. The first Jurassic Park movie, which was released in 1993, broke more than its share of ground in the realm of special and visual effects that marked a great leap forward in filmmaking technology. In the story, it is InGen’s geneticists who clone dinosaurs from preserved DNA, but behind the scenes, it was Stan Winston Studio, Tippett Studio and Industrial Light and Magic (ILM) who resurrected these titans of a bygone era. 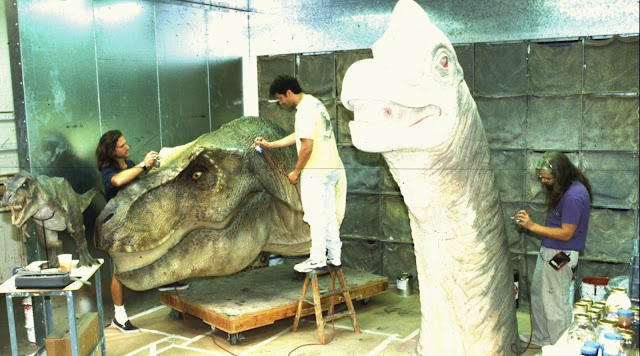 Jurassic Park is based on the 1990 novel of the same name by Michael Crichton. Even before the book was published, a fierce bidding war for the film rights was sparked. Universal Pictures, director Steven Spielberg and Amblin Entertainment won the rights. Spielberg had a tough time working with animatronic creatures on Jaws, which was plagued by constantly malfunctioning mechanical sharks. The plan of action was that the dinosaurs of Jurassic Park would be created with the joint methods of stop-motion puppets and full-scale animatronic dinosaurs. 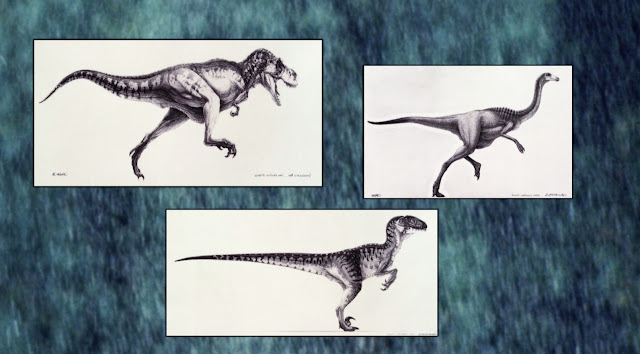 Spielberg first turned to theme park attraction creator Bob Gurr, who was working on a King Kong attraction at Universal Studios. Upon realising that particular method was infeasible, the director sought the help of Stan Winston, a legendary special effects creator whose studio was responsible for the monsters of the Alien, Terminator and Predator franchises, amongst other films. “Everyone who does the kind of work we do are dinosaur fans,” Winston professed. The puppets, which would be used for wide shots of the dinosaurs in motion, were to be created by animator Phil Tippett. Tippett had devised an improved stop-motion animation technique called “go-motion”, which he used on the film Dragonslayer. The addition of digital motion blurring would reduce the jerkiness that is characteristic of stop-motion animation. 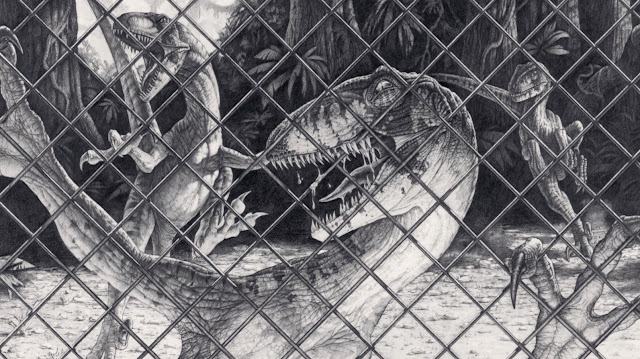 Winston engaged concept artist Mark “Crash” McCreery to begin designing the dinosaurs; McCreery’s artwork informed by palaeontologist Jack Horner, who has been a consultant for all the Jurassic Park films so far. Among Horner’s contributions was the then-recent discovery that dinosaurs were more closely related to birds than they were to reptiles. Initially, the Raptors would’ve been depicted with snake-like flicking tongues, an idea Horner nixed. The intent was that these would be living, breathing creatures that the audience could buy as real animals rather than otherworldly movie monsters. The design process started a full year before actual production began. “We wanted these dinosaurs to be authentic, not ‘Hollywood’ dinosaurs, and so we really did our research,” Winston said. 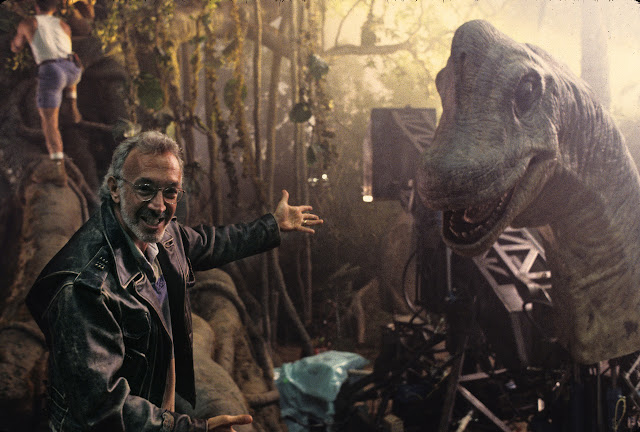 Over at pioneering visual effects house ILM, famous for their work on the Star Wars saga, visual effects supervisor Dennis Muren was in charge of digitally enhancing Tippett’s puppetry work and exploring new uses for computer graphics in the making of the film. In the midst of pre-production, ILM presented computer-generated test footage to Spielberg, which depicted a heard of skeletal Gallimimus running through a field. It turns out that actors aren’t the only ones who practice method acting as the ILM animators studied under a movement coach and performed the Gallimimus run to provide their own reference material.

Animators Mark Dippé and Steve Williams later worked on animating a walk cycle for the T-rex. Spielberg was impressed, saying “it was so authentic and smooth, I said ‘well that’s the future, that’s the way it’s going to be from now on’…this technology came along and changed my movie forever and in that sense changed the world forever.”

Naturally, Tippett and his go-motion animation team were devastated by this change of approach to the wide shots. “It was a big emotional moment, like when your dog dies,” Tippett recalled. 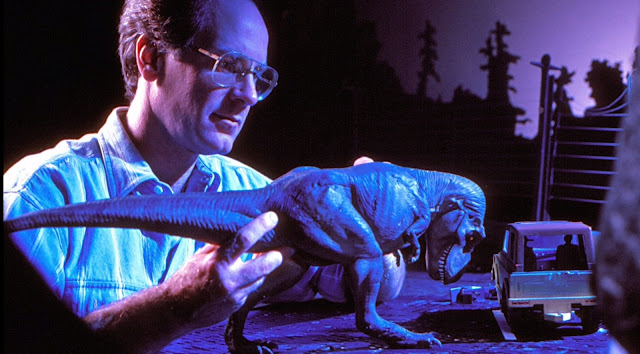 “We’re extinct, we’re the dinosaurs, and that irony wasn’t lost on any of us,” said dinosaur motion supervisor Randal M. Dutra. This was given a nod in the dialogue of the film, when palaeontologist Dr. Alan Grant says “we’re out of a job” and mathematician Ian Malcolm corrects him by saying “don’t you mean extinct?” However, the work that Tippett and his team had developed did not go to waste – the elaborate go-motion puppets were used to create animatics (moving storyboards) that helped Spielberg plan the action beats precisely and served as a guide to the other animators and puppeteers involved. Tippett’s team also designed a telemetry system called the “Dinosaur Input Device” that could project tactilely manipulated movements on a scaled-down armature onto the full-sized animatronic dinosaurs, lending a hands-on element to the way the digital dinosaurs were controlled. 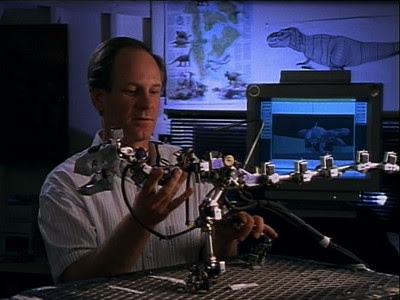 Years later, Tippett became a minor internet meme due to his credit as “dinosaur supervisor”, with posts on tumblr jokingly berating him for the mayhem brought about by dinosaurs as depicted in the film. In 2013, he sent out a tweet in response, playing along with the joke: “Everyone on the internet thinks they could be a better dino supervisor - BUT YOU WEREN'T THERE.”

Principal photography began in August 1992 on the Hawaiian island of Kuai. The first dinosaur to be filmed was the sickly Triceratops, built full-size by Winston’s shop. The Triceratops was sculpted by Joey Orosco, who used reference photographs of elephants and a white rhinoceros taken at a local zoo. The Triceratops puppet was positioned over a pit that could accommodate up to 11 puppeteers. 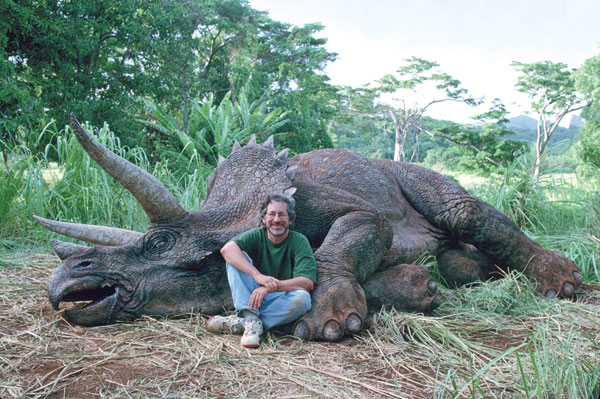 Prolific human actors like Sir Richard Attenborough, Sam Neill, Laura Dern and Jeff Goldblum were cast in Jurassic Park, but the biggest star was undoubtedly the full-size animatronic Tyrannosaurus rex used to film the main road attack. “It’s one thing seeing a great big model, [but] a model that moves and breathes and works with you was something else,” Neill noted. The hulking animatronic creation was set up at the largest soundstage in Warner Bros. Studios, dressed to mimic the T-rex paddock and main road that had been built in Kuai. 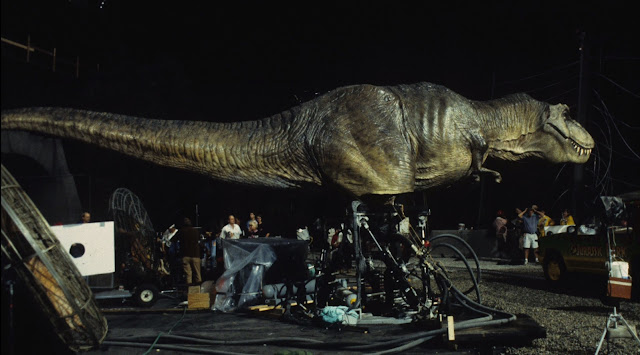 Even after being up to the task of designing and building a mechanical behemoth that had to act opposite the human cast, Winston and his crew had another major hurdle to overcome. Spielberg thought that having the scene take place in the rain would be more exciting and that it would enhance the atmosphere. The T-rex was calibrated for weight and not designed to be waterproof. After spending some time under the rain machines, the giant robot would begin to vibrate uncontrollably because the foam rubber skin had started soaking up water. The crew had to dry the T-rex off by slapping it with shammy towels. 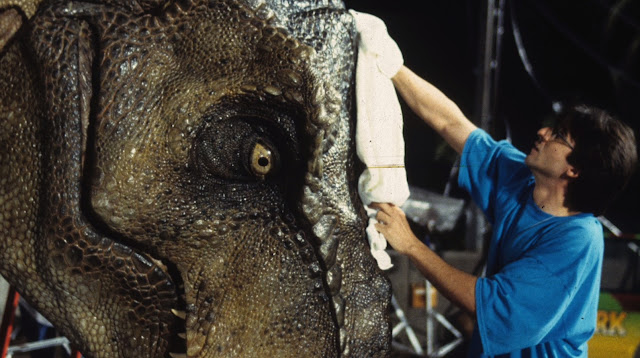 The other signature sequence from the movie is the “Raptors in the kitchen” scene, in which two Velociraptors stalk Tim and Lexi into the visitor’s centre’s industrial kitchen. Actor Joseph Mazzello, who played Tim, called the Velociraptors “the scariest thing I’ve ever seen.” The way these creatures moved had to be deliberate and reflect a frightening intelligence. “I remember being on set for the kitchen scene and looking behind a counter and seeing about 15 people all operating a different part of the Raptor,” Mazzello added. 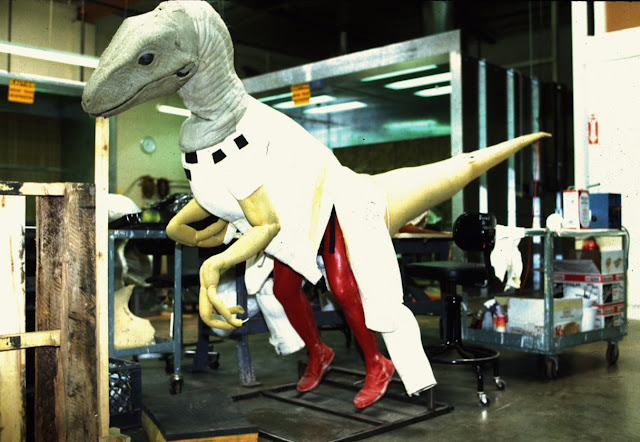 For McCreery and art department coordinator John Rosengrant, their work on Jurassic Park wasn’t restricted to sitting behind desks. In addition to designing the dinosaurs, McCreery and Rosengrant got to play them, getting into specially designed Raptor suits to portray the two dinosaurs in the kitchen sequence. To simulate Raptor anatomy, the performers had to assume an awkward pose inside the suits, as if they were skiing. “My back would go out after about 30 minutes,” Rosengrant recalled, “and that was after having trained a couple of hours a day for weeks.” 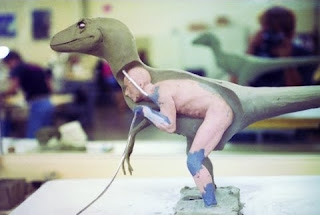 “It was exhilarating but torture at the same time,” McCreery agreed. “It’s kind of scary because there’s that claustrophobic-type feeling. You’d have a little monitor in front of your face and then that would go out and you’d be blind and hoping you were doing the right thing.”

For the moment in which the Raptor leaps up onto the countertop and when there’s fast running involved, it’s handed off to a CGI Raptor to allow for more fluidity. “That’s a great, great sequence showing basically all the tools working [together], every one of ‘em,” said special effects supervisor Michael Lantieri.

One often-overlooked element in making the dinosaurs convincing as actual animals is sound design. Sound designer Gary Rydstrom was tasked with creating vocalisations for the T-rex that weren’t the usual monster movie roar. The T-rex’s roars were a combination of recorded samples from baby elephants, alligators, tigers, whales, and Rydstrom’s own pet Jack Russell terrier, Buster. The Velociraptors’ signature screech came from combining noises from geese, horses and dolphins. In addition, there was a bizarrely risqué source for the Raptors’ calls: "It's somewhat embarrassing, but when the Raptors bark at each other to communicate, it's a tortoise having sex," Rydstrom revealed.

Jurassic Park was a box office smash and a hit with critics as well, spawning three further sequels, the latest of which is this summer’s Jurassic World. Stan Winston Studio and ILM continued to collaborate on The Lost World: Jurassic Park and Jurassic Park III. After Winston’s death in 2008, Lindsay Macgowan, Shane Mahan, John Rosengrant, and Alan Scott, who had worked at Stan Winston Studio for over 20 years, founded their own company, Legacy Effects. Legacy Effects is in charge of creating the animatronic dinosaurs for director Colin Trevorrow’s Jurassic World, with Tim Alexander supervising the visual effects at ILM. Tippett Studio is involved in the process as well. While the trailers for the film have drawn some flak for a supposed over-reliance on computer-generated imagery, it is encouraging that several key behind-the-scenes figures from the original Jurassic Park are returning for the fourth go-round. We trust that these movie magicians’ handiwork will thrill new audiences and remind long-time Jurassic Park fans of how they first became spellbound.