The Coen Brothers peel back the curtain on the turning cogs of the ‘50s Hollywood studio system machine in this comedy. Eddie Mannix (Brolin) is a fixer employed by Capitol Pictures, who has to ensure that celebrities’ dirty laundry remains in the hamper. When Baird Whitlock (Clooney), the star of the blockbuster Biblical epic Hail, Caesar!, is abducted, it’s up to Mannix to procure the $100 000 ransom and rescue the actor. Hobie Doyle (Ehrenreich), another one of Mannix’s clients, is a “singing cowboy” actor who is cast in a period drama helmed by prestigious director Laurence Laurentz (Fiennes) in the studio’s attempt to push him as a big star. He is drawn into Mannix’s mission to find Whitlock. Other figures working on the Capitol Pictures soundstages include actress/synchronised swimmer DeeAnna Moran (Johansson) and song-and-dance man Burt Gurney (Tatum), who harbours a dark secret. 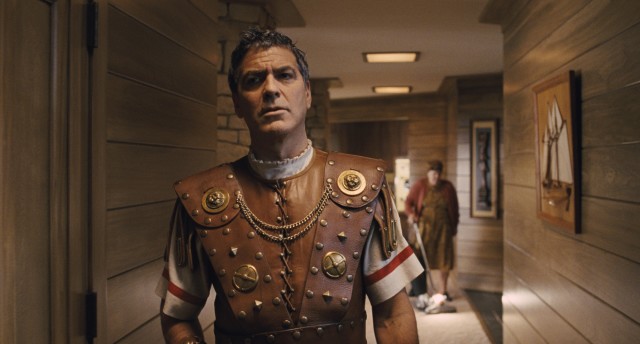 At the time of writing, Hail, Caesar! has an 82% score from film critics but only a 45% audience score on review aggregating site Rotten Tomatoes. The Coens’ tribute to 50s Hollywood is certainly geared towards cinephiles and packs in plenty of nostalgic period detail, with plenty of homages to the tropes and styles of that era’s moviemaking business. There’s a freewheeling frivolity to the film that might alienate those unfamiliar with the historical context in which the Hail, Caesar! is set. There are Easter Eggs and references galore, most of which were lost on this reviewer. In addition to drawing on the films of Old Hollywood, the Coens reference their own back catalogue: the fictional Capitol Pictures studio also featured in Barton Fink. 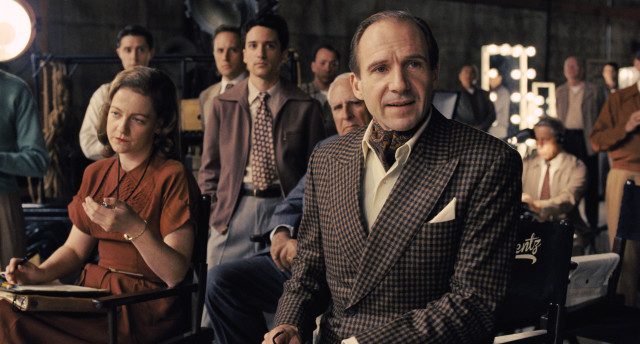 The Coens have written and directed some startlingly bleak black comedies, and in contrast, Hail, Caesar! is a frothy and frolicsome enterprise. By having the main character be a studio fixer, whose job it is to keep everyone in line and on brand, the Coens have the opportunity to satirise the iron grip the Old Hollywood studio system had on its contract stars. We do get some of that, to be sure, but the film favours silliness over bite at every turn. 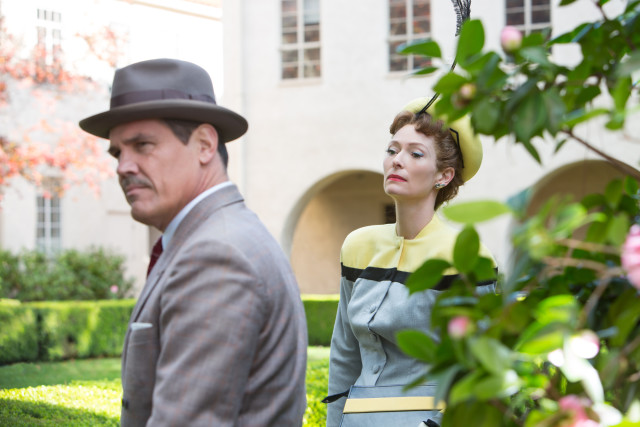 Because of the clout the Coens have built up over their career, they have access to some big names and many of the cast members in Hail, Caesar! are returning Coen Brothers alumni. Eddie Mannix is a fictionalisation of the real-life Hollywood fixer-turned producer of the same name. Brolin captures the character’s strong work ethic and is a reliable straight man of the “comically serious” variety, trudging through the over-the-top shenanigans that occur throughout the film. In O Brother, Where Art Thou?, Intolerable Cruelty and Hail, Caesar!, Clooney plays characters who aren’t too bright, forming the so-called “numbskull trilogy”. Here, Clooney’s Baird Whitlock is modelled after Kirk Douglas; his character in the film-within-a-film being a Roman centurion who is eventually moved by the power of Jesus Christ. Clooney’s lackadaisical charm shines through; Clooney clearly very comfortable working with the Coens. 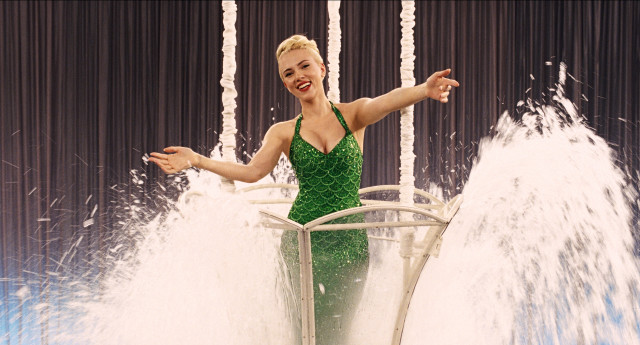 A selection of famous faces pop up in extended cameos that could be described as “gratuitous” if one isn’t in a particularly charitable mood – but we’ll be darned if the casting isn’t spot on. Swinton hams it up in a dual role as rival gossip columnists who happen to be twin sisters. Coens oft-collaborator Frances McDormand is a film editor who has a scarf-related mishap and Jonah Hill shows up as a surety agent. Johansson plays an Esther Williams-esque actress and participates in a lavishly choreographed synchronised swimming sequence. Her character is perceived as sweet and elegant, when she’s actually a surly, irascible chain-smoker. Tatum is absolutely hilarious here, while also getting to show off some very fancy footwork in a tap dance number that’s a tribute to Gene Kelly. Ehrenreich may not be as well-known as his co-stars, but he’s plenty likeable as the unrefined singing cowboy who has his life taken over by the studio. 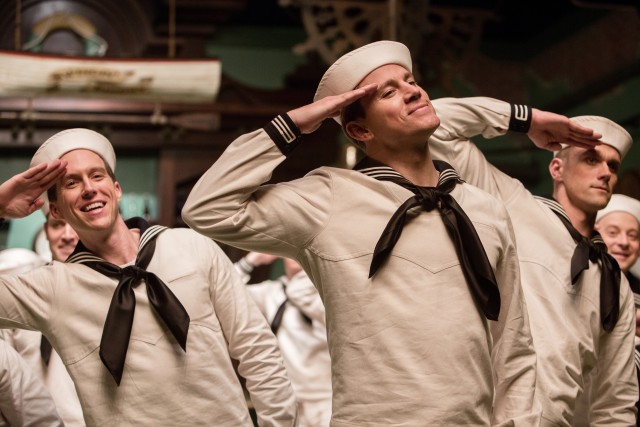 Hail, Caesar! is plenty of very broadly played fun and is sure to appeal to viewers who have an affinity with the movies of 50s Hollywood and the behind-the-scenes gossip that came with them. Alas, it’s far from the Coens’ sharpest material and there are instances where they seem to be caught up in the minutiae and get a little carried away with their elaborate odes to this bygone era of filmmaking. This can be viewed as something of a companion piece to Trumbo, set against the same political climate in Hollywood but played straight, natch. If it’s nostalgia, whimsy and a couple of intricately staged musical numbers that you’re after, the Coens have got you covered.

Summary: A light-hearted romp through 50s Hollywood, Hail, Caesar! is packed with loving homages but does play a little too “inside baseball” for non-initiates to get into.

Jedd Jong
Posted by Jedd the Jedi at 5:38 AM