The rotund, ever-enthusiastic harbinger of awesomeness himself, Po (Black) the Dragon Warrior, has returned to deliver swift justice and wolf down dumplings in the third instalment of the Kung Fu Panda series. The fiendish spirit warrior Kai (Simmons), who formerly fought alongside Master Oogway (Kim), is intent on capturing the chi of all the kung fu masters throughout the land, imprisoning them within jade amulets. In the meantime, Master Shifu (Hoffman) announces his retirement and tasks Po with training the Furious Five, comprising Tigress (Jolie), Viper (Liu), Monkey (Chan), Mantis (Rogen) and Crane (Cross). While Po struggles with his new responsibilities, his biological father Li Shan (Cranston) arrives to take his long-lost son to a secret panda village. This incites the jealousy of Po’s adoptive father Mr. Ping (Hong). When Kai has his sights set on the panda village, Po must transform his ungainly kin into a fearsome army to defeat their powerful foe.

It can be said that 2008’s Kung Fu Panda was something of a turning point for Dreamworks Animation, eschewing excessive popular culture references (but still keeping an all-star voice cast) in favour of something more character-driven, drawing upon Chinese culture for design and story elements. Kung Fu Panda 3 retains much of what made the first two films appealing: it’s breath-taking to look at, the characters are loveable and it’s heartfelt. However, true poignancy seems just out of the movie’s grasp, and the philosophy being dispensed doesn’t go much deeper than “believe in yourself”. Also, even though the stakes seem pretty high, with an immortal villain going after all the kung fu masters in the land, the sense of devastation is insufficient. These films have to strike a balance between depicting battles against evil and kid-friendly goofing off. The scales are ever so slightly uneven here.

What’s great about Po is there are still lessons for him to learn and challenges for him to conquer; he might have come a long way but there’s still a distance to go yet. This film delves into Po’s crisis of identity: he’s been raised by a goose his whole life, but then his actual dad enters stage left and introduces him to a whole village of pandas he’s never known. What does this make Po? It’s roly-poly slapstick first and depth second, but it counts for something that the filmmakers have figured out a way to keep Po’s character from reaching a comfortable plateau. Black wears the role like a second skin and Po’s earnestness, fanboy attitude and moments of self-doubt are traits many viewers identify with.

Kai has all the makings of a formidable villain, but something’s missing and this reviewer can’t quite pinpoint what. As the series’ first supernatural baddie, he’s easily the most powerful of the foes Po and company have faced off against. Simmons does a decent gruff bellow and the character design is physically imposing. In terms of impact, he is perhaps on par with Tai Lung from the first film but lacks the almost unsettling menace of Kung Fu Panda 2’s Lord Shen. His motivations are also significantly less developed than those of the afore-mentioned previous antagonists. 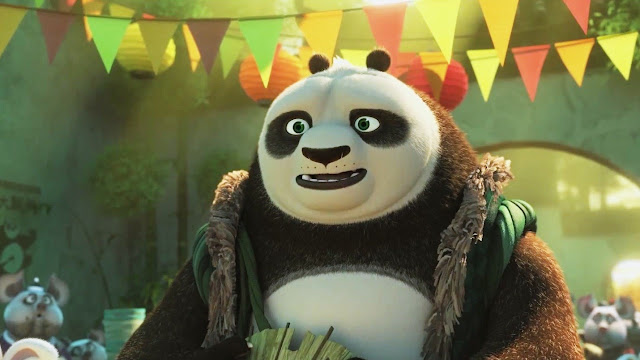 Cranston contributes an affable warmth to the part of Li Shan, with a “dopey dad” vibe that brings to mind his role as Hal in Malcolm in the Middle. The conflict between Po’s two dads seems like a stronger driving force for the story than the oncoming threat of Kai’s attacks. Ping’s initial suspicion of Li Shan and how he comes to terms with the fact that Po’s biological father is back in his life is both funny and touching, giving Hong a little more to do than just be the fussbudget. Of the Furious Five, Jolie’s Tigress gets the most screen time and the team’s resident stoic gets to show a little bit of a soft side as she bonds with a little panda girl. It seems like Mei Mei, a panda who has amorous designs on Po, was originally given more to do in the story. As it stands, the character is largely inconsequential. Perhaps it stems from the re-casting of the role, with Rebel Wilson replaced by Kate Hudson due to scheduling conflicts.

The martial arts sequences choreographed by animator Randolph Guenoden continue to be outstanding and a portion of the film takes place in the Chinese spirit realm, which changes the look up a little. There are a number of specific lines and jokes that are direct call-backs to the first two movies, which should make watching all three back-to-back somewhat rewarding. As far as we’re concerned, the franchise has yet to outstay its welcome, but Kung Fu Panda 3 shows signs of why one might be worried.

Summary: Kung Fu Panda 3 is spectacularly animated and gives Po more character development, but its underwhelming villain and emotional arcs that show promise but fall short of sublime are a bit of a disappointment.