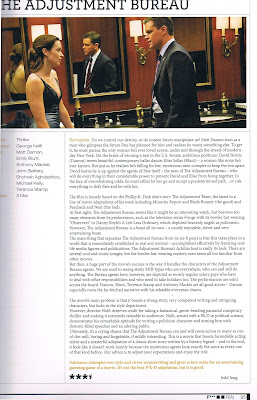 A topic of discussion that often pops up when philosophy is the subject is that of fate – do we believe that we are solely in control of our lives, or that every move we make has been planned, pre-destined by some sort of higher power or sinister underlying force? A lot of this does sound like pretentious dribble, and films that try to address it often end up as the same – but this one, this one is a wee bit different.

The film is loosely based on the Philip K. Dick short story The Adjustment Team. Dick numbers amount the authors who have had the most number of films based on their books and stories. Alas, the man passed away just several months shy of the release of the first one, the seminal classic Blade Runner. Unfortunately, the qualities of these adaptations vary vastly (who can forgive Paycheck, Next or Impostor?), and Blade Runner is often regarded as the best, with Spielberg’s Minority Report a close runner-up.

Matt Damon plays David Norris, a young, up-and-coming New York politician running for Senate. He is loved by all, until an embarrassing photograph comes to light, published in the New York Post. His numbers fall and he is crushed. Before making his “defeat speech” to concede to the other candidate, he bumps into Elise (Blunt), a slightly kooky but friendly and beautiful dancer. The next day, by sheer coincidence, he meets her again on the bus.

He is immediately enamoured with the girl, but his life is suddenly turned upside-down by the eponymous Bureau: strange, mysterious men, unclassifiable but for the sake of explanation something like half-angels, half-CIA covert-ops spooks. They seem omniscient but blend into the background, and are all identically dressed in grey suits and a bowler hat. They tell Norris that he was never meant to meet her a second time, and to never meet her again, or the “plan” will fall apart. But Norris is smitten, and proves he will defy anything or anyone to be reunited with Elise – even an all-powerful secret organization.

At first sight, The Adjustment Bureau seems like it might be an interesting watch, but borrows too many elements from its predecessors, such as the television series Fringe with its bowler hat-wearing “Observers” or Danny Boyle’s A Life Less Ordinary, which depicted heavenly angels as policemen. However, The Adjustment Bureau is a beast all its own – a mostly enjoyable, clever and very entertaining beast.

The main thing that separates The Adjustment Bureau from most films based on P-K-D source material is that this takes place in the present, in a world that is immediately established as real and normal – accomplished effectively by having media figures such as Jon Stewart and Wolf Blitzer appear as themselves, and by putting Norris’ face in publications such as GQ and the New York Post. In a way, this is much like the montage in Iron Man, which showed publications that had featured Tony Stark in the past, including Wired, Esquire and Time. Mainly because of this, The Adjustment Bureau shares a very similar tone to that of Iron Man – it takes place in a world almost exactly like ours, only with a large helping of fantastical, super-high-tech or maybe even supernatural gravy.

The Adjustment Bureau’s Achilles heel is really its look. There are several cool and iconic images, and the “planner diaries” that the Adjusters use are literal E-books, normal bound paper notebooks except displaying complex computerized “decision trees”, tracking the effect of every move the subject makes. However, many may form expectations of the film based on the image of the mysterious men in suits and hats, just as I did.

I was quite wrong – a huge part of the movie’s success is the way it handles the characters of the Adjustment Bureau agents. We are used to seeing cold, emotionless and robotic Men-In-Black types, who are everywhere; who can and will do anything. The Bureau agents here however are depicted as mostly regular company men – regular salary guys who have to deal with office politicking and back-biting, meeting deadlines and fulfilling responsibilities, and who need to take holidays too.

The performances are very solid across the board. Matt Damon is an excellent actor whose specialty is playing the normal, everyday guy with a special talent, gift or skill. Therefore, he is the right choice to play an idealised, almost-perfect Congressman whom everyone immediately loves, and who is genuinely a good man through and through. Emily Blunt is, like Damon, also considered one of the best talents in the industry at the moment. She plays a ballerina, but unlike in Black Swan, she’s mostly a dream girl – quick-witted, intelligent, a tiny bit on the eccentric side and dedicated to her craft.

There are very few successful films with no real, solid villain – Forrest Gump is the example that quickly comes to mind. The Adjustment Bureau agents seem sinister, but as we get to know them better we learn they’re just doing their jobs. However, along comes senior agent Thompson (Terence Stamp doing what he does best), cold, dangerously effective and amoral. Anthony Mackie, again a rising star with a solid pedigree (best known as Sgt. Sanborn in The Hurt Locker and as the late rap superstar Tupac Shakur in Notorious) puts in marvellous work as Harry; a supporting character who first clues us in to the fact that the Bureau’s agents have the capacity to be scrupulous and some may even have grown a conscience.

The movie’s main problem is the opposite of that that has plagued a good number of recent blockbusters – it boasts a strong story, very competent writing and intriguing characters, but lacks in the style department. This is a pity as writer/director George Nolfi, co-screenwriter on The Bourne Ultimatum (also a Damon-starring film) and first-time director, has a nose for a good story. The film’s story departs a fair bit from the source material, but so did all the other P-K-D story-based movies – except here, like in Minority Report, it is a wise change of context that makes it a good watch.

The biggest credit that Nolfi, the filmmakers and the cast deserve is that they took a fantastical, genre-bending paranoid conspiracy thriller and made it extremely relatable to audiences. The dialogue between Elise and David is natural, witty and most of it sounds a lot like how real couples would speak – it was as if Nolfi wrote David’s lines, and his wife/girlfriend wrote Elise’s. Nolfi, armed with a Ph.D in political science, also demonstrates his remarkable aptitude for writing a politician character and arming him with rhetoric-filled speeches and an adoring public.

Ultimately, it’s a crying shame that The Adjustment Bureau can and will come off to many as run-of-the-mill, boring and forgettable, if mildly interesting. This is a movie that boasts formidable acting talent and a masterful adaptation of a classic short story written by a literary legend – and in the end, it feels like it doesn’t work mainly because the mysterious agents look exactly the same as every one of that kind before. This is actually a good film, and my main advice is to adjust your expectations and enjoy the ride.