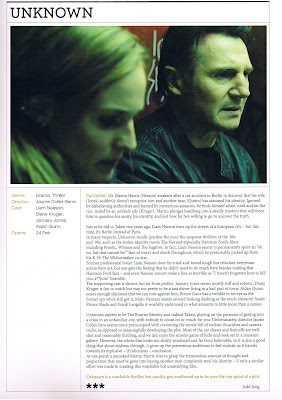 It is Oscar season, the time of year when sophisticated, high-brow and complex films are the talk of the town. It is human nature to rebel, and it felt good to eschew such thinking man’s fare in favour of watching Liam Neeson tear up the streets of a European city, as he did in Taken around two years earlier.

This time, it’s Berlin instead of Paris. Neeson plays botanist Martin Harris, who has taken his wife Liz (Jones) along with him to attend a major biotechnology conference in the city. However, on the way back to the airport to reclaim a briefcase he left behind, Harris’ taxi plunges into the river, and he awakes from a coma four days later in the hospital.

Harris checks himself out of the hospital to find his wife, but is shocked to discover that she apparently doesn’t recognise him, and another man (Aidan Quinn) has taken his place, pretending to be Martin Harris. The real Martin is shocked and outraged, and everyone else is convinced that not all his dogs are barking.

He struggles to prove his identity and his sanity, seeking help from whoever he can – including the taxi driver who was at the wheel when the accident occurred (Kruger), an elderly former Stasi agent active during the Cold War (Bruno Ganz) and Rodney Cole (Frank Langella), Martin’s oldest friend. At the same time, he must escape pursuit from deadly and mysterious agents, and uncover a horrific conspiracy.

In many respects, Unknown recalls (pardon the pun) the suspense thrillers of the 80s and 90s, such as the stolen-identity techno-thriller The Net and especially Harrison Ford films including Frantic, Witness and The Fugitive – and I’m a big fan of all three of those. In fact, Liam Neeson seems to permanently sport an “oh no, but that cannot be!” face of worry and shock , which he most likely learned from his K-19: The Widowmaker co-star.

Neeson has carved a career out of playing mentors (such as in Star Wars Episode I: The Phantom Menace, Kingdom of Heaven, Krull and Batman Begins), but also as the flawed, tough and sometimes reluctant everyman action hero (see Darkman, biopics Rob Roy and Michael Collins, boxing film The Big Man and the afore-mentioned Taken). It is the latter which he marshals for Unknown, but one gets the feeling that Neeson didn’t need to do much here besides making that Harrison Ford face – and even he cannot make a line as cringe-inducing as “I haven’t forgotten how to kill you, asshole” bearable.

The supporting cast is hit-and-miss: decent, but far from perfect. Mannequin-like beauty January Jones seems mostly stiff and robotic, Diane Kruger running about her native Germany is fun to watch but she’s way too pretty to be a taxi driver (or anything other than a model, really) living in a bad part of town, Aidan Quinn oozes enough sliminess that we can root against him, Bruno Ganz has a twinkle in his eye as the former spy who’s still got it, Mido Hamaza stands around looking dashing as the stock-character Saudi Prince Shada and Frank Langella is woefully underused in what amounts to little more than a cameo.

Unknown works serviceably as a semi-old-fashioned action thriller and it aspires to be The Bourne Identity and indeed Taken, playing on the paranoia of getting into a crisis in an unfamiliar city, with nobody to count on or vouch for you. However, director Jaume Collet-Serra seems more preoccupied with cramming the movie full of stylistic flourishes, including (but not limited to) slow-motion shots, whip pans and Dutch tilts and sepia-toned flashbacks, as opposed to meaningfully developing the plot.

Most of the action sequences in the film are well-shot and the car chases and fisticuffs are reasonably thrilling - of special note is a sinister game of hide-and-seek set in a museum gallery. However, the whole film looks a little too slickly-produced and Hollywood-shiny, and even scenes set in back alleys, ramshackle apartments and a smoky dance club barely look sufficiently gritty and are therefore not believable. It is a good thing then that about midway through, the film gives up it pretentious ambitions to feel realistic as it barrels towards its explosive-if-ridiculous conclusion.

Jedd Jong
Posted by Jedd the Jedi at 2:54 AM