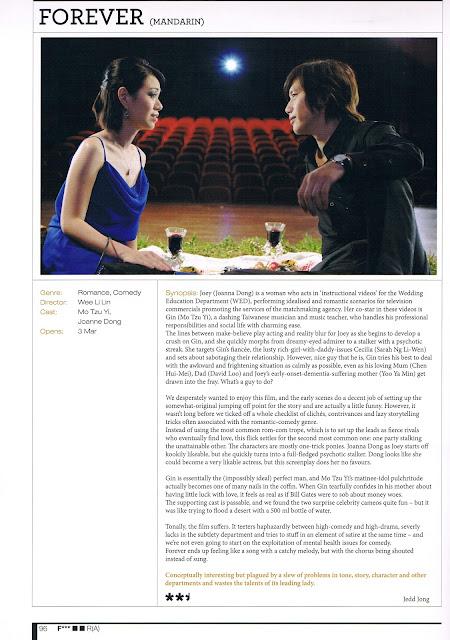 
Everyone’s heard of the phrase “Always a bridesmaid but never a bride”. This Chinese-language, Singapore-made romantic-comedy attempts to tell the tale of a woman who is “always a bride”, but also “never the bride”. It’s an interesting place to start – but be warned, this movie doesn’t turn out to be all champagne, bouquets and diamond rings.

Joey (Dong) is a woman who acts in “instructional videos” for the Wedding Education Department (WED), performing idealised and romantic scenarios for television commercials promoting the services of the matchmaking agency. Her co-star in these videos is Gin (Mo), a dashing Taiwanese musician and music teacher, who handles his professional responsibilities and social life with charming ease.

The lines between make-believe play acting and reality blur for Joey as she begins to develop a crush on Gin, and as she quickly unravels, morphing from dreamy-eyed admirer to a stalker with a psychotic streak. She quickly targets Gin’s fiancée, the lusty rich-girl-with-daddy-issues Cecilia (Ng Li-Wen) and sets about sabotaging their relationship. However, nice guy that he is, Gin tries his best to deal with the awkward and frightening situation as calmly as possible, even as his loving Mum (Chen Hui-Mei), Dad (David Loo) and Joey’s early-onset-dementia-suffering mother (Yoo Ya Min) get drawn into the fray. What’s a guy to do?

I desperately wanted to enjoy this film, and the early scenes do a decent job of setting up the somewhat-original jumping off point for the story. The bureaucratic nature of the WED organization makes for a few good chuckles, with their slogans such as “Loneliness kills; WED saves”, advising men to turn up their collars as it looks more attractive, and their use of facial recognition software to determine the compatibility of two would-be partners relatively amusing.

However, it’s not long before one quickly ticks off a whole checklist of clichés, contrivances and lazy storytelling tricks often associated with the romantic-comedy genre. The bland and generic translated title of the film should have been my first clue – the original Mandarin title translates directly to ILoveYouLoveYouLoveYou, which, silly as it sounds, works better than Forever. The film quickly drifts farther and farther away from the Democratic Republic of the Plausible, towards the Island of the Ridiculous – and when this reviewer wanted to stop following that boat and swim back, it was too late, and the savage inhabitants of the Island of the Ridiculous were hungry and waiting.

Instead of using the most common rom-com trope, which is to set up the leads as fierce rivals and have them quickly fall for each other, this flick settles for the second most common one: one party obsessed and starry-eyed, the other cool and unattainable, set on a collision course with a speed bump in the form of a third party standing in the way.

The characters are all decidedly flat and one note. At first, female lead and former Singapore Idol contestant Joanna Dong seems to be channeling the kooky sweetheart vibe defined by such stars as Meg Ryan, Sandra Bullock and Julia Roberts. However, she quickly leaps right off the deep end, making the odd, peculiar and creepily desperate antics of Sandra Bullock’s character in the awful All About Steve look positively restrained. Even that film had the line "If you love someone, set him free; if you have to stalk him, he probably wasn't yours in the first place" – a concept that Joey does not understand, and probably never will.

Keeping a stash of Gin’s childhood photographs, creating fantasy PowerPoint presentations for her “wedding” with him, squealing “Iloveyouloveyouloveyou!” into the phone, indulging in idealised and preposterous fantasies of their would-be romance, enacting a gender-flipped Romeo-and-Juliet-style balcony scene outside his house and enlisting the help of Gin’s bewildered chamber music students to help her woo him number among Joey’s wacko manifestations. I’m glad that an axe didn’t somehow wander into frame, because Joey did look like she was intent on having Gin “fall to pieces” in more ways than one. It’s a pity as Dong shows potential as a likable actress, but the screenplay does her no favours.

Gin is essentially the perfect man: kind, thoughtful, intelligent, romantic, musical, great with kids, and the son of nice parents – not to mention very handsome. Taiwanese actor-singer Mo Tzu Yi’s matinee-idol pulchritude actually becomes one of many nails in the coffin for the movie– one needs only remember that Charlize Theron won her Oscar for playing a real-life serial killer in Monster, and not for playing the eponymous futuristic, sexy secret agent in Æon Flux. Mo valiantly attempts to muster up all the comedic timing he possesses, but the character of Gin doesn’t end up being the composed yang to Joey’s crazy yin – he just ends up being stiff. When Gin tearfully confides in his mother that he’s never been lucky in love, it feels as real as if Bill Gates were to sob about money woes.

The supporting cast provides more laughs than both leads combined, really. Model and first-time film actress Sarah Ng Li-Wen inhabits the role of the sexy, wild and whiny Cecilia with much aplomb, even though the script gives her nothing really to do. Chen Hui-Mei and David Loo, as Gin’s parents, actually steal the show. Loo is a hoot as the good-natured but cantankerous dad, at one point likening the taste of Pandan cake to “coconut-flavoured toothpaste”, and plays off Chen, the sole source of any emotion in the picture, pretty well.

The kids in Gin’s chamber music class provide the only semblance of believability, Kenny Gee (unrelated to the saxophonist) is mildly amusing as a Goth-obsessed, rival wedding videographer, and there are surprise cameos from “controversial” pageant princess Ris Low and pre-eminent theatre doyen Dr KK Seet – but all this is like trying to flood a desert with a 500 ml bottle of mineral water.

Tonally, the film suffers. It’s nowhere near as bad as in much of Jack Neo’s work – there was a scene where a character attempts suicide in the middle of his otherwise cheesy and over-the-top comedy I Do I Do – but it is still unable to find a footing. It teeters haphazardly between high-comedy and high-drama and tries to stuff in an element of satire at the same time. When complemented by Director of Photography Gerard Stahlmann’s slow dolly shots, soft focus-filled idyllic fairytale vision of Singapore, it is a very disorienting experience. The film is also smug, employing visual gags such as parallel messages on a graffiti wall and on a banner hanging in the WED office, but none of it really works. I’m not even going to start on the exploitation of mental health issues for comedy.

Watching these films is a dangerous experience – I was running and trying to avoid the anvils falling from the sky. Subtlety seems like a foreign concept, and Forever ends up feeling like a song with a catchy melody, but with the chorus shouted instead of sung. Yes, the film is definitely not completely awful – watching it felt less like a painful eye infection, and more like a skin rash. It is marginally better than most entries in the increasingly-less-funny stable of romantic comedies from both Hollywood and the local scene, but in the end is more apt as a description of what cringing through the movie felt like, than as its title.