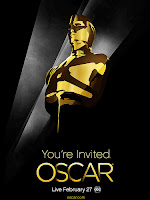 At the grand old age of 83, Grandpa Oscar is getting on in years. The hired entertainment at Grandpa Oscar’s birthday last year were two actors who, while both funny, were indeed catching up to Gramps. This was, perhaps, the reason that there wasn’t as big a turnout to Grandpa Oscar’s celebration as his family would’ve liked.

So, in an effort to help Grandpa Oscar keep up with the times and perhaps turn in his Model T Ford for in favour of a Ford Focus, we have younger blood. This year’s ceremony continued the trend of having two hosts, and I’ll say it was done much better this year. Anne Hathaway and James Franco are both extremely likable, and can match each other in comic timing and pulchritude. However, it was plain to see that Hathaway’s hyperactive antics were compensating for Franco’s “I’d-rather-cut-off-my-own-arm” demeanour that couldn’t help but leak through sometimes.

This year’s Academy Awards ceremony, for me, struck a good balance – it didn’t veer too far from the formula (when doing so had previously proved ill-advised at times), it embraced old Hollywood glamour, but added a fine contemporary touch. It was, as if The King’s Speech met The Social Network.

But just as Geoffrey Rush and Jesse Eisenberg would seem odd bedfellows (a hundred apologies for planting that mental image in your head), it wasn’t easy pulling this one off. Many would say the ceremony was too saccharine, a good-natured and respectful atmosphere established from the start, with many an acceptance speech including a heartfelt anecdotal thanks to the recipients’ mothers.

However bad aspartame may taste, I would prefer it over no sweetening at all.
The stage design easily evoked the days of Tinsletown yore, with basic proscenium arches reminiscent of the Hollywood Bowl. An added touch was that each of the arcs also functioned as projection screens – helping to add an interesting atmospheric effect to the standard video tributes to classic/landmark films. A computer-simulated Bob Hope spouted some of his famously funny lines, before introducing presenters Jude Law and Robert Downey Jr for the Achievement in Visual Effects category, for example.

Hathaway and Franco were more goofball chums than screwball romantic partners and Hathaway saved the day despite looking like she had one intravenous caffeine shot too many. The opening sequence echoed those Billy Crystal employed in the past, and kicked the show off on a fantastic note. The two hosts, with help from Inception’s Leonardo DiCaprio, enter the dreams of Alec Baldwin (one-half of last year’s tag-team) to steal tips on how to host – and along the way find themselves in the worlds of Best Picture nominees including True Grit, Black Swan and The King’s Speech – Hathaway quick to remind her audience in Second-World-War era England that microphones in the future will get smaller. And then, Billy Crystal turns up for all of three minutes, completely stealing the younger hosts’ thunder. It feels as if all the material was great - it just was too much for Hathaway and Franco to juggle.

In stark contrast to Ricky Gervais’ limits-testing turn as Golden Globes host, Hathaway and Franco stayed mostly respectable and well-behaved even as they worked in some hilarious soundbites – more like a frosty malt than Gervais’ sour grapefruit juice (yet another horrific mental image for the bank) Hathaway bemoaning that she was not nominated for an Oscar even though she had appeared nude (in Love and Other Drugs). The craziest that things got was Franco cross-dressing, wondering about the calls he received from Charlie Sheen earlier in the evening.

Like the rest of that night’s ceremony, the results were mostly sponge cake, but with a sprinkle of cinnamon sugar when needed – the crowd was definitely glad that Christian Bale and Natalie Portman both took home their much-deserved little bald statuettes.
It’s no secret that the Academy often snubs big-budget blockbuster epics, even when they do merit attention. While Inception was passed over for best original screenplay (director Christopher Nolan not even getting a Best Director nomination), it received a good number of technical achievement awards.

In several categories, it seemed as if The King’s Speech was neck-and-neck with The Social Network. But the Academy voters clicked the “like” buttons on the British film’s page instead, stealing the thunder with Tom Hooper snagging best director, Colin Firth for best actor and of course winning Best Picture. The Social Network was able to squeeze in Best Adapted Screenplay, best film editing and best original score edgewise – all (particularly for Aaron Sorkin’s blisteringly clever script) all well-deserved.

The jaded would bemoan the packaged and manufactured nature of the evening’s proceedings (Celine Dion singing Chaplin’s Smile for the emotional “In Memoriam” segment should be proof enough), but I really enjoyed the ceremony – mostly because it wasn’t so much a ceremony as a college reunion of sorts. Nods were given to the old, as glances thrown forwards at the new –and I actually didn’t find one moment boring.

So, while Grandpa Oscar’s hybrid vintage-modern speedster/sedan may draw some funny looks – and sometimes it works, while at others it doesn’t.

Postscript: I'm sorry that I haven't been posting more reviews and articles. It's not that I've not been watching movies - on the contrary, Royston Loh, the editor of F*** magazine, very kindly offered me some writing assignments. It's not a paying job, but I'm so excited. When the reviews are published in the magazine, I'll be able to put them up here. Look forward to reviews of Unknown, The Adjustment Bureau, Morning Glory and the Singaporean film Forever.
Posted by Jedd the Jedi at 4:03 AM