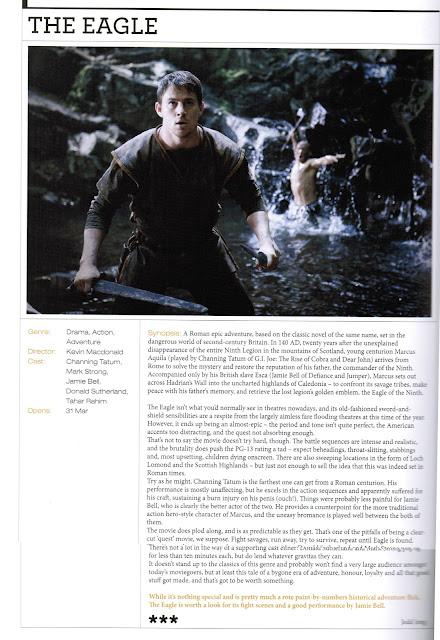 Having played American soldiers in Dear John and GI Joe: the Rise of Cobra, Channing Tatum now adds Roman centurion to his résumé. In this adaptation of Rosemary Sutcliff’s classic young adult novel The Eagle of the Ninth, Tatum plays Marcus Aquila, a young centurion whose father mysteriously disappeared in battle, along with 5000 men and the titular Eagle standard. With his servant Esca (Bell), Marcus sets off to reclaim the Eagle and restore honour to his family’s name.

The Eagle isn’t what you’d normally see in theatres nowadays, and its old-fashioned sword-and-shield sensibilities are respite from the largely aimless fare flooding theatres at this time of the year. However, it ends up being an almost-epic – the period and tone isn’t quite perfect, the American accents too distracting, and the quest not absorbing enough.

That’s not to say the movie doesn’t try hard, though. The battle sequences are intense and realistic, and the brutality does push the PG-13 rating a tad – expect beheadings, throat-slitting, stabbings and most upsetting, children dying onscreen. There are also sweeping locations in the form of Loch Lomond and the Scottish Highlands – but just not enough to sell the idea that this was indeed set in Roman times.

Try as he might, Channing Tatum is the farthest one can get from a Roman centurion. His performance is mostly unaffecting, but he excels in the action sequences and apparently suffered for his craft, sustaining a burn injury on his penis. Things were probably less painful for Jamie Bell, who is clearly the better actor of the two. As the slave rescued from the gladiatorial arena by Marcus, he provides a counterpoint for the more traditional action hero-style character of Marcus, and the uneasy bromance is played well between them both.

The movie does plod along, and is as predictable as they get. That’s one of the pitfalls of being a clear-cut “quest” movie, I suppose. Fight savages, run away, try to survive, repeat until Eagle is found. There’s not a lot in the way of a supporting cast either: Donald Sutherland and Mark Strong pop up for less than ten minutes respectively, but do lend whatever gravitas they can.

It doesn’t stand up to the classics of this genre and probably won’t find a very large audience amongst today’s moviegoers, but at least this tale of a bygone era of adventure, honour, loyalty and all that good stuff got made, and that’s got to be worth something.