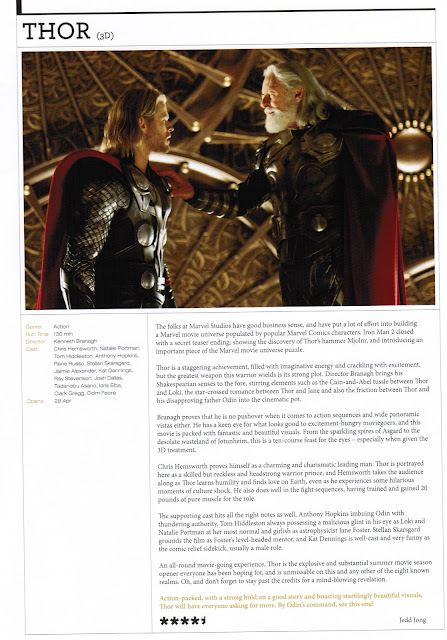 The folks at Marvel Studios have good business sense, and have put a lot of effort into building a Marvel movie universe populated by popular Marvel Comics characters. Iron Man 2 closed with a secret teaser ending, showing the discovery of Thor’s hammer Mjolnr, and introducing an important piece of the Marvel movie universe puzzle.

Thor is a staggering achievement, filled with imaginative energy and crackling with excitement, but the greatest weapon this warrior wields is its strong plot. Director Branagh brings his Shakespearian senses to the fore, stirring elements such as the Cain-and-Abel tussle between Thor and Loki, the star-crossed romance between Thor and Jane and also the friction between Thor and his disapproving father Odin into the cinematic pot.

Branagh proves that he is no pushover when it comes to action sequences and wide panoramic vistas either. He has a keen eye for what looks good to excitement-hungry moviegoers, and this movie is packed with fantastic and beautiful visuals. From the sparkling spires of Asgard to the desolate wasteland of Jotunheim, this is a ten-course feast for the eyes – especially when given the 3D treatment.

Chris Hemsworth proves himself as a charming and charismatic leading man. Thor is portrayed here as a skilled but reckless and headstrong warrior prince, and Hemsworth takes the audience along as Thor learns humility and finds love on Earth, even as he experiences some hilarious moments of culture shock. He also does well in the fight sequences, having trained and gained 20 pounds of pure muscle for the role.

The supporting cast hits all the right notes as well, Anthony Hopkins imbuing Odin with thundering authority, Tom Hiddleston always possessing a malicious glint in his eye as Loki and Natalie Portman at her most normal and girlish as astrophysicist Jane Foster. Stellan Skarsgard grounds the film as Foster’s level-headed mentor, and Kat Dennings is well-cast and very funny as the comic relief sidekick, usually a male role.

An all-round movie-going experience, Thor is the explosive and substantial summer movie season opener everyone has been hoping for, and is unmissable on this and any other of the eight known realms. Oh, and don’t forget to stay past the credits for a mind-blowing revelation.

SUMMARY: Action-packed, with a strong hold on a good story and boasting startlingly beautiful visuals, Thor will have everyone asking for more. By Odin’s command, see this one!