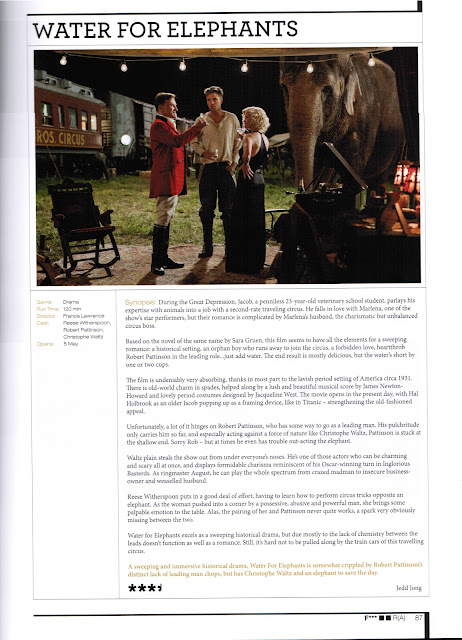 Based on the novel of the same name by Sara Gruen, this film seems to have all the elements for a sweeping romance: a historical setting, an orphan boy who runs away to join the circus, a forbidden love, heartthrob Robert Pattinson in the leading role...just add water. The end result is mostly delicious, but the water’s short by a cup or two.

The film is undeniably very absorbing, thanks in most part to the lavish period setting of America circa 1931. There is old-world charm in spades, helped along by a lush and beautiful musical score by James Newton-Howard and lovely period costumes designed by Jacqueline West. The movie opens in the present day, with Hal Holbrook as an older Jacob popping up as a framing device, like in Titanic – strengthening the old-fashioned appeal.

Unfortunately, a lot of it hinges on Robert Pattinson, who has some way to go as a leading man. His pulchritude only carries him so far, and especially acting against a force of nature like Christoph Waltz, Pattinson is stuck at the shallow end. Sorry Rob – but at times he even has trouble out-acting the elephant.

Waltz plain steals the show out from under everyone’s noses. He’s one of those actors who can be charming and scary all at once, and displays formidable charisma reminiscent of his Oscar-winning turn in Inglorious Basterds. As ringmaster August, he plays the whole spectrum from crazed madman to insecure business-owner and weaselled husband.

Reese Witherspoon puts in a good deal of effort, having to learn how to perform circus tricks opposite an elephant. As the woman pushed into a corner by a possessive, abusive and powerful man, she brings some palpable emotion to the table. Alas, the pairing of her and Pattinson never quite works, a spark very obviously missing between the two.

Water for Elephants excels as a sweeping historical drama, but due mostly to the lack of chemistry between the leads doesn’t function as well as a romance. Still, it’s hard not to be pulled along by the train cars of this travelling circus.

SUMMARY: A sweeping and immersive historical drama, Water For Elephants is somewhat crippled by Robert Pattinson’s distinct lack of leading man chops, but has Christoph Waltz and an elephant to save the day.