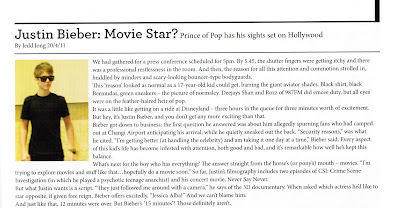 Princeling of Pop has his sights set on Hollywood

We had gathered for a press conference scheduled for 5 P.M. By 5.45, the shutter fingers were getting itchy and there was a professional restlessness in the room. And then, the reason for all this attention and commotion strolled in, huddled by minders and scary-looking bouncer-type bodyguards.

This “reason” looked as normal as a 17-year-old kid could get, barring the giant aviator shades. Black shirt, black Bermudas, green sneakers – the picture of normalcy. Deejays Shan and Rozz of 987 fm did emcee duty, but all eyes were on the feather-haired heir of pop.

It was a little like getting on a ride at Disneyland – three hours in the queue for three minutes worth of excitement. But hey – it’s Justin Bieber, and you don’t get any more exciting than that.

Bieber got down to business: the first question he answered was about him allegedly spurning fans who had camped out at Changi Airport anticipating his arrival, while he quietly sneaked out the back. “Security reasons” was what he cited. “I’m getting better (at handling the celebrity) and am taking it one day at a time”, Bieber said. Every aspect of this kid’s life had become infested with attention, both good and bad, and it was remarkable how well he kept this balance.

What’s next for the boy who has everything? The answer straight from the horse’s (or pony’s) mouth – movies. “I’m trying to explore movies and stuff like that…hopefully do a movie soon.” So far, Justin’s filmography includes two episodes of CSI: Crime Scene Investigation (in which he played a psychotic teenage anarchist) and his concert movie, Never Say Never.

But what Justin wants is a script. “They just followed me around with a camera”, he says of the 3D documentary. When asked which actress he’d like to star opposite, if given free reign, Bieber offers excitedly “Jessica Alba!” And we can’t blame him.

And just like that, “12 minutes with Justin” was over. But Bieber’s “15 minutes” – those definitely aren’t.

They said he’d never make it. I said I’d never watch it. Yet here we are, and here Bieber is at the height of his popularity. Director Jon Chu, famous for the Stomp the Yard films, has crafted a heady and exciting hybrid of the concert movie and the documentary: 2D footage of interviews and candid captures of Bieber’s life interspersed with 3D videos of his sell-out performance at Madison Square Garden.

Like it or not, this could well be the definitive concert film of our generation. This pretty much epitomises a good time at the movies, and is a great deal of fun to watch. Never Say Never peels back the candy wrapper and reveals a squeaky-clean Christian boy raised by a single mum, along with his tight inner circle.

Director Chu smartly addresses some of the hate hurled at Bieber, and the film has its tongue in its cheek at all the right moments. For example, Jaden Smith, son of Will and who had a rap duet with Justin on the titular song, is listed as a “karate expert”. Instead of taking Bieber-detractors head on, the film throws them a bone and could even convert them into Beliebers.

The film is as much a behind-the-scenes peek as it is a concert movie. Bieber is shown at his “realest”, and we glimpse how the 17-year-old, with the help of his mother, manager, vocal coach, head of security and others in his entourage, keeps a good head on his shoulders. This is juxtaposed with immersive 3D concert footage packed with gimmicky but effective camera tricks, including confetti rain and lots of the Biebs reaching out into the audience.

Expertly and slickly edited but somehow always sufficiently emotional and even inspirational, Never Say Never is a howling good time, and many will find themselves enjoying it in spite of themselves.

SUMMARY: A surprisingly fun concert film cleverly spliced with interviews and behind-the-scenes footage, Never Say Never is an insightful and enjoyable look behind the phenomenon that is Justin Bieber.