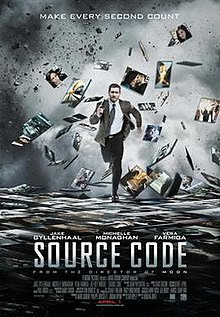 Lots of problems in this world could be prevented if we were granted a second look, to return to the scene before the incident even took place. Captain Colter Stevens (Gyllenhaal) is given such an opportunity – as part of the “Source Code” military program, he is made to repeatedly relive the last eight minutes of a train passenger’s life, in order to find the bomb and prevent the next attack.

Source Code is a heady blend of winning elements from all over the sci-fi mystery thriller genre – you have echoes of Deja Vu, The Matrix and Inception all stirred into the pot and simmered for maximum flavour. Duncan Jones’ direction greatly benefits the story, allowing the far-out concept to feel easily relatable and not too pie-in-the-sky.

The cast ably carries the source (heh) material on their shoulders. This is probably one of Jake Gyllenhaal’s best performances, where he doesn’t overly rely on his puppy dog eyes, instead portraying a confused, panicked but skilled soldier thrown into the thick of it very well.

Michelle Monaghan’s everyday girl-next-door appeal also helps to ground the movie, and on the other side of the program Vera Farmiga as the no-nonsense Goodwin and Jeffery Wright as the eccentric inventor of the Source Code itself lend gravitas to the proceedings.

The film is tautly-paced and gripping, the ticking bomb plot device truly effective. Some of the finer mechanics are brushed aside though, but this is in favour of character and story elements, which is a wise choice on the part of director Jones.

The pleasant surprise is that the movie is genuinely uplifting, hopeful and heart-warming at the end, the message of “making every second count” very much at its core. A well-rounded and wholly entertaining piece of filmmaking, Source Code crackles with pulse-pounding energy and is capable of delivering a warm fuzzy feeling or two.

SUMMARY: Intelligent, entertaining, pacey and even heartwarming, drink this straight from the Source.