As published in Issue #31 of F*** Magazine Singapore 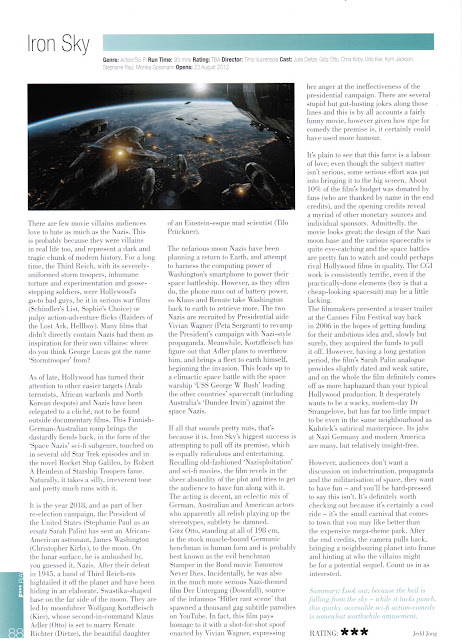 There are few movie villains audiences love to hate as much as the Nazis. This is probably because they were villains in real life too, and represent a dark and tragic chunk of modern history. For a long time, the Third Reich, with its severely-uniformed storm troopers, inhumane torture and experimentation and goose-stepping soldiers, were Hollywood’s go-to bad guys, be it in serious war films (Schindler’s List, Sophie’s Choice) or pulpy action-adventure flicks (Raiders of the Lost Ark, Hellboy). Many films that didn’t directly contain Nazis had them as inspiration for their own villains: where do you think George Lucas got the name “Stormtrooper” from?

As of late, Hollywood has turned their attention to other easier targets (Arab terrorists, African warlords and North Korean despots) and Nazis have been relegated to a cliché, not to be found outside documentary films. This Finnish-German-Australian romp brings the dastardly fiends back, in the form of the “Space Nazis” sci-fi subgenre, touched on in several old Star Trek episodes and in the novel Rocket Ship Galileo, by Robert A Heinlein of Starship Troopers fame. Naturally, it takes a silly, irreverent tone and pretty much runs with it.

It is the year 2018, and as part of her re-election campaign, the President of the United States (Stephanie Paul as an ersatz Sarah Palin) has sent an African-American astronaut, James Washington (Christopher Kirby), to the moon. On the lunar surface, he is ambushed by, you guessed it, Nazis. After their defeat in 1945, a band of Third Reich-ers hightailed it off the planet and have been hiding in an elaborate, Swastika-shaped base on the far side of the moon. They are led by moonfuhrer Wolfgang Kortzfleisch (Kier), whose second-in-command Klaus Adler (Otto) is set to marry Renate Richter (Dietze), the beautiful daughter of an Einstein-esque mad scientist (Tilo Prückner).

The nefarious moon Nazis have been planning a return to Earth, and attempt to harness the computing power of Washington’s smartphone to power their space battleship. However, as they often do, the phone runs out of battery power, so Klaus and Renate take Washington back to earth to retrieve more. The two Nazis are recruited by Presidential aide Vivian Wagner (Peta Sergeant) to revamp the President’s campaign with Nazi-style propaganda. Meanwhile, Kortzfleisch has figured out that Adler plans to overthrow him, and brings a fleet to earth himself, beginning the invasion. This leads up to a climactic space battle with the space warship “USS George W Bush” leading the other countries’ spacecraft (including Australia’s “Dundee Irwin”) against the space Nazis.

If all that sounds pretty nuts, that’s because it is. Iron Sky's biggest success is attempting to pull off its premise, which is equally ridiculous and entertaining. Recalling old-fashioned "Nazisploitation" and sci-fi movies, the film revels in the sheer absurdity of the plot and tries to get the audience to have fun along with it. The acting is decent, an eclectic mix of German, Australian and American actors who apparently all relish playing up the stereotypes, subtlety be damned.

Götz Otto, standing at all of 198 cm, is the stock muscle-bound Germanic henchman in human form and is probably best known as the evil henchman Stamper in the Bond movie Tomorrow Never Dies. Incidentally, he was also in the much more serious Nazi-themed film Der Untergang (Downfall), source of the infamous “Hitler rant scene” that spawned a thousand gag subtitle parodies on YouTube. In fact, this film pays homage to it with a shot-for-shot spoof enacted by Vivian Wagner, expressing her anger at the ineffectiveness of the presidential campaign. There are several stupid but gut-busting jokes along those lines and this is by all accounts a fairly funny movie, however given how ripe for comedy the premise is, it certainly could have used more humour.

It's plain to see that this farce is a labour of love; even though the subject matter isn't serious, some serious effort was put into bringing it to the big screen. About 10% of the film's budget was donated by fans (who are thanked by name in the end credits), and the opening credits reveal a myriad of other monetary sources and individual sponsors. Admittedly, the movie looks great; the design of the Nazi moon base and the various spacecrafts is quite eye-catching and the space battles are pretty fun to watch and could perhaps rival Hollywood films in quality. The CGI work is consistently terrific, even if the practically-done elements (boy is that a cheap-looking spacesuit) may be a little lacking.

The filmmakers presented a teaser trailer at the Cannes Film Festival way back in 2006 in the hopes of getting funding for their ambitious idea and, slowly but surely, the acquired the funds to pull it off. However, having a long gestation period, the film's Sarah Palin analogue provides slightly dated and weak satire, and on the whole the film definitely comes off as more haphazard than your typical Hollywood production. It desperately wants to be a wacky, modern-day Dr Strangelove, but has far too little impact to be even in the same neighbourhood as Kubrick’s satirical masterpiece. Its jabs at Nazi Germany and modern America are many, but relatively insight-free.

However, audiences don’t want a discussion on indoctrination, propaganda and the militarisation of space, they want to have fun – and you’ll be hard-pressed to say this isn’t. It’s definitely worth checking out because it's certainly a cool ride – it’s the small carnival that comes to town that you may like better than the expensive mega-theme park. After the end credits, the camera pulls back, bringing a neighbouring planet into frame and hinting at who the villains might be for a potential sequel. Count us in as interested.
SUMMARY: Look out; because the heil is falling from the sky – while it lacks punch, this quirky, accessible sci-fi action-comedy is somewhat worthwhile amusement.

Jedd Jong
Posted by Jedd the Jedi at 9:01 PM