As published in Issue #31 of F*** Magazine, Singapore 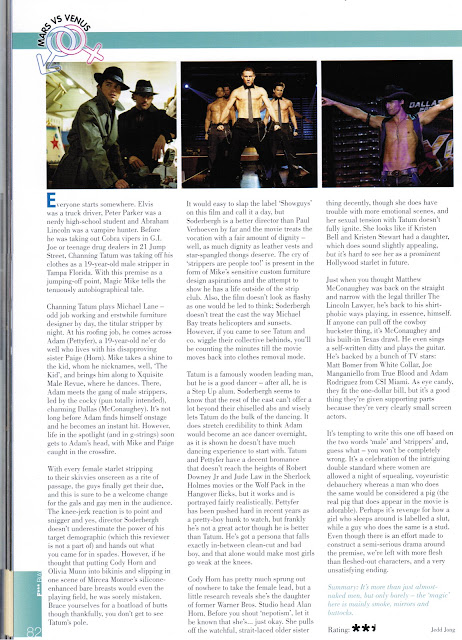 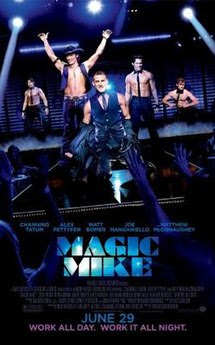 Everyone starts somewhere. Elvis was a truck driver, Peter Parker was a nerdy high-school student and Abraham Lincoln was a vampire hunter. Before he was taking out Cobra vipers in G.I. Joe or teenage drug dealers in 21 Jump Street, Channing Tatum was taking off his clothes as a 19-year-old male stripper in Tampa Florida. With this premise as a jumping-off point, Magic Mike tells the tenuously autobiographical tale.

Channing Tatum plays Michael Lane – odd job working and erstwhile furniture designer by day, the stripper of the title by night. At his roofing job, he comes across Adam (Pettyfer), a 19-year-old ne’er do well who lives with his disapproving sister Paige (Horn). Mike takes a shine to the kid, whom he nicknames, well, “The Kid”, and brings him along to Xquisite Male Revue, where he dances. There, Adam meets the gang of male strippers, led by the cocky (pun totally intended), charming Dallas (McConaughey). It’s not long before Adam finds himself onstage and he becomes an instant hit. However, life in the spotlight (and in g-strings) soon gets to Adam’s head, with Mike and Paige caught in the crossfire.

With every female starlet stripping to their skivvies onscreen as a rite of passage, the guys finally get their due, and this is sure to be a welcome change for the gals and gay men in the audience. The knee-jerk reaction is to point and snigger and yes, director Soderbergh doesn’t underestimate the power of his target demographic (which this reviewer is not a part of) and hands out what you came for in spades. However, if he thought that putting Cody Horn and Olivia Munn into bikinis and slipping in one scene of Mircea Monroe’s silicone-enhanced bare breasts would even the playing field, he was sorely mistaken. Brace yourselves for a boatload of butts though thankfully, you don’t get to see Tatum’s pole.

It would easy to slap the label “Showguys” on this film and call it a day, but Soderbergh is a better director than Paul Verhoeven by far and the movie treats the vocation with a fair amount of dignity – well, as much dignity as leather vests and star-spangled thongs deserve. The cry of “strippers are people too!” is present in the form of Mike’s sensitive custom furniture design aspirations and the attempt to show he has a life outside of the strip club. Also, the film doesn’t look as flashy as one would be led to think; Soderbergh doesn’t treat the cast the way Michael Bay treats helicopters and sunsets. However, if you came to see Tatum and co. wiggle their collective behinds, you’ll be counting the minutes till the movie moves back into clothes removal mode.

Tatum is a famously wooden leading man, but he is a good dancer – after all, he is a Step Up alum. Soderbergh seems to know that the rest of the cast can’t offer a lot beyond their chiselled abs and wisely lets Tatum do the bulk of the dancing. It does stretch credibility to think Adam would become an ace dancer overnight, as it is shown he doesn’t have much dancing experience to start with. Tatum and Pettyfer have a decent bromance that doesn’t reach the heights of Robert Downey Jr and Jude Law in the Sherlock Holmes movies or the Wolf Pack in the Hangover flicks, but it works and is portrayed fairly realistically. Pettyfer has been pushed hard in recent years as a pretty-boy hunk to watch, but frankly he’s not a great actor though he is better than Tatum. He’s got a persona that falls exactly in-between clean-cut and bad boy, and that alone would make most girls go weak at the knees.

Cody Horn has pretty much sprung out of nowhere to take the female lead, but a little research reveals she’s the daughter of former Warner Bros. Studio head Alan Horn. Before you shout “nepotism”, let it be known that she’s... just okay. She pulls off the watchful, strait-laced older sister thing decently, though she does have trouble with more emotional scenes, and her sexual tension with Tatum doesn’t fully ignite. She looks like if Kristen Bell and Kristen Stewart had a daughter, which does sound slightly appealing, but it’s hard to see her as a prominent Hollywood starlet in future.

Just when you thought Matthew McConaughey was back on the straight and narrow with the legal thriller The Lincoln Lawyer, he’s back to his shirt-phobic ways playing, in essence, himself. If anyone can pull off the cowboy huckster thing, it’s McConaughey and his built-in Texas drawl. He even sings a self-written ditty and plays the guitar. He’s backed by a bunch of TV stars: Matt Bomer from White Collar, Joe Manganiello from True Blood and Adam Rodriguez from CSI Miami. As eye candy, they fit the one-dollar bill, but it’s a good thing they’re given supporting parts because they’re very clearly small screen actors.

It’s tempting to write this one off based on the two words “male” and “strippers” and, guess what – you won’t be completely wrong. It’s a celebration of the intriguing double standard where women are allowed a night of squealing, voyeuristic debauchery whereas a man who does the same would be considered a pig (the real pig that does appear in the movie is adorable). Perhaps it’s revenge for how a girl who sleeps around is labelled a slut, while a guy who does the same is a stud. Even though there is an effort made to construct a semi-serious drama around the premise, we’re left with more flesh than fleshed-out characters, and a very unsatisfying ending.

SUMMARY: It’s more than just almost-naked men, but only barely – the “magic” here is mainly smoke, mirrors and buttocks.

Jedd Jong
Posted by Jedd the Jedi at 8:59 PM