Seeking A Friend For The End of the World

As published in Issue #31 of F*** Magazine Singapore. 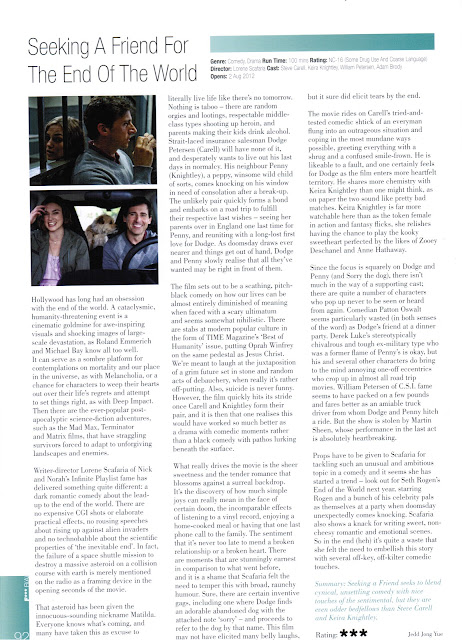 SEEKING A FRIEND FOR THE END OF THE WORLD
2012 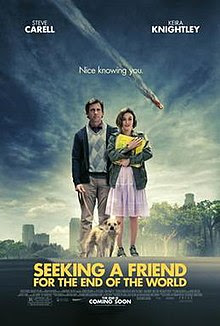 Hollywood has long had an obsession with the end of the world. A cataclysmic, humanity-threatening event is a cinematic goldmine for awe-inspiring visuals and shocking images of large-scale devastation, as Roland Emmerich and Michael Bay know all too well. It can serve as a somber platform for contemplations on mortality and our place in the universe, as with Melancholia, or a chance for characters to weep their hearts out over their life’s regrets and attempt to set things right, as with Deep Impact. Then there are the ever-popular post-apocalyptic science-fiction adventures, such as the Mad Max, Terminator and Matrix films, that have straggling survivors forced to adapt to unforgiving landscapes and enemies.

Writer-director Lorene Scafaria of Nick and Norah’s Infinite Playlist fame has delivered something quite different: a dark romantic comedy about the lead-up to the end of the world. There are no expensive CGI shots or elaborate practical effects, no rousing speeches about rising up against alien invaders and no technobabble about the scientific properties of “the inevitable end”. In fact, the failure of a space shuttle mission to destroy a massive asteroid on a collision course with earth is merely mentioned on the radio as a framing device in the opening seconds of the movie.

That asteroid has been given the innocuous-sounding nickname Matilda. Everyone knows what’s coming, and many have taken this as an excuse to literally live life like there’s no tomorrow. Nothing is taboo – there are random orgies and lootings, respectable middle-class types shooting up heroin, and parents making their kids drink alcohol. Strait-laced insurance salesman Dodge Petersen (Carell) will have none of it, and desperately wants to live out his last days in normalcy. His neighbour Penny (Knightley), a peppy, winsome wild child of sorts, comes knocking on his window in need of consolation after a break-up. The unlikely pair quickly forms a bond and embarks on a road trip to fulfill their respective last wishes – seeing her parents over in England one last time for Penny, and reuniting with a long-lost first love for Dodge. As doomsday draws ever nearer and things get out of hand, Dodge and Penny slowly realize that all they’ve wanted may be right in front of them.

The film sets out to be a scathing, pitch-black comedy on how our lives can be almost entirely diminished of meaning when faced with a scary ultimatum and seems somewhat nihilistic. There are stabs at modern popular culture in the form of TIME Magazine’s “Best of Humanity” issue, putting Oprah Winfrey on the same pedestal as Jesus Christ. We’re meant to laugh at the juxtaposition of a grim future set in stone and random acts of debauchery, when really it’s rather off-putting. Also, suicide is never funny. However, the film quickly hits its stride once Carell and Knightley form their pair, and it is then that one realizes this would have worked so much better as a drama with comedic moments rather than a black comedy with pathos lurking beneath the surface.

What really drives the movie is the sheer sweetness and the tender romance that blossoms against a surreal backdrop. It’s the discovery of how much simple joys can really mean in the face of certain doom, the incomparable effects of listening to a vinyl record, enjoying a home-cooked meal or having that one last phone call to the family. The sentiment that it’s never too late to mend a broken relationship or a broken heart. There are moments that are stunningly earnest in comparison to what went before, and it is a shame that Scafaria felt the need to temper this with broad, raunchy humour. Sure, there are certain inventive gags, including one where Dodge finds an adorable abandoned dog with the attached note “sorry” – and proceeds to refer to the dog by that name. This film may not have elicited many belly laughs, but it sure did elicit tears by the end.

The movie rides on Carell’s tried-and-tested comedic shtick of an everyman flung into an outrageous situation and coping in the most mundane ways possible, greeting everything with a shrug and a confused smile-frown. He is likeable to a fault, and one certainly feels for Dodge as the film enters more heartfelt territory. He shares more chemistry with Keira Knightley than one might think, as on paper the two sound like pretty bad matches. Keira Knightley is far more watchable here than as the token female in action and fantasy flicks, she relishes having the chance to play the kooky sweetheart perfected by the likes of Zooey Deschanel and Anne Hathaway.

Since the focus is squarely on Dodge and Penny (and Sorry the dog), there isn’t much in the way of a supporting cast; there are quite a number of characters who pop up never to be seen or heard from again. Comedian Patton Oswalt seems particularly wasted (in both senses of the word) as Dodge’s friend at a dinner party. Derek Luke’s stereotypically chivalrous and tough ex-military type who was a former flame of Penny’s is okay, but his and several other characters do bring to the mind annoying one-off eccentrics who crop up in almost all road trip movies. William Petersen of C.S.I. fame seems to have packed on a few pounds and fares better as an amiable truck driver from whom Dodge and Penny hitch a ride. But the show is stolen by Martin Sheen, whose performance in the last act is absolutely heartbreaking.

Props have to be given to Scafaria for tackling such an unusual and ambitious topic in a comedy and it seems she has started a trend – look out for Seth Rogen’s End of the World next year, starring Rogen and a bunch of his celebrity pals as themselves at a party when doomsday unexpectedly comes knocking. Scafaria also shows a knack for writing sweet, non-cheesy romantic and emotional scenes. So in the end (heh) it’s quite a waste that she felt the need to embellish this story with several off-key, off-kilter comedic touches.

SUMMARY: Seeking a Friend seeks to blend cynical, unsettling comedy with nice touches of the sentimental, but they are even odder bedfellows than Steve Carell and Keira Knightley.