(The following review is spoiler-free) 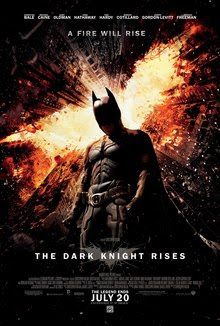 Is it bright where you are
Have the people changed
Does it make you happy you're so strange
And in your darkest hour, I hold secret’s flame
You can watch the world devoured in its pain

So go the lyrics to Smashing Pumpkins’ The End is the Beginning Is the End, from 1997’s Batman and Robin. It seems at least a little ironic that a song from the worst Batman film ever made seems to sum up the plot of what is possibly the best Batman film ever made. Christopher Nolan, his brother Jonathan, wife and producer Emma Thomas, co-plotter David S Goyer and their whole production posse seem to have had a Sisyphean task thrust upon them in topping 2008’s The Dark Knight, widely hailed as the best comic book-based film ever made and having bragging rights as the only Batman film that won an Academy Award in an acting category. Laconically put, they have. They have made a Batman film better than The Dark Knight.

Eight years have transpired since the events of the last film, and a frail and battered Bruce Wayne (Bale) has gone into self-imposed exile within the walls of the rebuilt Wayne Manor, haunted by his perceived failure as the Dark Knight. Gotham City has settled into a comfortable position as a hellhole reformed, and there seems to be no further need for Batman or his ally Commissioner Gordon (Gary Oldman), himself tormented by the fateful death of Harvey Dent all those years ago. The new CEO of Wayne Enterprises Miranda Tate (Marion Cotillard) is facing the absorption of the company by the amoral John Daggett (Ben Mendelssohn)  and appeals to Bruce Wayne to put the fusion energy machine developed by Lucius Fox (Morgan Freeman) into action.

However, the sinister, brutish yet ruthlessly cunning masked criminal Bane (Hardy) has revolution on the brain. He puts into motion a devastating and far-reaching master plan that will lead to Gotham’s downfall, giving the greedy and corrupt elite the retribution they deserve. Meanwhile, Bruce catches the thief Selina Kyle (Hathaway) stealing a precious memento from him, and they play their requisite game of cat-and-bat. The rookie cop John Blake (Gordon-Levitt) sees that there is hope yet for his broken city, as deputy commissioner Foley (Matthew Modine) dismisses the efforts of Blake and Gordon. Now more than ever, Wayne feels the weight on his weary shoulders and must pull himself together to save and liberate the city that turned on him.

It’s quite safe to say that there has very rarely been a film with such hype and anticipation heaped onto it, a film so widely viewed as an event rather than a mere movie. There has also very rarely been a tougher act to follow than The Dark Knight. However, those involved seem to have taken this immense challenge head on and spectacularly shattered the brick wall of lofty expectations with a motion picture that delivers on such a grandiose scale Cecil B DeMille would be jealous. It’s not so much the filmmaking tools that were available to Nolan, as there are many movies with high production values that fall flat story or character wise. It’s the sheer craft and dedication plain to see which make it all the more satisfying to soak in.

Nolan has said that he and his brother were inspired by Dickens’ classic story A Tale of Two Cities, and that it just so happened that the recession and the “Occupy Wall Street” movement occurred, so if he is to be believed, it is partial coincidence that this is a very, very timely story. Bane’s role in the story is that of zealous liberator who sees himself as a saviour who “frees” Gotham from the clutches of the 1% by ambushing the stock exchange, isolating Gotham City from the country at large and seizing control through intimidation and bravado. There are many parallels to be drawn to such events as the Hurricane Katrina aftermath, the 9/11 attacks and the Oklahoma City bombing. This is also echoed by the characterisation of Catwoman, who steals from the rich not to give to the poor, but rather to spite the rich. Bane launches an attack on a sports stadium right after “The Star-Spangled Banner” is sung, and there is a shot of a tattered American flag. A city’s resolve broken, with Batman and his allies stepping in to patch it up in the face of insurmountable odds.

While no one actor in the film matches the tour de force of the late Heath Ledger’s turn as the Joker in the previous instalment, the overall effect of this film certainly carries more impact. For one, it follows a solid plot line and doesn’t lapse into false endings the way The Dark Knight sometimes did. Some felt that Nolan might fall into the trap of a tangled web of subplots and extraneous villains along the lines of Spider-Man 3, but it is safe to say he didn’t.

The big thing this one does that Part 2 didn’t was it ties back to the previous instalments, making character arcs come full circle in a deeply satisfying manner. Also, it is more faithful to the source material than one might think; this isn’t merely a war movie with Batman characters tacked onto it. There are some explosive plot twists and revelations – comic book devotees may see these coming a mile away, but Nolan plays a game of “maybe I will, maybe I won’t”, so that when such turning points occur they are truly sensational.

Bale has made it clear that this will almost certainly be his last outing in the cape and cowl, and as the backbone of the trilogy, he has done an outstanding job. His portrayal gives Batman the combination of a tortured psyche, an iron resolve and a remarkable physicality, and it is great to see him rise again. Michael Caine’s Alfred has a slightly reduced role in the story, although he is given a rift with Bruce Wayne and it is intriguing to see the strongest relationship in Bruce’s life undergo quite the testing. Newcomer Joseph Gordon-Levitt could have felt out of place in Nolan’s grim Gotham, but as John Blake, his fresh-faced, idealistic optimism may actually be his greatest asset.

Compared to other villains who have appeared in Batman films, Bane is a relatively recent introduction in the comics, having made his debut in Batman: Vengeance of Bane #1 in 1993. Tom Hardy does quite the job of making Bane more than Batman’s mental and physical match. Half his face obscured by a mask that is a cross between an attack dog’s muzzle and venomous spider, the actor still manages to be charismatic and larger-than-life while displaying commendable restraint. This certainly is very many notches up Robert Swenson’s portrayal of Bane in Batman and Robin, in that film reduced to a barely-articulate, brutish errand boy. Throughout the whole film, Hardy talks with a Sean Connery-esque lilt that makes him sound amused by all the suffering he has caused – but he briefly switches to a more sinister tone during his brutal one-on-one encounter with Batman in the middle of the film.

Despite being widely lauded for his strengths as a writer-director, Christopher Nolan’s Achilles heel is widely regarded to be writing women. He breaks that spell with Catwoman, her characterisation damn near perfect and portrayed with very surprising skill by Anne Hathaway. This reviewer was amongst the scores who doubted the decision to cast the actress best known for playing kooky sweethearts as a dangerous femme fatale, but Hathaway sure did pull this one off. Her Selina Kyle is confident, self-assured, oh-so-seductive and quick with a scathing remark, but Hathaway also conveys the well-hidden torment within her. And she also performs one of the best exasperated eye-rolls in cinematic history! Marion Cotillard fulfils the more traditional damsel-in-a-degree-of-distress role, her Miranda Tate kind and disarming, and it is easy to see why Bruce Wayne would fall headlong for her. Of course her character has her own tragic past, and Cotillard can be counted upon to deliver that aspect of Tate too.

Beyond the story and performances, The Dark Knight Rises looks, sounds and feels like the event it is touted to be. Cinematographer Wally Pfister throws in some very inventive shots, including a brief moment where a charging Batman is lit by muzzle flashes, and delivers dizzyingly gorgeous panoramas as well. Chris Corbould and his practical effects crew help stage several awe-inspiring action set-pieces, and the tone is set well with an opening scene involving a staged plane crash orchestrated by Bane. There is a level of admiration to be had when a film fits a massive brawl shot on Wall Street, the Mehrangarh Fort in Jodhpur, India and a terrorist attack on a football stadium (Pittsburgh’s Heinz Field) into one movie. It’s also of note that most films of this kind try to cram in shiny gadgets to sell more toys, but apart from “The Bat" most of Batman's gadgets are recycled from the second movie in the name of practicality.

Christopher Nolan and co. have brought the curtain down on their trilogy in truly bittersweet fashion. These three films were emblematic of The Dark Knight rising, rising from an outrageously campy, seemingly franchise-killing film. This is the final cape flourish, the big send-off, the tearful goodbye. As Dickens wrote in the book that partially inspired this movie, “it was the best of times, it was the worst of times” – this is the Caped Crusader’s finest hour, and seeing this incarnation hang up the cape and cowl is quite saddening indeed.

SUMMARY: The Dark Knight Rises takes Nolan’s trademark blend of spectacle and thought-provoking substance up to eleven, delivering a meaty, satisfying last course of the Batman set meal – and you’ll want another taste as soon as you’re done.