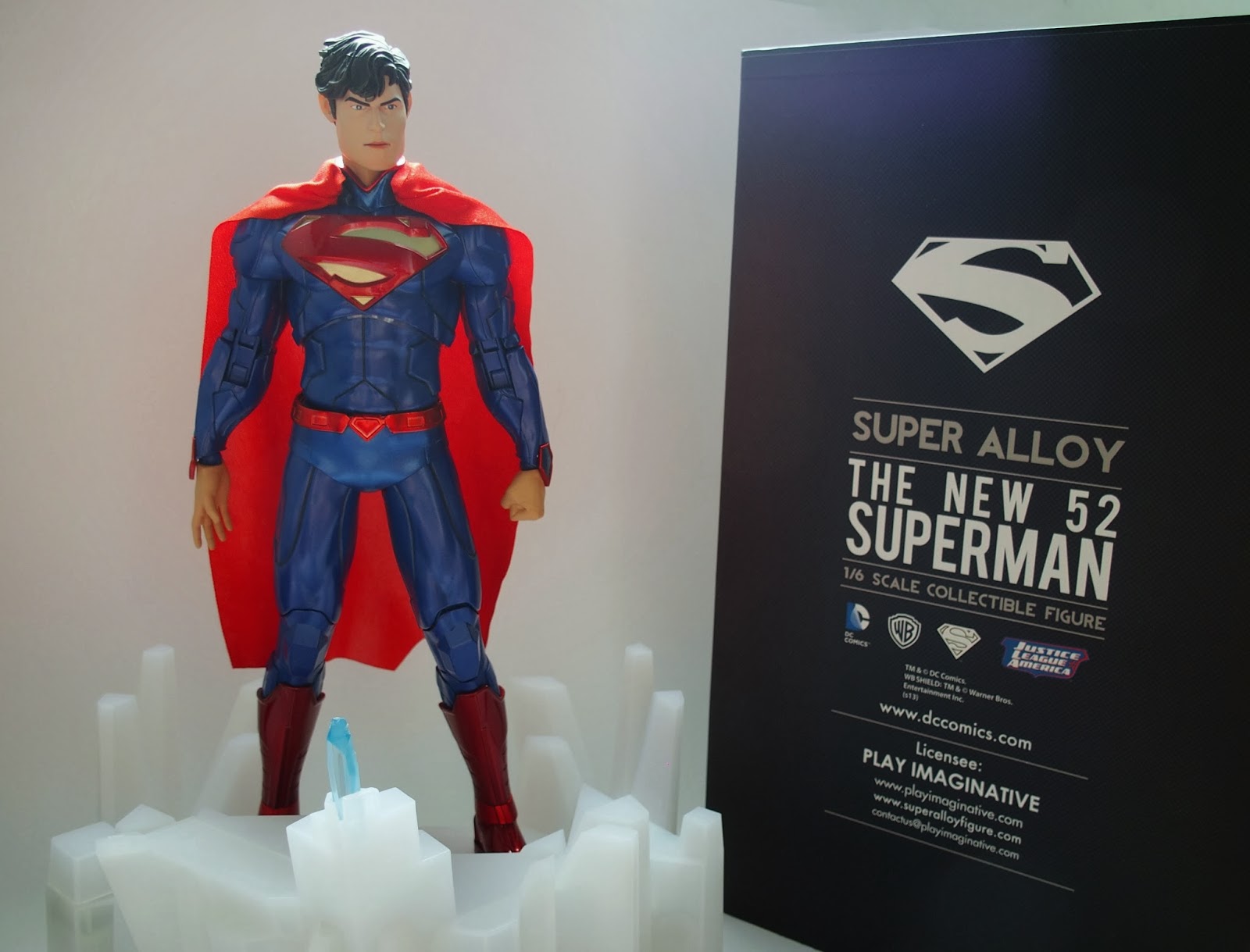 Singaporean toy company Play Imaginative threw their hat into the sixth scale ring with the release of the Super Alloy Batman figure in 2012, designed by Jim Lee and not quite New 52. Play Imaginative has continued the Super Alloy range, inspired by Japanese die-cast metal “Chogokin” toys. Iron Man seemed a natural fit and they’ve produced multiple Iron Man “marks” across three scales. DC fans (such as myself) can rejoice in the fact that Play Imaginative is also representin’ for the House of El.

Today, we’re looking at the Super Alloy New 52 Superman. The DC collection from Play Imaginative thus far consists of Batman,  Superman and Green Lantern, with Cyborg and the Flash coming soon (prototypes of which were on display at Comic-Con in 2013). The established style of the figures is a combination of multiple points of articulation with more than 80% of the figure made from die-cast metal, resulting in a pretty heavy product. Superman’s New 52 look has him donning something closer to light, flexible armour instead of the usual skin-tight spandex, and the Play Imaginative design captures that well, the shiny “S” crest being particularly eye-catching. 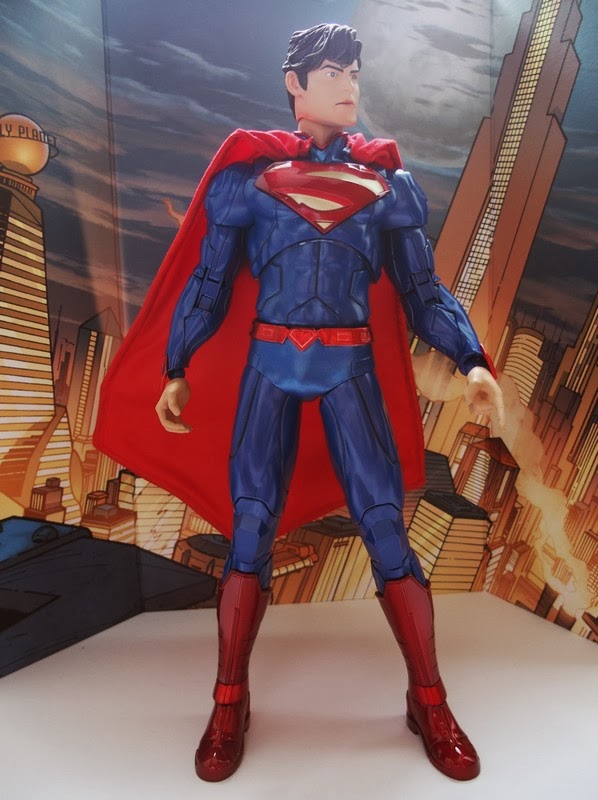 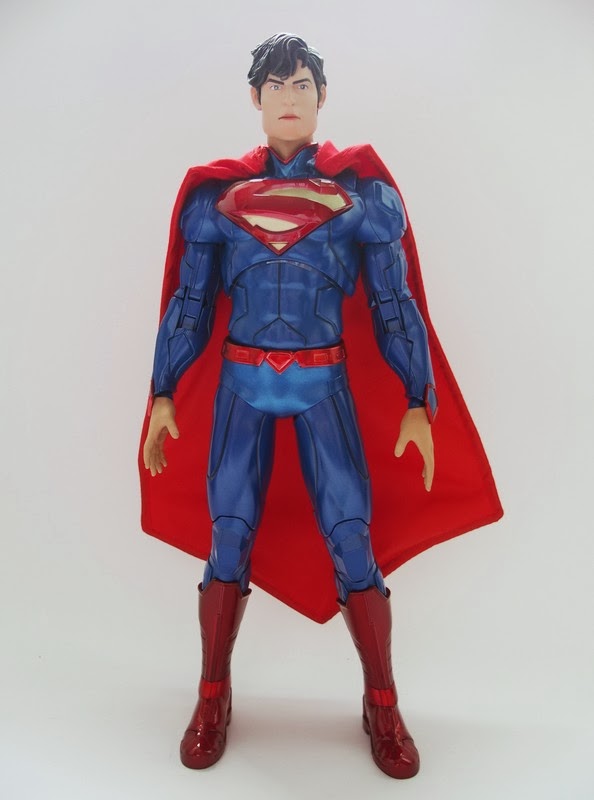 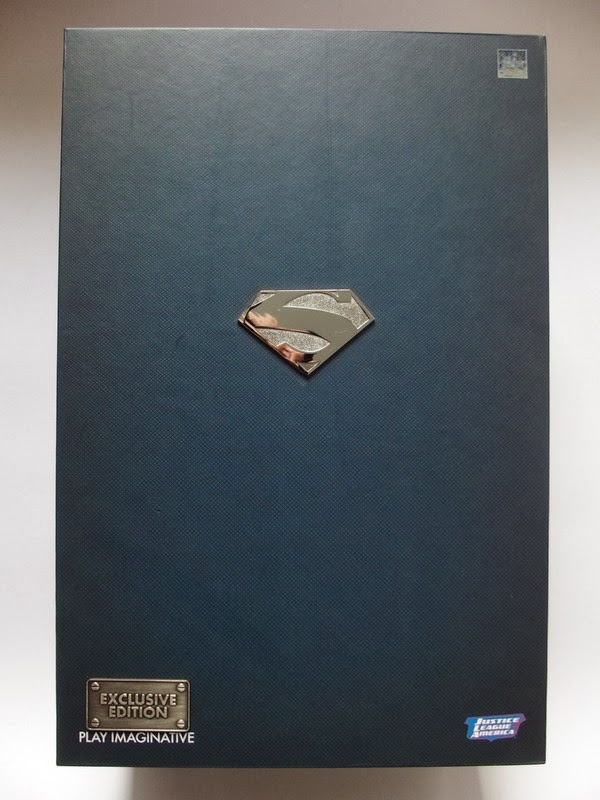 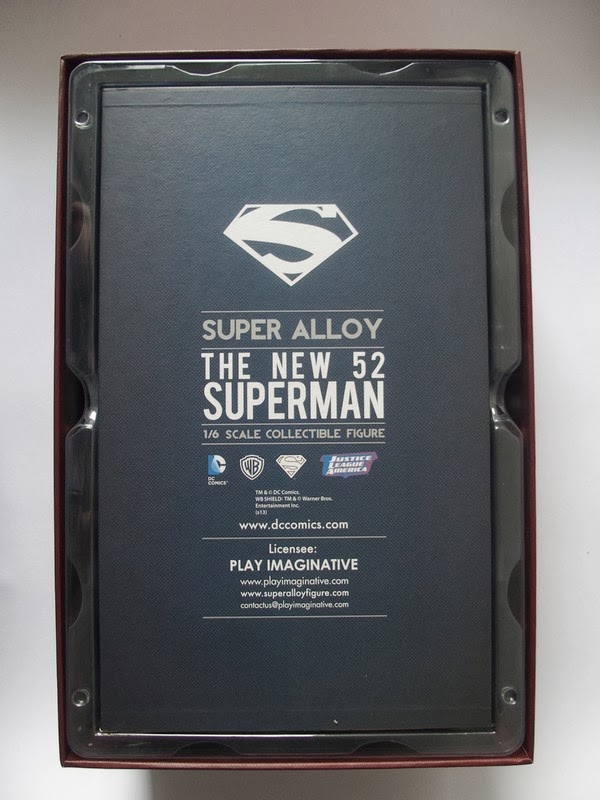 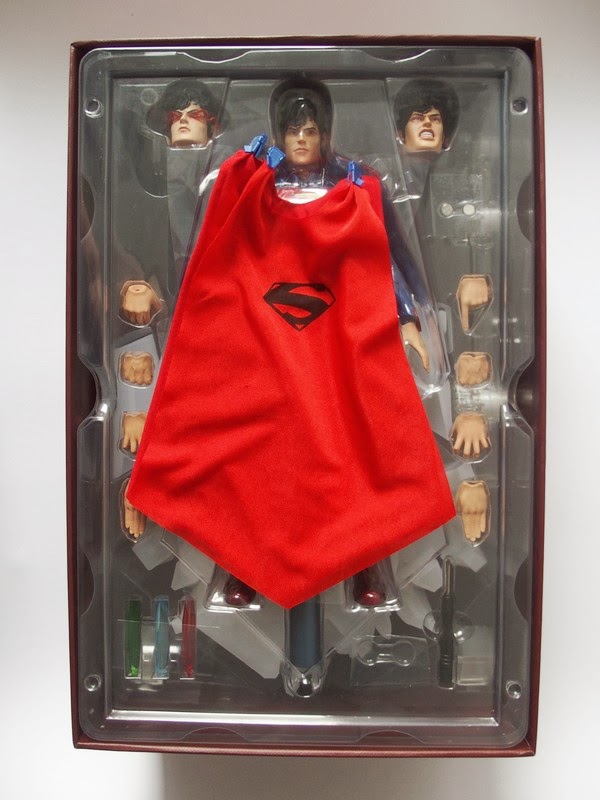 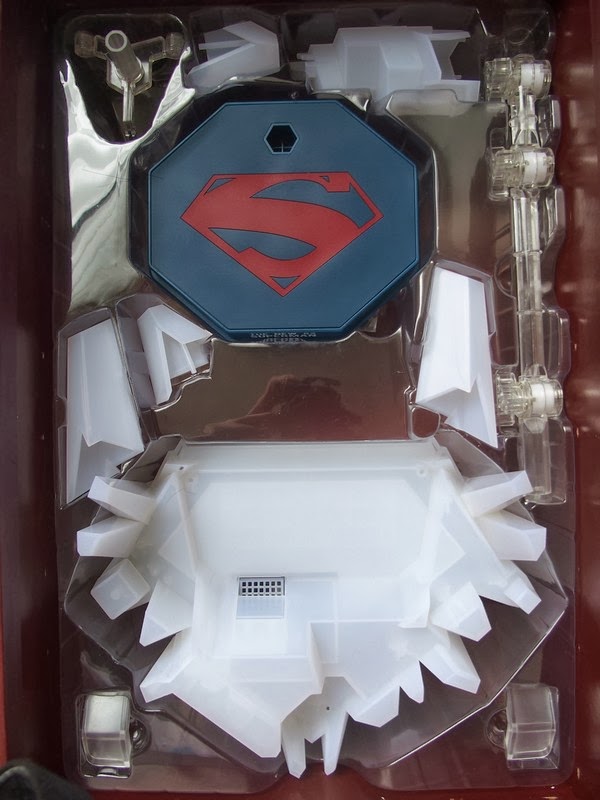 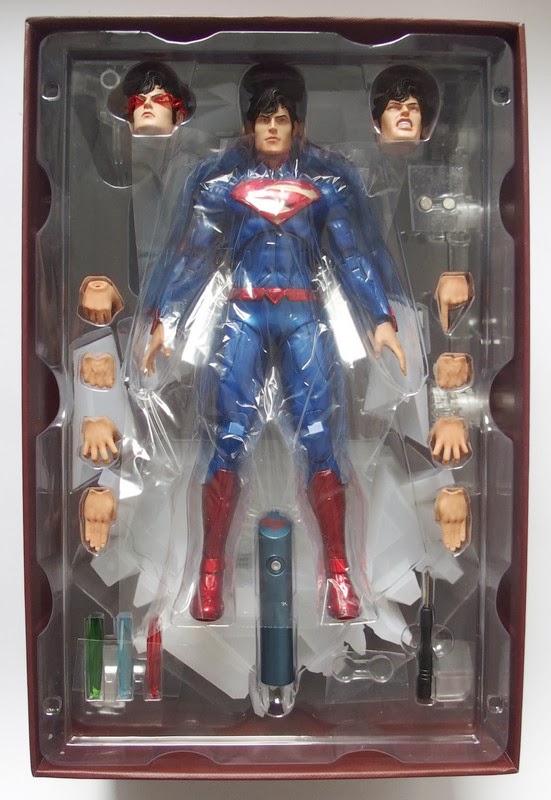 The packaging is elegant and simple, with a reflective S crest affixed to a matte, textured box. Lifting the lid, you’ll see a cardboard backdrop of the Metropolis skyline folded into three parts. The backdrop looks okay but the art isn’t quite detailed enough, this Metropolis having a bit of a “colouring book” feel to it. Beneath that, you’ll see the two capes (more on that later) and a tray housing the figure along with the alternate hands and heads, plus a few more extras. Beneath that tray are the components of two display bases, one made to look like a chunk of the Fortress of Solitude and another more traditional base with an attachable segmented stand. 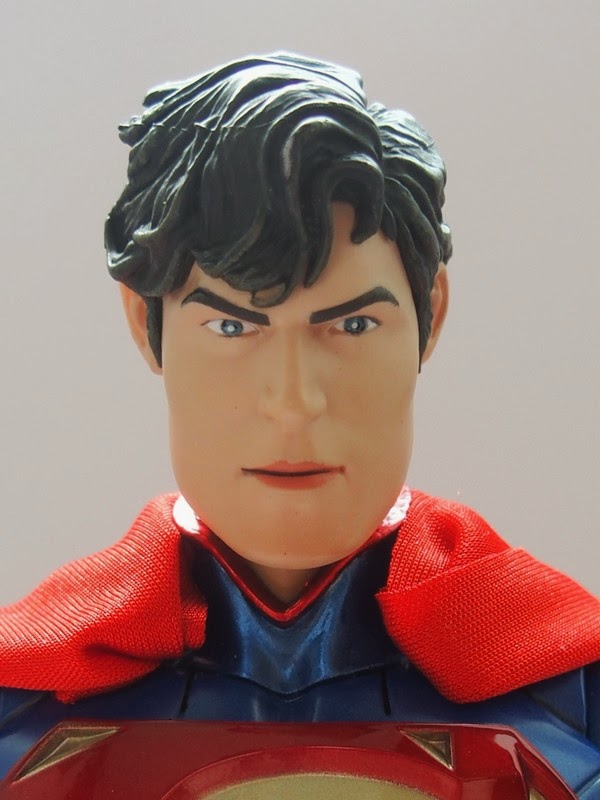 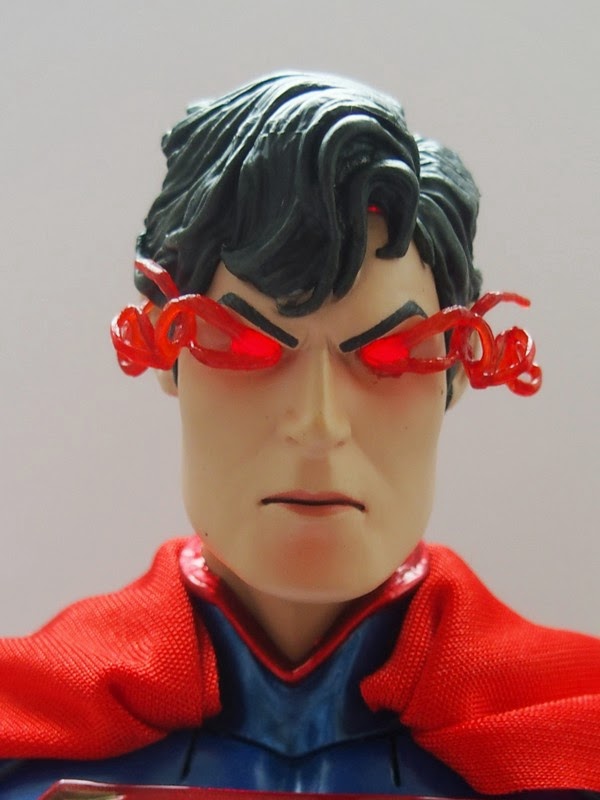 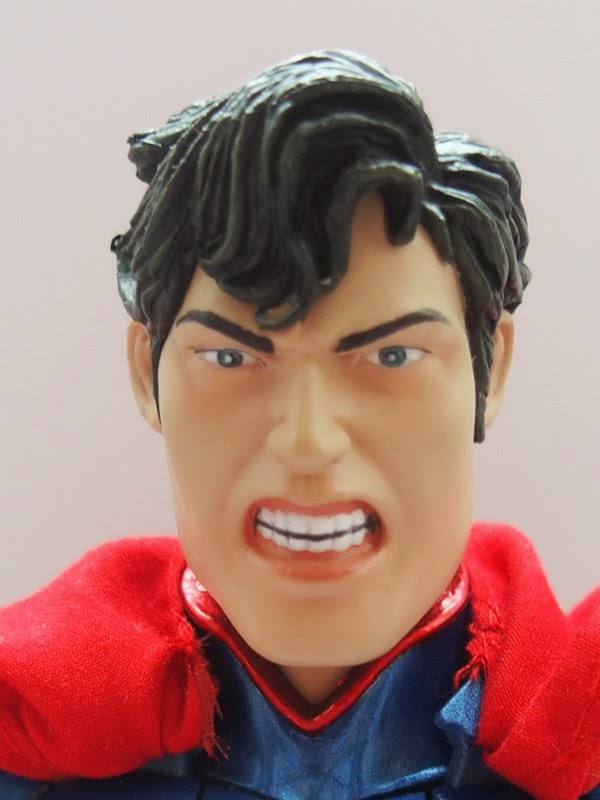 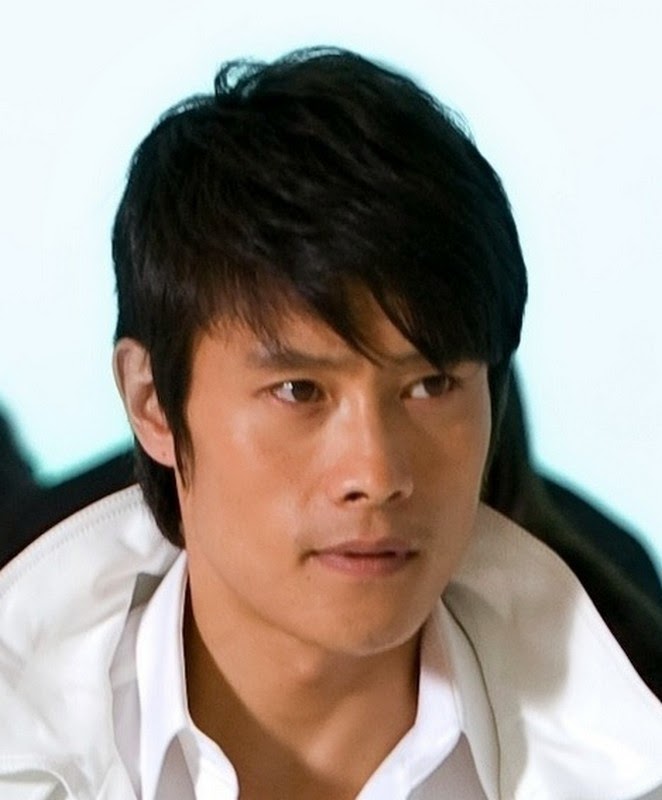 Superman’s design is squarely that of the New 52, and it’s not a look that’s universally beloved so those who were wishing for a sixth scale classic Supes made mostly from die-cast metal will be disappointed – but then again, how is that even going to work? Play Imaginative has done a good job of not making this Superman look too clunky or bulky and the shiny, glossy red and blue look great. We’re given three interchangeable heads: the default one, a light-up heat vision head with “energy blast” effects around his eyes and an angry one with teeth bared. The portraits of this version of Superman are well-sculpted but do look very Asian, being inspired by Jim Lee’s New 52 art. I thought there was something of a resemblance to Korean actor Lee Byung-Hun (Storm Shadow in the G.I. Joe movies), so that’s another aspect in which New 52 Supes clearly deviates from the classic iteration. The range of motion is adequate but he can’t look all the way up for flying poses. The light-up effect is really neat, but if you look closely you can see red light creeping through from under his hair. 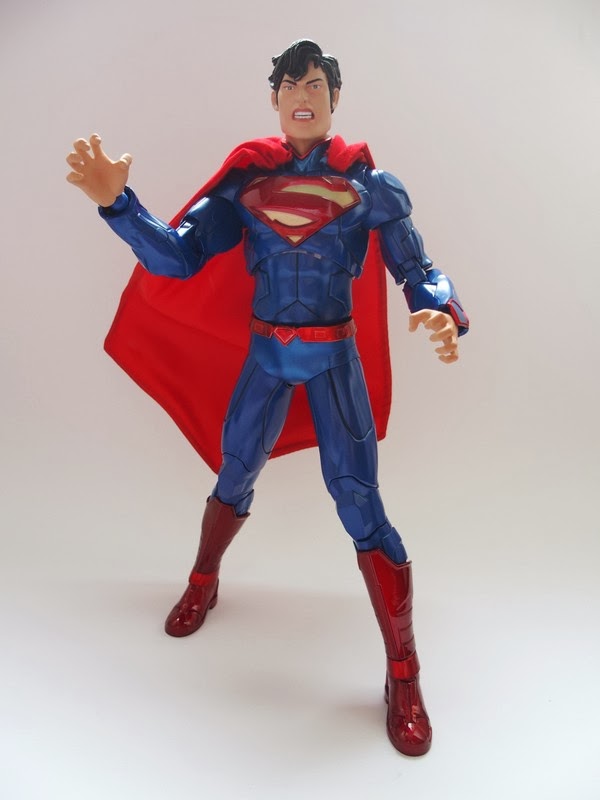 For lack of a segue, Superman’s crotch. Upon seeing photos of the figure, it kinda looked like Superman was wearing a diaper – and ironically enough, this would probably have been less noticeable if it was the classic red briefs. The material covering the figure’s crotch is made of a thin, flexible plastic so as not to get in the way of leg articulation too much but I stopped being bothered by how it looked after a while. This is a very well-articulated figure: ball neck, ball shoulders, double elbows and knees, ball-jointed wrists and ankles, an ab joint and waist swivel, all that good stuff. It looks like there’s a bicep cut, but you can’t actually turn it. It took me a while to pose him right so he wouldn’t tip over and smash his face into the floor because he is pretty top heavy, so do watch out for that.

There’s a whole bunch of cool accessories and Superman isn’t even a gadget-oriented character, so props to Play Imaginative for coming up with stuff to include with him. There are four additional pairs of interchangeable hands, so Supes can punch, have fingers straight out in a flying pose, point at something or go all animalistic with a claw-like grasp. Two capes are included, one of them wired up so it can be posed and the other to just hang off Supes’ shoulders and be blown up by the fan in the base (more on that later). The capes are kind of finicky to attach to the figure and the clips are prone to coming apart. The non-wired cape feels like it might fray easily and is made of very thin cloth material; the “S” crest printed on the back is also visible from the back, kind of bleeding through, but it’s not noticeable since it is facing his back. 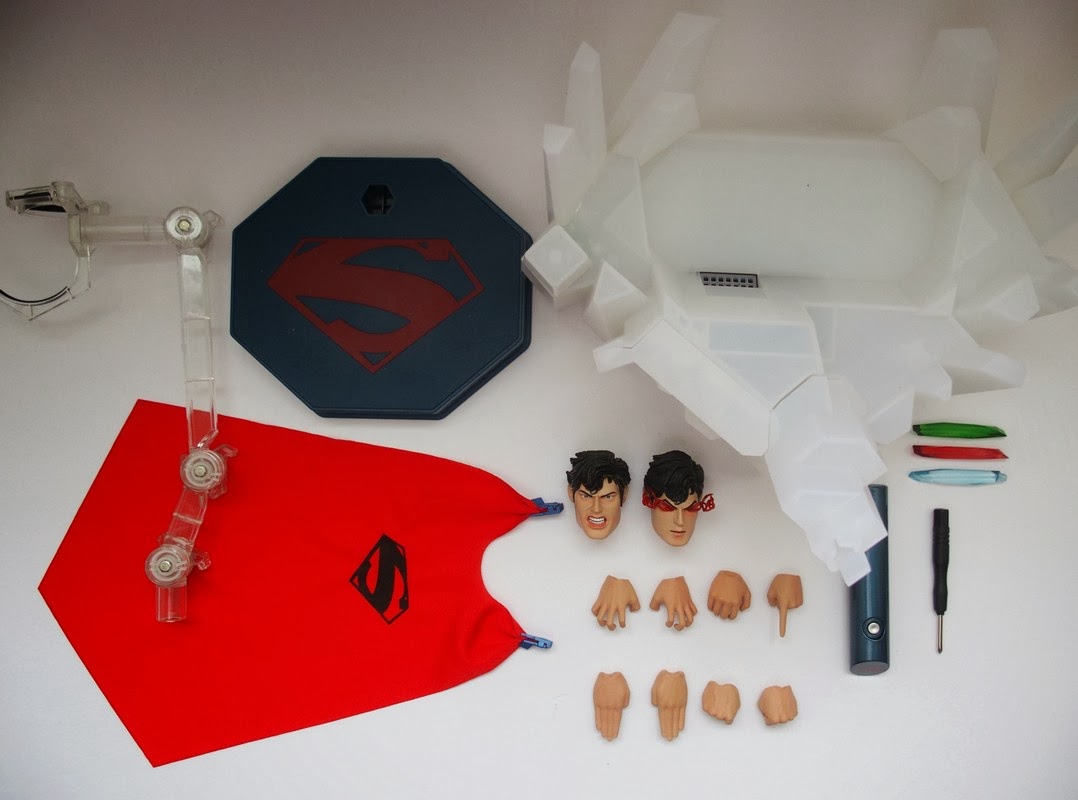 There’s a remote control to active the light-up heat vision head, as well as a mini screwdriver to open the battery compartments with. The exclusive edition comes with three Kryptonian control crystals: red, blue and green. I guess it’s like “press 1 for Marlon Brando, press 2 for Russell Crowe and press 3 for Terrence Stamp.” Yes, General Zod played the disembodied voice of Jor-El in Smallville. 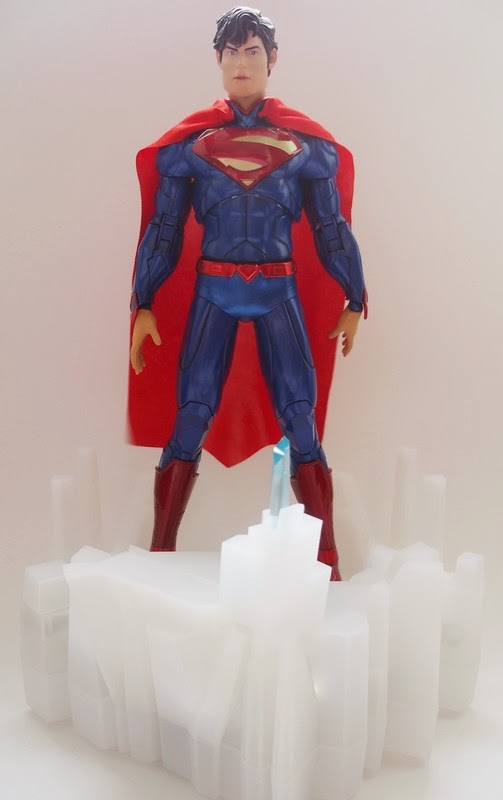 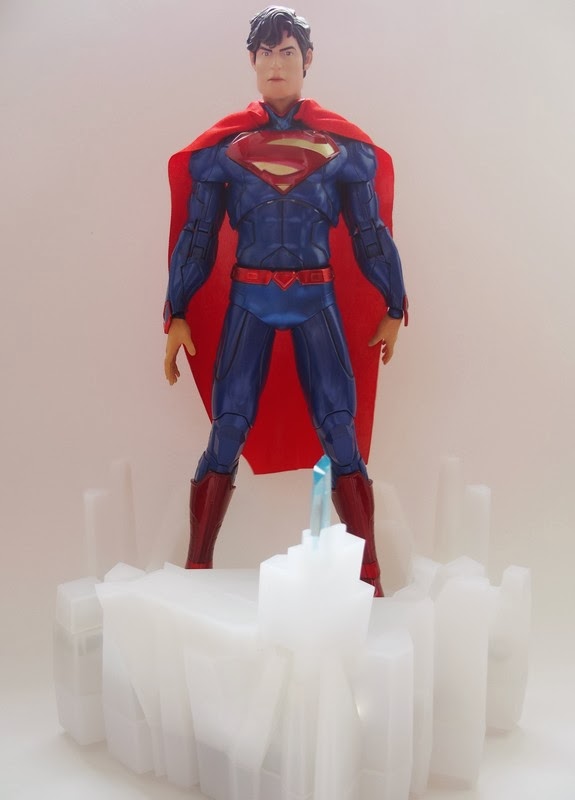 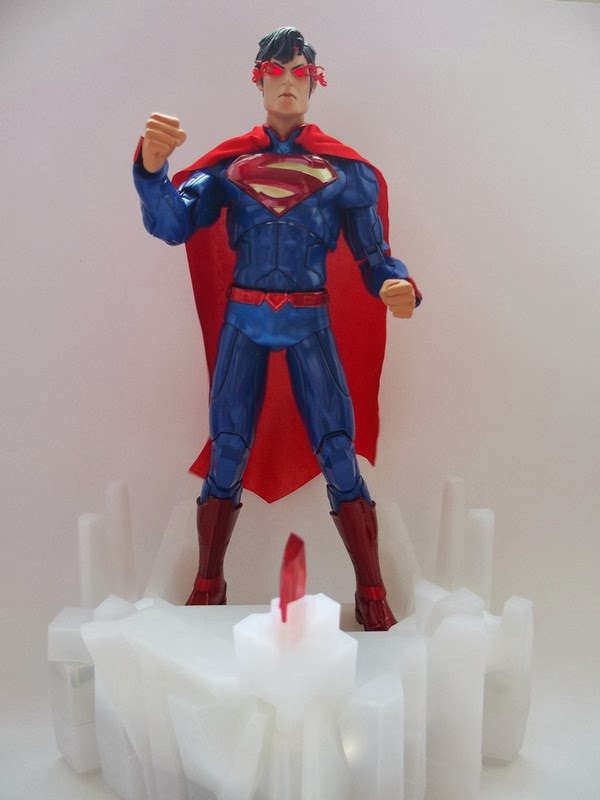 There are two display bases, and the main attraction (besides the figure itself) is the Fortress of Solitude base, which lights up and also has a fan installed in it to blow Superman’s cape up. Some assembly is required and the way the crystals are configured makes it kinda tricky to figure out. Also, it does certainly look much more like plastic than it does crystal or ice. While very neat, the “wind machine” effect isn’t as impressive as it sounds, the cape’s movement in the wind closer to “flutter” than “billow”, really. I think that can be chalked up to it not being a long, majestic cape. That said, it is a very clever display option. The knob to activate the lights and fans is cleverly hidden on the base and looks like part of the crystal structure. There are multiple settings so you can have the fan or lights switched on by themselves or together. 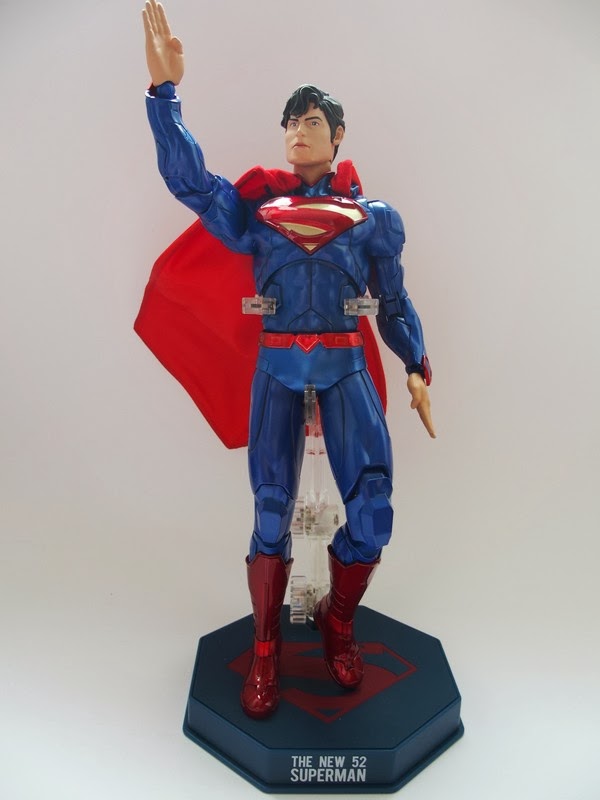 A more traditional figure stand is also included, with a segmented clamp support. Since he’s comprised of so much metal though, this Superman is too heavy to “float” off the stand in any way and the clamp is merely there for support. I managed to have him stay in something of a “taking off” pose.

Play Imaginative has delivered a figure that can compete with the big leagues and the die cast metal construction certainly helps it stand out among the sixth scale crowd. With good accessories, including two extra heads and those four pairs of hands, there are multiple display options and it’s topped off with that really nifty Fortress of Solitude base. There are still some minor kinks (the more I look at the non-wired cape, the cheaper it appears) and the main thing standing in the way of this being a definitive Superman figure is probably the New 52 aesthetic. Then again, this look has its fans and if you number among them, Super Alloy Supes is worth picking up and is probably display centrepiece material. 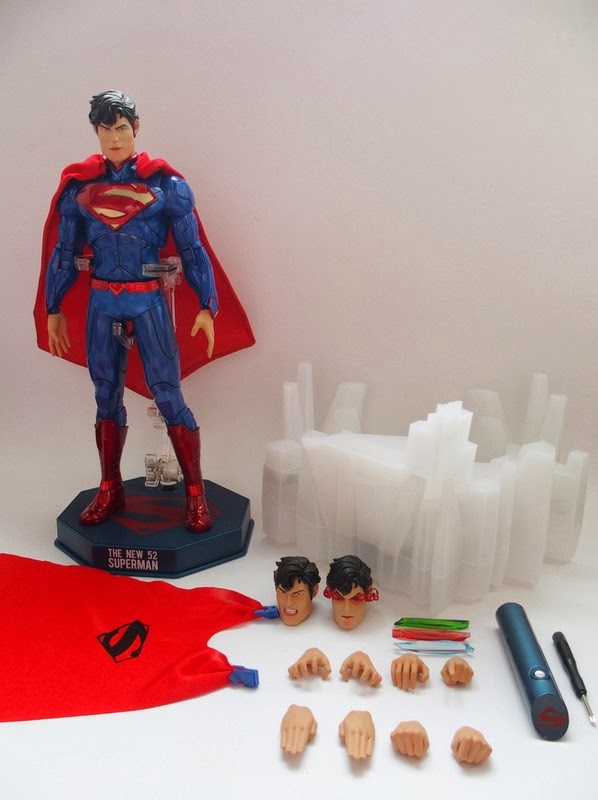