When one thinks of juggernaut musical theatre extravaganzas, the show that immediately comes to mind (apart from the one about a disfigured genius who kills a bunch of people in an opera house) is Les Misérables. Based on Victor Hugo’s 1862 novel, considered to be one of the greatest works of 19th Century literature, the musical was composed by Claude-Michel Schönberg, with French-language lyrics by Alain Boublil and Jean-Marc Natel. After becoming a hit in Paris, an English-language version with lyrics by Herbert Kretzmer premiered on the West End in 1985 at the Barbican Theatre. Weathering some nasty reviews from the British press, the show has gone on to be a worldwide sensation, with touring productions, translations into multiple languages, anniversary gala concerts and a 2012 Oscar-winning film adaptation. Touring productions have previously visited Singapore in 1994 and 1996. 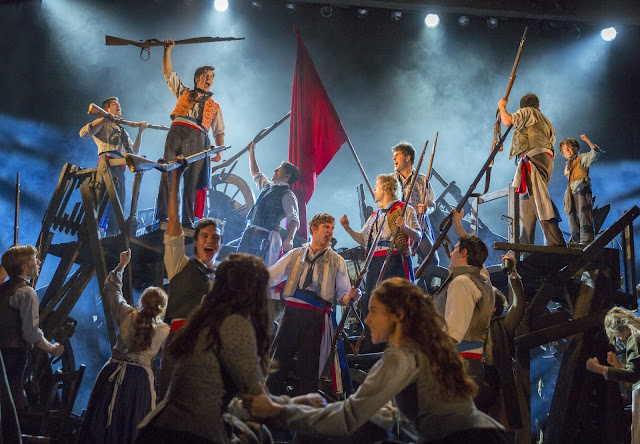 It is 1815, and Jean Valjean is a convict who was sentenced for stealing a loaf of bread to feed his sister’s dying son. Valjean breaks parole to start a new life, eluding the capture of Inspector Javert. Following an encounter with a gracious bishop, Valjean reinvents himself as “Monsieur Madeleine”, eventually becoming the mayor of Montreuil-sur-Mer and a factory owner. Factory worker Fantine gets fired and is forced into prostitution. As she lies dying, Valjean vows to care for Fantine’s daughter Cosette. He rescues Cosette from the cruel innkeeper Thénardier and his wife. Years later, Cosette meets and falls in love with Marius, a dashing young student drawn into a rebellion led by the passionate Enjolras. In the meantime, Thénardier’s daughter Éponine pines for Marius but goes unnoticed. Through all this, Javert continues his relentless pursuit of Valjean, who he sees as no more than “Prisoner 24601”. 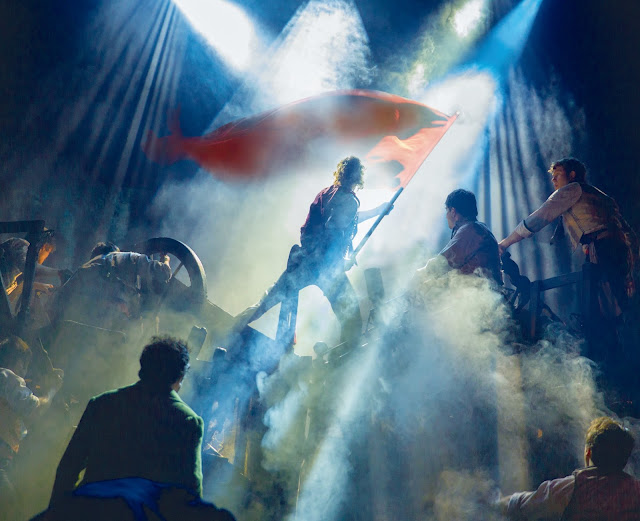 The show has such an in-built following that one has to remember that for audiences who have had no prior exposure to the story in any form, there’s some legwork to be done. While the lush score and exceedingly memorable songs do sweep one up, it’s clear that even at a running time of 3 hours (including intermission), the story has been greatly truncated. There are two major time skips: the story begins in 1815, then skips to 1823, and then further ahead to 1832. Characters reunite out of what seems like sheer convenience –Thénardier even references the serendipity that fuels the plot with the line “Ain’t the world a remarkable place?”. The bulk of the story is set against the 1832 June Rebellion in Paris, but even given spirited speeches from student revolutionary Enjolras, we don’t get all that clear of an idea what exactly they’re rebelling against, apart from vague injustice. 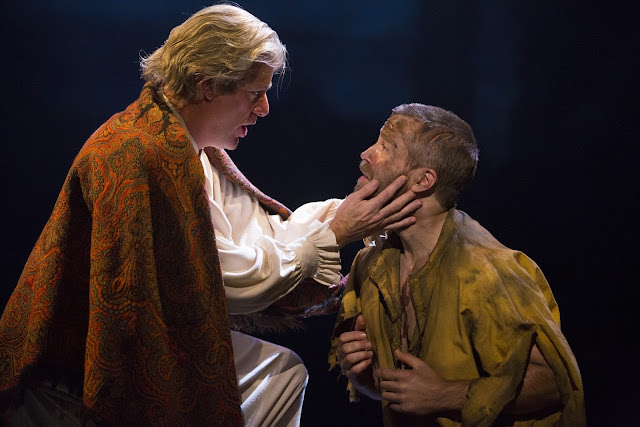 That said, this is still a show with tremendous emotional impact, enhanced by big-budget spectacle. This new production, patterned after the 25th anniversary reworking of the show, features set designs by Matt Kinley, inspired by the original paintings of Victor Hugo. Hugo’s paintings are also worked into the projected backdrops. The multimedia effects include splashing water projected onto the scrim in front of the chain gang rowing away in the galley, as well as 3D animation of the cavernous sewers through which Valjean carries Marius. It’s a tiny bit tacky. The set is detailed and elaborate, with hinged flats swinging open to let in shafts of light; Paule Constable’s lighting design always dramatic. The askew back-alleys do look authentic enough, though the stage does often seem cluttered because so much is going on at once. Fans of the original staging might find themselves missing that turntable once the barricade goes up or pining for the way the sewer scene was originally lit, but there’s still no shortage of awe-inspiring visual splendour in this staging. Also, those gunshot effects are wont to give everyone in the first five rows mild tinnitus. 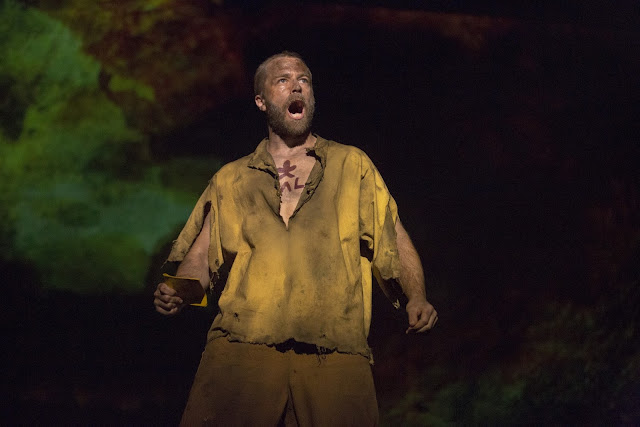 Simon Gleeson’s Valjean is a man who begins as violent and bitter, and through his quest for redemption, never completely shakes that. It’s an interpretation that this reviewer found quite compelling, as Gleeson constantly reminds us that the feral beast with nigh-superhuman strength has never really gone away, and that Valjean is a man who has never been at peace with himself. While he delivers Valjean’s Soliloquy with great conviction, Gleeson has a tendency to go a little shouty during the opening act. His take on Bring Him Home, typically thought of as a tender song, is a little angrier than fans might be used to, but it does work with Gleeson’s characterisation of Valjean. Gleeson has, quite touchingly, said that the moment in each performance he most looks forward to is when Valjean meets little Cosette for the first time. One does get the sense that Valjean is valiantly trying to better himself for the sake of his adopted daughter, and the conclusion of Valjean’s odyssey is both satisfying and heart-rending. 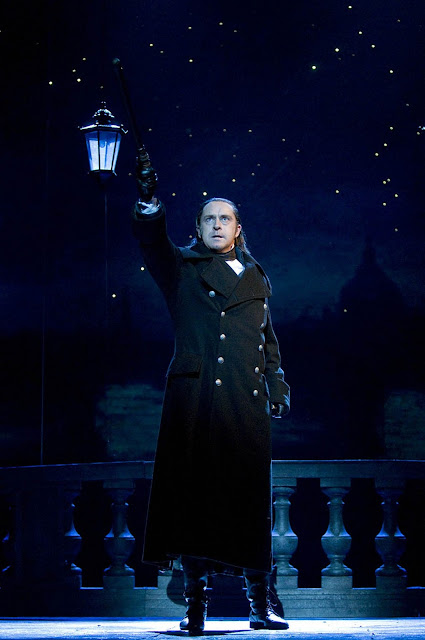 Earl Carpenter reprises the role he’s played on the West End and in other touring productions, the antagonist Javert. The character is driven by a singular obsession and is unwavering in his hunt for the fugitive who has eluded his capture, so it is easy to make him a moustache-twirling villain. Carpenter stays a safe distance away from that, but his Javert is still easy to root against. The superciliousness and condescension that are vital components of the character are very much present in Carpenter’s interpretation, and the actor’s imposing physical stature certainly helps. His take on Javert’s signature tuned Stars is a genuine show-stopper and is one of the best renditions this reviewer has heard. 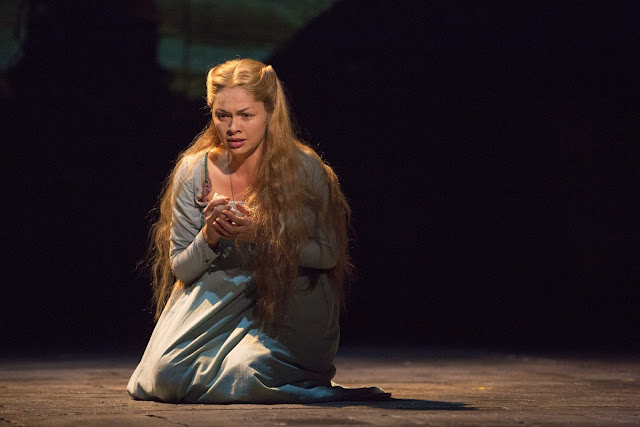 Patrice Tipoki’s Fantine is perfectly serviceable and her rendition of the iconic song I Dreamed a Dream is a decent one, but she ultimately doesn’t plumb the depths of the character’s tragedy, failing to make enough of an impact in her limited time on stage. Incidentally, her sister Laura is the conductor and musical director for this production. 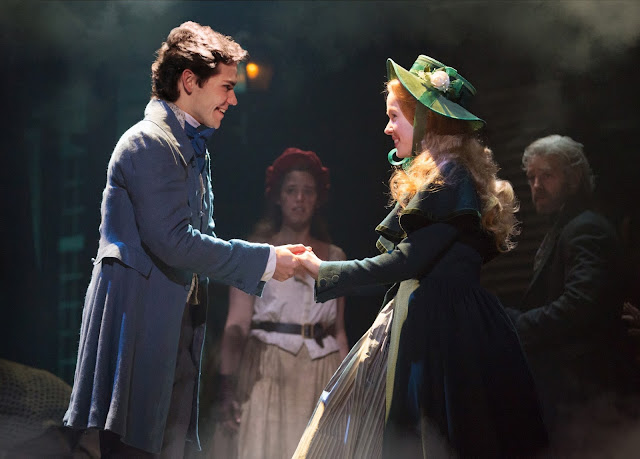 Both Paul Wilkins and Emily Langridge are expectedly pretty in appearance and vocals as Marius and Cosette respectively. The “love at first sight” arc, complete with a meet cute in the town square, will set more than a few eyes rolling. 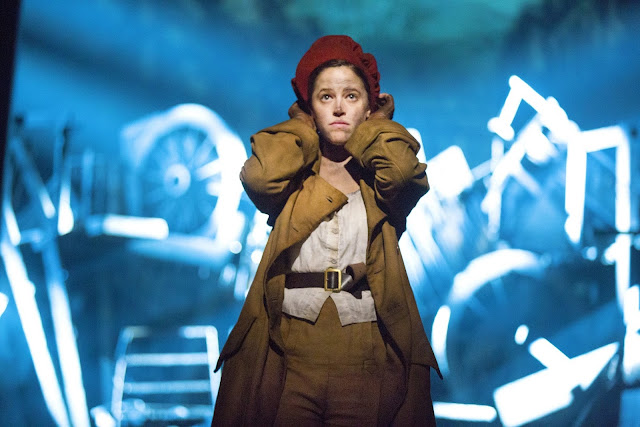 Enter the hypotenuse in our love triangle, everyone’s favourite character Éponine. Kerrie Anne Greenland is plucky and feisty, but is also capable of becoming heart-achingly vulnerable during On My Own and A Little Fall of Rain. Her Australian accent creeps in quite often (listen out for how Greenland sings the word “only”), but it actually adds to ‘Ponine’s charm. She might just be this reviewer’s favourite performer in the show. 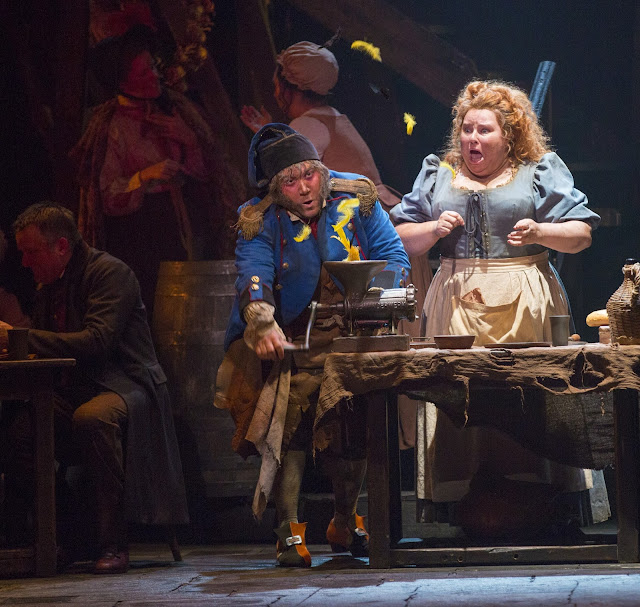 The designated scene-stealers, Mr. and Mme. Thénardier, played by Cameron Blakely and Helen Walsh respectively, with great aplomb. The characters provide much of the comic relief in a relatively downbeat show (it’s there in the title), but also have to possess actual malice and make the audience’s skin crawl. Some of the slapstick in Master of the House is a little too silly, but an elaborate gag involving a blind traveller and his pet bird is downright hilarious. We have to laugh at the Thénardiers and also find them utterly despicable; Blakely and Walsh have got all the bases covered. Over at the barricade, Chris Durling imbues Enjolras with great vigour, but did go off-key a few times while issuing his calls to arms. 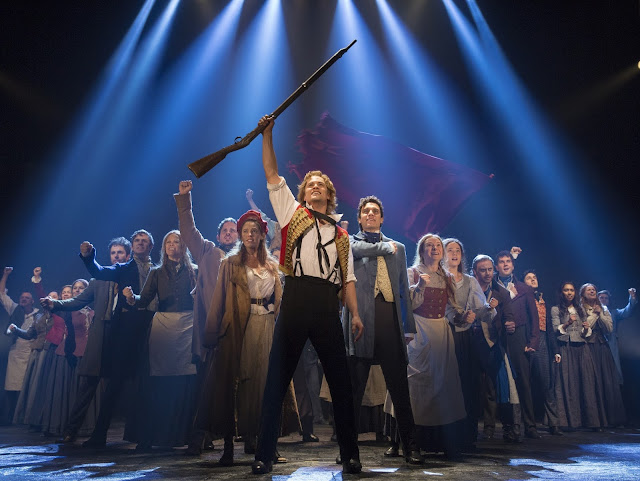 Because of the nature of the 1900-page (in the original French) source novel, Les Misérables might not be a work that’s readily understandable in full, but it is a musical that is easy to connect with. The stirring music, powerful characters and dazzling eye candy stagecraft all make for a thrilling night at the theatre. Despite the long running time, there’s nary a dull moment in this show rife with incident. Rather than pulling one out of it completely, the moments of melodramatics and overall lack of subtlety add considerably to the charm of the show. Those attached to the original staging might bemoan what seems like change for change’s sake, but if you’re experiencing the show for the first time, it will be difficult to resist.

Summary: The storytelling is hampered by various practical limitations and some of the changes in this new production are unnecessary, but there’s no denying that this beloved musical remains a visual and aural treat, with powerful performers leading the cast.